“An accurate, basic understanding of America’s history and philosophy is absolutely critical to our continued ability to talk to each other, build community, and function as Americans,” writes Sheila Suess Kennedy, an Emerita Professor of Law and Public Policy at IUPUI. “When people don’t understand when government can properly impose rules and when it can’t, when they don’t understand the most basic premises of our legal system, our public discourse is impoverished and ultimately unproductive.” | Photo via Wikimedia Commons CC BY-SA 4.0

In 2012, I established the Center for Civic Literacy at IUPUI, based upon the belief that self-government requires a civically educated citizenry. Civic engagement is an important aspect of life in a democracy, and an enormous amount of research confirms that far too many Americans lack even the most basic knowledge needed to make informed public judgments.

It matters. Productive civic engagement is based on an accurate understanding of the “rules of the game” — especially but not exclusively the U.S. Constitution and Bill of Rights — the documents that frame and constrain policy choices in the American system. 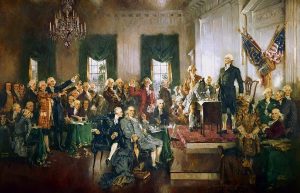 The U.S. Constitution was a product of the Enlightenment, the 18th-century philosophical movement that gave us science, empirical inquiry, and the “natural rights” and “social contract” theories of government, says Kennedy. Illustration by Howard Chandler Christy, via Wikimedia Commons

The American Constitution was a product of the Enlightenment, the 18th-century philosophical movement that gave us science, empirical inquiry, and the “natural rights” and “social contract” theories of government. The Enlightenment did something else: It changed the definition of individual liberty.

We’re told that the Puritans and Pilgrims who settled the New World came to America for religious liberty; what we aren’t generally told is how they defined that liberty. Puritans saw liberty as “freedom to do the right thing” — freedom to worship and obey the right God in the true church, and their right to use the power of government to make sure their neighbors did the same. The Enlightenment ushered in a dramatically different definition of liberty, beginning with the belief that humans are entitled to certain rights just because we’re human — and government has an obligation to respect and protect those inborn, inalienable rights.

The Bill of Rights was intended to protect our inborn rights from overzealous government. It is essentially a list of things that government is forbidden to do. Government cannot dictate our religious or political beliefs, search us without probable cause, or censor our expression, for example — and it can’t do those things even when popular majorities want it to do so. The Bill of Rights only restrains government, and I’m constantly amazed by how many Americans don’t understand the difference between constitutional liberties and civil rights, or — as we’ve seen during the pandemic — the legitimate limits of individual liberty.

Governments create what lawyers call “rules of general application” to protect the common good. Public officials can properly and constitutionally establish speed limits, ban smoking in public places — even require us to wear clothes in public. As Justice Antonin Scalia wrote in Employment Division v. Smith, back in 1990, so long as these and other laws are generally applicable — so long as they aren’t efforts to unfairly target specific groups — they don’t violate the Constitution.

The Bill of Rights is essentially a list of things that government is forbidden to do.

The U.S. Constitution as amended and construed over the years guarantees citizens an equal right to participate in democratic governance and to have our preferences count at the ballot box. Those guarantees are meaningless in the absence of sustained civic engagement by an informed, civically literate citizenry. Let me say that a different way: Protection of our constitutional rights ultimately depends upon the existence of a civically informed electorate.

There are plenty of gray areas in constitutional law — plenty of situations where informed people of good will can come to different conclusions about what the Constitution requires. But by and large, those aren’t the things Americans are arguing about. The inability to engage in productive civic conversation is, among other reasons, an outgrowth of declining trust in our government, writes Kennedy. But in order to trust government, “we have to understand what it is and isn’t supposed to do.” | Limestone Post

America’s political culture is the most toxic it has been in my lifetime. (And I’m old.) There are lots of theories about how we got here — from partisan gerrymandering and residential sorting to increasing tribalism to fear generated by rapid social and technological change. But our current inability to engage in productive civic conversation is also an outgrowth of declining trust in our social and political institutions — primarily government. Restoring that trust is critically important — but in order to trust government, we have to understand what it is and isn’t supposed to do. We have to understand how the people we elect are supposed to behave. We need a common understanding of what our constitutional system requires.

An accurate, basic understanding of America’s history and philosophy is absolutely critical to our continued ability to talk to each other, build community, and function as Americans, rather than as members of rival tribes competing for power and advantage. Unfortunately, that civic knowledge is in very short supply.

Let me share an illustrative anecdote. When I taught Law and Public Policy, I began with the constitutional architecture and what legal scholars mean by “original intent.” I would ask students something like “What do you suppose James Madison thought about porn on the internet?” Usually, they’d laugh and then we’d discuss how the Founders’ beliefs about free expression should guide today’s courts when they are faced with efforts to censor media platforms those Founders could never have imagined. But several years ago, when I asked a college junior that question, she looked at me blankly and asked, “Who’s James Madison?”

Civic ignorance matters, because constitutions address the most basic question of any society — how should people live together? What should the rules be, how should they be made, who should get to make them, and how should they be enforced? In America, citizenship wasn’t based upon geography, ethnicity, or conquest, but on an Idea, a theory of social organization, what journalist Todd Gitlin called a “covenant.” The most revolutionary element of the American Idea was that it based citizenship on behavior rather than identity — on how you act rather than who you are.

The great debates between the Federalists and Anti-Federalists were about the proper role of government. We’re still having that debate. The overarching issue is where to strike the balance between government power and individual liberty.

The issue, in other words, is: Who decides? Who decides what book you read, what prayer you say, who you marry, whether you procreate, how you use your property? Who decides when the state may justifiably deprive you of liberty — or tell you to wear a mask? 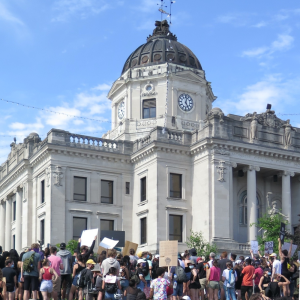 Government cannot dictate our religious or political beliefs, search us without probable cause, censor our expression, or prohibit the right to assemble peaceably — “even when popular majorities want it to do so,” writes Kennedy. | Limestone Post

In our constitutional system, individuals have the right to make their own political and moral decisions, even when lots of other people believe those decisions are wrong. What they don’t have is the right to harm or endanger others, or the right to deny equal liberty to people with whom they disagree. Drawing those lines can be difficult; it’s impossible when citizens don’t understand our history — how we got here — or the basic “rules of the game.”

When people don’t understand when government can properly impose rules and when it can’t, when they don’t understand the most basic premises of our legal system, our public discourse is impoverished and ultimately unproductive.

Like all human enterprises, governments will have their ups and downs. In the United States, the consequences of “down” periods are arguably more serious than in more homogeneous nations, precisely because this is a country based upon an Idea. Americans don’t share a single ethnicity, religion, or race. Culture warriors to the contrary, we never have. What we do share is a set of values, a set of democratic institutions and cultural norms, a legal system that emphasizes the importance of fair processes — and when our elected officials aren’t obeying those norms, when they are distorting and undermining the underlying mechanics of democratic decision making, our democracy is endangered.

There will always be disagreements over government actions and policies. But there are different kinds of discord, and different kinds of power struggles, and they aren’t all equal. When we argue from within a common understanding of what I call the constitutional culture — when we argue about the proper application of the American Idea to new situations or to previously marginalized populations — we strengthen our bonds, and learn how to bridge our differences. When widespread civic ignorance allows dishonest partisans to rewrite our history, pervert our basic institutions, and ignore the rule of law, we not only undermine the Constitution and the American Idea, we erode the trust needed to make democratic institutions work.

Sheila Suess Kennedy is Emerita Professor of Law and Public Policy at the School of Public and Environmental Affairs at Indiana University–Purdue University Indianapolis. Until her retirement in December 2020, she was a Faculty Fellow with both the Center for Religion and American Culture and the Tobias Center for Leadership Excellence, an adjunct professor of political science, and founder of the Center for Civic Literacy at IUPUI. In 1980, she was the Republican candidate for Indiana’s then 11th Congressional District seat. She served as Executive Director of the Indiana Affiliate of the American Civil Liberties Union. She is the author of nine books, which can be found on her website, sheilakennedy.net. She has been a columnist for the Indianapolis Star, Inequality.org, The Indiana Word, and the Indianapolis Business Journal. Professor Kennedy blogs daily at sheilakennedy.net and is a frequent contributor to other blogs and periodicals. Sheila and her husband Bob have five grown children and four perfect grandchildren.
Tagged
Comments