To vote in person, either early or on election day, you will need an ID issued by the U.S. or Indiana government.

This voting guide was compiled by Debora Shaw from the League of Women Voters of Bloomington-Monroe County, which has partnered with Limestone Post on a series of articles on civic engagement.

In Indiana you must register to vote at least 30 days before Election Day. You must:

1. Be a citizen of the United States.

2. Be at least 18 years old on or before the next general, municipal, or special election.

3. Have lived in your precinct for at least 30 days before the next general, municipal, or special election.

4. Not be currently imprisoned after being convicted of a crime.

The most reliable way to be sure your information is correct is to register online at the Voter Portal at indianavoters.in.gov. This site is available for anyone who has an Indiana Driver’s License or Indiana State Identification Card. You can check your voting registration status at that site, too. 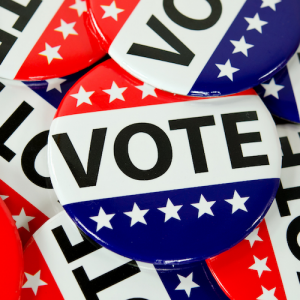 Primary elections are how political parties choose their candidates. Voters are required to declare a party affiliation and will see on the ballot only the candidates in their party. Because of gerrymandering (drawing boundaries of election districts to reduce partisan competition within a district), the primary can be the election that chooses the eventual winner of the general election.

Take your government-issued photo ID to vote at your local precinct on Election Day, 6:00 a.m. to 6:00 p.m. Click here for a list of Monroe County precincts and polling locations.

You do not need to declare a party affiliation and can vote for any candidate in each race.

If you vote in person (early or at the polls), you will need an ID issued by the U.S. or Indiana government that includes the following:

1. Your name. The ID name must “conform” to the name on the registration. They may vary in fullness of the name, use of initials, etc., but should be recognizably the same.

3. An expiration date that is after the date of the last general election.

Early in-person voting is available for four weeks (28 days) before the elections. (Indiana calls this “absentee in-person” voting.) In Monroe County, you can vote early at Election Operations (the former NAPA building, 302 S. Walnut St. at the southwest corner of 3rd Street).

Voters with one of the state’s 11 reasons to vote absentee can vote by mail. The reasons include being absent from the county on Election Day, having a disability, being at least 65 years of age, and being scheduled to work at your regular place of employment during the entire 12 hours that the polls are open. (See all 11 reasons at the end of this article.)

Applications for mail-in ballots are due by April 21 (primary election) and October 27 (general election). You can apply online at indianavoters.in.gov.

Make the most of your vote — learn about the candidates and issues on the ballot. The League of Women Voters has an online voter guide, called VOTE411, where all registered candidates for an office are invited to respond to the same set of questions. Learn more at vote411.org/indiana.

This voting guide was compiled by Debora Shaw from the League of Women Voters of Bloomington-Monroe County.

In Monroe County, you can vote early at Election Operations, 302 S. Walnut St. on the southwest corner of 3rd Street (the former NAPA building). | Limestone Post

To vote absentee-by-mail in Indiana, a voter must be able to personally mark their own ballot and sign their name to the completed ballot security envelope and have a reason to request an absentee vote-by-mail ballot:

1. You have a specific, reasonable expectation that you will be absent from the county on Election Day during the entire twelve hours that the polls are open (6 am until 6 pm).

2. You have a disability.

4. You will have official election duties outside of your voting precinct.

5. You are scheduled to work at your regular place of employment during the entire 12 hours that the polls are open.

7. You are prevented from voting because of a religious discipline or religious holiday during the entire 12 hours that the polls are open.

8. You are a participant in the state’s address confidentiality program.

9. You are a member of the military or a public safety officer.

11. You are prevented from voting due to the unavailability of transportation to the polls.

A voter applying for an absentee-by-mail ballot does not need to present proof of identification. However, a first-time voter in Indiana who registered to vote by mail and did not provide proof of residency will be asked to include that evidence with their absentee balloting materials. This can be a state-issued ID where the address matches their registration, but can also be a bank statement, utility bill, etc.

Finally, a voter does need to file an application before each election for which the individual wants to vote absentee-by-mail.

Visit this page on in.gov for instructions on how to apply for a vote-by-mail ballot.

Click here for the Monroe County precincts and polling locations.

Debora Shaw is the co-chair of Voter Services for the League of Women Voters of Bloomington-Monroe County, a local chapter of LWV-US. The League of Women Voters is a nonpartisan, grassroots organization that works to protect and expand voting rights and ensure everyone is represented in our democracy. LWV empowers voters and defends democracy through advocacy, education, and litigation at the local, state, and national levels.
Tagged
Comments