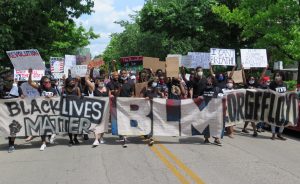 Limestone Post published a photo gallery and article on the peaceful march and protest, called ‘Enough Is Enough,’ that was held on June 5 in Bloomington in response to nationwide police brutality against Blacks and other people of color. Organizers emphasized that, although people’s energy at the event was encouraging, the fight for racial justice will be an ongoing battle. | Limestone Post

Publisher at Limestone Post
Ron Eid started Limestone Post Magazine with Lynae Sowinski in 2015 as an online publication featuring long-form stories about the arts, outdoors, social issues, and a variety of other topics relevant to Bloomington and south-central Indiana. An award-winning writer and editor, Ron has written feature stories about the arts, culture, sports, business, and adventure travel for publications across the country. He can be reached at [email protected]
Tagged
Comments