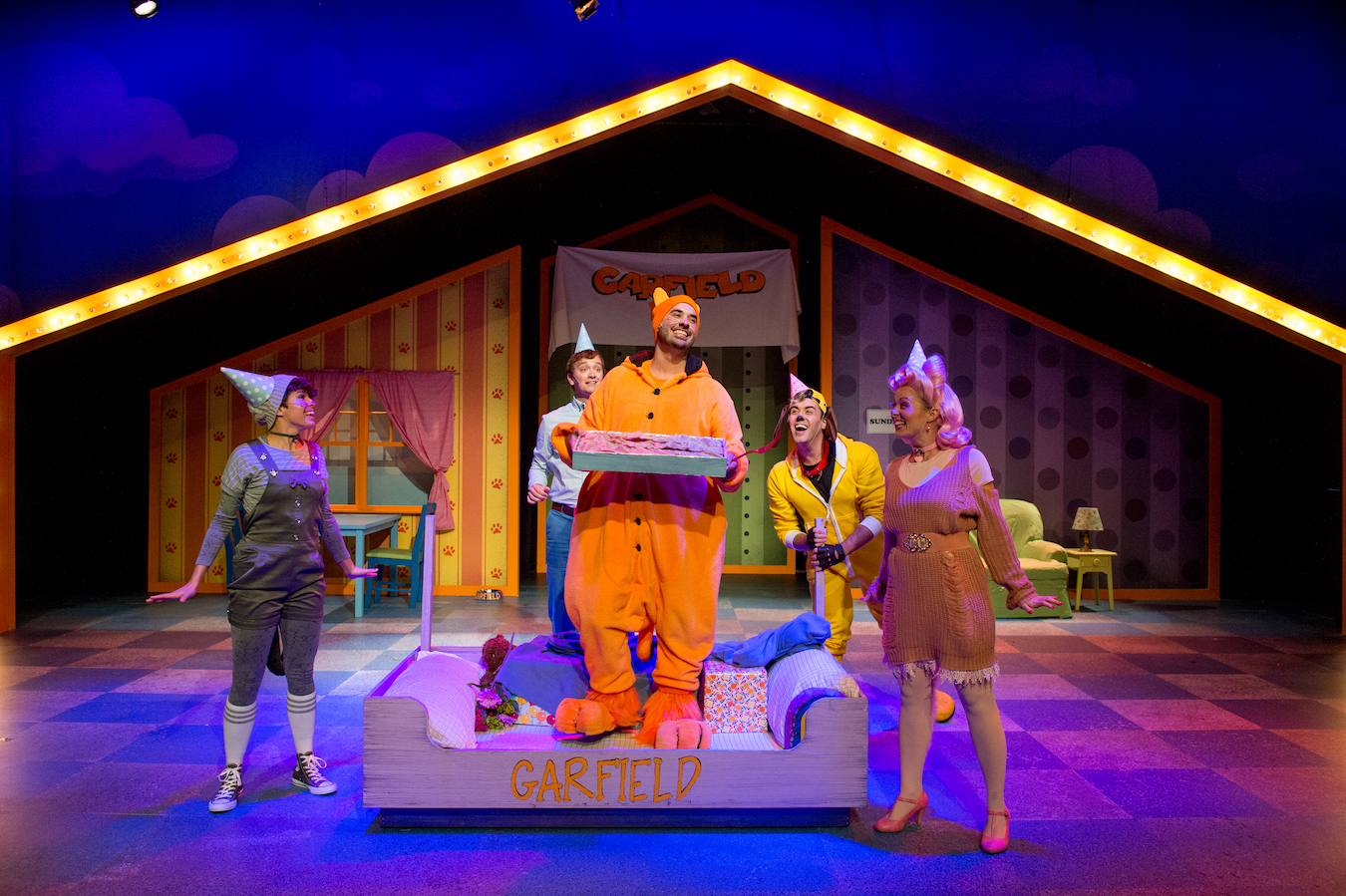 Garfield gets his cake (and definitely eats it) in Cardinal Stage Company's first Cardinal for Kids performance of the 2017-18 season, 'Garfield: The Musical With Cattitude.' | Photo courtesy of Blueline Media Productions

Garfield, the sardonic feline, is known for his fondness for food, sleep, and tormenting Jon and Odie, and in Cardinal Stage Company’s Garfield: The Musical with Cattitude, which runs from September 8-24 at the Ivy Tech John Waldron Arts Center, a day of lounging around is his idea of a perfect birthday — that is, until his frenemies forget about his special day.

Taking matters into his own hands, Garfield embarks on a fun-filled adventure for Cardinal Stage’s first Cardinal for Kids production of the season, featuring the lovable characters from Jim Davis’ classic comic strip: the cynical cat himself; his oblivious roommates, Jon and Odie; his nemesis, Nermal; and his on-and-off girlfriend, Arlene.

The play was co-written by Michael J. Bobbitt, artistic director of Adventure Theatre MTC, and Garfield creator Jim Davis. The music and lyrics were written by John L. Cornelius II, who not only gained popularity as music director at the Adventure Theatre but also for works such as Three Little Birds, an adaptation of Bob Marley’s catalog into a modern fairytale.

This wasn’t the first time the idea of a Garfield-inspired play had been pitched, but the combined talents of all three made it happen.

“On two separate occasions we had opportunities to do a stage production with Garfield but they just didn’t pan out,” Davis says. “Then came along the opportunity to work with Michael Bobbitt, and the result is this stage play. “I could not be happier with how it turned out. It’s funny and it’s got heart. That’s all I could ask for in a play.”

While Cardinal Stage conducts its search for an artistic director, Micah-Shane Brewer will guest direct Garfield. An East Tennessee native, Brewer is the founding artistic director of the Encore Theatrical Company in Morristown, Tennessee. In his 11 years with Encore, Brewer has directed productions including Ragtime, The Bridges of Madison County, The City of Conversation, Mary Poppins, Follies, and One Man, Two Guvnors. Cast members, left to right, Ashley Dillard, Anna Butler, Chris Krenning, along with a furry friend, at Pridefest on August 26.

Bringing the lovable yet moody cat to life in his Cardinal Stage debut is Chicago-based actor Jason Slattery. Slattery will work alongside Cardinal Stage veteran Reid Henderson playing the role of Garfield’s owner, Jon Arbuckle. Henderson has performed in four other Cardinal Stage productions, including Mary Poppins, Elephant and Piggie, King Charles III, and A Year with Frog and Toad, as well as in several other shows in New York and New Jersey.

Other actors making their Cardinal Stage debut include Chris Krenning, who will play Garfield’s carefree roommate Odie, and Anna Butler as Garfield’s foe, Nermal. Garfield’s love interest, Arlene, will be played by Ashley Dillard, who has performed in a number of shows for IU Theatre and IU Summer Theatre, as well as one for Cardinal Stage, Brighton Beach Memoirs.

A Garfield production in Indiana is very fitting, as the grumpy feline has a long history in the state — not only because creator Jim Davis lives in Muncie, but also because Garfield is rumored to be based on one of Davis’ childhood farm cats. Davis, who currently teaches at Ball State University, is still very involved with the comic strip, which has been running since 1978. In fact, the Guinness Book of World Records named Garfield the most widely syndicated comic strip in the world — as of 2013, it appeared in around 2,580 newspapers and journals.

“The single greatest moment of my career was getting the call from the syndicate saying they wanted to pick up Garfield,” Davis says. “After that I dreamed maybe someday there’d be a book, or in my wildest dreams, a TV special. But no, I never guessed that Garfield would become as popular as he has.”

Now that Garfield has appeared on comic strips, television, the big screen, and stage, as well as countless merchandise, it would seem that the cat has nowhere else to go, but a recent agreement has been made with the first Six Flags theme park in China for Garfield to be the theme of the children’s area, due to the character’s popularity there. In addition, another Garfield animated movie is in the works, which is expected to be several years in the making.

While Garfield’s brand is ever-growing, it seems the lazy cat’s antics on the page will remain the same. “I do not anticipate any sort of significant departure in Garfield’s narrative going forward,” Davis says. “But sometimes Garfield dictates to me, so I’ll have to wait and see.”

Continuing its practice of giving back to the Bloomington community, Cardinal Stage has partnered its Garfield production with the Monroe County Humane Association (you can read more about Cardinal Stage’s partnership with MCHA here). Previously, Cardinal Stage raised over $5,000 for My Sister’s Closet and over $3,500 for Bloomington PRIDE, and this year it will hold special events for attendees to meet the MCHA’s VIPaws Therapy Animal Teams. Guests will have the opportunity to meet the cats, dogs, and other animals on the VIPaws team before the first and last performances of Garfield, held at 6 p.m. on September 8 and 1 p.m. on September 24 at the Ivy Tech Waldron Auditorium. Those unable to attend can visit with the Garfield cast and MCHA crew during a morning of pet ownership education at WonderLab Museum of Science, Health and Technology at 10 a.m. on September 16.