Landlocked Music has hosted about 50 in-store performances since it opened in 2006. Lee Ranaldo (left) of Sonic Youth and Alan Licht played at Landlocked in 2012. Ranaldo also recited a poem about Bloomington that he had written in 1991. | Photo by Jeremy Hogan

“Jon had — I’m not sure how many gongs. Seven?” laughs Landlocked Music co-owner Heath Byers. Sitting alongside unpacked record and CD boxes in the back office of the music store’s new location at 115 South Walnut Street, Byers is describing an in-store performance at Landlocked from late March. Jon Mueller, an experimental percussionist, visited as part of a new season of sorts for this local institution that sells vinyl, CDs, and cassettes in all genres. Landlocked moved earlier this year from the store’s longtime home on North Walnut. 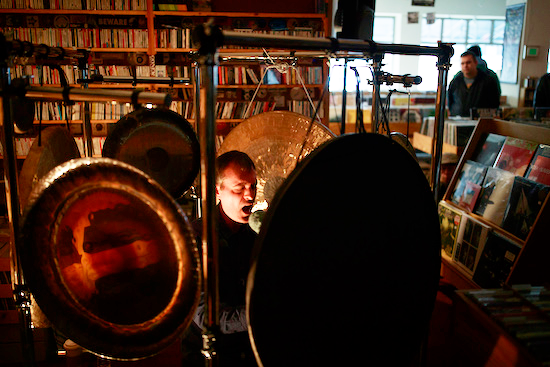 Percussionist and composer Jon Mueller performed at Landlocked in March. This type of experience is “the sort of thing that just wouldn’t work very well in a bar or a club,” says Landlocked co-owner Heath Byers. | Photo by Jeremy Hogan

But back to the gongs. “So seven gongs, of varying sizes and sounds,” says Byers. “And his performance was one long meditation. He encouraged the audience to not so much watch him as just be present, and soak it in, basically.” This slowed-down and sensory experience was, according to Byers, “the sort of thing that just wouldn’t work very well in a bar or a club.”

Landlocked Music first opened in 2006 across the street from Third Street Park, before moving just off the downtown Square. Over the past 13 years, the store has hosted approximately 50 free live music shows, not to mention the yearly Record Store Day event that includes DJs, limited-edition releases, and a line that typically snakes down the street prior to opening. “We opened in March of 2006, and the first thing that ever happened in our store was [Bloomington band] The Impossible Shapes,” says Byers. “And then quickly, seemingly, we became a spot where performing artists on the road would regularly seek us out for shows because, I don’t know, there weren’t the right venues for music at the time.” Second Story, a longtime venue for small independent bands, had ground to a halt in late 2006 after several years of stops and starts. The Bishop wouldn’t open for another three years. For experimental and indie acts, it was a period when it felt like Bloomington was, as local writer Jim Manion has put it, “venue short.” 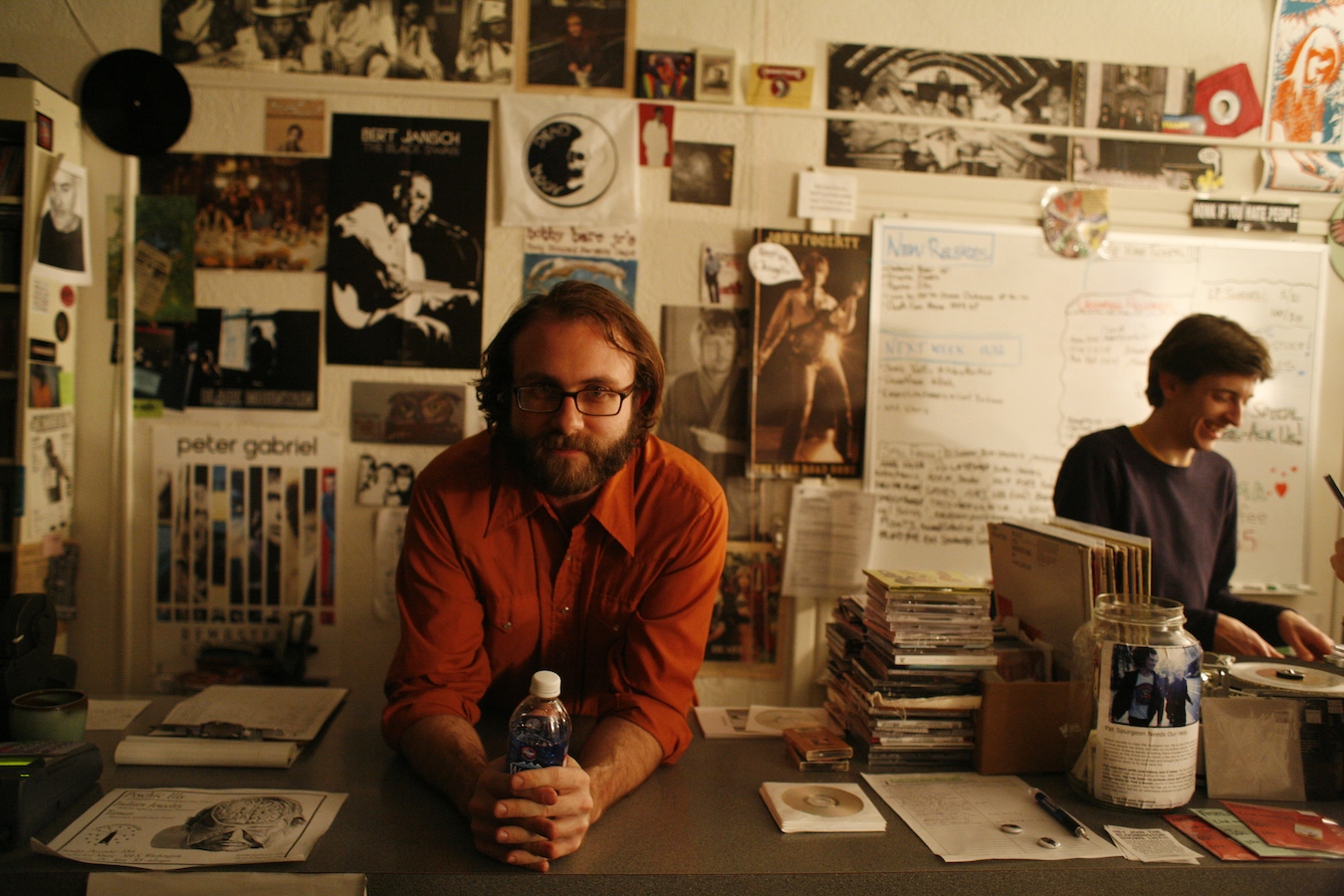 Music stores often develop close relationships with record labels and artists. As Byers and co-owner Jason Nickey got to know label representatives and the bands on tour that would stop in at the store on their day off, they accumulated contacts that allowed them to showcase a wide variety of artists. Byers rattles off a list of highlights that includes a number of major indie artists, like Kurt Vile, Tune-Yards, and the late Richard Swift. One staff favorite was Sonic Youth guitarist Lee Ranaldo, who recited his 1991 poem about Bloomington during his acoustic set in 2012 (the signed poem is displayed across from the register at Landlocked, and the performance is on YouTube). Byers remembers having to drive out into the country to borrow two or three acoustic guitars for Ranaldo from Dave Baas, owner of Roadworthy Guitar and Amp. Byers also had to plead for Baas’s help in tuning the guitars. “Lee was super happy,” Byers says. “He ended up buying one of the guitars off of Dave.” Byers also recalls that Steve Shelley, also of Sonic Youth, played percussion on a dense cardboard record box. 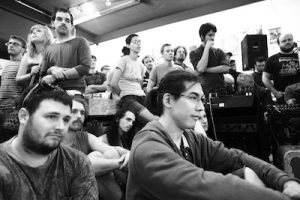 An acoustic show with half of Sonic Youth is certainly a unique experience, one that could only be created by the limitations inherent in performing in a non-traditional venue. For Nickey and Byers, who have invested in a 4-channel mixer, PA, and microphones over the years, this makes managing live events both exhilarating and stress-inducing. Also delicate is timing for touring bands. One memorable show was with songwriter Will Oldham, also known as Bonnie “Prince” Billy, who in 2009 was slated to play a concert at the 600-seat Buskirk-Chumley Theater. Landlocked was able to book Oldham for an in-store performance scheduled on the morning after the show, but it was confirmed with less than 48 hours’ notice, and Byers and Nickey were told by Oldham’s label, Drag City, to not advertise the visit until the Buskirk show was underway. After frantically handbilling at the theater and spreading the word online, the Landlocked owners hoped for the best. The next morning, Oldham turned up in head-to-toe green with Dirty Three drummer Jim White for the so-called “Breakfast with Bonnie ‘Prince’ Billy.”

“It was completely packed,” says Byers. 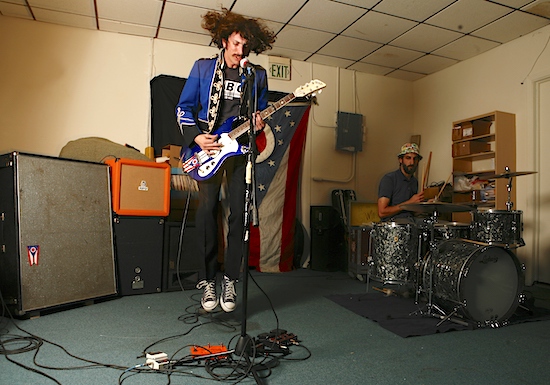 In 2006, Swearing at Motorists (Dave Doughman, guitar; Joseph Siwinski, drums), once called “The Two Man Who,” was one of the first bands to play at Landlocked. The band’s records were released by Bloomington label Secretly Canadian. | Photo by Jeremy Hogan

Having attended many in-stores over the years (in fact, I even played at Landlocked’s second location for a local record release many years ago), I can attest that there’s something special about this type of event. If you’re a bit shy, you can use the potentially excruciating social time before and between performances to browse records and cozy up to the listening station. Green room spaces aren’t often available in cramped record stores, so if you’re used to seeing musicians play only at clubs, bars, or theaters, it feels sweetly intimate to see a favorite artist browsing next to you. In college I worked at the Bloomington music store Tracks, which at the time often hosted hip-hop in-stores, and I remember how strange it was to see the GZA or Method Man chatting with fans, leaning on the very same counter where we priced used CDs. As Byers notes, it can also be more accessible to host live music in a space that is all-ages. While they typically book only touring artists, the store has hosted local bands occasionally over the years as a “no-barriers” record-release venue where families or the children of band members can enjoy a casual afternoon show.

Those interested in this kind of low-stress musical event, held among the long wooden shelves of vinyl records, can mark their calendars for May 1 at Landlocked. Avant-folk songwriter Kath Bloom will play from 6 to 8 p.m., with local songwriter and Rodeola frontwoman Kate Long as the opening act. I spoke with Bloom earlier this year about her long and rambling career. “I guess I write out of pain,” said the Connecticut-based Bloom. “I write out of confusion. And sometimes, out of happiness. I don’t set out to write about anything in particular really, just what comes to me.” What often comes to Bloom in her decades of songs is the experience of romantic and familial love, both simple and infuriatingly complex. This naked poetry, sung in a wild voice that seems perpetually on the edge of either breakdown or ecstasy, was a potent tool in Bloom’s early collaborations with the avant-garde guitarist Loren Mazzacane Connors. The textured playing by Connors lent a cagey reserve to Bloom’s openness, and their records from the late ’70s and early ’80s, like the recently re-released Restless Faithful Desperate, earned Bloom the kind of cult psychedelic-folk following afforded to enigmatic musicians like Karen Dalton and Michael Hurley. 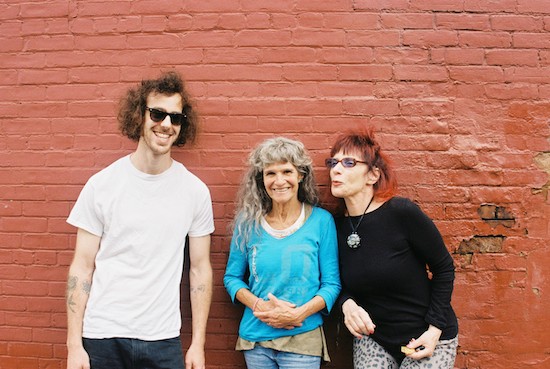 Bloom never stopped writing music for guitar in the decades that followed, as she raised her children and lived a scrappy existence in Florida. Acclaim trickled in over time — most famously, her song “Come Here” was prominently featured in the 1995 Richard Linklater film Before Sunrise. Eventually, Bloom began to dip her toe back into releasing and performing music. In 2009, a spate of covers by artists like Bill Callahan, Scout Niblett, Josephine Foster, and Devendra Banhart on the Chapter Music tribute album Loving Takes This Course led to deeper connections with patrons and collaborators, including Mark Kozelek, who released Bloom’s music on his label, Caldo Verde.

Her folk rock pedigree, along with a deliciously squirrelly back catalog of obscure releases, makes Bloom a fitting candidate for performing at a venue like Landlocked. “I think [Bloom] potentially has broad appeal and is potentially very Bloomington, whatever that means,” says Byers. And being very Bloomington is, of course, part of the goal. Landlocked was recently awarded a small, yearlong Bloomington Urban Enterprise Association (BUEA) Zone Arts Project Grant to support their work presenting live music from touring acts. Byers is quick to stress that even with this support, Landlocked continues to be highly selective about what events they are able to facilitate. “We get asked a lot and we say no a lot. … We can’t stack shows on top of one another without losing our minds,” he says. Byers notes that when he first began to look at the guidelines for the BUEA grant, he realized that Landlocked Music had already been doing something worthwhile for the community. “So why not legitimize it a little more?” he says.

A portion of this story was previously published in the Indy Week.

Josephine McRobbie is a freelance writer, audio producer, and cultural documentarian born in Australia and now based in Durham, North Carolina. She holds degrees in Journalism, Library Science, and Ethnomusicology from Indiana University. Over the years she has worked at a variety of arts and history-focused organizations, including Traditional Arts Indiana, the Southern Historical Collection, and the IU Libraries Moving Image Archive. She can often be found teaching yoga, enjoying trail runs, and writing and recording music.
Jeremy Hogan

Jeremy Hogan is an award-winning photographer based in Bloomington, Indiana. Born and raised in California, he began freelancing for newspapers while still in high school. He is a 1997 graduate of the photojournalism program at San Jose State University and has a bachelor’s degree in journalism. He worked for The Herald-Times newspaper in Bloomington until January 2019. His freelance work is represented by Polaris Images for still photography, and he’s a contributing filmmaker to Getty Images. Among many other projects, Jeremy is currently making a documentary film about Vietnam veterans from his father’s combat unit during the war.
Tagged
Comments