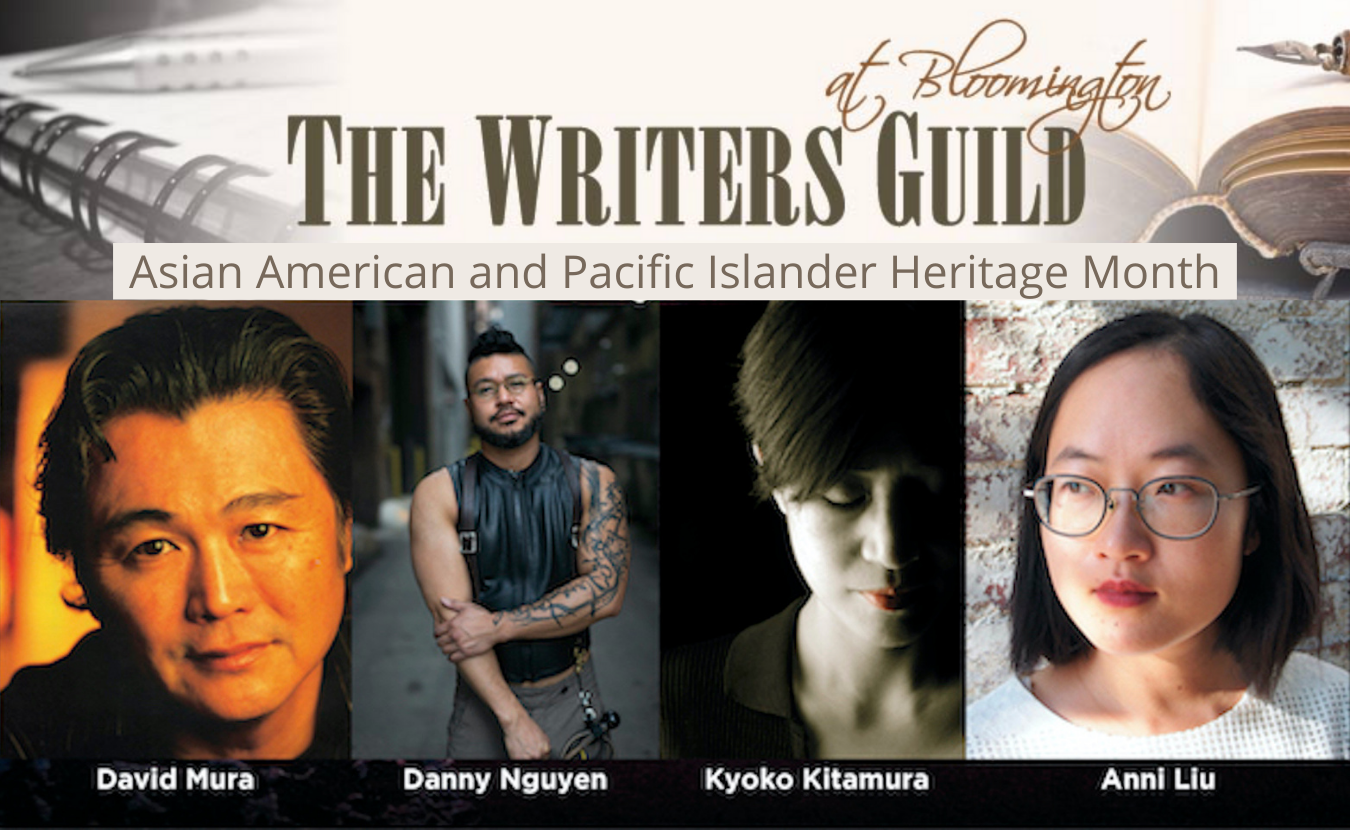 Recent mass shootings have ignited conversations about “the precarious ambiguity about what it means to be Asian American,” says Hiromi Yoshida, a freelance writer, editor, and diversity consultant for the Writers Guild at Bloomington. For Asian American and Pacific Islander Heritage Month in May, the Writers Guild will feature four Asian American performers for the virtual edition of its First Wednesdays Spoken Word Series on May 5. “To be Asian, however American, is dangerous in this volatile post-Trump era,” Hiromi writes. | Courtesy images.

We grieve for the families of Atlanta,

especially the children, how their mothers

won’t live to see them achieve

the hopes of our ancestors

who believed in gold…

Responding to the Atlanta spa shootings, Asian American poet Lisa Kwong read these lines from her original poem, “An Asian American Elegy for Atlanta,” at the Justice for AAPI online vigil on 23 March 2021. Sponsored by the City of Bloomington in collaboration with the Indiana University Asian Culture Center and the Office of the Vice President for Diversity, Equity, and Multicultural Affairs, the vigil was one of numerous organized responses to the shootings that activated national consciousness about the value of Asian lives.

The shootings also unleashed #StopAsianHate hashtags and ignited conversations about the precarious ambiguity about what it means to be Asian American. To be Asian, however American, is dangerous in this volatile post-Trump era when people of Asian descent have been hatefully stigmatized as coronavirus carriers. This volatile, discursive climate has also rehashed debates about gun control and hate crime legislation — conversations that continue to heat up after the Indianapolis FedEx shooting.

In response to the Atlanta and Indianapolis shootings, and to the numerous other reported acts of violence against Americans of Asian descent, #StopAsianHate will predictably be the focus for this year’s Asian American and Pacific Islander Heritage Month. At the same time, the unique contributions of Asian American poets, writers, artists, and musicians will be celebrated nationwide throughout this year’s AAPI Heritage Month in May.

Here’s a brief introduction to the performers. Click on their names to learn more about them. 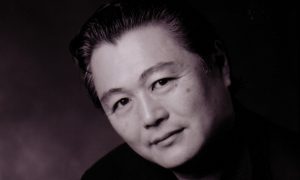 David Mura is the author of Turning Japanese: Memoirs of a Sansei (1991 and 2005), a New York Times Notable Book of the Year, and winner of an Oakland PEN Josephine Miles Book Award. His poetry books have also garnered awards: After We Lost Our Way (1989) is a National Poetry Contest winner, and The Colors of Desire (1995) won the Carl Sandburg Literary Award.

When asked if he would like to share something in particular with Limestone Post, Mura confessed that he had been hospitalized twice for COVID. “I was attached to my oxygen tank like some anchor I couldn’t get rid of,” he said. Subsequent months of recovery were challenging, but enabled him to confront his own mortality, as Asian American playwright David Henry Hwang continues to do, after the assault he had experienced in 2015. 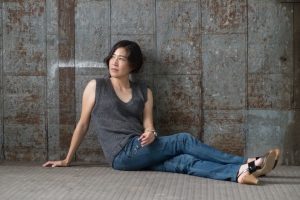 Kyoko Kitamura is an avant-garde jazz vocal improviser and composer based in New York City. She is also known for her decade-long partnership with musician and composer Anthony Braxton and has been featured on many of his releases. Her formal musical training included the study of piano at Juilliard Pre-College and private lessons for counterpoint and Schoenberg harmony.

When asked if there was anything she would like to share with LP, she admitted that the pandemic had led to sweeping overnight changes for Tri-Centric Foundation, the nonprofit organization that supports Anthony Braxton’s ongoing work and legacy. “We had an entire year of scheduling cancelled in a blink of an eye,” she said. The Foundation has effectively struggled to remain active, but Kitamura has made the difficult decision of resigning as its current executive director to focus on her own work as a freelance musician. 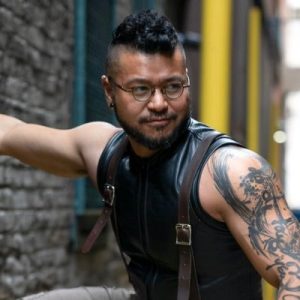 Danny Thanh Nguyen is a writer and kink columnist based in San Francisco. A multiple pronoun user, they have been published in The Offing, The Journal, Gulf Coast, and Foglifter and awarded grants and fellowships from Kundiman, Ragdale Foundation, Lambda Literary, and San Francisco Arts Commission. Together with Lisa Kwong, Nguyen hosted “Speaking from the Middle: An Evening with Asian American Writers” in 2018, a reading that celebrated the twentieth-year inception of the Asian Culture Center at Indiana University–Bloomington.

Like David Mura, Nguyen is a COVID survivor. While tackling challenges that the pandemic has further complicated, Nguyen stated in a public Facebook post, “I wanted to go for a walk, but I don’t want to risk getting killed. I try drafting pithy things about the [Atlanta] shooting, but keep deleting. I’m just tired.” Nguyen’s post reflects the sad reality that the pandemic has been additionally challenging for Asian Americans, and validates nationwide actions toward #StopAsianHate solidarity. 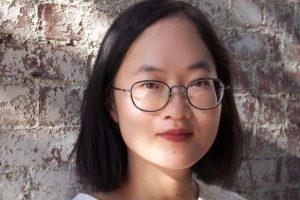 Anni Liu is a poet, writer, editor, and translator based in Minneapolis. She was awarded a Master of Fine Arts (MFA) degree from Indiana University–Bloomington where she served as poetry editor for Indiana Review. Her work has been featured in publications that include Ploughshares, Hyphen, The Georgia Review, and Quarterly West, and she has won an Undocupoets Fellowship and a literature award from the National Society for Arts and Letters, among other honors. Winner of the Lexi Radinsky Prize, her first poetry book, Border Vista, will be released by Persea Books in 2022.

Together with Yusaku Yajima, Liu started up the Bloomington Japanese/Japanese American Community, a Japanese-culture interest group whose activities included viewings of Japanese films, such as After the Storm (directed by Hirokazu Koreeda, 2016) at the Herman B Wells Library, and Shoplifters (directed by Koreeda, 2018) at Indiana University Cinema, followed by dinner at Gourmet Garden or Chow Bar. The group’s activities have been on hiatus since the start of the pandemic.

Unapologetically committed to consciousness-raising about “the alienation and psychic cost of migration, of internalized racism and Whiteness,” Liu has remained resilient and hopeful throughout the pandemic. Although pandemic-induced isolation has made her “hungrier for the world and for genuine connection,” it has also intensified her memories, and enabled her to “imagine more deeply, more wildly.”

The pandemic has led to the cancellation of numerous cultural events that include Taste of Asia, the most popular AAPI Heritage Month program in Bloomington. Taste of Asia is traditionally held at the IUB Auditorium and draws hundreds of participants each April.

So, instead of Taste of Asia, check out other AAPI Heritage Month celebration options, such as the virtual edition of the Writers Guild at Bloomington First Wednesdays Spoken Word reading on 5 May 2021 starting at 6:00 p.m. EST. Two ways to enjoy: Email the Writers Guild for a Zoom link, or login to Facebook for livestream from the Writers Guild page.

Hiromi Yoshida is a freelance writer and editor, who serves as a diversity consultant for the Writers Guild at Bloomington and for Cardinal Stage. She also serves on the editorial board for Flying Island, Plath Profiles, and Gidra, and teaches poetry for the Indiana Writers Center. Her poems have been added to the INverse Poetry Archive, and nominated for the Pushcart Prize and Best of the Net. She is the author of Joyce & Jung and the poetry chapbooks Icarus Burning, Epicanthus, and Icarus Redux.
Tagged
Comments