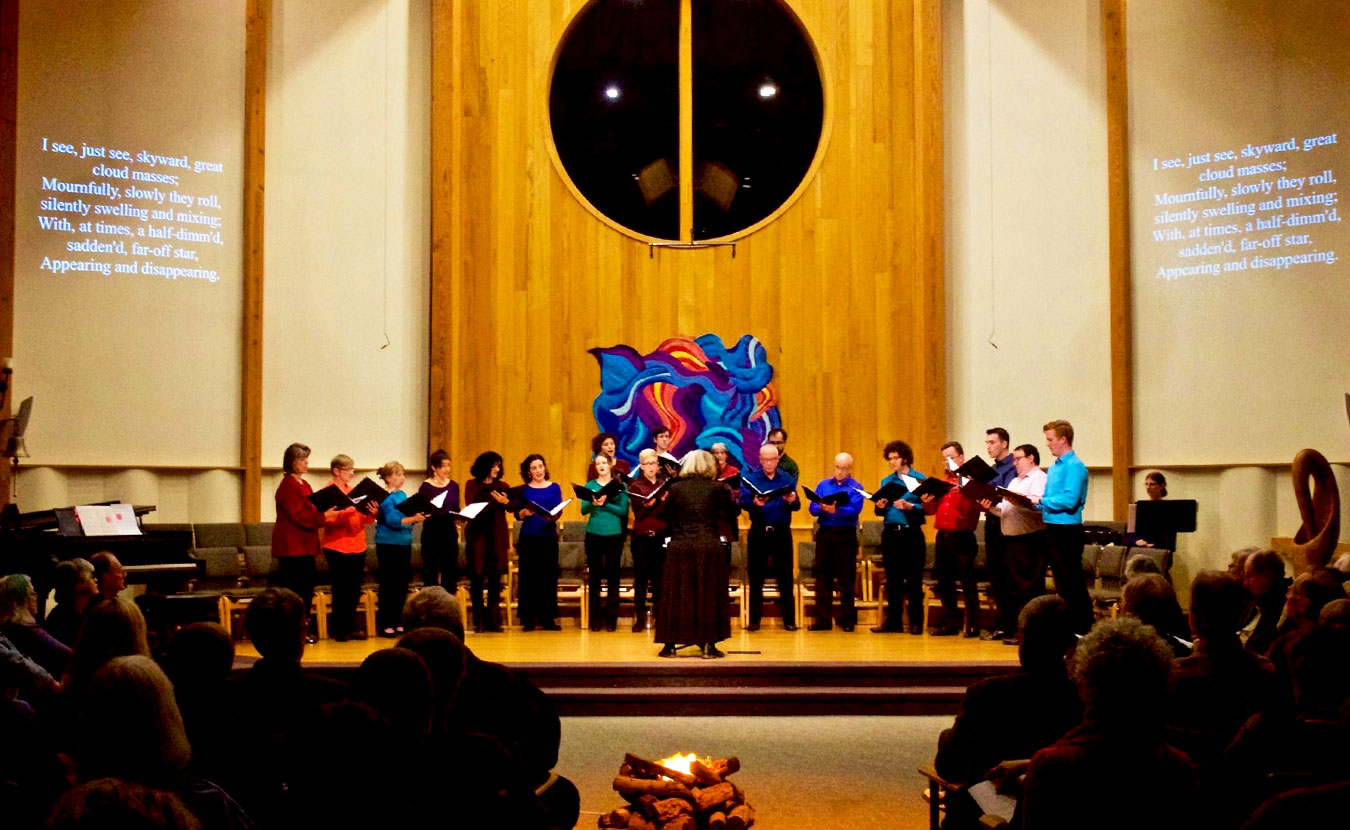 Voces Novae, pictured here giving a concert in February at Unitarian Universalist Church, is celebrating their 20th anniversary with a concert called “The Art and Science of Happiness” on Saturday, May 13. | Photo by Merrill Hatlen

When my editors assigned me a story on choral music, little did I know that Voces Novae’s vision of choral music would have me soaring with Leonardo on his flying machine, communicating in a world of robots, finding peace on a flower-covered hillside, or clapping along to Pharrell Williams’ “Happy.” As they rehearsed for their upcoming 20th-anniversary gala, called “The Art and Science of Happiness,” I began to realize that, more than just providing me an evening full of lovely music, Voces Novae was leading me on an adventure through their interpretation of the art and science of happiness.

Voces Novae is a highly innovative chamber choir that has been taking Bloomington audiences on music-filled adventures for 20 years. At times, those adventures are very literal, like when they led a walking tour down the B-Line Trail three years ago — audiences gathered as they sang songs celebrating Bloomington and Indiana history. Sometimes their adventures are more conceptual. For example, Voces Novae have taken their audiences on a tour up and down the gender spectrum, singing songs about the permeability of gender identity while each singer purposefully dressed to create varying gender representations.

Voces Novae’s current adventure has a diverse set list with selections dating from the medieval to the present day. It highlights composers from all over the western world, including France, Italy, and even Bloomington. Some pieces are intellectual and experimental while others are more mainstream and poppy. The group’s predilection for unique events, unconventional themes, and unorthodox musical combinations makes Voces Novae a one-of-a-kind musical experience for audiences and musicians alike. According to three-year choir member Abby Perfetti, this is the “most unique choir I’ve sung with because we really try to be forward thinking in what we do…. We are not afraid of branching out from being a ‘proper choir’ or a ‘fancy choir.’”

Perfetti, a soprano, knows all too well the common perception of choral music. She has participated in several choral groups that perform in a more traditional manner: stoic faces behind black music folders singing lengthy classical pieces. While Perfetti loves this kind of music and believes “it’s tons of fun for singers,” it’s not always ideal for audiences. Voces Novae defies convention by creating a more interactive, expressive performance that, Perfetti feels, allows both the musician and the audience to emotionally connect with the music.

Voces Novae’s cultivation of emotional connection is what transforms their performances from mere concerts into musical adventures.

Voces Novae is celebrating their 20-year legacy this Saturday, May 13, 5 p.m. at Unitarian Universalist Church (2120 N. Fee Ln.), with a short concert followed by a Happiness Fair with interactive games and activities. You can find out more information on Voces Novae and “The Art and Science of Happiness” concert on their website.