’Tis the Season — for Sports. Keeping Tabs on the Hoosiers 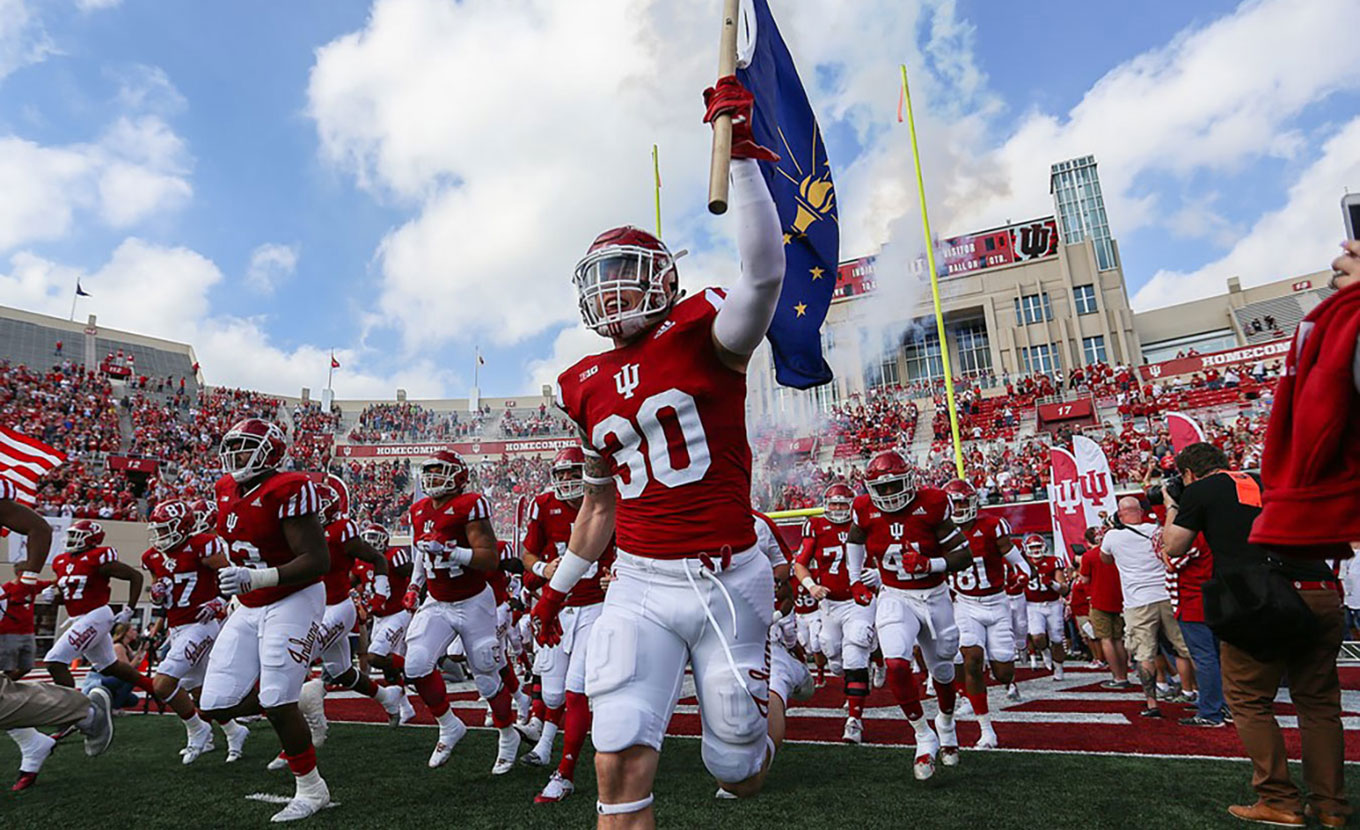 Indiana University football team is vying for another bowl appearance and the basketball season is getting started. This means sportswriters are busy in Hoosier Nation! And thanks to blogs, podcasts, and social media, plenty of info about the Hoosiers is at your fingertips. | Photo by Evan De Stefano, IU Athletics

There is nothing quite like Bloomington in the fall. The trees change colors, temperatures drop to perfect levels, and the best part — Indiana University football season is in full swing and it’s the start of basketball season.

The football team, with a 5-4 record heading into the home game against 12th-ranked Penn State this weekend, is vying for another postseason bowl appearance. Meanwhile, returning men’s hoops stars such as Thomas Bryant, OG Anunoby, and James Blackmon — as well as an impressive incoming class of freshman — have people buzzing about this year’s Hoosier squad. IU, ranked 11th in The Associated Press poll and 12th in the USA Today Coaches Poll, start the regular season on Friday, November 11, against 3rd-ranked Kansas. Whether local or national, the media’s eyes are on Hoosier Nation. | Limestone Post

Which means local and national media is all over Hoosier Nation this month. And thanks to bloggers, websites, podcasts, and other outlets, keeping up with the Hoosiers is easier than ever. But how do you keep all of those sources straight? Here’s a short list. (And if football and basketball aren’t your thing, some of these sites cover “other” sports, too!)

Co-founders Alex Bozich and Ryan Corazza have done an outstanding job of covering the Hoosiers, considering the size of their staff. With only a handful of writers, they post daily articles such as IU basketball-player profiles, game coverage, and news about potential recruits.

Inside the Hall covers Indiana recruiting better than anyone. They have a section that provides bios for most of the high school players being recruited for the program and another that filters all of the articles where these players are mentioned.

Another feature is the site’s message board. The discussion threads by its community of readers, some with hundreds of posts, allow you to connect with die-hard Indiana fans and get a grasp of how supporters feel about the current state of the program.

You may know Dan Dakich from his time as a former Indiana basketball player and coach — or as that uninhibited loudmouth that commentates games for ESPN. Whether you love or hate Dakich is one thing, but he does provide great basketball insight. His radio show does not solely cover Indiana basketball, but it will be a recurring topic once the season is underway.

The Dan Dakich Show should be your go-to if you’re looking to be entertained. As with most radio shows, he brings in a number of interesting guests to keep things fresh. Laughs, eye-rolls, and solid arguments are abundant on this wild ride. If you know Dakich, you know what you’re getting into. His radio show is on Indy stations FM 93.5 and AM 1070 from noon to 3 p.m. weekdays, which can also be streamed directly from the site or from the “1070 the fan” mobile app.

Yahoo! Rivals site TheHoosier.com is perhaps the best site to get your overall Indiana University sports news. While their focus is on football, basketball, and baseball, they have an “other” section packed with stories on less-covered men’s and women’s sports. Staff writer Jordan Wells reveals how they’re able to get access to IU news. “All three of our main writers live in Bloomington, so all of us are on the ground at as many IU events as possible — be that a press conference, a practice, or a game — and covering them from every angle. Sometimes it’s a grind, but this is a job of passion, and we all love what we do.”

Wells and his team, Sam Beishuizen and Stu Jackson, do an excellent job of capturing Hoosier spirit. They often publish stories you can’t find anywhere else, like their preseason countdown of IU basketball’s first games or exclusive interviews with players, coaches, and analysts. Some content on The Hoosier is free, but a subscription gives you access to member-only message boards, highlights, recruiting interviews, coverage of Rivals Camp Series, and much more.

As Wells puts it, “The community of message-board posters itself — we have the largest in the entire Indiana market — is worth the money, from both an informative and entertainment standpoint. For example, IU basketball has a commitment in the class of 2017 who’s from Philadelphia, and one of our readers who happens to live there is going to go to his games this winter and post video updates on the forum. How awesome is that?”

SB Nation’s Hoosier blog, The Crimson Quarry, is the place to find opinion pieces. While they produce a large amount of posts per month, they lack a certain professional touch that the other sources have. What The Crimson Quarry does provide, however, is a community where users can create their own posts, as well as links to shops, ticket purchasing sites, and gambling odds. Their bloggers have intriguing writing personalities, making it a great place to get different perspectives on bigger stories. Returning stars such as Thomas Bryant, OG Anunoby, and James Blackmon — as well as an impressive incoming class of freshman — have people buzzing about this year’s Hoosier squad. | Photo by Mike Dickbernd, IU Athletics

What better way to get sports news than from your hometown newspaper? Here in Bloomington, The Herald-Times’ contributors Mike Miller, Jeremy Price, and Seth Tackett post to the site HoosierSportsReport.com almost daily and provide an in-depth look at most IU (and high school) sports — not just the big ones. A new video channel has added a level of coverage that other sites lack.

“We’re really focused on bringing coverage from every place the Hoosiers go,” says Miller. “We offer all IU breaking news stories for free on the Hoosier Sports Report blog, and I believe Chris Howell’s comprehensive postgame photo galleries are must-see features of the site.”

Hoosier Sports Report has access to games and events that other blog sites don’t have the resources for. They also have the freedom to write feature pieces, which are Miller’s favorites. “When possible, pulling back the curtain on the personalities and back stories is the most satisfying part of the job,” he says.

Although IndyStar.com has a paywall, it may be worth the small amount of cash to see what IU insider Zach Osterman has to say. Osterman covered the Hoosiers as a student, first at IU, then at IUPUI while studying for his master’s degree. As a professional, he worked for Inside the Hall for just over a year, then for 247 Sports, and now, two-and-a-half years later, he is the IU insider for the largest-circulation newspaper in the state.

His knowledge of the program and unique writing style make for a fun and interesting read. Some of his best pieces are one-on-one interviews with players that few other sportswriters can get.

Terry Hutchens needs no introduction. The beat writer for CNHI Sports Indiana has been covering the Hoosiers for 20 years, is syndicated in more than a dozen newspapers, and has written several sports books. His story is too large to cover here, but you can follow him on Twitter @IndySportsHutch or read the story Limestone Post published in January about “the hardest working sportswriter in Indiana.”

Speaking of tweeters, for memes, fun facts, and links to intriguing stories, follow @ChronicHoosier. With more than 27,000 followers, Chronic Hoosier is becoming a must-follow for people who like tweets like this: “Who knew that #iubb invented glass backboards?”

Benjamin Beane graduated from Indiana University in 2015 with a bachelor’s degree in journalism. While he hopes someday to write a horror screenplay, he is happy writing freelance articles. He’s excited for the road ahead and always searching for new experiences and opportunities. Benjamin spends most of his free time playing recreational sports, watching movies, or enjoying a nice hike.
Dason Anderson

No Replies to "’Tis the Season — for Sports. Keeping Tabs on the Hoosiers"