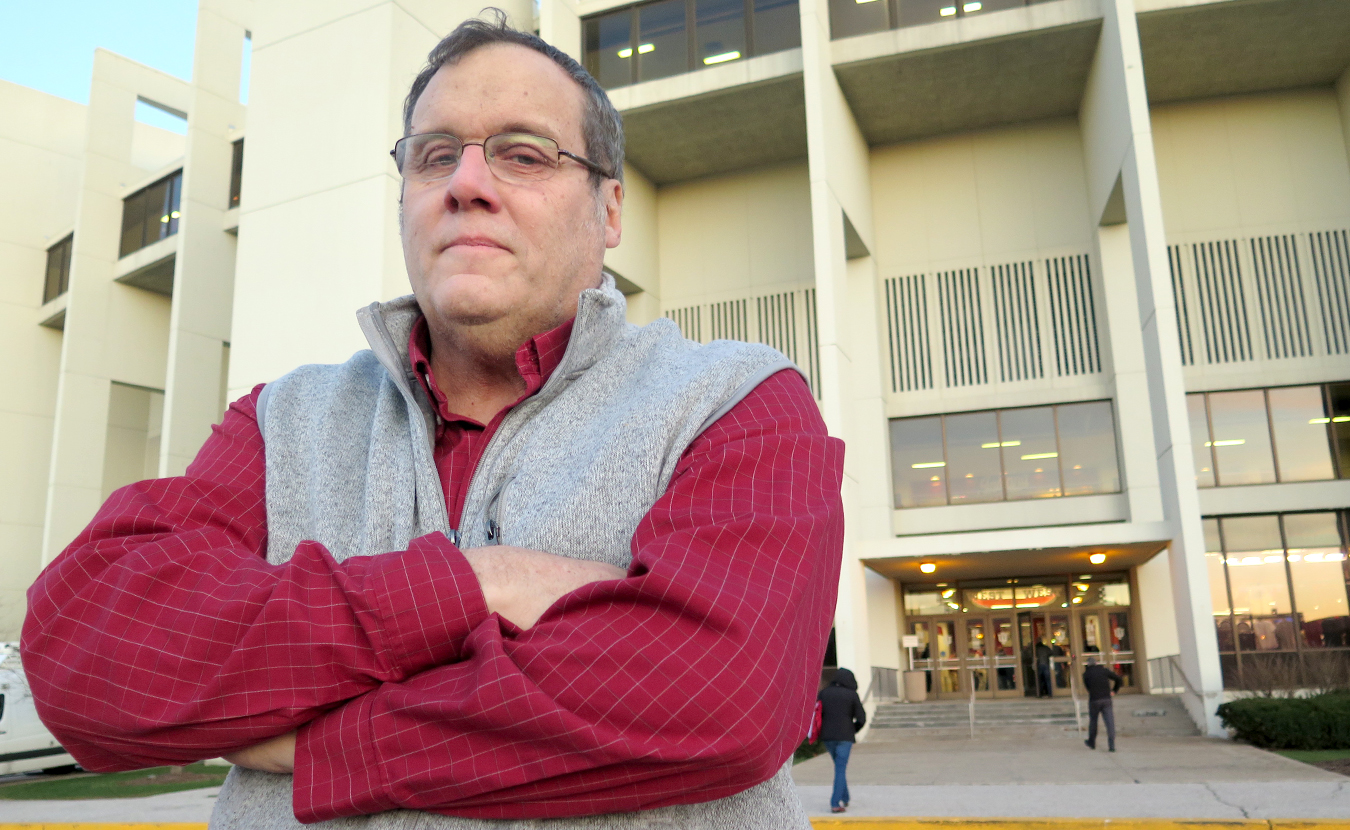 Terry Hutchens stands at the west entrance of Assembly Hall before an Indiana University men's basketball game. After more than two decades as a sportswriter for "The Indianapolis Star," Hutchens transitioned into digital media, covering IU sports on online sites such as Scout.com and BtownBanners.com. | Photo by Lynae Sowinski

[Publisher’s note: Terry Hutchens died on December 21, 2018, after being critically injured in a car accident in Fishers, Indiana. Known as “Hutch” to his friends and colleagues, he was considered one of the preeminent sportswriters in Indiana and the region.

The prolific, award-winning journalist was also the author of 11 books, a college teacher, a mentor, and “a devoted father, husband and a treasured friend to so many,” said IU Vice President and Director of Athletics Fred Glass in an article on IUHoosiers.com.

In the article, IU football coach Tom Allen mentioned Hutch’s “class and professionalism,” and IU basketball coach Archie Miller called him “truly one of the best.”

On a cold day in January 2016, Hutchens graciously agreed to let us to photograph him for this story. Limestone Post was only a few months old at the time, hardly a household name, but Hutchens let us take as much time as we needed outside of Assembly Hall before a game, when he could have been inside, warm, selling his latest book. Truly a class act.]

Terry Hutchens always wanted to be a sportswriter. Not an astronaut, not a doctor, not a fireman. A sportswriter.

Beginning in middle school in Southern California — where he grew up and lived until he was 28, idolizing UCLA basketball legends like John Wooden and Bill Walton — Hutchens followed a fairly traditional path toward that career objective, winding up at The Indianapolis News in 1991, prior to its merger with The Indianapolis Star. He started out covering the Indianapolis Colts and in 1998 moved to the Indiana University athletics beat.

Hutchens, 57, describes his university education, however, as “the 13-year plan.” After graduating from high school in Yorba Linda, California, he received a scholarship and began studying journalism at California State University–Fullerton. Simultaneously, he worked nearly full time covering high school sports for the Fullerton Daily News Tribune. His grades began to suffer. “I didn’t realize that I needed to drop my classes if I stopped attending them,” Hutchens recalls. “I ended up failing miserably. … I got kicked out of school.”

After several years of working in the newspaper industry and moving to Indiana, Hutchens finally completed his bachelor’s degree in 1989 at IUPUI. But no amount of schooling could prepare him for what happened in 2013. A newsroom shakeup saw several sports-department stalwarts offered controversial reassignments, which affected beats on the Pacers, Colts, and Butler University. And Hutchens lost his IU assignment. “It was a tough day for all of us,” Hutchens says. “I didn’t ‘own my beat,’ is what they said. I own my beat as well as anyone.”

According to a memo issued to newspaper staffers by Star Editor Jeff Taylor, which was obtained by the Indianapolis Business Journal, they instead wanted Hutchens to oversee “new efforts on recruiting, focusing primarily on college basketball.” Hutchens was not happy with the decision made by the Star’s new leadership. “It was basically going to be high schools all over again,” he says of his new assignment. “It was clearly a situation of a guy who came in and wanted his own people. I mean, it was a business decision.”

In a Facebook post, Hutchens called the Star’s move “a blow to a lot of good people who have done some great work as the top guys on their respective beats.”

A week later, with the blessing of his wife, Susan, Hutchens made a business decision of his own, parting ways with the Star and taking a job with Scout.com that would allow him to continue to cover IU sports. During his two-year tenure with Scout, he helped resurrect All Hoosiers, the company’s IU athletics site. For IU basketball game coverage, he even got back his old seat at Assembly Hall — the same one he occupied while with the Star. And he never looked back.

“I was 55, thinking that I was going to be in the newspaper business until I was done,” he says, “and all of a sudden, this whole thing … the winds of change … I ended up going in a different direction.”

Hutchens enjoyed his transition to new media so much that when his contract with Scout ended in July 2015, he took another chance in the online world, getting involved with BtownBanners.com at the behest of Publisher Jason Edie, who was looking to add more content to the site. Although BtownBanners had thousands of registered users, it was primarily a message-board–style site, chock-full of forums for IU fans to express themselves. (And, boy, do they ever: At publishing time, the “Fire Tom Crean” thread had nearly 2,900 posts.)

In addition to the forums and coverage on other Hoosier sports, IU football and men’s basketball lovers can find features, game stories, pre- and post-game analyses, player and coach profiles, recruiting updates, and more — many of them carrying the byline “IndyHutch.” Hutchens recruited more writers to round out the site’s editorial team, and, all told, about ten new articles go up each week. For Hutchens, though, the best part about his new gig is the ongoing conversations and discussions with fans — something he had at the Star but, ironically, didn’t experience very much at Scout because of the way the site was set up. With BtownBanners, he says, “whenever you write something, there are lots of comments on it, and (it’s) a good chance to interact with people.” As an example, Hutchens mentions how he wrote an analysis piece following IU men’s basketball team’s loss to Duke in early December and within a few hours had at least 60 comments to respond to. “I like having the back and forth, still, with IU fans,” Hutchens says. “The thing with IU fans is that they’re really passionate about their teams, and I think it’s that passion that has kept me interested in wanting to be a part of that beat moving forward.”

Hutchens is also enjoying the freedom and autonomy that comes with his role at BtownBanners. He’s at liberty to pursue outside freelance work (and his sports coverage is often picked up by the Associated Press and Reuters), as well as write books — his latest, about IU basketball, is called Missing Banners and was published in late 2015 with fellow author Tom Brew. Hutchens also keeps stats at IU football games, teaches journalism classes at IU, plays in poker leagues, and is active in the choir at Holy Spirit Parish at Geist Catholic Church in Fishers. He likes writing music and even wrote and sang a song for his wife on their wedding day. He also makes appearances at IU Alumni Association events around the country.

Basically, after years of being, as he puts it, “the good soldier,” Hutchens finds himself in the enviable position of being his own boss. And he still gets his media credentials and good seats for IU basketball games.

“The biggest difference is, when I was at The Star I always had somebody above me telling me pretty much every story that they wanted me to do. And if there were stories that I really wasn’t comfortable writing, it didn’t matter, I had to write them,” he says.

Now, he concludes, “I decide what I want to write, and I like that.”