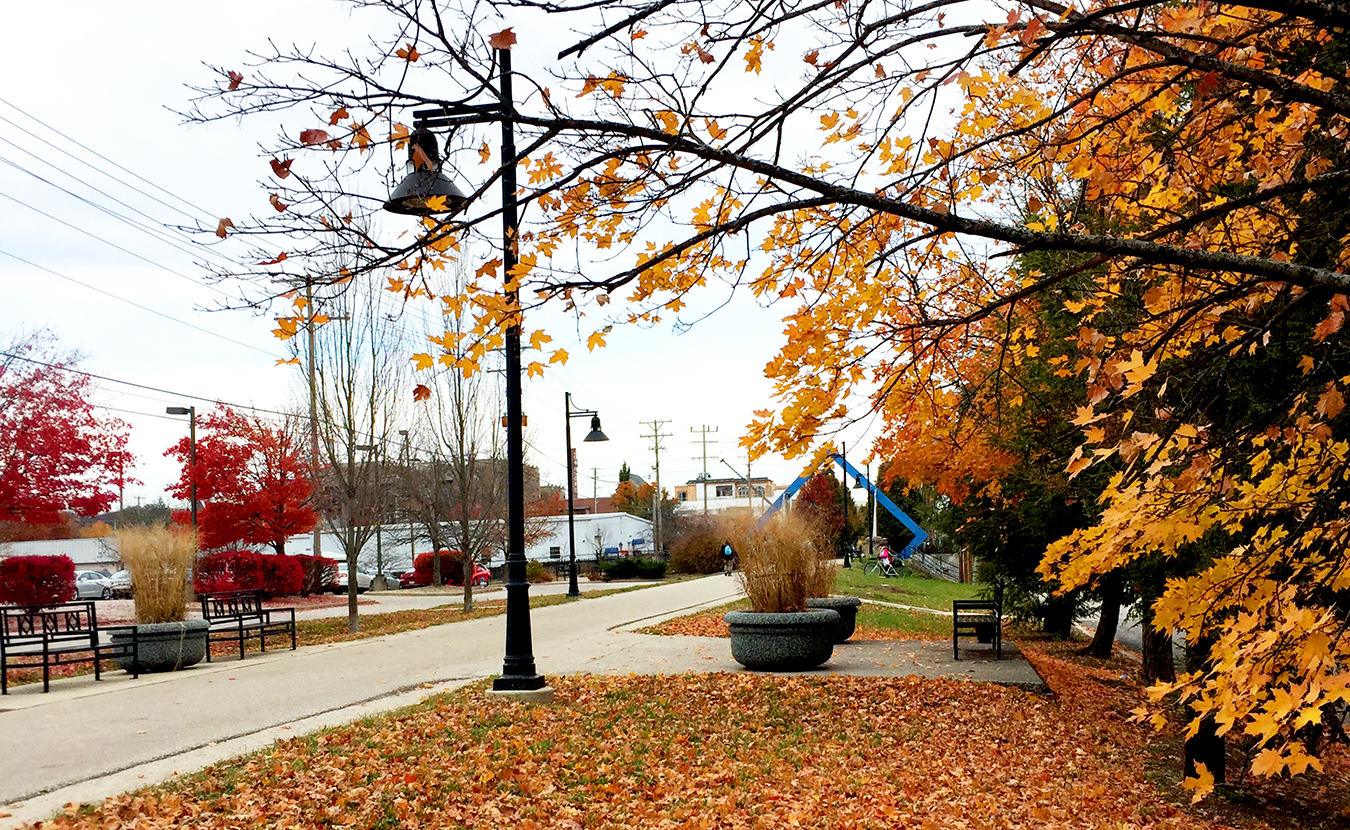 A sea of golden leaves, an old railroad bridge, the chatter of downtown, front porches … these possess “the reality of what Bloomington is,” writes C. D. Culper. In this second of our two feature stories on having a sense of belonging, Culper says everything Bloomington holds dear is held in “the B-Line’s pulse and patterns.” | Limestone Post

[Editor’s note: This story by C . D. Culper is our second of two essays that describe why Bloomington feels like home. As so many people travel during the holidays, whether to or from their ideals of “home,” we want to share these stories that beautifully convey “a sense of belonging.” You can read the first essay, by Amelia Brown, here. Happy holidays!]

Trains used to rumble through the center of town. Click by clack, the sounds of the rattling boxcars and tankers echoed off the walls of the bustling warehouses and switchyard buildings. The tracks led engines to a world beyond the hills and horizon, and in the silence of the fading trains, the beams of wood and steel were pulled away behind them like worn stitches across a colorful scar. Now, the sounds of Bloomington joy spread over the asphalt from one end of the beautiful B-Line Trail to the other. 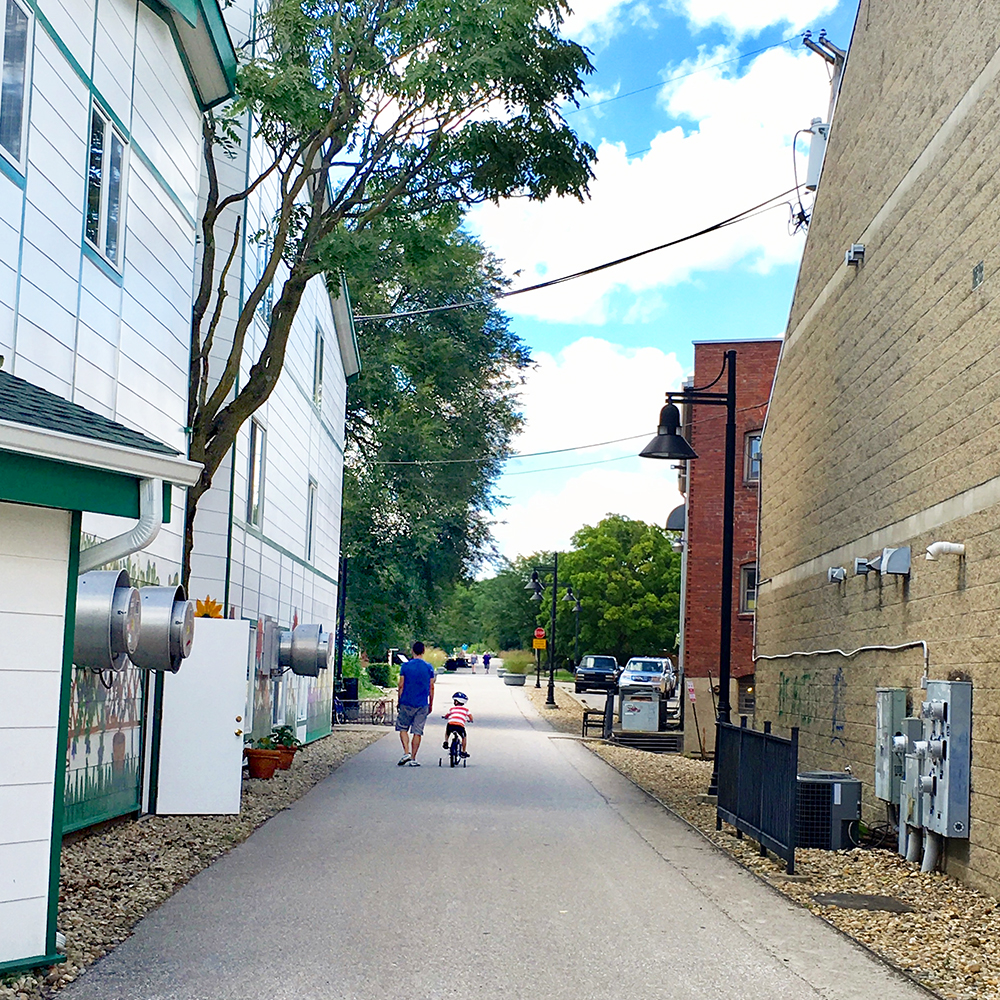 Culper asks, “Is this just a trail at the end of a dream?” | Limestone Post

An eclectic 3.1 miles of pavement stretch from Adams Street to Country Club Drive, possessing the reality of what Bloomington is, cradling all the things the community holds dear to its identity, as well as some of the bumps we learn to endure. Cafés, distilleries, and bike shops hug the lane of passing travelers in hopes of presenting a tempting enough diversion to draw them in, but nothing catches the eye of the Bloomington spirit in the fall like the seas of golden leaves, coasting to the ground in a rush of downward flight.

The way the soft sun breaks over the old railroad bridge above the wooded hills, to the chatter of the city in the downtown blocks, to the porches among a row of dwellings modeled after coastal vacation homes … all hold the B-Line’s pulse and patterns, the little parts of the trail that keep it in motion. The singing woman walks softly, her prayer beads hanging from the palm of her hand, as the gleeful occupants learn to share in the beauty of the B-Line, where the courage of one person’s journey inspires another.

The trail is a hangout for many, a place for dog lovers to use their pets as conversation starters, a carless road for six-year-olds to test their training wheels as weary parents play catch-up while sipping hot coffee from paper cups. There is litter on some of the edges, accompanied by the people who put it there. Bench-folk philosophers depart wisdom between the strokes of their cloudy beards, as people experiencing homelessness greet one another through a shared hardship.

Bats who have built their trust in cracked limestone slink into the downtown twilight, darting between lines of sweat-soaked cyclists. Yet, the atypical Bloomington bike enthusiast cruises on a poor diet, never delighting in the purchase of spandex. To them, riding a bike is a good way to get out of the house and have a cigarette, as long as one can pedal without the fear of ash to the eye. There are those on bikes who text and ride, presenting waves (and the occasional middle finger) to cars signaling a stop from roads that continue to travel where crossing lights once blinked. It’s not odd to find a muscular man coasting by on a bike designed for a woman; for if Bloomington has taught us well, it’s that we don’t have to assign a preconceived societal idea of gender to anything.

In one stretch you can overhear a couple as they slowly fall in love, in another a college girl deals with a breakup on her cell phone. South of the bridge on Grimes may as well be a wilderness, as deer teach their young to sneak among the shedding trees between the darts of city life. Cautious squirrels dotted along the sides of the strip hope that the hawks in the high branches see only stones below, as blue jays perched upon lines of yellow construction tape chirp prayers in hopes their homes will be spared from the chainsaws.

But can all this really be seen, or is this just a trail at the end of a dream?

The connected culture of the Bloomington summer starts to change with the fall season, as undergrads weave their way through shorter days upon electric scooters that clump and spread from street corner to street corner like bacteria. Yet, many of us were once tuition-paying patrons, and it was the university that led most of us here. But seasonal sights, like the trail beneath the crisp golden leaves, is where we gather, and why we stay.

And as every profit-driven rectangular condo takes the place of a grove of trees or a quaint little yard that once was, the townsfolk who endure know that the bite of every winter is washed away upon the new dawn of an undiluted spring. We share in this lane, this odd, lovable artery drawn from a heart in bloom, and we the keepers serve our city by warming the line with the tapping of our feet, the roll of our wheels, and the smiles shared between those we once knew as students and strangers.

C. D. Culper was born in southern Indiana and loves to spend his time writing bios in third person. After receiving his degree in education from Indiana University in 2008, he joined Americorps. Since then he has been an advocate for nonprofits and community education in Colorado, Tennessee, and now in his home state. He is passionate about making a lasting connection with readers, and he believes every person has an opportunity to grow and thrive as they discover their passions through the never-ending, formative years of our lives.
Tagged
Comments