Saving Hoosier Agricultural Heritage, One Barn at a Time 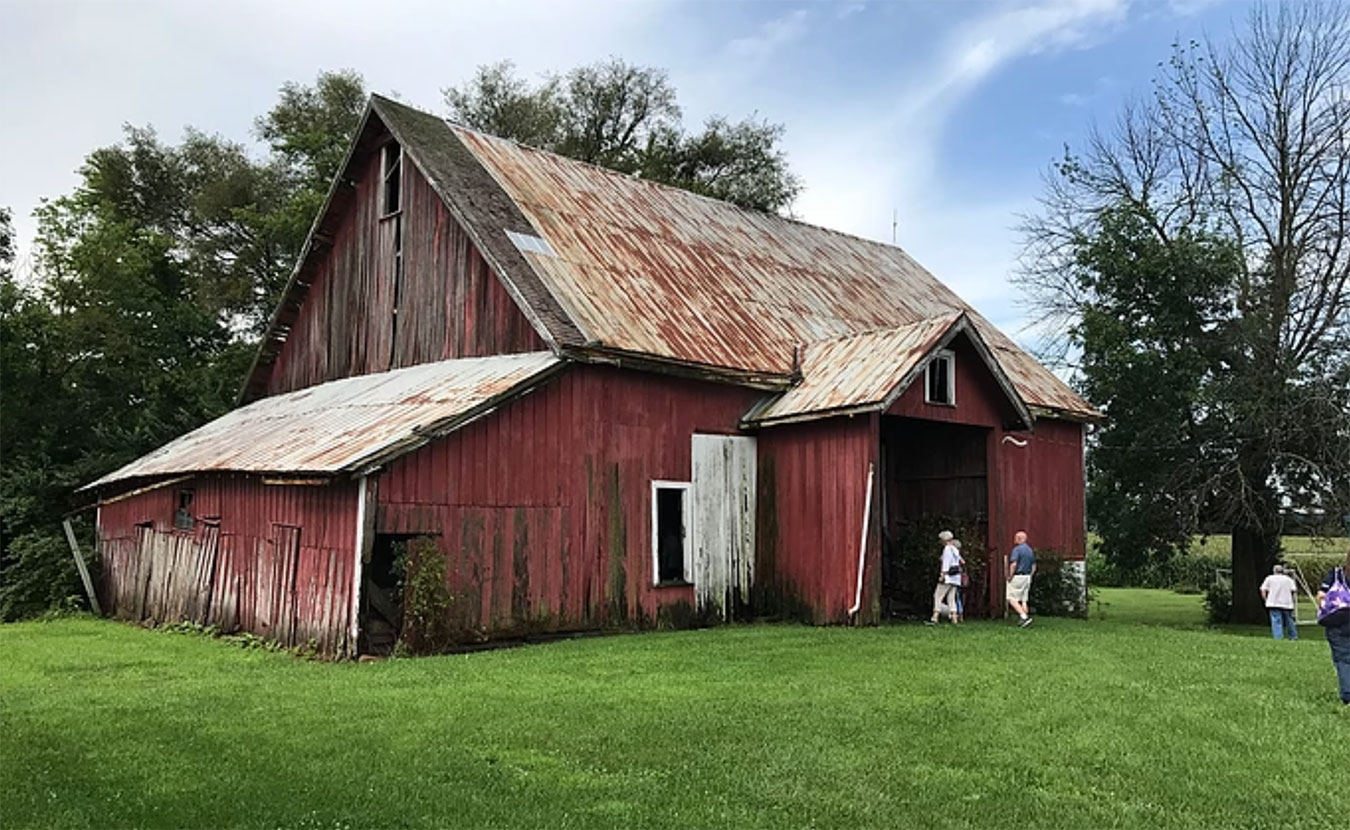 Every time you tear down a barn you obliterate a memory, says barn preservationist Duncan Campbell. But he and others are committed to saving what’s left of these legacies of Indiana’s diverse barn heritage. | Photo courtesy of the Indiana Barn Foundation

“The barn tells a particular migration story,” says Duncan Campbell, member of Bloomington’s Historic Preservation Commission. Campbell, the recently retired director of the Graduate Program in Historic Preservation at Ball State University’s College of Architecture and Planning, also serves as a board member of the Indiana Barn Foundation and, along with Marsha Williamson-Mohr, co-wrote the award-winning book Indiana Barns.

“When the colonizers came through this country,” he tells me during a phone interview, “they brought all their cultural traditions with them. They didn’t bring just a blank slate.” Indiana has a rich agricultural heritage that reaches back even further than its 200 years of statehood. Maybe we Hoosiers are pigeonholed into being corn farmers, but in truth we and our ancestors cultivate a much more diverse agricultural history. (Did you know that Indiana is the second leading grower of tomatoes for processing, second only to California?) And this legacy is reflected in Indiana’s barns. Or at least what’s left of them.

“You could pretty much bet that every homestead had a barn,” Campbell says. “That had to be tens of thousands [of barns] compared to thousands today.”

Campbell is a driving force behind the preservation of Indiana’s barns. He, along with other historic preservationists, including Gwen Gutwein and Carolyn Rahe, lead the Indiana Barn Foundation (IBF) in its quest to restore and preserve these remaining treasures of Indiana’s cultural past.

“Every time you tear down a barn you obliterate that memory,” Campbell says. And I can hear in the tone of his voice that he feels the pain of that loss. This Indiana barn is showing its years. | Courtesy of the Indiana Barn Foundation

Campbell laments to me over the phone: “It was after WWII that we really started scraping this stuff off the ground, because we did so much building: large housing developments. Every suburb that you drive by had at least one barn on it.” Once something like an old red barn is lost, it’s hard to regain. “It’s true that carpenters today don’t know as much about wood as their ancestors did,” Campbell points out.

And he was a professional carpenter for a quarter of a century, so he should know. “[I was] living out on a farm, doing odd-job carpentry,” he says. “I had a lot of neighbors who had old barns, and I’d pick up a dollar here and there repairing the chicken shed. I was working with my neighbors, and most of what they wanted were barn repairs. A lot of them had gone back to the land themselves, but they weren’t skilled in this way.”

Campbell’s early experiences opened his eyes to the importance of keeping this heritage alive. “Most of the cultural value of these places — people’s homes — were going in the dumpster. I worked with some people from the City of Bloomington to change the perspective. To preserve and repair, not tear down and rebuild.” IBF was founded in 2013 as a 501(c)3 nonprofit organization that provides grants to owners of barns in need of repair. As Campbell says, it is the foundation’s job to “get the word out” about barns. It hosts two annual “Barnstorm” tours — one in the spring, one in the summer or fall — as well as seminars and other events to promote awareness of Indiana’s fast-fading bucolic heritage. IBF will host the fall Monroe County Barn Tour on Saturday, October 28. Participants on the tour will see how some barns have been repurposed while others have simply been restored for continued use. Campbell notes, “[There’s] a really nice, small bank barn that’s on this tour — you couldn’t fit more than 20 people inside. But it’s not a Pennsylvania Dutch bank barn.” It’s that adaptive design, that clever architecture of our forebears, that gives us the greatest insight into the ways of the past.

Gwen Gutwein’s passion for barns runs about as deep as our collective agricultural heritage. “I’ve been in over 200 barns in the last 12 years,” she says. “I’ve never seen two barns the same. Each barn is unique.”

Gutwein is founding vice president of IBF. “We are loosely affiliated with Indiana Landmarks, the National Barn Alliance, Friends of Ohio Barns, and Michigan Barn Preservation Network,” she says. “Our goal is to rescue barns, educate the public about the demise facing our heritage, and provide barn owners with a variety of valuable information.” Aside from Gutwein’s service with IBF, she is also an accomplished painter. In 2004, Gutwein set out to “document — on canvas, in oil paint — historic barns from throughout my home state of Indiana.” It was her goal to paint two barns from each of Indiana’s 92 counties.

“As an artist, I wanted to capture the spirit of these historic gems on canvas and show the world the beauty in the barn, before they are gone forever,” she says. “The barns reflect the character, diversity, ingenuity, and integrity of our ancestors, and those fleeting characteristics are captured on the canvas.”

Gutwein managed to find two paintable barns in all but four counties — which were mostly in the southern part of the state — and she made up the difference in northern Indiana counties. I was surprised to learn that there are more remaining barns in the northern half of the state. Gutwein’s response was pleasantly simple: “What I discovered in my years of work is that the quality and quantity of barns express the quality and quantity of farmland. Several areas in southern Indiana are quite rugged and rocky, limiting the farmland to narrow strips along waterways.” Shows what I know, but I was grateful for the lesson. On her oil-and-canvas conquest, Gutwein gained the trust of each barn owner, and so gained intimacy with each of their barns. “I also measured and documented each barn and wrote a barn story to accompany each painting.” Gutwein is a wellspring of information and inspirational anecdotes, I assure you. Explore her website and you’ll find sentimental pastorals of incredible depth, as well as tales that speak of Indiana’s agricultural wisdom.

When you ask people who grew up around barns — who really know barns — about barns, you get a lot of very sentimental, very reflective information. I spoke to Carolyn Rahe, founding president of IBF, about her history with barns and why she decided to found the organization.

“My dad was a veterinarian in a rural community and traveled to farms in our area in his work,” she tells me. “For as long as I can remember, he carried a camera and took photos of interesting barns along his route. This was just part of life with my dad. His barn slides would show up between photos from vacations and holidays during family slide shows. He created a presentation that he called ‘Save the Family Farm,’ which included slides of local barns that he would take around to Kiwanis Clubs, Lions Clubs, and the like.”

In late 2013, Rahe read an article in the Indianapolis Star detailing Gutwein’s pastoral efforts, as well as facts on Indiana’s current state of the barn. The article described, among other topics, how Indiana was trailing other states in barn preservation efforts, despite there being “more barns per square mile than in all but five other states.” A barn in the Monroe County countryside. | Limestone Post

“In that article, the estimated number of barns in Indiana was said to be less than 20,000, which was down from 30,000 in 2002,” Rahe says. She also recalls a line that said Gutwein had better keep busy because the old barns of Indiana are disappearing quickly. Inspired by Gutwein’s paintings and the memory of her father’s slide shows, Rahe set out to make a difference.

“I realized that a big reason barns are disappearing is the cost of upkeep. At that time, several other states had barn preservation organizations, but Indiana did not. I believed Indiana needed a barn organization that would focus on helping barn owners maintain their barns, both through educational support as well as financial support. I placed a call to Gwen Gutwein that day, and she agreed to join me in starting this organization.” The shape and construction of Indiana’s barns tell a migration story. | Photo courtesy of the Indiana Barn Foundation

Rahe admits that IBF doesn’t always meet its monetary goals, but the organization is growing and she is confident in its future. “We will continue our efforts,” she says, “and our current board of directors continues to attract well-connected people with backgrounds in agriculture, historic preservation, architecture, and the arts.”

In recent years, many other people are repurposing barns as concert and wedding venues, recording studios, and event centers.

For me, a twenty-something Indiana native who grew up “in the country,” playing in the hayloft on the old family farm and chasing chickens in the neighbor’s big red barn was just a part of childhood. I never considered the livelihood that my family and my friends’ families forged from inside those creaking, lonesome buildings. They put up hay, milked the cows, stabled the horses. We poked in the dust, swung from the rafters, tried to peek at the turkey vultures roosting in the hayloft. I’ve come to gain an appreciation for the Indiana barn, that stalwart keeper of something much older, much bigger than us. The barn, or a parking lot and just another shopping center?

Rahe’s answer is clear: “It is encouraging to see the rise in the use of barns as wedding venues, which shows that young people appreciate barns enough to hold their weddings in them. Nobody wants to see our barns disappear from the Indiana landscape!”