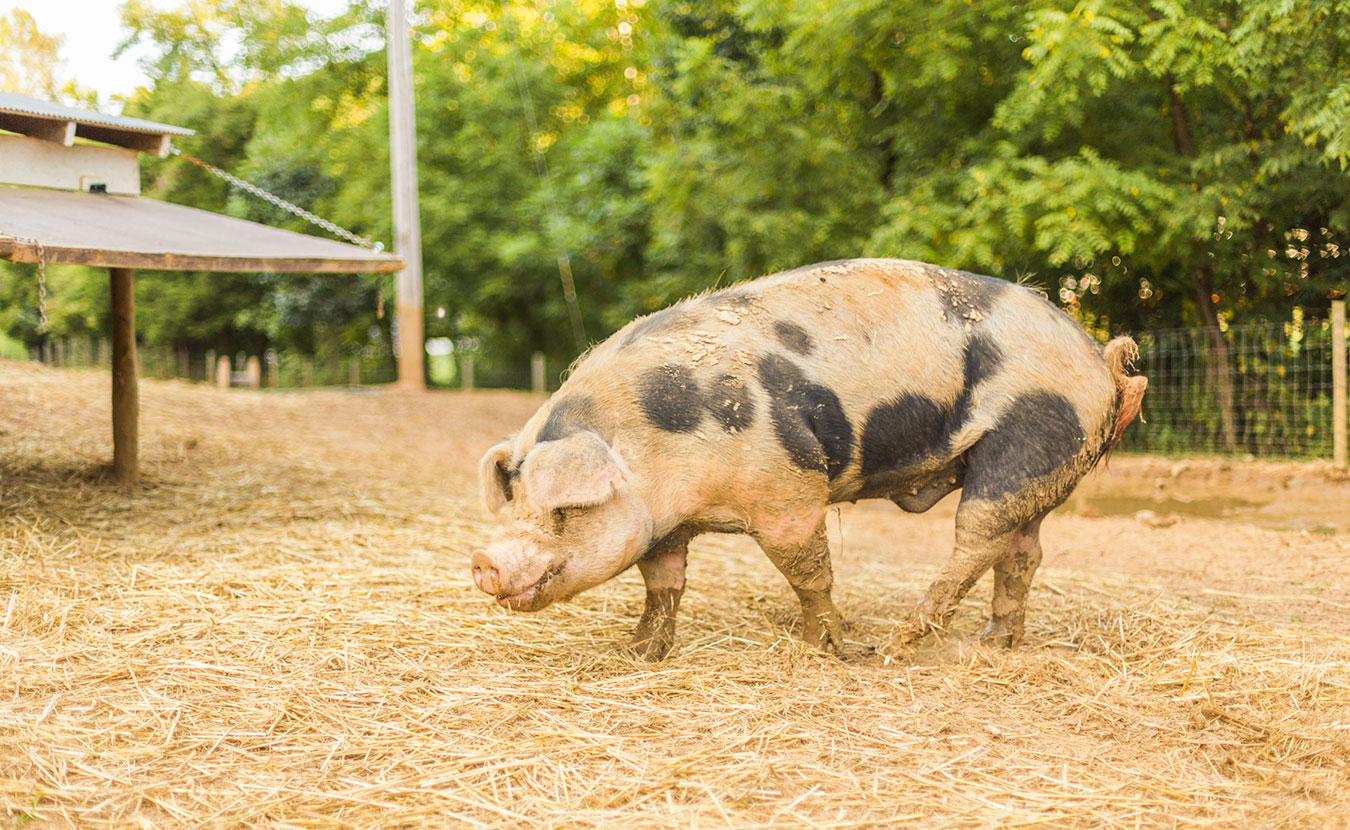 Some Hoosier farmers raise millions of animals that spend much of their lives in confinement — their sole existence in these “Confined Feeding Operations” is to get plump enough for market. But some of these animals, such as the pig pictured here, are rescued and find their way to Uplands PEAK, a farm animal sanctuary. | Photo by Alexianna Mundy, Paulina M Photography

Sue is a lovely shade of pink with black patches. She runs full-tilt across fields, lounges in sunbeams, chomps on fresh apples, and especially enjoys belly rubs. Thanks to Mark and Michelle Pruitt, Sue won’t end up on anyone’s plate. The husband-and-wife team co-founded Uplands PEAK Sanctuary, where Sue and 30 other rescued farm animals live, helping to educate visitors about veganism and sustainability. “We’ve had about 1,900 visitors since 2014,” says Uplands PEAK President Michelle Pruitt. Currently, they have 20 acres, including eight for pasture. In April, Uplands PEAK (“PEAK” stands for “People, Earth, and Animals in Kinship”) is moving to a 105-acre farm in Freedom, Indiana, about 25 miles west of Bloomington.

“Our mission is to get visitors to come to the sanctuary and experience the sentience of a cow or a pig or a goat,” Michelle says. They started the nonprofit in 2012 after reading Farm Sanctuary by Gene Baur. “I learned about everything that animals go through to end up as food,” Michelle says. “From there, we knew we wanted to do something different.” 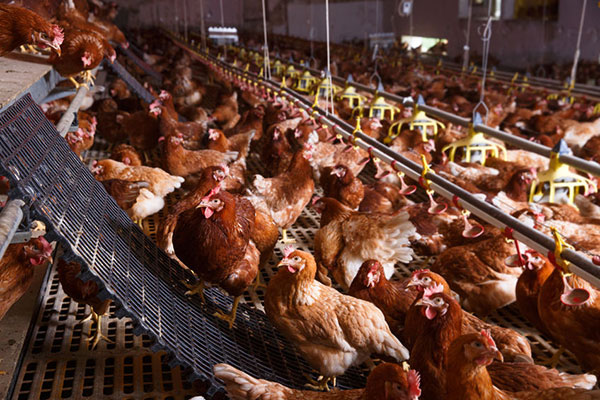 Unless you closely look at every egg, wedge of cheese, or brisket you buy — and the farmers responsible for them — odds are you’re a little removed from your food. Increasingly, animal protein originates from “Confined Feeding Operations” (CFOs). Paul Ebner, associate professor of animal science at Purdue University, explains, “A CFO is any type of farm that has a certain number of animals, and those animals are kept in confinement for more than 45 days a year.”

For farmers like Indiana State Representative William Friend, a late 1990s hog market collapse necessitated a shift away from traditional livestock rearing. “Most independent hog producers had to make hard choices — whether to stay in the business, get out of the business, or transition to working with an integrator to do contract feeding,” Friend explains. 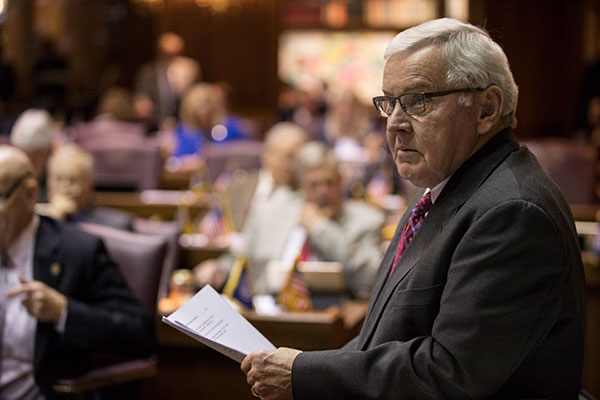 State Representative William Friend and his family are contract hog feeders. He describes the operation as a “Walmart philosophy expressed over agriculture.” | Courtesy photo

In 2000, his family built their first hog building and became contract hog feeders. “Our hogs are totally enclosed,” he says. The temperature is kept constant. Ventilation keeps the air circulating. Friend’s pigs also get fresh water constantly and a “well-adjusted feed source.” Their diet includes mostly corn and soybeans. They get medications, too, but, he adds, “We do not overuse the antibiotics.”

The result? “We probably do about 17,000 head a year, which is a major increase over what we could’ve done before,” Friend says.

He continues, “I call it the Walmart philosophy expressed over agriculture.” With the advantage of bulk purchasing, the contractors Friend works with get discounts on feed, supplements, and medications. Also, at slaughter, meat packers pay more for animal volume and uniformity. (One load of 160 pigs is more valuable than individual loads of 20 animals at a time. And if each animal averages 280 pounds and is roughly the same size? Even better.) “There are various reasons they get more money for their animals than the independent producer can get. It becomes a matter of economics and efficiency in the modern livestock production world,” Friend explains.

Animal welfare aside, critics point to environmental and human health hazards and reduced property values. A 2009 EPA report suggests animal agriculture generates more than one billion tons of manure annually with “significant portions” polluting waterways. But Barry Sneed, public information officer for Indiana Department of Environmental Management (IDEM) maintains, “IDEM-regulated CFOs operate under a zero-discharge permit. If a discharge does occur, the operator is responsible for cleanup and all associated costs.”

Uplands PEAK has a variety of rescued animals, from cows to chickens and roosters to goats. The Pruitts began the sanctuary after reading Gene Baur’s “Farm Sanctuary.” | Photos by Alexianna Mundy, Paulina M Photography

Barbara Sha Cox is a retired registered nurse and advocate with Indiana CAFO Watch. The group keeps one eye on Indiana’s impaired waterways list and the other on state and various county CFO rules. “There are some good CAFO guys who are trying hard,” she says. “They put [their operations] back away from everybody. They don’t spread manure close to any rivers.”

But not everyone’s squeaky-clean. “Some of them won’t pay attention to the guidelines,” Cox says. “They’re not supposed to put manure down 48 hours before rain, but they don’t care. They’ve got to get rid of it.”

The rules for CAFOs used to be even more strict. “In the past, they’ve had to have discharge permits, which go to the EPA, but that’s no longer required,” Ebner says. 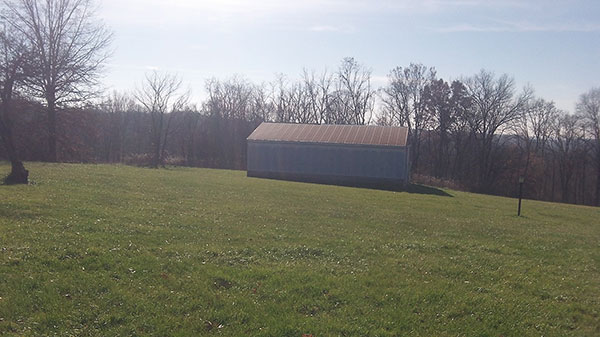 Uplands PEAK is moving to this bigger farm in Freedom, Indiana, which will allow them to take in more animals as well as more visitors, volunteers, and interns. | Courtesy photo

“Our current legislators really aren’t interested in [stricter laws], because it’s a financial thing,” Mark Pruitt says. From the Indiana Agri-Business PAC, Indiana Farm Bureau, and Indiana Pork Political Action Committee, among others, the agricultural lobby’s bench is deep and well funded. A grass-roots lobbyist at the Statehouse for years, Cox recalls one day when a formerly supportive legislator voted against Indiana CAFO Watch interests: “I thought, ‘He has always been for us!’ So, at noon, I looked up his donations, and guess what? I knew why he had voted against us.”

Whether a farm is large-scale or small, Purdue professor Ebner doesn’t see modern agriculture as a zero-sum game: “There’s nothing that says, ‘Only this way is profitable.’ Animal agriculture is a big tent, and there’s room for a lot of different ways to do things.”

Meanwhile, the Pruitts will keep doing things their way — soon on an even larger scale. The Uplands PEAK move will enable them to take in additional rescued farm animals and host extra interns, volunteers, and visitors. An Uplands PEAK event is set for Serendipity Martini Bar in Bloomington (6 to 9 p.m.) on March 22. And a crowdfunding campaign seeking $230,000 — for fencing, barn stalls, and moving expenses — runs until March 26.