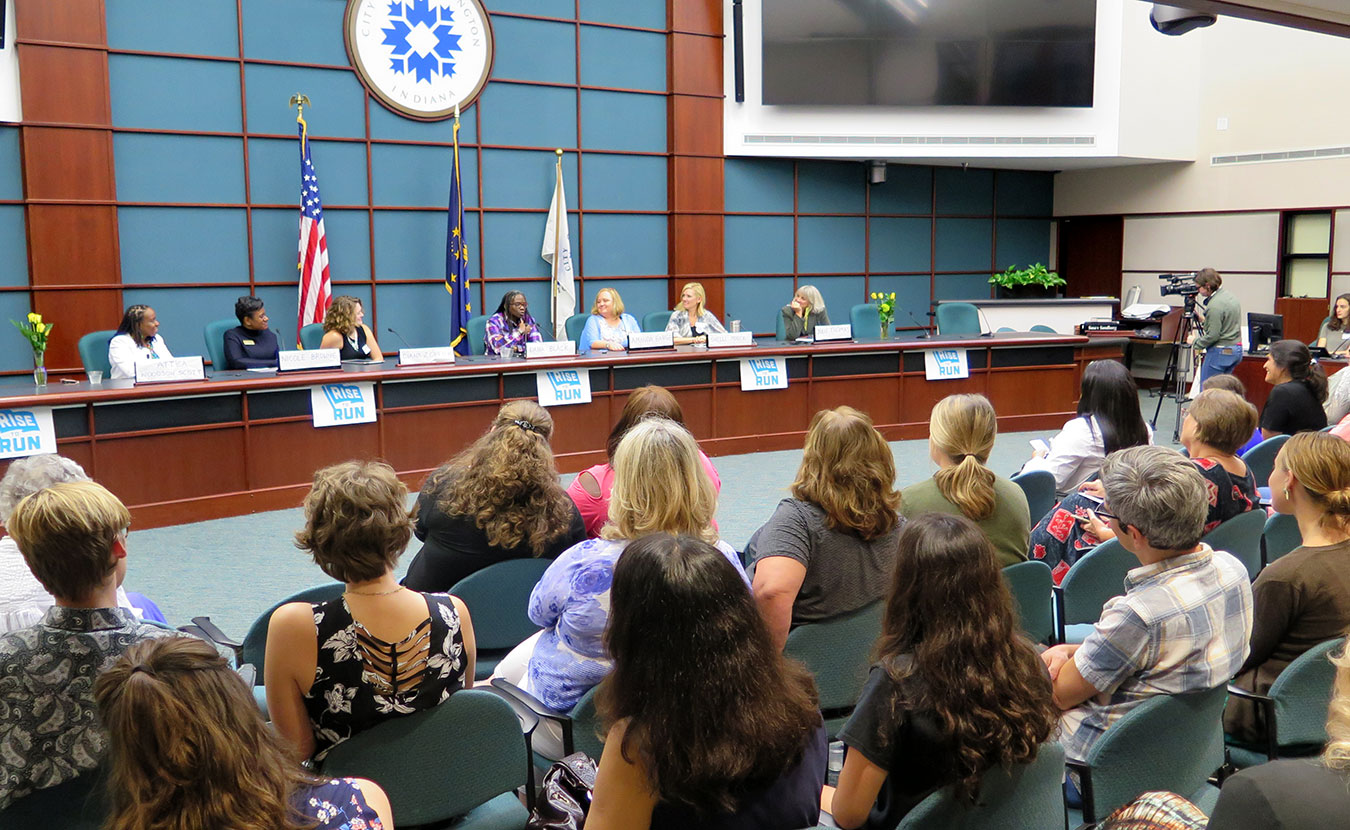 Rise to Run is a new grassroots movement whose goal is to mobilize young progressive women to run for office. The Bloomington hub of the organization hosted its kickoff event in the Council Chambers of Bloomington's City Hall on September 17. | Limestone Post

“Frankly, women haven’t really been given the chance,” says Shay Upadhyay, a senior at Bloomington High School South, about women in politics. Shay Upadhyay, a senior at Bloomington High School South and a member of the Advisory Council for Rise to Run. | Courtesy photo

Upadhyay, president of the Indiana Coalition Against Domestic Violence Youth Council, is also a member of the Advisory Council for Rise to Run: Bloomington, a new grassroots movement whose slogan is “mobilizing young progressive women to run for office.” Bloomington is one of four pilot programs that train high school- and college-aged women, called “Risers,” on how to enter into politics.

Because Upadhyay knows from her advocacy work about the dangers of poor policy, she was immediately drawn to Rise to Run when she found out about the organization last spring. “People don’t really know how powerful women can be,” says Upadhyay. “In the past few years, we haven’t had a female mayor, and I think this is going to help women in the big picture, and in the little picture.” Bloomington hasn’t had a woman mayor since Tomilea Allison left office in 1995, and with the low number of women represented in all levels of government in the U.S., it’s impossible to predict the impact they could make in social change.

Women make up more than half of the U.S. population yet hold just 17 percent of elected positions, according to Rise to Run. The Center for American Women in Politics breaks it down by office: Only 24 percent of state legislators, 18 percent of mayors in large cities, and 19 percent of Congress members are women. The percentage of women of color is even smaller.

In Bloomington, however, things are a bit different, thanks to Regina Moore, former four-term city clerk and co-coordinator of Rise to Run Bloomington. When she ran for office in 2003, she was one of only two women running on the city’s ballot. She later founded the Democratic Women’s Caucus to help more women get into elected positions. Now women make up half, or more, of elected officials in the city and county, with four women on city council, four women on the Monroe County Council (three of whom are Democrats), two women on the Monroe County Board of Commissioners, and six women judges on Monroe County Circuit Court. “We’ve caused a stir,” says Moore.

Knowing firsthand the results that come with creating an encouraging, supportive space for women candidates, Moore sees the value in Rise to Run’s hands-on, comprehensive training and direct mentoring. Rise to Run reports that the average age of women who run for office is 47. As younger women, neither Moore nor the other co-coordinator, Rachel Guglielmo, considered politics a viable career option. While Moore was later inspired by California Governor Jerry Brown, Guglielmo realized, after a career in international development encouraging civic engagement abroad, there was a lack of political involvement in the U.S. “I’ve learned it’s extremely important for individuals to be part of making the change happen,” says Guglielmo, who is also an activist for Moms Demand Action for Gun Sense in America. Now she’s determined to help young women enter that space.

The training teaches Risers the fundamental tools of running and winning a progressive campaign, such as understanding the electoral process, fundraising, budgeting, endorsements, and overall strategy and planning. However, there is a lot more stacked against women than simply not having these skills. Gender imbalances are still a big influence in politics. Women candidates tend to be more quickly ridiculed for irrelevant things like physical appearance or the sound of their voice. Vanderbilt University Associate Professor Cecilia Hyunjung Mo, who researches hidden gender bias in elections, explains that women also have to be careful in the political arena to be deemed qualified. Crying or showing vulnerability, she says, is out of the question. They have to emphasize they’re well versed in “male issues” such as security and economics. They’re taught to be nice, humble, and nurturing rather than forceful and assertive — necessary qualities of candidates.

While most people explicitly say they’d vote for a woman candidate, Mo found people are more likely to choose a man over a woman candidate, even when the two have equal qualifications. However, she explains that people are “malleable,” and she encourages women to run. “If women don’t put themselves out there,” she says, “then there is not going to be an example of what a woman leader can look like, and it’s those examples that need to be created so that people become much more comfortable with what a leader looks like.” In high school, young women hold leadership roles, but that’s because the environment is more community and collaborative focused, explains Connie Wang in a recent Refinery29 article. Things change in college, when student politics become more aggressive and confrontational. So for young men, writes Wang, “even if they lack the sense of service, they know how to project authority.” And, just like that, women have already lost in the political sphere.

Rise to Run gives young women the training they need to jump into this competitive space. For Upadhyay, learning the debate and advocacy skills is one of the reasons she’s participating in the program, not necessarily because she plans to run for office. Young women have shown a strong interest in Rise to Run since the organization announced its plans to launch in Bloomington. | Limestone Post

Rise to Run began in the aftermath of the 2016 presidential election. Formed by a group of women politicians and activists, it initiated pilot programs in four cities: Durham, North Carolina; Madison, Wisconsin; San Francisco, California; and now Bloomington. Since the organization announced its plans to launch in Bloomington, several young women have shown a strong interest. “It’s really exciting to see how receptive they are to the idea of receiving this kind of encouragement,” says Guglielmo, “and how motivated and interested they are to engage and affect the world around them.”

Bloomington has many advantages for women, such as access to both a college campus and a thriving community, strong mentors, and an already significant buy-in from local politicians. The official kickoff and sign-up event for Rise to Run Bloomington was held on September 17 in the City Hall Council Chambers, with keynote speaker Attica Woodson Scott of the Kentucky State Legislature, national organizer Eileen Soffer from San Francisco, and a panel of women politicians and experts.

Moore and Guglielmo have high aspirations for the Bloomington program, and not only getting more young women to run. Guglielmo says they’d like to see Risers working on campaigns for women who are running for elected positions at all levels of government, and Moore says she hopes more women get into pipeline positions traditionally given to men so they can have more influence over financial decisions at both the city and county levels.

Bloomington will soon have proof of the program’s effectiveness, with the 2018 elections just around the corner. Opponents should be prepared: There’s already an army of Risers planning to transform the political landscape.