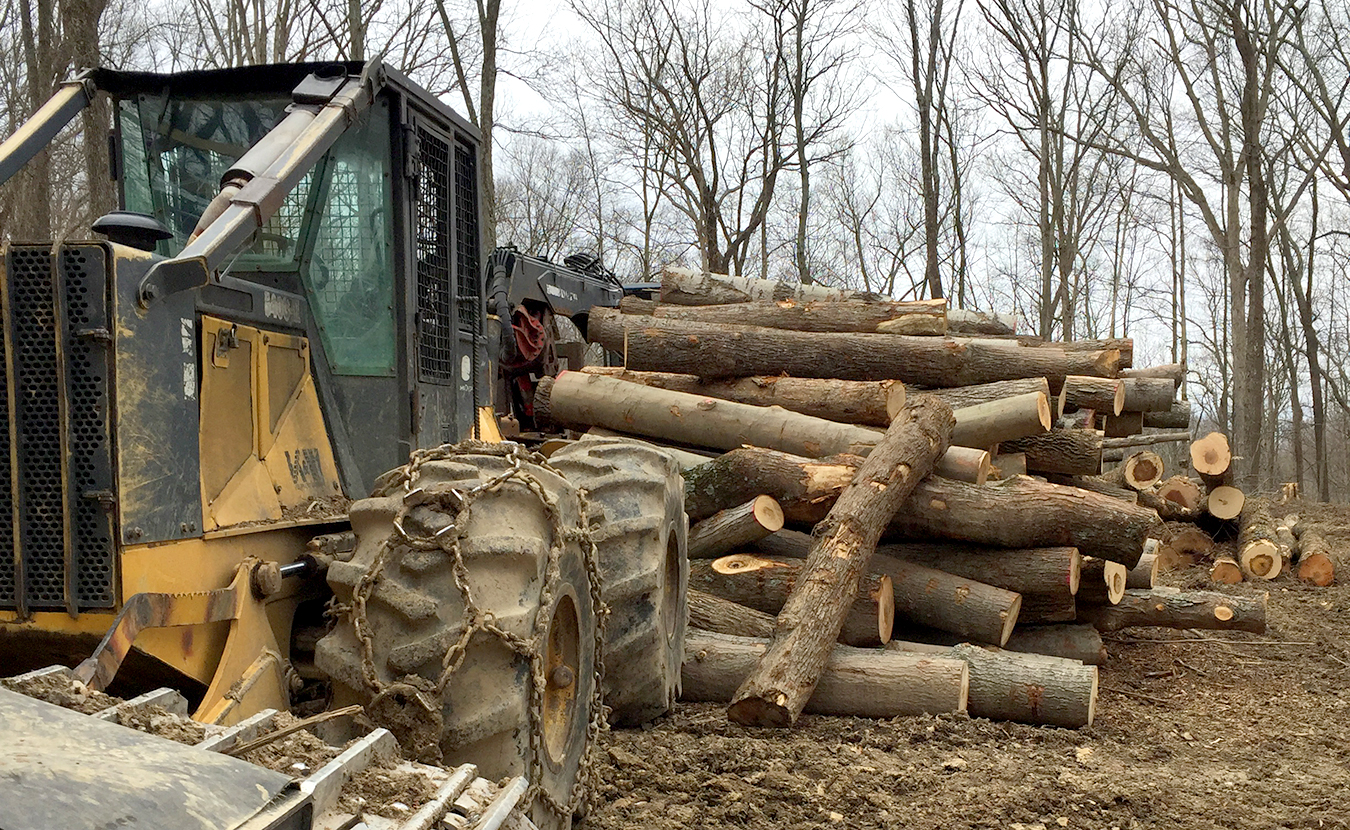 A bill passed by the Indiana House in February aimed to limit a local government’s authority, but not the state’s, over the right to harvest resources, such as timber, on personal property. The bill died in a Senate committee, but balancing personal property rights with the rights of others who might be affected is an ongoing battle. | Limestone Post

During the recent Indiana legislative session, which ended March 14, House Bill 1289 (HB1289) passed the House but stalled in the Senate. Proponents of the bill, which would allow for fewer regulations on the development of natural resources (such as harvesting timber) saw it as a check on local government overreach and a win for personal property rights. Authored by Indiana State Representative Jeff Ellington (R, District 62), the bill would have restricted these local entities’ ability to regulate the “extraction of mineral resources” and “the sale or removal of merchantable timber” on private property. (Ellington has a commercial interest in J.R. Ellington Tree Service but maintains the association is not a conflict.) 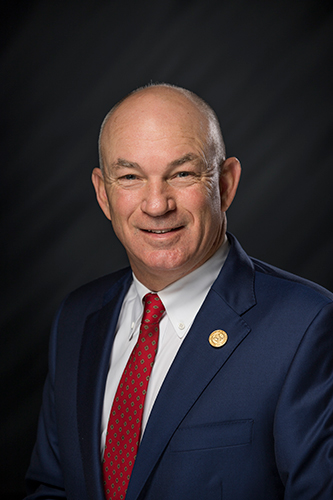 “My bill protects assets from encroachment from residential structures and subdivisions that were placed near these assets’ [natural resources],” he explains. Ellington provides an example: You have 100 acres of wood planted by your grandfather. By harvest time, eight homes have popped up around you because your neighbor parceled out a large property into multiple properties for their kids. “Now, instead of having 100 acres with normal setbacks and a normal, good forestry plan, you have the planning jurisdiction come and say, ‘Hey, that 100 acres of trees there? We’re going to set back a 20-acre parcel here that you can’t do any cutting on. You have a karst feature here.’ Or maybe it’s not a karst feature, but it looks like it, and they put [additional] set-asides on that.”

He continues, “Pretty soon, no timber company is going to come and work in that area, because it’s not profitable. You’ve taken that harvest area and [reduced it] by half or more. Those are some of the takings that have been happening for years.”

Subject to local regulations, “urban areas” are currently defined as having at least eight residences within a one-quarter-mile-square area. HB1289 would have redefined these “urban areas” as having at least 20 residences — reducing the amount of private land affected by local regulations. HB1289 would also apply to “all lands and lots within the corporate boundaries of a municipality” and “other lands or lots that have been or are planned for residential areas contiguous to the municipality.” While plan commissions, boards of zoning appeals, and local governments at the county, city, town, or township levels historically would have some degree of regulatory power in such a wide geographic area, under HB1289, such entities would not be authorized to regulate the “development of natural resources” on private property in these areas.

Groups including The Hoosier Environmental Council and Friends of Lake Monroe expressed concerns about the bill’s potential environmental impact. Timber and other natural resources removed from environmentally sensitive areas can cause erosion and contribute to sedimentation and chemical run-off in area lakes.

HB1289 crystalizes one of the state’s oldest, most polarizing debates: private rights versus public good. “With forestry — both in the state forests and on private land — we’re always worried about the next generation,” says Ron Morris, co-editor of The History of Indiana State Forests. “How do we prepare the next generation to be the leaders of a democratic society and to balance individual needs with the needs of the community?”

Morris, who is also a Ball State University history professor, has studied the establishment of Indiana’s state forests, the resurgence of private woodlots, and the differing goals behind conservation and preservation. “When the first state forest was established, we had real concerns about whether we’d have any forested land in the future,” he says. “We were cutting down two trees for every one we were planting.” 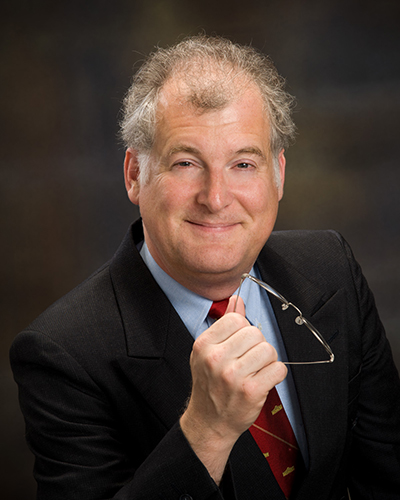 In the 1920s, Indiana’s state forests were created to ensure a steady, managed timber supply. “The idea was we would always have forests to provide the timber needs of the state. Of course, the state forests are just a small portion of the amount of timber resources we have, compared to the private holdings now,” Morris says. As for those holdings? “There are people who’ve tended them for 40 years, enjoyed them, and the big question is what happens in the next generation?” he says. “Will they have the same idea of stewardship? Will they be looking at [the trees] for rapid cashflow? What happens in the next generation is a concern.”

Indiana’s state forests existed to supply timber. But Indiana’s state parks? Those were about preservation. “The idea behind them was, ‘We’re going to preserve the natural features of Indiana for multiple generations of the future,’” Morris says. That meant setting aside forested lands for public enjoyment, rather than for timber harvests.

Historically, Indiana governors and legislators have readily listened to the voice of citizens. In part, the establishment of state parks had been a response to the needs of increasing numbers of city-dwellers. “State parks [provided] a space for people from overstressed urban areas to come and experience the [rural environment] that many people had grown up on,” Morris notes.

And, despite the fact that state forests were originally created as timber supply, societal needs have even shaped the way some of this land is used and managed. During President Franklin D. Roosevelt’s New Deal, “multiple use” areas — complete with newly constructed picnic areas, fishing lakes, shelter houses, trails, and more — were created as public works projects to help put men back to work. One result? “You get people who are using the state forests as parks,” Morris says. “Because of that, you start having a mix of ideas. People get confused as to ‘What is the role of the state forest?’ and ‘What is the role of the state park?’”

Fast-forward to 2018, and much has changed. The public’s increased personal use of state forests has engendered a conflict of values. These areas were originally created for timber harvest, but, as people grow attached to the state forests they’ve visited, they are less likely to want to see woods removed. In the case of timber harvests from private lands — particularly lands within environmentally sensitive areas — the actions of private landowners can negatively impact the public good. Further complicating matters? The degree to which special interest groups now influence the legislative process. 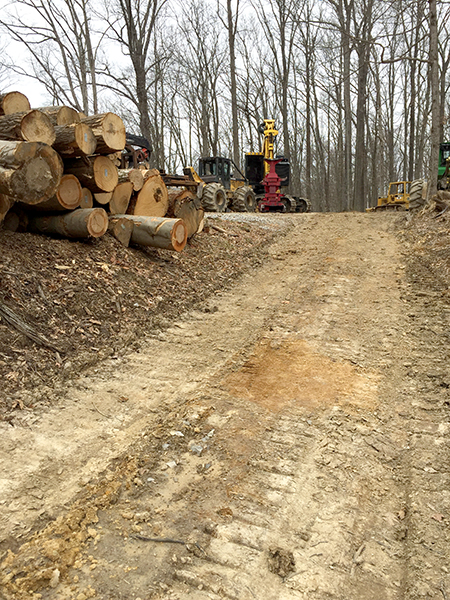 Logging on private property often requires heavy machinery, equipment, and vehicles, and the roads to haul them. | Limestone Post

For its part, HB1289 could serve as a case study in campaign finance. According to Greg Ellis, vice president of environmental and energy policy for the Indiana Chamber of Commerce, “The Indiana Chamber supported HB1289 because it would have fixed past and current problems that Indiana businesses have experienced with local government trying to prevent actions already allowed under state permits or Indiana law. We believe the measure would have led to a reduction in unnecessary litigation costs for both property owners and other taxpayers.”

Indiana Business for Responsive Government (IBRG) is the self-described “non-partisan political action program of the Indiana Chamber of Commerce.” Between January 1, 2016 and December 31, 2017, IBRG directly contributed more than $15,000 to Jeff Ellington’s campaign. Ellington earned a 100 percent rating for 2017, according to IBRG’s 2017 Legislative Vote Analysis.

Ellington’s far from the only candidate with special interest backing. Between January 1, 2016 and December 31, 2017, IBRG financially supported 78 Republicans and one Democrat. Of the group’s direct and in-kind funding, 97 percent went to Republican legislators or Republican-identifying organizations. Of its “non-partisan” designation, the Indiana Chamber of Commerce’s vice president of political affairs, Jeff Brantley, says, “We are open to endorsing legislators, Republican or Democrat, who share our overall priorities which are rooted in our Indiana Vision 2025 economic development plan.”

Asked whether he’d revise HB1289 for future consideration, Ellington says, “You never know. I couldn’t tell you that until next year.” Similar legislation could easily be reintroduced. Alternatively, its provisions could be added as an amendment to a different bill. With that possibility in mind, environmentalists closely watched the May 14 one-day “special session,” during which legislators hoped to act on bills that had been eligible for voting at the end of the last regular session. But no part of HB 1289 was added to the five bills passed in the special session.

After passing in a House vote of 63-27, HB1289 died in the Senate’s committee on natural resources, but the ongoing conflict it represents is still very much alive.