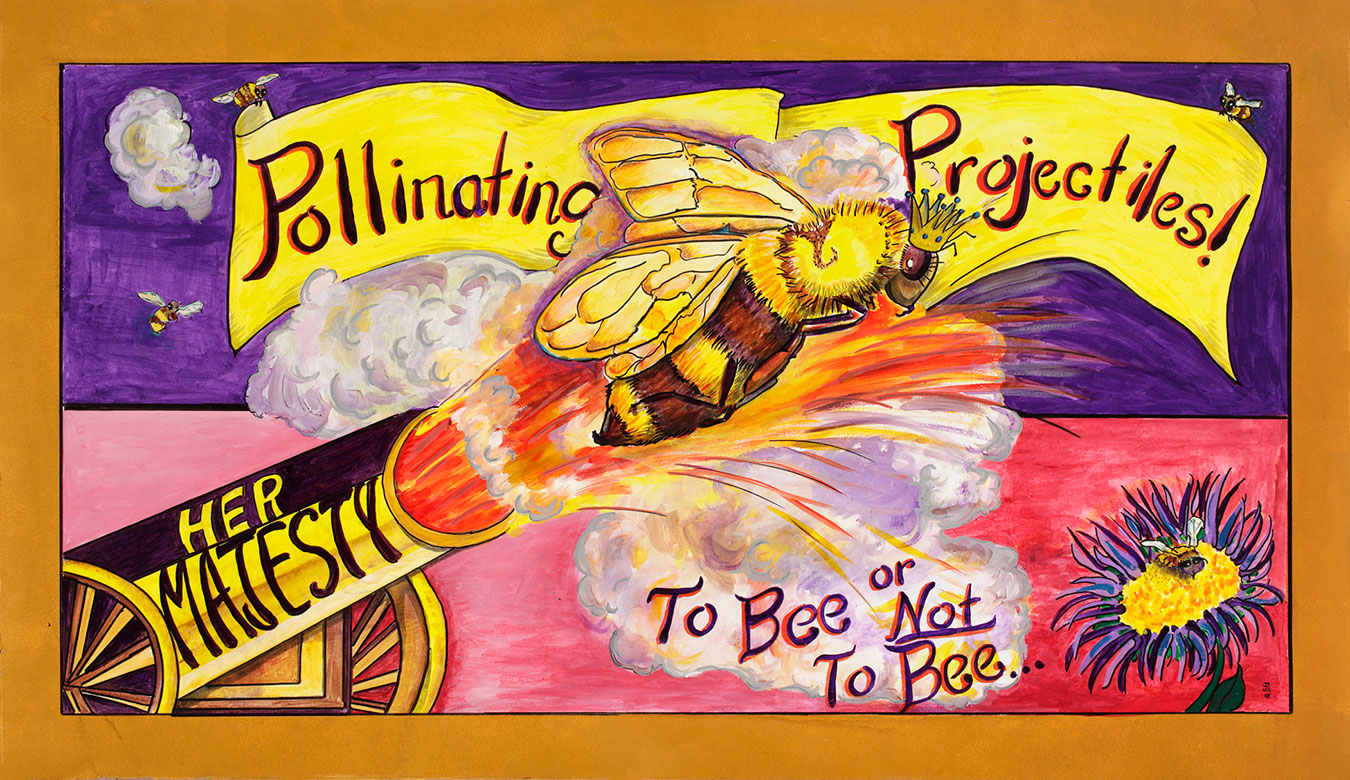 “Pollinating Projectiles!, To Bee or Not To Bee” is one of many paintings in Joe and Bess Bohon Lee’s exhibition, Professor Animalia’s Menagerie of Struggling Species. The show will take place throughout the month of April at Blueline Gallery. | Courtesy image

“LAAAADIEEES and Gentlemen, Boys and Girls, here we have Vaquita, the world’s smallest species of porpoise, only discovered in the late 1950s. So, what has happened to this beautiful Mexican Mermaid that swims off the coast of Baja, Mexico? They are only seen — this mysterious beauty of the deep — when they are caught in fishermen’s nets. And once we have discovered them, they are so soon lost to the world.” 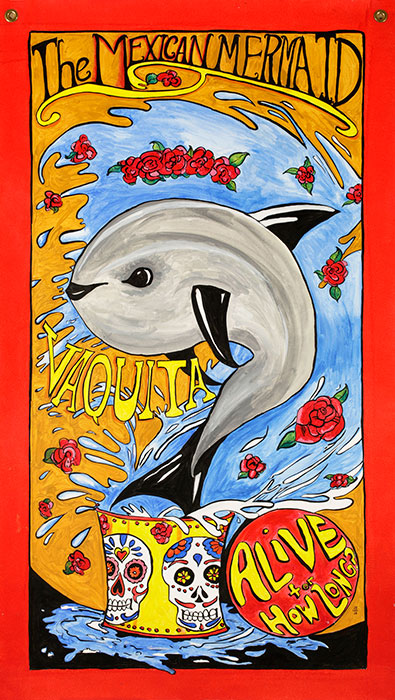 Those lilting, ominous tones belong to Professor Animalia, the circus spieler also known as Joe Lee, who invites you to step into his tent and witness “Professor Animalia’s Menagerie of Struggling Species.”

Inside that tent — Bloomington’s Blueline Gallery, 212 W. 4th St. — you can witness with your own eyes an exhibition of more than a dozen large paintings of endangered species, done in the style of circus midway banners complete with text. It opens Friday, April 6, from 5 to 7 p.m. and continues throughout the month. You can buy the paintings, plus preparatory drawings, reproductions, coloring books, and T-shirts.

Subtitled “Save The Animals / Save Yourself!,” the exhibition is the creation of husband-and-wife artistic team Joe and Bess Bohon Lee and is timed to coincide with Earth Day on April 22. In addition to the exhibition, Bess will lead a four-class workshop for the students of Roy Reynolds, art teacher at Fairview Elementary School, which will include a field trip to see the art at Blueline.

Joe is quick to give credit to his wife: “Actually, it was Bess’s idea to do this,” he says of the exhibition.

“There’s so much right now that has us concerned,” Bess says of the exhibition’s genesis.

She honors the mentors who taught her: “‘When it’s bad, see what you can do positively.’ So it was like, take that worry energy and put it into something positive.”

About two years ago, when the project originated, Joe had recently finished creating a tarot deck in which each card features a circus or sideshow image with a short text.

“It hit me,” Bess says. “What would it be like to do the death-defying acts that are posted on the banners of the exotic sideshow exhibits? What if you did that with animals that are really endangered?”

Joe hops over to their dining-room studio and returns with the banner of Vaquita, the Mexican Mermaid, as an example. According to the World Wildlife Fund, the vaquita, a tiny porpoise found at the northern end of the gulf between Baja California and mainland Mexico, was only discovered in 1958. Now, 60 years later, fishermen’s nets have depleted its numbers to 30. 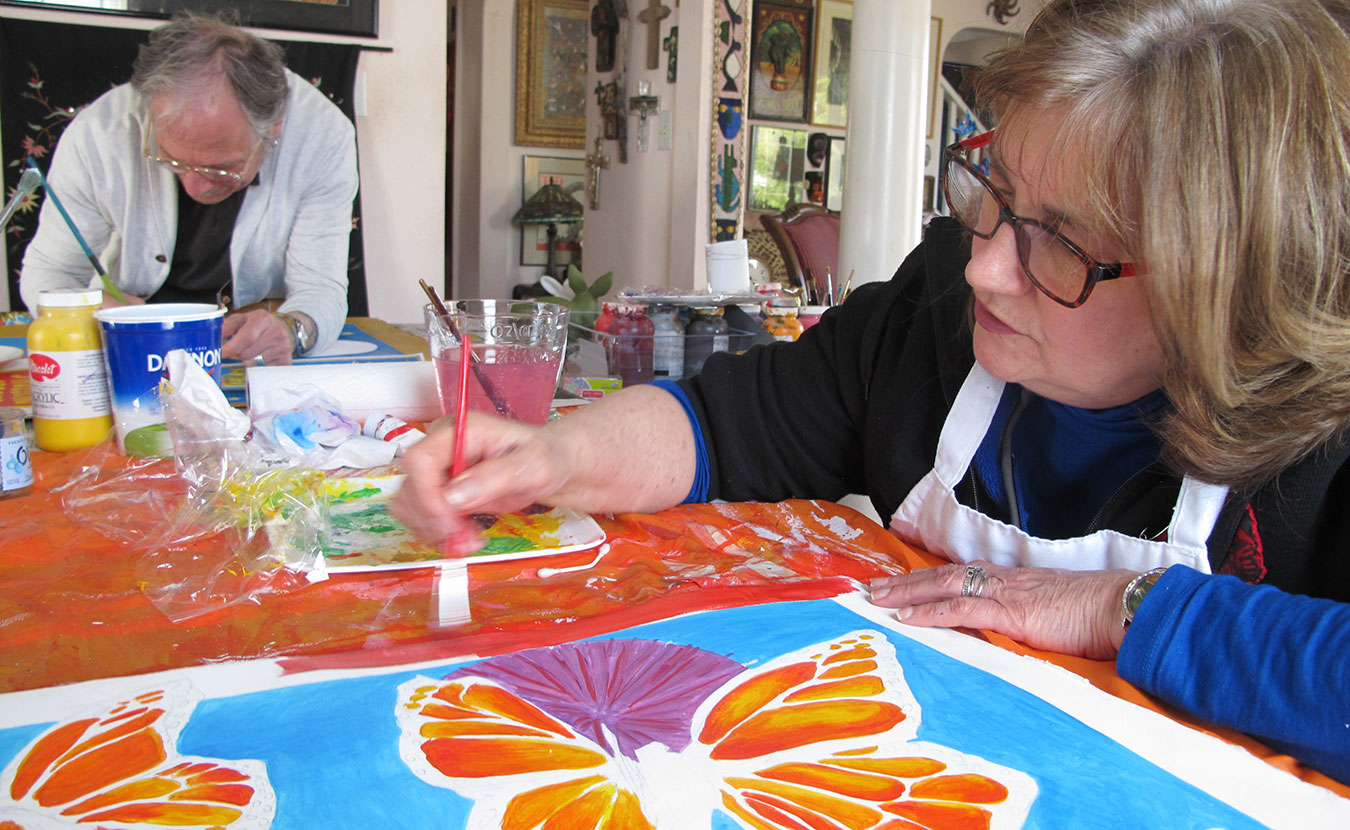 Joe, left, and Bess are collaborating for the first time for their Animalia exhibition. | Photo by Claude Cookman

As Joe rhapsodizes on the beauty of this water mammal, with its silvery skin and eyes ringed in black, Bess holds her hands about 18 inches apart to indicate its delicate size.

“A lot of the traditional sideshow banners, like Spidora, the Spider Woman, are sensationalistic,” Joe explains. “And the texts say something like ‘Alive, Inside.’ Well, for Vaquita, it says, ‘Alive, For How Long?’”

Listening to Bess and Joe, it’s impossible not to catch their passion for this exhibition. Their sentences tumble on top of each other, sometimes completing each other’s ideas, sometimes veering in a new direction. Joe wants to talk about the white rhino. Bess jumps in with the bee hummingbird, about the size of a penny and severely threatened by habitat degradation. They point to their announcement poster that shows an elephant, balancing on one finger of a human hand. Other endangered species in their exhibition include orangutans, giraffes, polar bears, honeybees, narwhals, and eastern lowland gorillas. 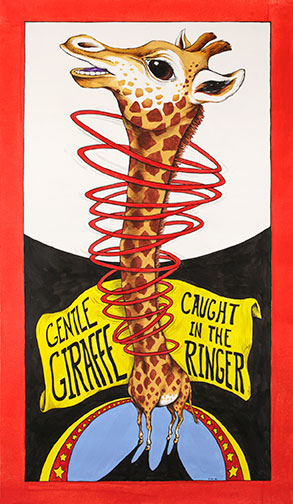 Joe is known for his editorial cartoons in the Saturday issues of The Herald-Times. After graduating from Indiana University with a degree in history, he studied at the Ringling Brothers, Barnum & Bailey Circus Clown College in Sarasota, Florida, then spent five years working full time as a clown and an additional 25 years doing spot performances with the Ringling Brothers, King Brothers, Hoxie Brothers, and Bloomington Community circuses. He’s the proprietor of Cirque du Jolais and Jungle Joe’s Flea Circus. He’s also an illustrator with countless credits, including more than a dozen books in the For Beginners series, many of which he also wrote. His day job is as facilities assistant for the Bloomington Township Trustee.

Many area residents will remember Bess as their elementary art teacher from her nearly 30 years in the Mitchell Community Schools and Monroe County Community Schools. She earned a bachelor’s degree in social work from the University of Georgia and a master’s in art education from IU, and she studied drawing and painting in Italy and Mexico. She has received numerous grants, which she typically spends on materials for her students.

This is the first time in their 20-year marriage they have collaborated. “It’s been a mish-mash,” Bess says. “I’ll create one of my quick sketches, and then Joe will turn it into a very sophisticated illustration, and then I turn it into a painting. It’s been really fun!”

“Bess’s work is much more painterly than mine,” Joe says. But he’s trying to catch up. After years of drawing illustrations, he enthuses, “I’m just absolutely enjoying the physical act of painting.”

A catalyst for the exhibition is Jim Poyser, a collaborator of Joe’s and former editor of the Bloomington Voice and Indianapolis’s Nuvo, who now heads the nonprofit Earth Charter Indiana. Poyser works with Indiana schoolchildren to foster a reverence for life and promote sustainability. He will speak at the opening. 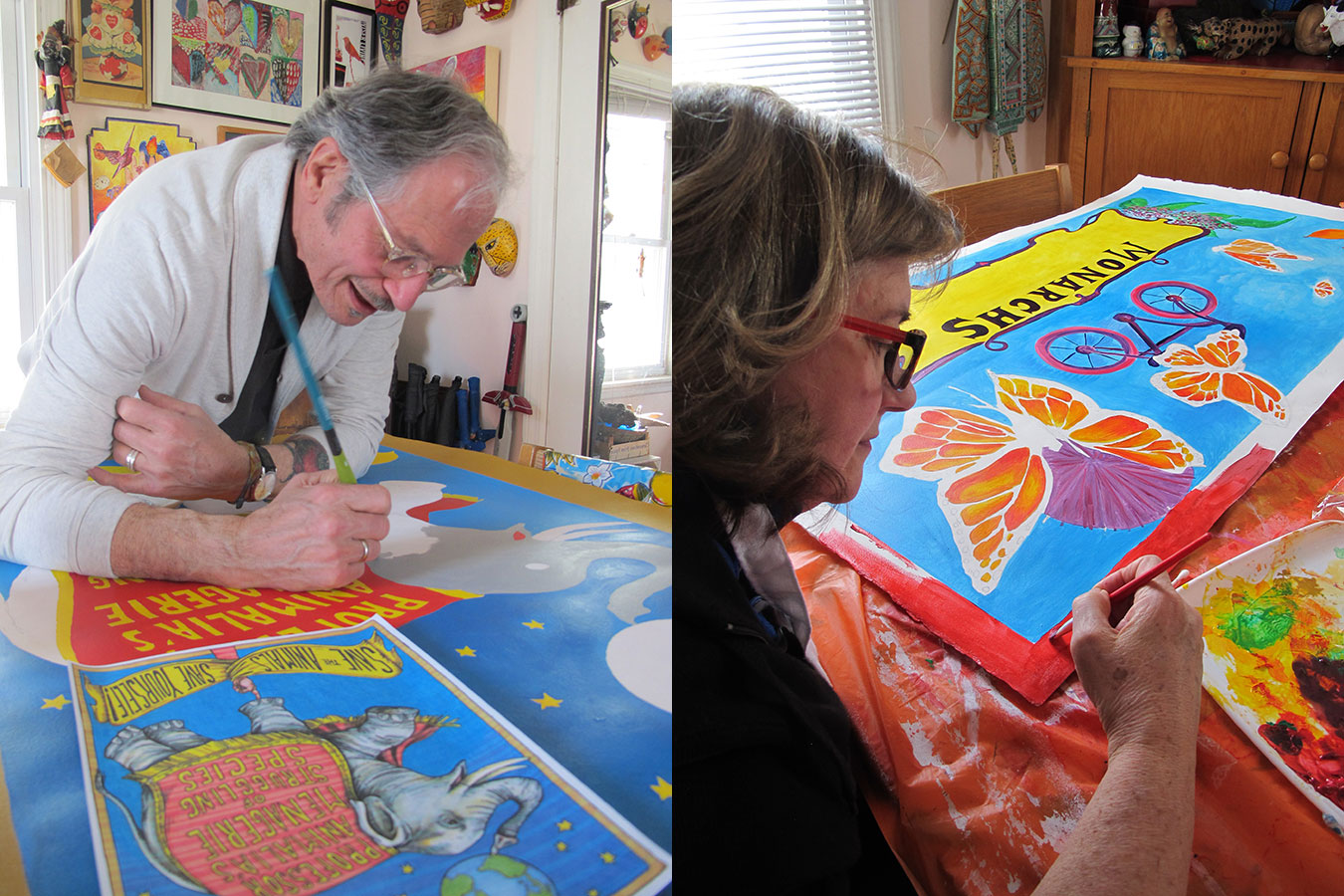 Joe, left, and Bess paint some of the posters in their dining room studio for their Animalia exhibition. Their house, filled with paintings, folk art, masks, and customized furniture, is on the cusp of Bryan Park. | Photo by Claude Cookman

The Lees will donate 30 percent of all proceeds to the Indiana branch of Earth Charter.

They are in absolute unison about one thing: This is only the beginning.

“I think this is To-Be-Continued,” Joe says. “It’s not that we’ve done it, now we’re finished. … We’re going to find ways to continue it.”

“I could see doing this ’til I die,” Bess says, “something with animals and art. It seems like a vocation, a calling.”

Claude Cookman enjoyed a professional career of more than 18 years in journalism, primarily as a picture editor. In the early 1970s, he earned an MS from the Columbia School of Journalism, specializing in magazine writing. In the early 1990s, he earned an MFA in art history and a Ph.D. in the history of photography, both from Princeton University. For more than 24 years he taught visual communications at Indiana University, where he is now a professor emeritus. He’s authored four books and numerous articles. He is most proud of serving on the board of the Kinsey Institute, including two years as chair. He enjoys cooking, drawing, and reading world literature. He hopes to return in his next incarnation as a pastry chef.
Tagged
Comments