PRIDE — and Its Film Fest — More Inclusive Than Ever 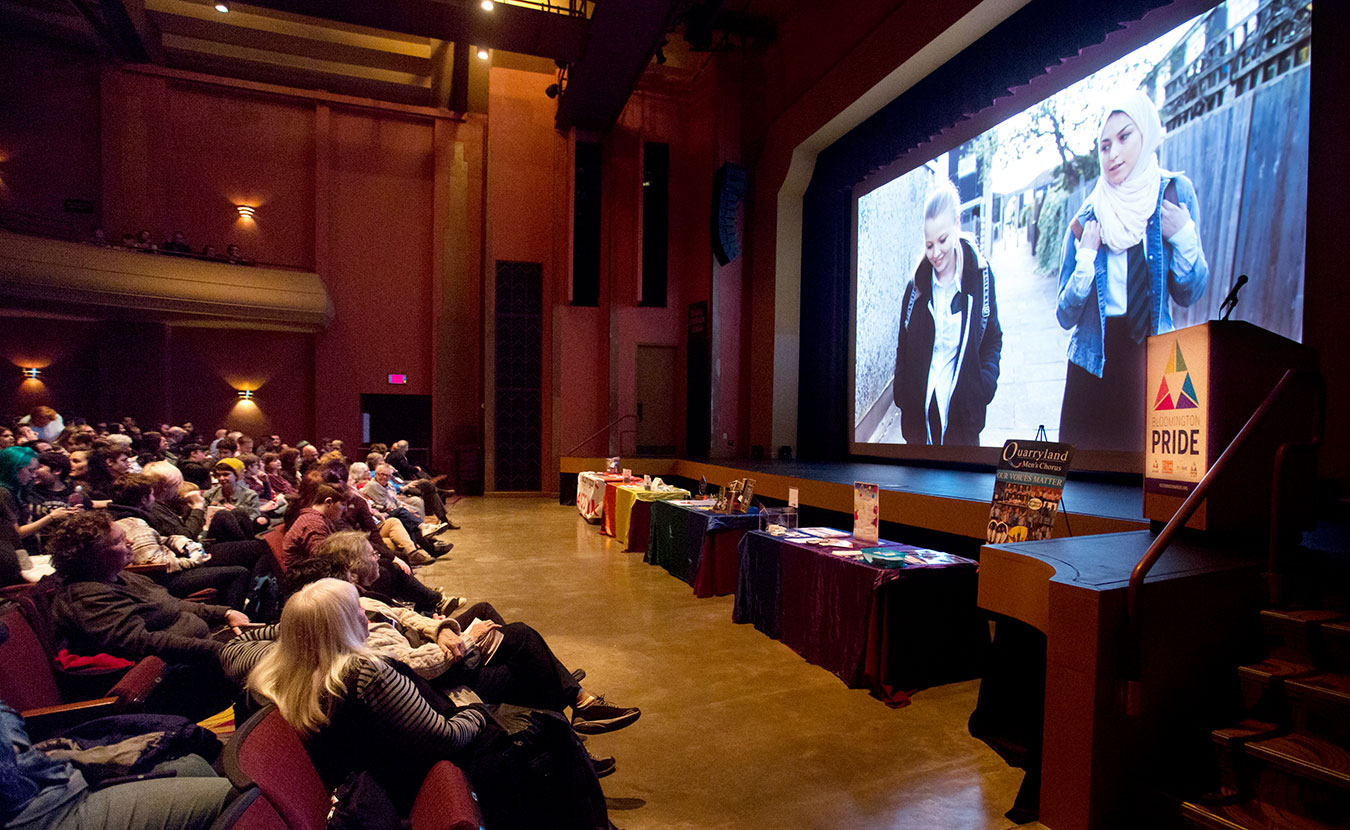 Bloomington PRIDE, the local organization that represents the LGBTQ+ community, is “focused more on helping people on the margins,” says Board Chair Janae Cummings. | Courtesy photo

This weekend’s 16th annual Bloomington PRIDE Film Festival, like past years, will inspire many to get involved with Lesbian, Gay, Bisexual, Transgender, and Queer (LGBTQ+) issues in ways they haven’t before. And PRIDE itself, says Board Chair Janae Cummings, has also expanded the “depth and breadth of service provided to the community.”

It was at the 2016 film festival that Cummings, who had been interested in PRIDE for a number of years, met then-chair Justin Ford.

“I’m a black, bisexual woman, and I didn’t see anyone who spoke for people like me,” explains Cummings, who works in the Office of the Provost and Executive Vice President at Indiana University. “I was motivated to ensure both people of color and those with identities outside lesbian and gay had a voice. The PRIDE board of directors saw and appreciated that passion and voted me on to the board.”

Vice Chair of the Board Kyle Hayes first connected with PRIDE by serving on the screening committee for the 2014 film festival. Hayes works in IU’s Office of Overseas Study. Of PRIDE, he says people can “expect a recalibrated vision: PRIDE’s aim is to become more engaged and involved with community partnerships, to continue bringing forth the voices that are most marginalized and most often underrepresented.” In 2014, Bloomington PRIDE, Ltd. began as a volunteer-powered 501(c)(3) nonprofit to support the annual PRIDE Film Festival, which had been growing since its debut in 2003. During its four years, the group has evolved from being mostly an arts organization to a service-based organization for the LGBTQ+ community of Bloomington and south-central Indiana, according to their mission, “through advocacy, safe and inclusive spaces, arts and cultural events, and educational programming.”

Cummings adds, “We’re working to be a truly intersectional organization that addresses the issues of people on the margins of our community. This includes people of color, transgender and nonbinary people, undocumented immigrants, and those with disabilities.”

“What has changed over the last year,” says Cummings, “is that we are focused more on helping people on the margins or who often aren’t visible. PRIDE has always spoken up for the LGBTQ+ community on issues like marriage equality, but we weren’t talking about issues such as race, transgender rights, and stigma around gender identity. We’re making sure that, in the spirit of pride’s true roots as a protest, we are all liberated, and not just a few of us. We don’t want to leave anyone behind.”

Cummings’s goal is for people to know that Bloomington PRIDE will fight for their rights, for equality, and for fair treatment. She wants business leaders, teachers, and everyone else to have the resources to learn cultural competency and understand how to create a positive environment for everyone.

“We address this,” Cummings says, “through a range of methods from having direct conversations, hosting workshops and discussions, or presenting at conferences and meetings.” For example, a discussion during PRIDE’s summer street festival, Pridefest, invited folks to speak with transgender and gender nonconforming people from the surrounding area, as well as with advocates from the ACLU of Indiana.

Hayes recalls, “It seems like people had great questions while maintaining respect for the folks they were asking questions of.” Key concepts of this discussion included using people’s preferred pronouns and not misgendering anyone. Hayes explains other examples of cultural competency in the LGBTQ+ community include using inclusive language — like “partner” instead of “boyfriend” or “girlfriend,” which, depending on the use, can reinforce both heteronormativity and the gender binary — and not assuming every child has both a mom and a dad. An objective, he says, is “rewiring the way we talk to one another, not just assuming binary male and female roles.” Other examples include workshops addressing health and stigma against people who are bisexual (a group that can be stigmatized even among other LGBTQ+ people) by Brian Dodge, an associate professor of applied health science at Indiana University and associate director of the Center for Sexual Health Promotion, and a series kicking off PRIDE’s monthly workshops for 2018 that explores the roots of systemic racism and how it manifests in the LGBTQ+ community. Future monthly workshop topics will include homelessness and spirituality.

Another educational workshop was in response to the rise in numbers and types of legal domestic partnerships, which has impacted some financial issues faced by LGBTQ+ couples. One of these workshops was on estate planning with Ron Hodge, a financial planner and branch manager with The Valley Group in Terre Haute. More events like this are on the horizon. “People need to plan for the future and learn how to make sure their livelihoods are secure,” Cummings says.

PRIDE also offers recurring programming for a variety of groups in the LGBTQ+ community. One of these programs is Prism Youth Community, a PRIDE program for LGBTQ+ youth and allies ages 12 to 20. Members of Pride meet for group discussions, games, films, social events (like a Winter Rainbow Ball), and field trips to places such as Kings Island.

Prism has also dispatched ambassadors to educate others about LGBTQ+ issues. Cummings says, “They travel around the area helping people do workshops … and making sure people know how to engage with and support LGBTQ youth.” There will be more films than ever, with nine blocks of screenings. | Courtesy photo

“What’s remarkable about Prism is their competency,” Hayes adds. They are an incredibly energetic and enthusiastic group who are constantly challenging themselves to learn more and educate others.” For example, one presentation in spring 2017 featured Prism participants discussing queer representation in all kinds of media to an audience including parents, guardians, and friends. Members of the group also participated last year in the Time to Thrive Conference in Washington, D.C., and the Philadelphia Trans Health Conference.

At the other end of the age spectrum, the LGBT Aging & Caring Network, which became a program of PRIDE in 2016, provides social activities, biweekly breakfasts, and book discussions. “Our elders have faced more discrimination than any of us,” Cummings says, referring to the shift in safety and security, both legally and socially, that has occurred over the last few decades. “We want to make sure they’re being supported.”

Trans and Allies Support Community (TASC) has been a program of PRIDE since June 2017. This peer-facilitated group meets once a week to support and affirm transgender, nonbinary, and other gender-diverse people.

The lineup for the 2018 PRIDE Film Festival at the Buskirk-Chumley Theater, January 25 through 27, reflects PRIDE’s shift toward making marginalized minorities feel more welcome and supported. There will be more films from and about LGBTQ+ people of color — including Tailor, an animated short from Brazil; Momo, a drama from South Korea; and The Jump Off, a comedy from the U.S. Other dramas will include The Wound, about a gay South African teen, and Signature Move, about a Pakistani Muslim lesbian in Chicago. Films with transgender characters will include a documentary called Transitioning: Transgender Kids and a short film called TransMute.

This year’s festival will have two talkbacks with filmmakers and nine blocks of film screenings, including one featuring IU student films and one geared toward a youth audience. “The diversity of the lineup is really great. More people who come will see stories that look like their own,” Cummings says. “It’s difficult when you go places and don’t see anyone who looks like you or has similar experiences.”