Porter West — a small property about 20 minutes west of downtown Bloomington, owned and managed by Sycamore Land Trust (SLT) — is an area where the natural beauty of Indiana is on full display throughout the seasons. In the spring, wildflowers bloom in abundance along its trails. During the summer, its thick canopy provides visitors with shade from the heat. Come fall, it bursts with vibrant hues of orange, yellow, and red. Even the rich tans, browns, and grays of winter create a rich tapestry. It is, by any measure, one of Monroe County’s hidden treasures.

Before the David T. Porter trust donated the land to SLT in 2008, the property served as a composting site for dozens of years. Old processing structures made of concrete still stand throughout the preserve, offering reminders of its former life. There’s also a cemetery, where almost all of the handful of inhabitants were laid to rest decades before the 1900s. 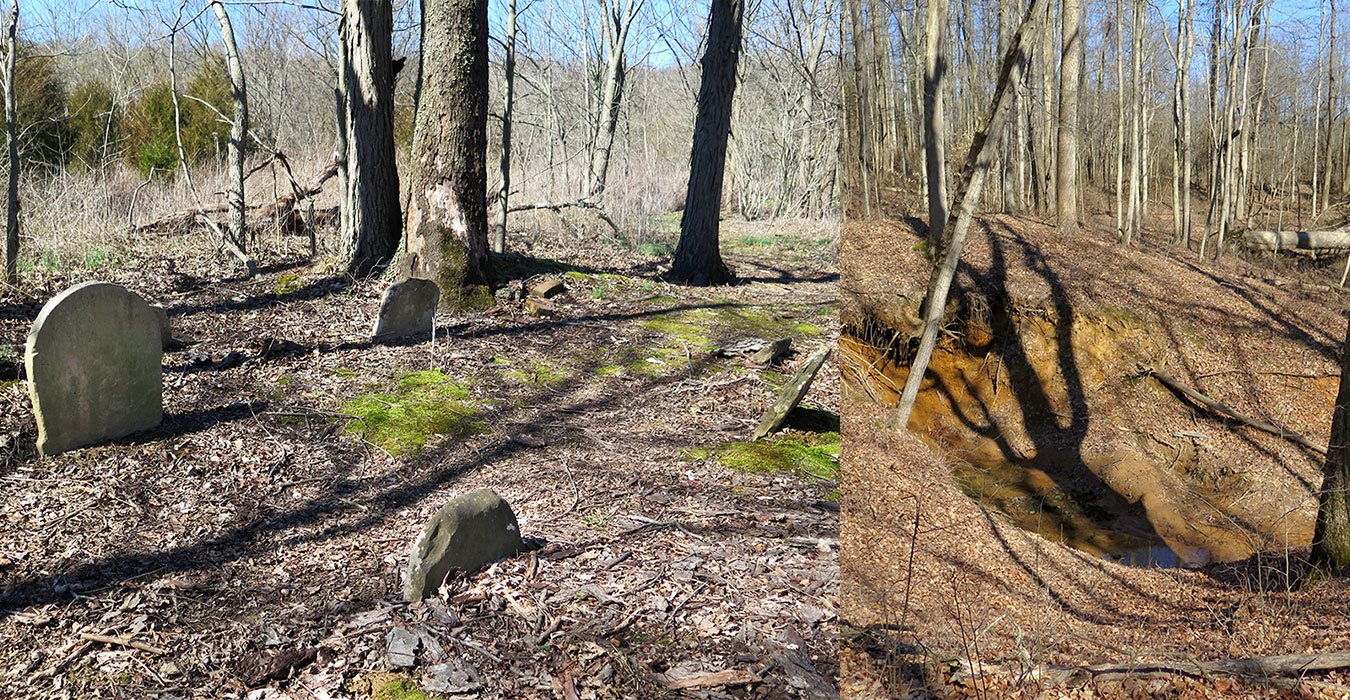 Porter West is home to a pre-1900 cemetery and plenty of sinkholes. The inscription on the large tombstone (left) is for Jean Zinck, who died in 1820, “Aged 60,” and the larger one on the right for “Elesabeth Zink,” born 1776, died 1818. Inscriptions on the smaller tombstone could not be read. | Limestone Post

Now called Porter West, it illustrates how some people can see a parcel of land as undesirable while others see potential. Even though the place is covered with sinkholes, compost piles, and a spooky cemetery, the people at SLT saw a diamond in the rough. But it takes work to get a newly acquired SLT property prepared for people to enjoy and to keep it that way.

SLT Communications Director Abby Henkel says the most difficult issues aren’t always the most obvious ones. One of the biggest problems the land trust faces with its properties is the constant threat of invasive species. When a nonnative species infiltrates a property, getting it out is not an easy task. Herbicide is not always a valid option, primarily because it could impact native flora close to where it is sprayed. So it takes a dedicated team of volunteers to go in and hack down any invasive plants that have grown. Some species need to be uprooted.

Because removal is so difficult, the presence of invasive species is also a consideration when the land trust is deciding to acquire new land, although an infestation isn’t necessarily a deal-breaker.

“If the land is totally covered in an invasive species, it’ll be a lot more work to get it to where it needs to be,” says Henkel. “We want to grow our acreage, but we want to be strategic about it.… We try to be really thoughtful about what we’ll accept.” 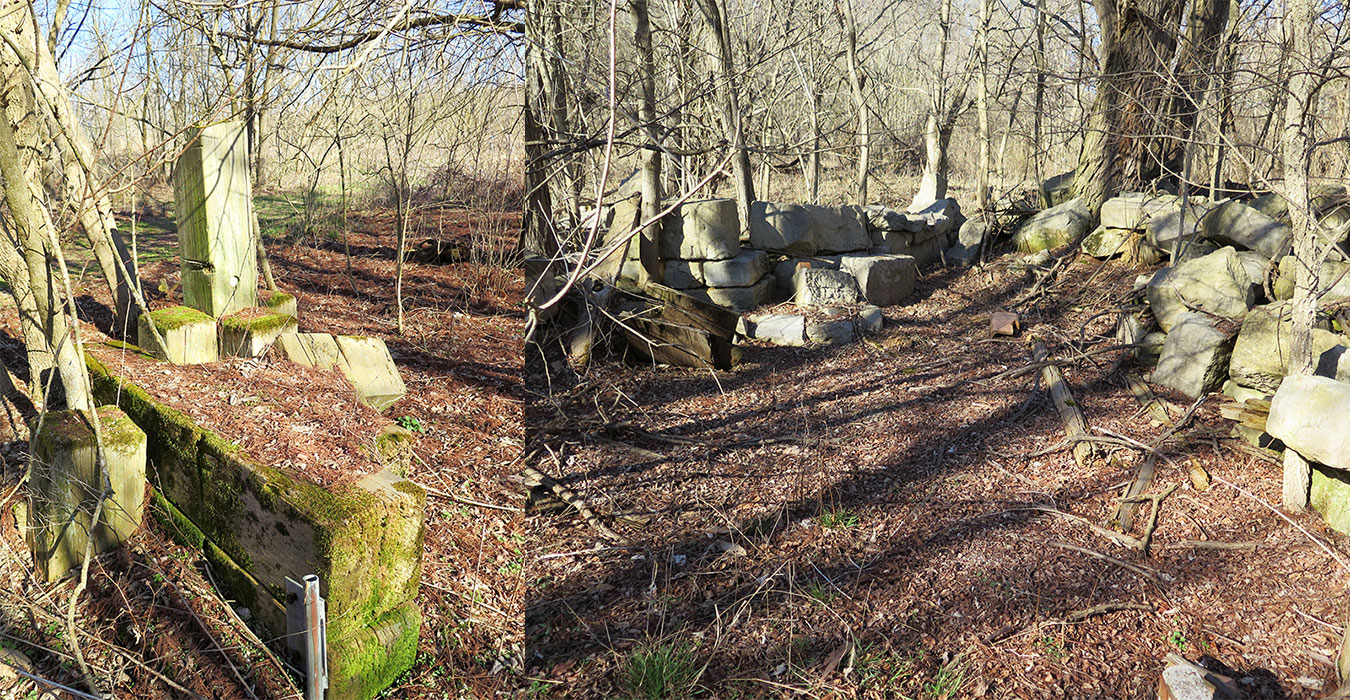 Manmade structures on STL properties, like these at Porter West, are usually left alone to decay naturally. | Limestone Post

Another issue SLT has to tackle when considering new land is balancing public accessibility with preserving native flora and fauna. Any time people are allowed onto a property or a new structure is built, it has an impact on wildlife. According to Henkel, a number of issues can be avoided if people follow a few rules when they visit an SLT property.

For starters, trails through places like Porter West are laid out to have minimal impact on wildlife and the land itself while still allowing visitors to see the natural beauty of the site. So it’s important for visitors to stay on the trail. They should also pack out anything they take in, even stuff people wouldn’t normally consider. Dog feces, for example, which carries bacteria, viruses, and other microbes that can harm wildlife. Henkel says this often gets left behind. Hikers should scrape their boots before and after entering the site. Seeds of invasive plants can hide in the mud stuck to shoes and then spread while hiking. They should also not remove anything they find at a site, such as animal bones and fossils.

When dealing with human-built structures, SLT takes a more hands-off approach. Typically, Henkel says, they prefer to let nature take its course on most of the manmade structures. For example, the compost-processing sites at Porter West (a hold-over from the property’s previous owner) will be allowed to decay and crumble naturally. These structures are moved or demolished only if they are having a harmful effect on the surrounding ecosystem. 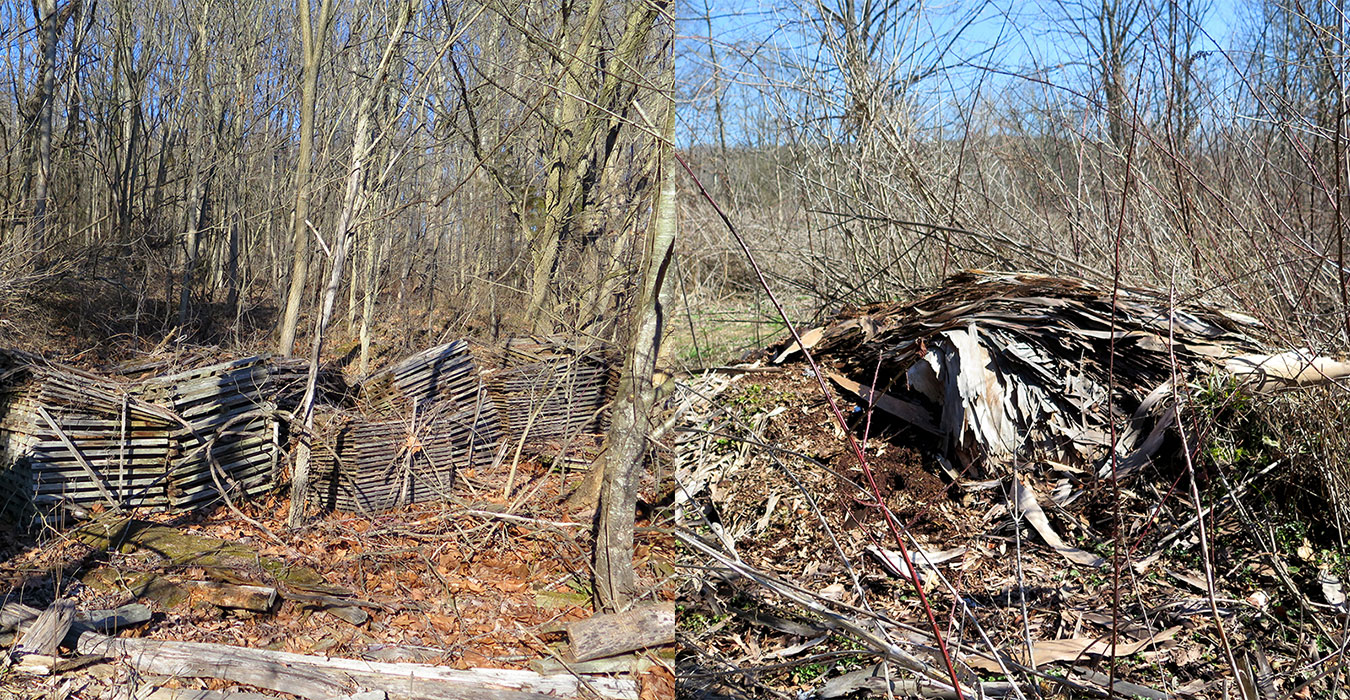 Porter West was once used as a composting site, with remnants still on the property. | Limestone Post

Henkel says the land trust rarely performs upkeep on a structure, and, for the most part, “We wouldn’t take [the property] if the owner said something like ‘I want you to keep this structure in pristine condition.’” SLT’s main concern is the care and upkeep of the environmental aspects of their properties.

Sycamore relies heavily on volunteers, who help with a wide array of duties. The land trust works extensively with the Hoosier Hikers Council, an advocacy group that helps build hiking trails around the state, such as through Porter West.

Members of Sycamore Land Trust often volunteer for trail-building and other preservation projects, but SLT welcomes nonmember volunteers, too.

Jonah Chester is a senior at Indiana University, majoring in journalism and criminal justice. He has been a Hoosier his whole life, having been born and raised in Trafalgar and then moving to Bloomington for school. He has formerly written for the Indiana Daily Student. His favorite stories to work on are pieces about crime in Indiana, including everything from drug trafficking to the prison system. When not writing true tales of crime and intrigue, he can be found trying out new and unusual cooking recipes on his friends and family.
Tagged
Comments