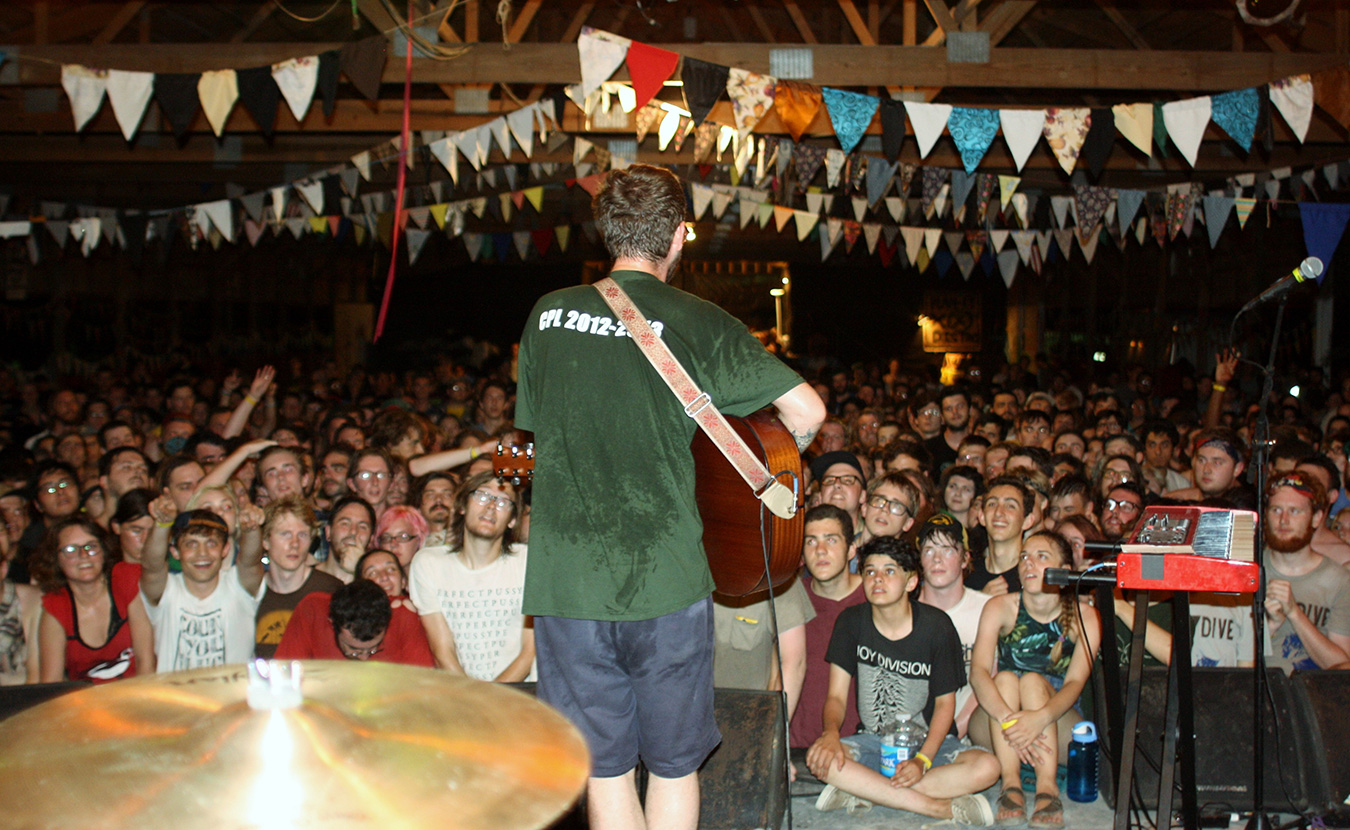 Plan-It-X Fest, a weekend of folk-punk running July 22 to 24 at Stable Studios, brings people to southern Indiana for the opportunity to see both friends and favorite bands perform. | Photo by Garrett Walters

Music by day, camping by night, Plan-It-X Fest has been an on-and-off gathering ground for punks from around the world since 2004. The weekend of folk-punk, which will run July 22 to 24 at Stable Studios in Spencer, brings people to southern Indiana to see both friends and scores of bands perform.

Chris Clavin, the co-founder of Plan-It-X Records and an organizer of the festival, says that just because you’ve been to other music festivals doesn’t mean you’ll be a master of Plan-It-X Fest. There are key differences to the festival compared to major music festivals, including the small size of roughly 1,500 attendees, the single-stage system, the lack of official headliners, the anti-capitalistic attitudes, and more.

Perhaps the biggest difference is Plan-It-X’s charity aspect. The touring bands are paid modestly, which allows the remainder of proceeds to go toward Midwest Pages to Prisoners Project, All Options Pregnancy Resource Center, and The Void.

Even with the good intentions, surviving this high-energy weekend is no walk in the woods. Thankfully, Clavin and some other festival organizers have come up with enough tips and tricks to make sure you — and your inner anarchist — get the most out of Plan-It-X Fest.

First of all, you need to get to Stable Studios. Despite the misconception that the fest is located in Bloomington (which it was in past years), it is about 20 miles away in Spencer.

“If you’re taking the Greyhound to Bloomington, or you’re flying to Indianapolis, do some research and figure out how to get to the countryside of Indiana,” Clavin says.

So unless you’re planning to make the six-hour walk from Bloomington, you should either carpool — which festival organizers strongly recommend due to limited parking — or take the Rural Transit bus system, which has information available on their website. Stable Studio’s grounds span 55 acres, including a small pond near the stage. | Photo by Garrett Walters

Maybe the festival’s only similarity to Tennessee’s Bonnaroo festival is the camping aspect. Many of the 55 acres are available for camping, so attendees are encouraged to bring their tents, flashlights, bug spray, and toilet paper.

“This is camping, so be prepared to camp, if you’re planning on camping,” says Alison Garrett, a festival organizer.

Although there will be local vendors (offering strictly nonmeat meals), such as Naughty Dog, a new 20,000 gallon well of water, and plenty of Porta Potties, festival organizers suggest bringing your own supplies.

Stable Studios will be divided into three sections: the field, the sober camp, and the forest. Each area comes with its own rules, which Clavin says helps everybody have whatever type of weekend they want to remember — or not remember.

Because there is only one stage, each band or musician is allotted a 20-minute set, whether they’re top or bottom billing. This makes it possible to see all 63 acts over the three-day festival.

However, there are certain groups the organizers consider don’t-miss sets. Ramshackle Glory, a well-known, highly influential folk-punk group from Tucson, Arizona, is playing their final show ever late Sunday evening. Clavin says he is anticipating it will be an emotional set full of celebration, dancing, and maybe a few tears.

Emily Buckwheat, a festival organizer and member of Bloomington folk-punk group Ghost Mice, says there are several touring and local bands she is looking forward to seeing. Although she recommends seeing every band, she gives notable mention to North Carolina’s Cottontail, Florida’s Nostradogmus, Georgia’s Femignome, and local groups Sir Deja Doog and the Caskettes and The Minor Kind.

4. Check out some of the nonmusic events

The music festival — as the name suggests — revolves around the music. However, Garrett has helped organize a wide range of nonmusic workshops, activities, and parties during the breaks between sets and at the end of each night.

Some of the workshops throughout the weekend include morning yoga, nonfiction writing exercises, discussions for survivors of sexual abuse, letterpress printing, and a National Moth Week presentation. 5. Just be a nice person

When it comes down to having the best punk-infused, anarchistic time of your life, it’s important to be considerate of others. Often, this means making sure you aren’t that annoying festival person. Kara Comegys, an event organizer, says that just because you’re at a punk festival, doesn’t mean you have to be a jerk.

“Think about how you’re affecting the people around you,” she says. “Even if you’re watching your favorite band, maybe people don’t want you to crowd surf.”

And if you find yourself lost at any point this weekend, there will be plenty of volunteers wearing orange bandanas who can lead you in the right direction. These volunteers, many of whom are part of the Bloomington punk scene, will be working hard all weekend to make sure the festival goes as smoothly as possible, with just a hint of chaos.

Editor’s note: This year’s event will run the weekend of July 22 to 24 at Stable Studios in Spencer, with a post-fest show and hangout at The Void in Bloomington on Monday July 25. (Click here for details and ticket information.)