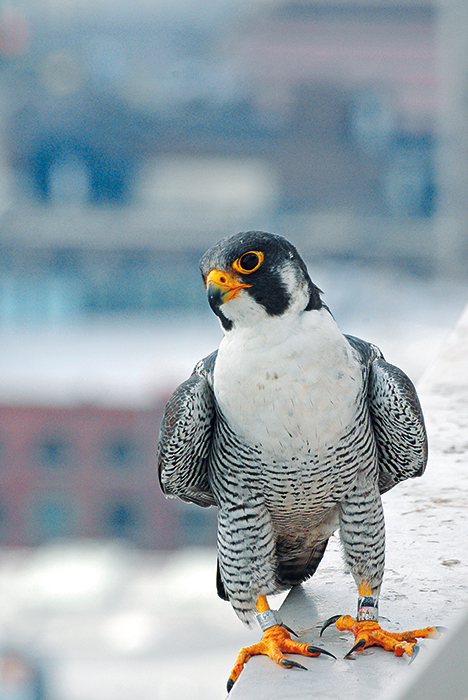 Peregrine falcons in America have soared back from the brink of extinction since the 1960s, even in Indiana. Just as humans caused their decline, “it was also dedicated humans who brought these birds back,” writes Jared Posey. This “standout conservation success story” is unusual because peregrines “may be benefiting from an increasingly urban landscape.” Kinney, pictured here, made his home in downtown Indianapolis, before dying in 2012. Indiana Department of Natural Resources said, “Kinney died after striking Market Tower, where he had nested with [his mate] KathyQ for 10 years. At 19 years old, Kinney was believed to be the oldest and most productive peregrine in the Midwest, having fathered a combined 61 young with KathyQ and a previous female.” | Photo courtesy of Indiana Department of Natural Resources

The peregrine falcon doesn’t know the word “ordinary.” That’s in part because of the whole “English language” thing — but also because they are the world’s most widespread raptor, the fastest animal on earth, and predator to a fifth of the world’s bird species (hunting them right out of the air), and they were even trained during World War II to take out Nazi carrier pigeons.

Since its near extinction from North America in the mid-1900s, in recent years the species has, forgive me, soared in population, largely due to reintroduction programs like those that have occurred here in Indiana.

According to the Indiana Department of Natural Resources (DNR), by the 1960s peregrine falcons had disappeared from the entire eastern United States, and their numbers out West had plummeted by a startling 90 percent. The culprit: DDT, an effective but persistent insecticide that traveled up the food chain and bioaccumulated in top predators such as peregrines. This led to thinning of the birds’ eggshells and the inability to reproduce, which caused a near collapse of the North American population.

Peregrine falcons may have human causes to blame for their drastic decline across the continent, but in one of the more standout conservation success stories of recent years, it was also dedicated humans who brought these birds back. In 1962, biologist Rachel Carson wrote Silent Spring, a book that gripped the nation and blew the whistle on the danger of DDT and other manmade toxins. The book even landed on the desk of President John F. Kennedy, who in the last year of his life fought hard to protect Carson’s research from the backlash of the chemical industry. In 1972, DDT was banned in the United States. It didn’t take long for falconers, ornithologists, and birders across the Midwest and eastern states to team up to breed, release, and monitor these endangered birds.

One type of location that proved remarkably successful for peregrine falcon reintroductions was the high-rise structures in cities, meaning peregrine falcons are in the minority of species that may actually be benefiting from an increasingly urban landscape. In fact, the Midwest Peregrine Society — one of the alliances responsible for peregrine falcon reintroduction — reports that the tall structures in cities have allowed the peregrine population in the Midwest to exceed four times the population of its pre-DDT levels. It was the Midwest Peregrine Society that seeded the idea for an Indiana-based reintroduction effort that began in the early 1990s under the management of Indiana’s DNR.

As I mentioned earlier, peregrine falcons are the fastest animal on the planet, having been clocked at a whopping 242 miles per hour. These speeds occur during hunting, when a peregrine soars high above its prey then plummets at breakneck speeds and balls up one talon like a fist to give an unforgiving deathblow to its target. Peregrines are well adapted to handle such extreme flight, with special adaptations such as nostril cones that disrupt the airflow at high speeds, and third eyelids that help keep their eyes clear of debris. When not relying on sheer speed, they can also catch prey in their talons and sever the spinal column with a notched beak that’s perfect for the job. 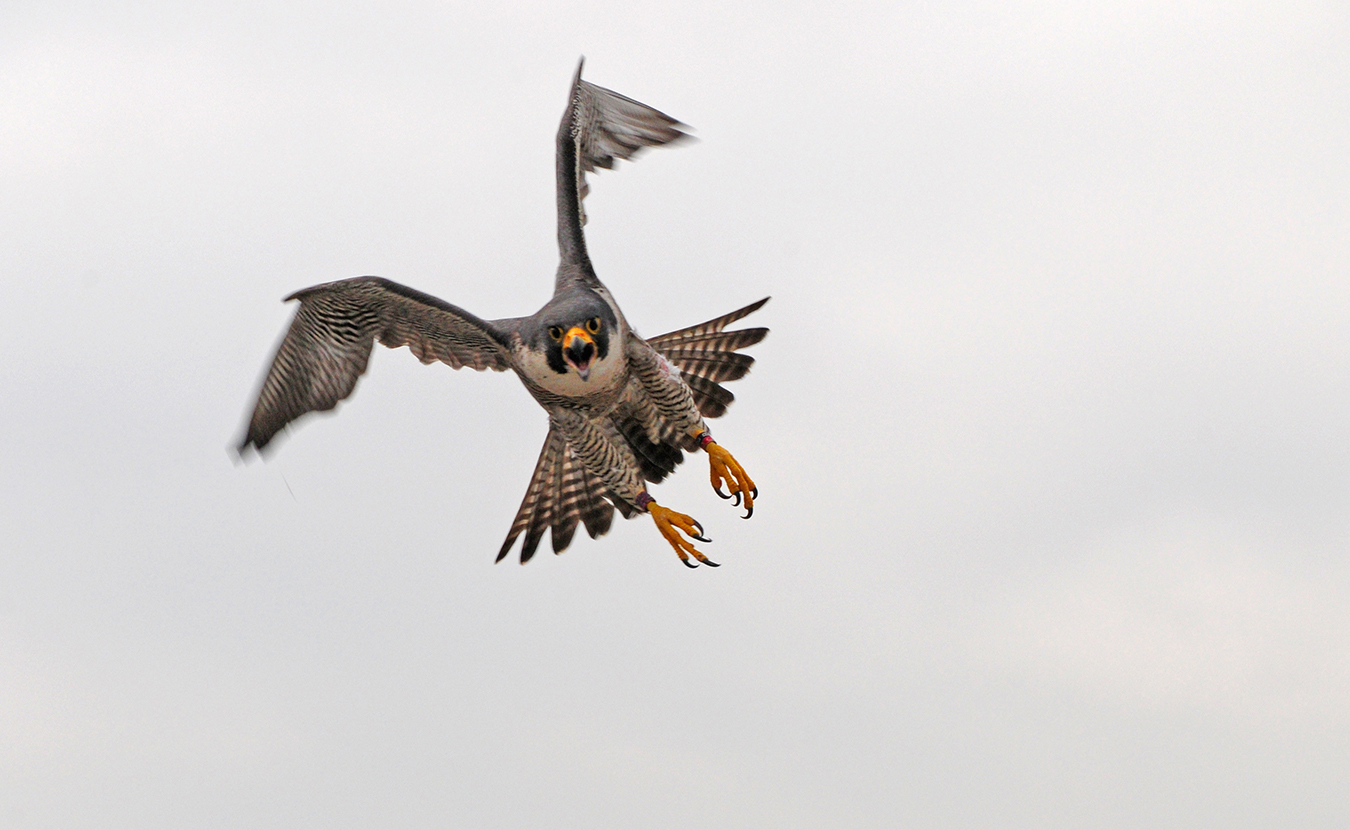 KathyQ was Kinney’s long-term mate and died in 2017 at 19 years old. After Kinney’s death in 2012, KathyQ partnered and had more chicks with a 2-year-old falcon named Will from Grand Rapids, Michigan, who moved into Kathy Q’s Market Tower nest. Reacting to KathyQ’s death, IndyStar blogger James-Reim said, “But what a glorious falcon life. I know I have said that probably a thousand times, but think about it — she lived to be almost 19 years old and hatched so many falcon babies and raised them to be the wonderful birds of prey that falcons are. She contributed to the peregrine falcon recovery and set the stage for the new girl in town to find her new home and start her family line. Just quite remarkable.” | Photo courtesy of Indiana Department of Natural Resources

These are up-close details of their anatomy that you or I may never see in person. But for Allisyn Gillet, it’s just another day at the office. As a nongame bird biologist with the DNR, she heads Indiana’s project to research and protect these amazing birds — and even gets to know them by name. She estimates around 20 pairs of peregrine falcons make their home annually here in Indiana. Known locations include Indianapolis, East Chicago, Fort Wayne, Gary, Michigan City, South Bend, Terre Haute, Wheatfield, and Hardy Lake, down by Scottsburg. In an interesting environmental dynamic, Gillet says that many of these nesting pairs currently rely on the tall smokestacks of coal power plants for their nest boxes. However, many power plants are converting to natural gas for economic reasons and are removing their coal stacks. This means new nesting sites need to be found, such as other tall buildings and high bridges. 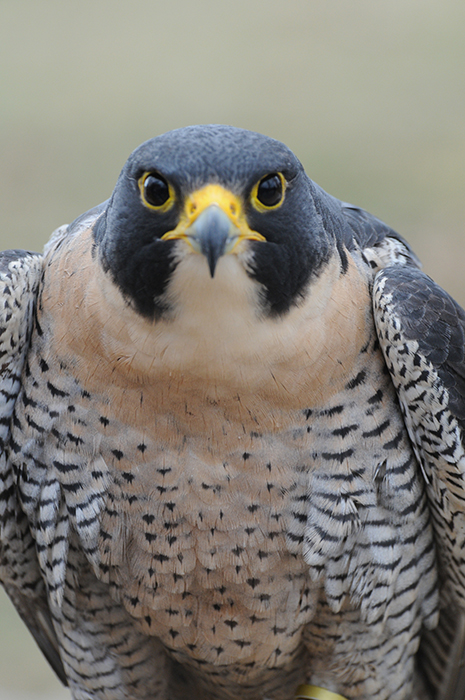 While peregrine falcons do very well in urban settings, some still live in nature, such as this one at Hardy Lake, near Scottsburg in southern Indiana. | Photo courtesy of Indiana Department of Natural Resources

Gillet says that the reason these manmade structures have been more successful in some places than in natural cliffs is because great horned owls, a prolific predator of falcon chicks, are largely absent from the urban ecosystem. Cities create an ideal habitat for peregrines: the absence of owls and an abundance of prey.

Our cities may be largely starved for wildlife, but two species easy to find are common rock pigeons and European starlings, both introduced to North America from Europe. The pigeon was brought over hundreds of years ago by European settlers as a food source, while the starling was brought over for … other reasons. Eugene Schieffelin, a Shakespeare enthusiast, released 60 starlings into Central Park in 1890, as part of his, let’s say, unique master plan to bring to America every bird species mentioned in Shakespeare’s plays. Nowadays, there are an estimated 200 million nonnative starlings in North America. The explosion of pigeon and starling populations can be a serious problem for native bird species, agriculture, and corrosion of city structures. However, it also means plenty of falcon food.

While peregrines eat a vast array of prey, pigeons and starlings are mainstays in their diet. Gillet says this is good for the ecosystem, because, as top native predators, they regulate those prey populations and can keep numbers in check. Perhaps peregrines are saving our cities from having pigeon and starling problems as dramatic as those in European cities. The only constraint right now on their population in Indiana is the availability of nesting sites. With the existing surplus of prey, their populations could continue to grow with more nesting boxes.

Why else do we need peregrine falcons in our cities? Because they’re in our cities. That’s not where we’re used to seeing dramatic wildlife, but every day over downtown Indianapolis (which is probably the most likely place in Indiana to spot an elusive peregrine), is a National Geographic special waiting to happen.

Gillet believes we are currently at a temporary carrying capacity for peregrines, but only because there aren’t any more nesting boxes. Every once in a while, an old pair in the set of 20 pairs dies and a new pair takes their place, but for the most part, we see the same pairs in the same nesting sites from year to year. 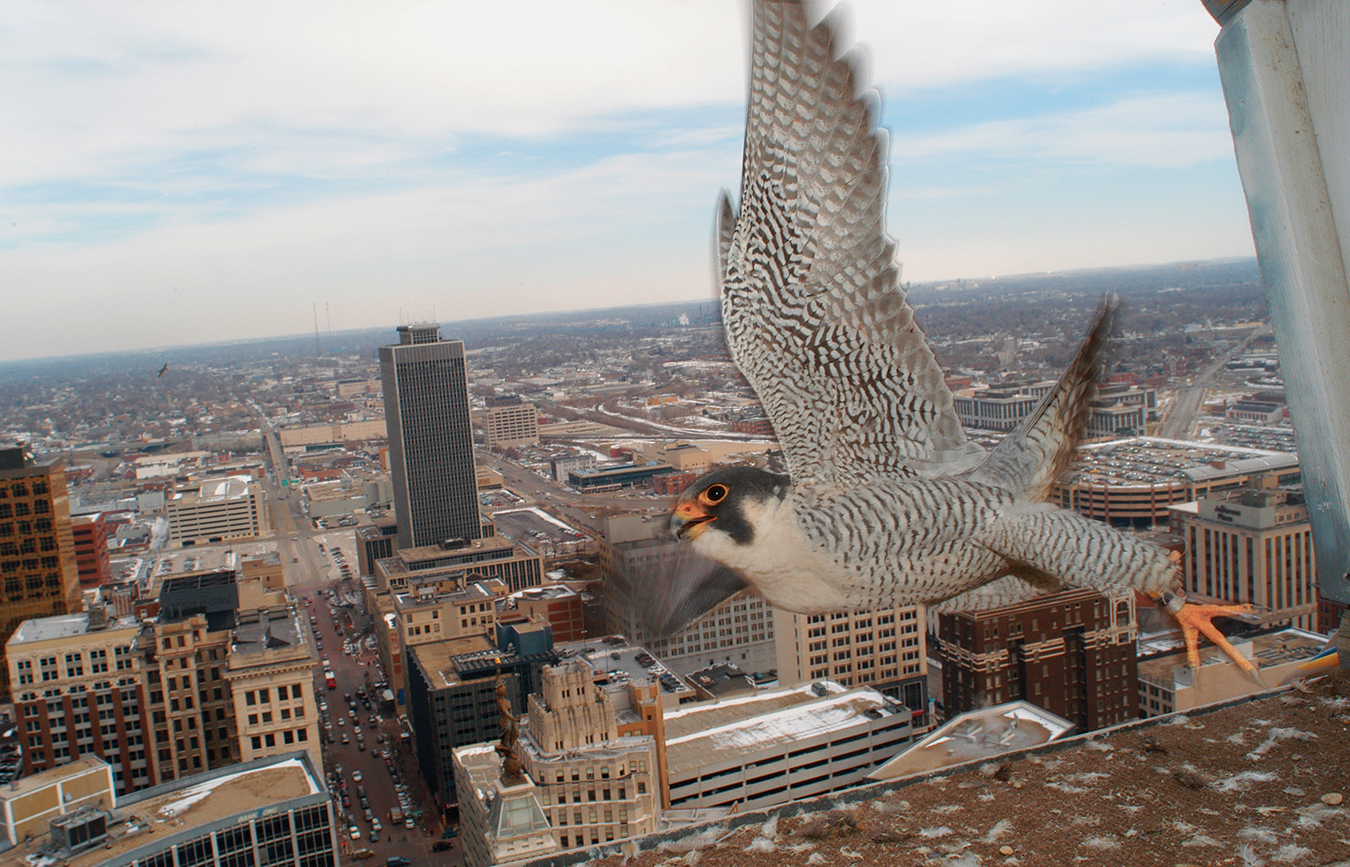 Kinney, who was Indiana’s oldest peregrine when he died in 2012, flies from his nest box at Market Tower in Indianapolis. His mate, KathyQ, and her new partner Will continued to live in the nest box — even wintering there. Since then, according to James-Reim last April, the box is occupied by Sesenta, who was born in the box and son of Kinney and KathyQ. His partner “is unbanded and most likely the same female who defeated KathyQ last year for control of the site.” | Photo courtesy of Indiana Department of Natural Resources

The population is not ever-increasing, but there is no reason their population couldn’t continue to grow and even possibly move into Bloomington with the help of some interested citizens, funding, and approval from the DNR — as has happened in other Indiana cities. Bloomington has already been involved with the growing trend of intentionally creating and maintaining urban habitats for wildlife, such as what was done for the chimney swifts outside of WonderLab and Fairview School. And, hey, maybe peregrines could even help our crow problem!

For an innocent child looking up to the skies, or an adult who desperately needs a reminder of the natural world, the stunning peregrine falcon is making its home right next to ours. It may be that the success of these falcons can remind us of all on this planet that’s worthy of saving. After a study in 2017 stressing that we may be heading to the biggest extinction event since the one that wiped out the dinosaurs, we don’t just need conservation — we need conservation successes. Gillet considers peregrine falcons to be a flagship species. Since they are so charismatic, peregrines can stir interest in people who can then advocate for other species as well. And now that we’ve saved peregrine falcons in North America, can we continue to protect them? And can we save the many other species still reeling from our past harm and neglect?

If you want to contribute to the Indiana Department of Resources peregrine project, donations can be made to the Indiana Nongame Wildlife Fund. For every $5 donated, $9 is matched with federal funds.

Peregrines can be somewhat reliably seen perching on the statues of Monument Circle, or nearby around their nest box at Market Tower. Look to the left of the key on the KeyBank logo on the Market Tower building. For a better angle (though farther away), try viewing from the parking deck across the street. The best time of year is late May to June when they’re most active around the nest.

You can also check out this webcam, or this blog.

Jared Posey was born and raised in Elwood, Indiana, and graduated from Purdue University. He’s interested in mindfulness, the food movement, conscious parenting, and connecting kids to nature. Jared created and ran an alumni interview series between Elwood High School and the Elwood Call-Leader. He has written for TAKE ROOT magazine and self-published a book called Will Work for Food: A Book of Inspiration, Poems, and Edible Action.
Tagged
Comments