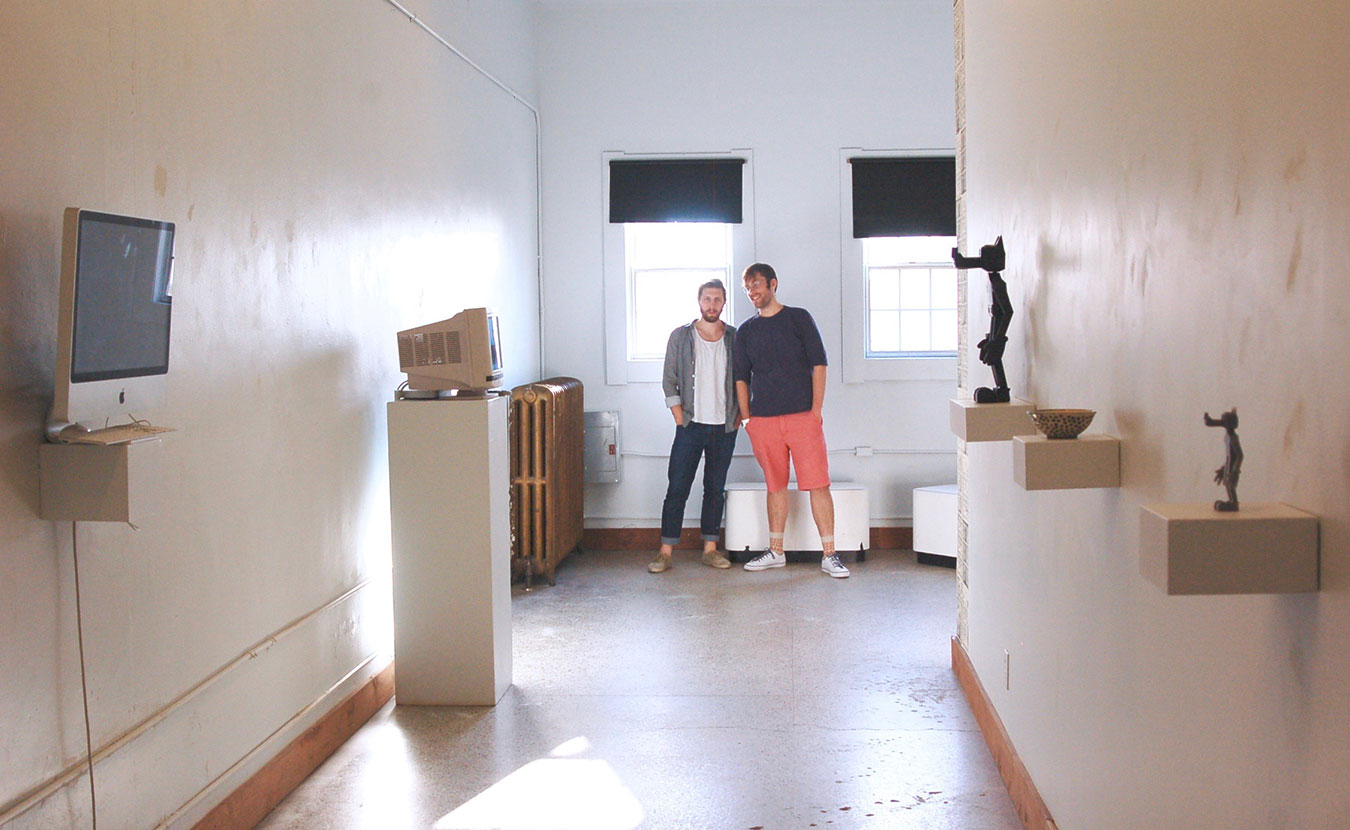 Bloomington has long been a hub of creative activity. As home to institutions such as Pictura Gallery, the John Waldron Arts Center, and the Indiana University Grunwald Gallery, the community offers numerous spaces for professionals and students to show visual art — and now there are even more.

A new scene is emerging within the community, as young creatives forge their own spaces to serve as hip alternatives to the institutions. While Bloomington has already seen its gallery offerings expand in the past decade, with venues like Blueline Media and the I Fell building providing exhibition opportunities, some additional spaces are helping to reach an even broader swath of potential artists and supporters. Housed in more casual or unlikely locations, these alternative sites are subtly revising the term “gallery” and rethinking what counts as an art destination.

Sean Starowitz, Bloomington’s assistant director for the arts, welcomes the new additions to the local art scene. Where a formal gallery, according to Starowitz, implies a financial relationship — it exists mainly to sell art — new “alternative spaces” nourish the local ecosystem and enhance the artistic community that makes Bloomington unique.

“While there is a variety of different art experiences here in town,” Starowitz says, “I do feel that there is room for some growth.” Bass, left, and Cornford founded NOISE, which has two gallery spaces — one on the square and one in a converted garage on the Near West Side. | Photo by Samuel Welsch Sveen

One sign of new growth is NOISE, an art gallery (as well as a residency and, soon, a publication series) founded by Indiana University MFA graduates William Bass and Raphael Cornford. NOISE is technically located in two separate sites: a garage-turned-gallery on the Near West Side that opened in the summer of 2016, and a second-floor space that opened this past May above the former NOCO restaurant on the downtown Square. Both NOISE spaces show contemporary works that recontextualize rote ideas while also demonstrating playful aesthetics and sharp humor. A recent exhibition at NOISE downtown, for example, featured an animated video by Jeron Braxton. The video portrays a digital universe where representations of youth, race, fantasy, and technology combine to offer poignant commentary on the status of humanity in an increasingly mediated world.

The NOISE garage gallery, which hosts shows in tandem with the downtown location, might strike some as even edgier due to its unlikely atmosphere. In a freestanding garage repurposed by Bass and Cornford, attendees observe and discuss contemporary works — prints, drawings, projections, and more. While the casual atmosphere and obscure location might deter folks used to the catered and well-marked galleries downtown, the NOISE garage is comfortable and inviting to a younger Bloomington audience who see themselves as a new art generation in need of new, more intimate spaces in which to display and connect.

On the IU campus, a similar impulse has taken hold, as students seek additional spaces to engage with art in an accessible way. Like Bass and Cornford of NOISE, the graduate student coordinators of The Fuller Projects seek out experimental work by IU students and faculty, Bloomington residents, and visiting artists. The space is a double-win for IU art students: They gain curatorial practice and, at the same time, they get to witness styles, mediums, or perspectives that aren’t typically represented at more conventional gallery spaces on campus or downtown. Installed pieces at The Fuller Projects from ‘Practice,’ an exhibition by Jenna Richards and Jacob Hanson. | Photo courtesy of Jacob Hanson

The Fuller Projects isn’t new; shows have been hosted there regularly since 2004. But recent efforts to foster community awareness of the space have increased its prominence on the Bloomington radar. Last year, for example, The Fuller Projects partnered with Bloomington’s College Internship Program to present a show by young adults with learning differences. Each school year, three MFA students work together to run The Fuller Projects. They put out open calls, curate the season of exhibitions, and facilitate the weekly Friday night shows. Next year’s coordinators — ceramicist Anne Beyer, digital artist Rachel de Cuba, and textile artist Jenna Richards — plan to partner with more local organizations and advertise their open calls widely on social media in order to foster stronger ties between students and locals and between emerging artists and seasoned art lovers.

Continuing to expand the pool of artists, Richards hopes, will lead to expanded possibilities for the art. When asked about what types of installations they prefer, Richards states simply, “Anything that people can imagine.”

The Fuller Projects’ location within the McCalla School — the building on the corner of 10th Street and Indiana Avenue mostly devoted to production spaces such as a wood shop, metal shop, and student and faculty studios — makes the art on display feel especially vital. For IU students showing there, the work may have been forged in the very building where it is then displayed for public consumption. That will continue to be true when The Fuller Projects moves to the School of Art + Design next year, as the McCalla School undergoes renovation. Dimensions Gallery has a little bit of everything: art, books, games, and music. | Photo by Samuel Welsch Sveen

Elsewhere in Bloomington, Adam Nahas, also an IU art alum, is providing another alternative place for local and student artists. Dimensions Gallery is Artisan Alley’s new exhibition space located in a lounge area at the rear of MADE, Nahas’s consignment shop and co-working space near 2nd Street and College Avenue. Dimensions focuses largely on local community artists, serving as a flexible site where they can plan innovative shows and explore alternative modes for sharing art. The tucked-away location and casual vibe create a relaxing, collaborative atmosphere for thinking, chatting, reading, and absorbing art both in the permanent collection and in rotating exhibitions. The MADE retail space helps differentiate Dimensions from many traditional galleries, where much of the art would be economically inaccessible to the viewer. At MADE, customers can purchase original works and prints by local artists at an affordable rate, even if they may not be able to swing the larger or more costly pieces on display inside Dimensions.

Altogether, the emergence of these alternative spaces may be seen as a bellwether of an increasingly experimental Bloomington art scene in future years. More than that, it may also be a sign of a growing commitment among young creatives to engage with the local community and invest in artistic network building here. That commitment is crucial to sustaining and revitalizing Bloomington’s creative landscape, according to Starowitz: “To foster an art scene takes time and practice. We need folks sticking around and cultivating that scene.”

With more art spaces popping up and offering new ideas, experiences, and atmospheres, Bloomington locals have even more opportunities to support artists — from here and elsewhere — and to help cultivate the scene they want to see.