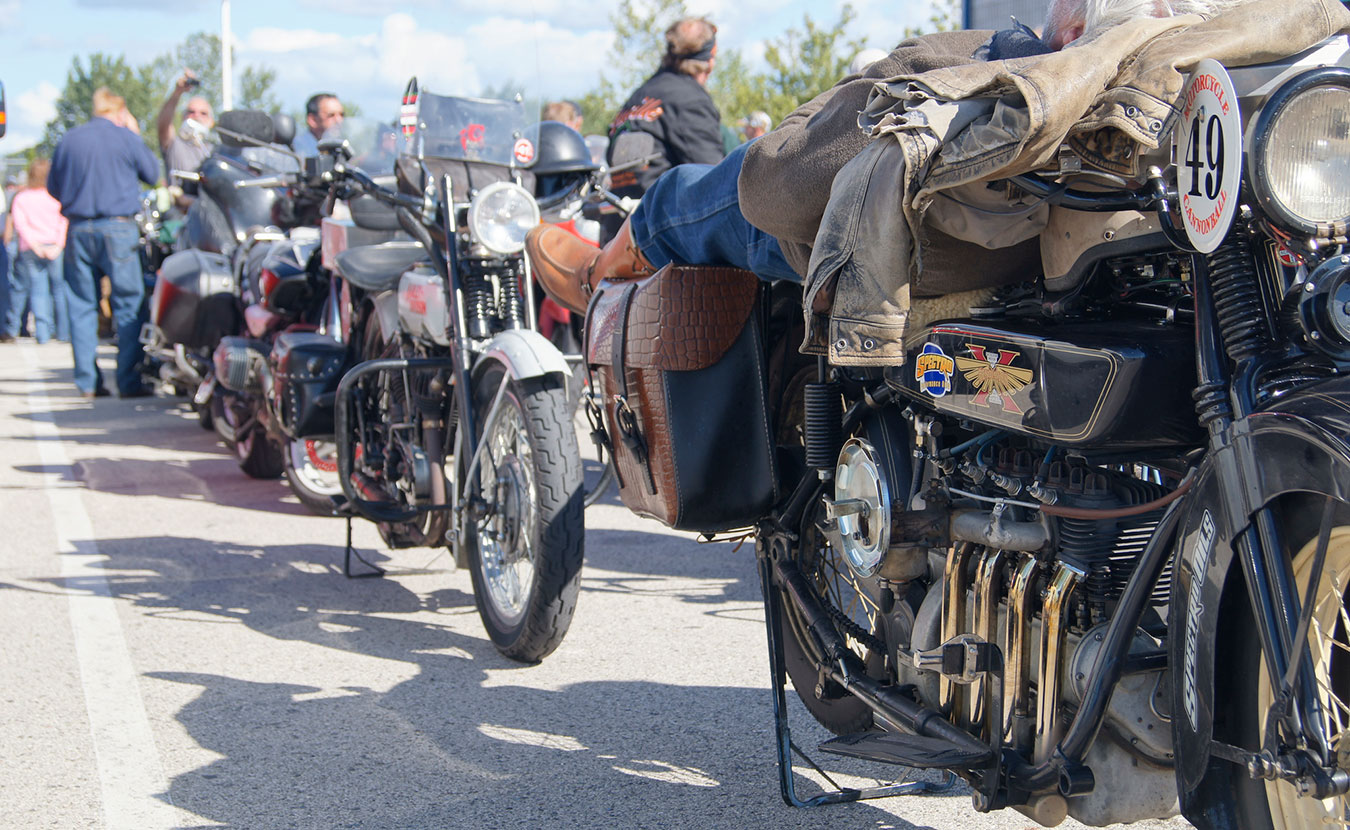 The Motorcycle Cannonball Run, which is named after Hoosier Erwin "Cannon Ball" Baker, will be coming through Bloomington on September 13. Riders will attempt the cross-country trek on century-old motorcycles. | Photo courtesy of Lake Express

May 1914. Erwin George Baker departs San Diego, California, on an Indian motorcycle. He arrives 11 1/2 days later in New York, breaking the record for a transcontinental drive on a motorcycle and gaining the nickname “Cannon Ball” Baker (after the Illinois Central Railroad train Cannonball Express). Now, more than 100 years later, 95 motorcycling enthusiasts from around the world — 25 states, nine countries, and four continents — will line up this month on 100-plus-year-old motorcycles to compete in a transcontinental race of Baker’s namesake: the Motorcycle Cannonball Run. Erwin “Cannon Ball” Baker near the time he broke the record for a transcontinental drive on a motorcycle. | Public Domain

“Cannon Ball” Baker made a huge impact on automotive and motorcycle culture, inspiring many races — like the Motorcycle Cannonball — as well as TV shows and movies (the most famous of which is undoubtedly The Cannonball Run, starring Burt Reynolds). Born in Dearborn County, Indiana, in 1882, Baker won his first motorcycle race in 1904 on a dirt track in Crawfordsville. In 1909, riding his signature Indian motorcycle, Baker won the first race of any kind ever held at the newly built Indianapolis Motor Speedway — two years before the inaugural race of the Indianapolis 500.

With the help of various car and motorcycle sponsorships, Baker made a career of transcontinental driving, competing in 143 cross-country races, totaling more than 550,000 miles. As famed journalist Ernie Pyle wrote, “‘Cannon Ball’ Baker held more auto records than any five other men combined.”

A lifetime of achievements — including an 11th place finish at the 1922 Indianapolis 500 and being named the first NASCAR commissioner in 1947 — has made “Cannon Ball” Baker a household name among auto enthusiasts. This year’s event is being called a “Century Run” because only bikes from 1916 or earlier can compete. | Courtesy image

Founded in 2010 by Lonnie Isam Jr., the Motorcycle Cannonball occurs every other year, each following a different route from east to west. This year’s race — which is dubbed a “Century Race” because only motorcycles manufactured in 1916 or before are allowed to participate — starts on September 10 in Atlantic City, New Jersey, and traverses mostly backroads for 3,300 miles in 17 days to Carlsbad, California. Along the way, they will stop overnight in Bloomington, with Harley-Davidson of Bloomington on West Gourley Pike being an official pit stop. Riders are scheduled to arrive at the dealership between 3:30 and 4 p.m. on Tuesday, September 13.

The roster of participants is limited, though chock-full of big names in the vintage motorcycle community. Bike builders Shinya Kimura and Bill Rodencal will be returning to the race, as will past winner Hans Coertse of South Africa and motorcycle personality “Around-The-World Doug” Wothke. The race even garners some celebrity attention. Patrick Simmons of the Doobie Brothers participated in the 2014 race and is rumored to be racing again this year.

Many women compete in the Motorcycle Cannonball; in fact, women have been traveling cross-country just as long as the boys have. In 1915, the mother-daughter duo Avis and Effie Hotchkiss rode from Brooklyn to San Francisco and back on a Harley-Davidson. Avis rode along in the sidecar as daughter Effie steered.

The 2016 event will be a grueling test of grit and mettle for both rider and machine — the sheer antiquity of these motorcycles poses the biggest challenge. This is one reason the route avoids interstate highways as much as possible: With top speeds averaging around 60 mph, these bikes do not do well on interstates. Plus, it’s just dangerous. Breakdowns will likely occur, and a keen knowledge of the machine and the road ahead will be required by each participant if they hope to cross the finish line with their fellow racers. Replacement parts for these vintage bikes are sparse, and the machines were never intended for long-distance travel. Breakdowns are inevitable as these machines were not built to withstand transcontinental trips. | Courtesy photo

As race founder Isam says, “This route is going to be a challenge, and the bikes from this generation really don’t get ridden that much, so there will still be some rebuilding going on along the run. … It’s going to be a difficult trip. We’ll have long days and tough terrain — I suspect that even the most seasoned rider will find this run challenging.”

Felicia Morgan, the event’s media director, says Bloomington is a “logistical choice” as a stop during the race. “These century-old-and-beyond machines were never built to sustain this kind of battering day after day. The 224 miles from Chillicothe, Ohio, to [Bloomington] are about as many as can be done in a day for both machines from 1916 and older as well as their riders since, really, these machines aren’t built for comfort.”

Despite the lengthy stretch from Chillicothe to Bloomington, the terrain typical of the Midwest is easy-going compared to what they’ll face out west, Morgan says. “The elevations of Wolf Creek Pass in Colorado (11,000 feet), the desert terrain of the Four Corners area and Arizona, as well as the weather concerns such as the high temperatures and probable rain” are “much more troubling” for the Cannonball riders. Race conditions are hard not only on the bikes but also on the riders. | Courtesy photo

Morgan goes on to say that these daunting conditions “will grossly affect the mechanics of these geriatric machines, not to mention their human pilots.”

Many riders work months, even years, to ready their machine for the long journey. The rules state that the bike’s engine must be the original to be eligible for prizes (the winner gets a bronze sculpture created by past Cannonball rider Jeff Decker). Likewise, the original carburetors and magnetos should be used, though there isn’t a hard line on this. The event coordinators promote bike safety, so other modified, updated, or rebuilt parts are required, including functioning brakes and good tires as well as a headlight, taillight, and brake light. The bikes must also have legal licensing and registration.

Each day, the riders are offered lunch or dinner where they can mingle with other participants and talk shop. Also along the route are many motorcycle museums, Harley dealerships, and other landmarks appropriate to the occasion.

Jim Markland, general manager of Harley-Davidson of Bloomington, says, “This is a once-in-a-lifetime opportunity to see nearly 100 motorcycles of 100 years old or older actually functioning as they were intended — not sitting in a museum! The sound and the feel of the machines and the riders in their period riding gear will be an amazing experience.”

Riders stop at a variety of locations along the way, including Harley-Davidson of Bloomington on September 13, where the public can see these century-old bikes in person. | Courtesy photo

According to Morgan, “Harleys, Hendersons, Thors, Excelsiors, BMWs, Triumphs, and other marques” will compete in the Motorcycle Cannonball Run, a true adventure in which “these machines [might] relive their heyday and prove themselves worthy” again.

Spectators are welcome to channel their inner “Cannon Ball” at the Harley-Davidson dealership, as well as see these historic machines, meet their riders, and join in their cry of “California or Bust!”

No Replies to "Motorcycle Cannonball Run to Make Pit Stop in B-town on Sept. 13"