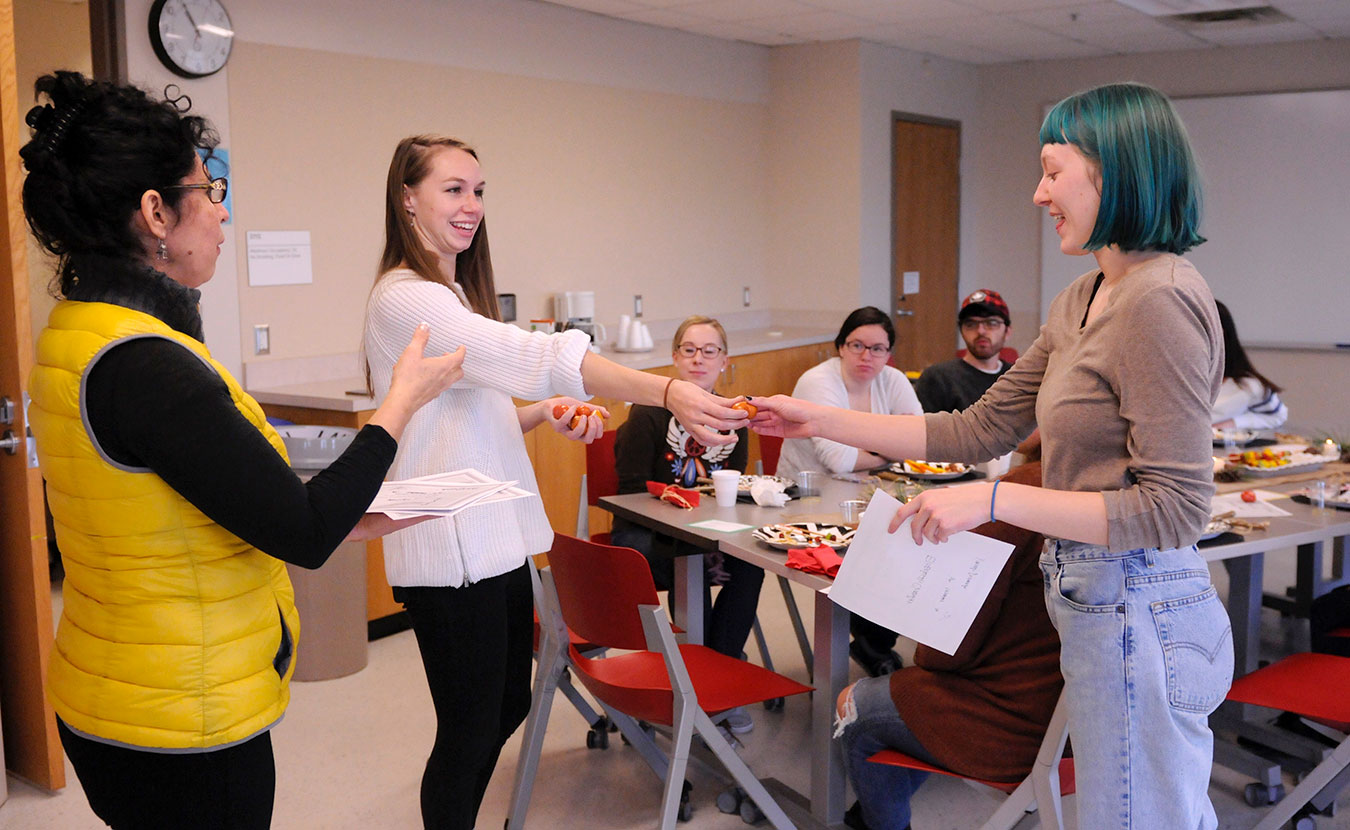 This is a follow up to our original story, “Mentorship Program Tries to Break School-to-Prison Pipeline for Juvenile Girls.”

Theresa Ochoa, an associate professor of special education in the Indiana University School of Education, gathers a group of students for brunch at the School of Ed. They will be feasting on homemade burritos — her own special recipe — as well as sweet treats and skewered grapes, mango, kiwi, and strawberries. The smell of coffee fills the room. The group is gathered in celebration — five of the students present will be awarded a certificate of completion and inducted into the fast-growing group of HOPE mentors. Helping Offenders Prosper in Employment, or HOPE, is Ochoa’s service-based research project that helps incarcerated youth prepare for life after their release.

The number of HOPE mentors increased from three to thirteen in 2016. The program made its debut at the Madison Juvenile Correctional Facility (MJCF) for girls two years ago, and now will be expanding to Pendleton and Logansport correctional facilities as well as Camp Summit Boot Camp. All three are long-term facilities for boys.

The HOPE mentors are undergraduate volunteers from all academic disciplines, who meet individually with youth to explore career options, fill out job applications, write resumes and cover letters, and apply to colleges or vocational programs. The mentors also discuss soft skills, which include developing social graces, communication and interpersonal skills, language use, and personal habits.

Having a job and a connection to the outside community is a positive factor in reducing recidivism — a primary aim of HOPE, which Ochoa began developing four years ago. The program is designed to help juvenile offenders transition back into their community by focusing on employment. “The kids have a greater chance of prosperity when they have a job,” says Ochoa.

While the primary focus of HOPE is one-on-one mentorship, the team also creates opportunities for all youth in the facilities. MJCF and HOPE organized two job fairs last year in the facility’s gym with representatives from various trades and professions as well as state universities and colleges. At the 2016 Re-entry Summit, a state-sponsored weekend focused on criminal justice reform, Ochoa conceived the idea of the Stepping Out Workshop Series. “It will be a series of events based on when they get out and into jobs,” Ochoa says.

The first event will be a fashion show that is scheduled for March, in the vein of an episode of the television series Orange Is the New Black. The HOPE mentors have asked IU sororities and fraternities to donate professional clothing and shoes for the girls to model before a panel of judges. They will be graded on appearance, demeanor, and interview skills for various types of jobs. The girls will get to keep the clothes and shoes for future interviews. While Madison has been the pilot facility for HOPE, all future activities and events are slated for the Pendleton, Logansport, and Camp Summit facilities, with superintendents, administrators, and teachers fully supportive of adding mentors to their programming. “The public may not be able to see how the adults who run the facilities want to do good for the kids,” says Ochoa. “But, HOPE has not had to convince them.” The facilities are eagerly joining forces with Ochoa and her mentors to work toward a common goal.

Sarah Swank was one of the first mentors and has since become Ochoa’s right hand. After graduating from IU in May 2016, Swank stayed in Bloomington to continue her work with HOPE. She took a job in food delivery to make ends meet while continuing to volunteer as mentor and training coordinator for new mentors.

Swank’s dedication paid off when the Indiana Department of Corrections (IDOC) recognized the positive influence HOPE mentors had on the girls at Madison and wanted to participate in extending the program across Indiana. The IDOC hired Swank as Director of Training and Recruitment for HOPE within the Department of Youth Services.

To help with its expansion, HOPE has begun a partnership with IU Kokomo, which now has three mentors trained and ready to visit the Pendleton and Logansport facilities. Also, Swank says, “We have made efforts to partner with Hanover College already, as they are so close to Madison.” They are also planning to reach out to high school principals and teachers throughout the state, she says, “to see if they can recommend students who are about to go to college, who might be good mentors.”

During the induction celebration, Ochoa explains that earning the trust and undivided attention of the juvenile students can be daunting to new mentors. “Juvenile offenders often lack decision-making skills, self-regulating skills, and the ability to anticipate consequences,” she says, and keeping them on task and motivated can be difficult. Haley Clements and Jesse Cooperman have both been mentoring at Madison since HOPE began, and they share success stories to the group as encouragement.

Clements had a former mentee contact her, several months after the youth’s release, to say that she has a job and is engaged.

Cooperman thought he had lost touch with one of his mentees. But she recently contacted him to say that she is living in northern Indiana and is furthering her education. Ochoa assures the mentors, new and old, that their presence alone makes the difference. “You keep showing up,” she says, “and as they build confidence, they are following your leads. So take some of the credit. This isn’t magic, it’s your hard work.”

As the members of the HOPE team settle back into their seats, Ochoa reminds them that they are not only playing an important role in the lives of youth but also taking part in the only mentorship program of its kind in the country.

“Mentoring has been around, as a social service, for several decades, starting in the ’50s,” she says. “The most widely known is the Big Brothers Big Sisters program. There are also programs for incarcerated adults, and they even focus on employment. Many states around the country have programs for incarcerated youth. Aftercare Indiana through Mentoring (AIM) is a strong program that has existed for some time. But only HOPE is embedded in the facilities and follows the juveniles out after release, and only HOPE will exist as a single, same, unified mentoring program in all state-level facilities for juveniles — one program for all juveniles in all our facilities.”