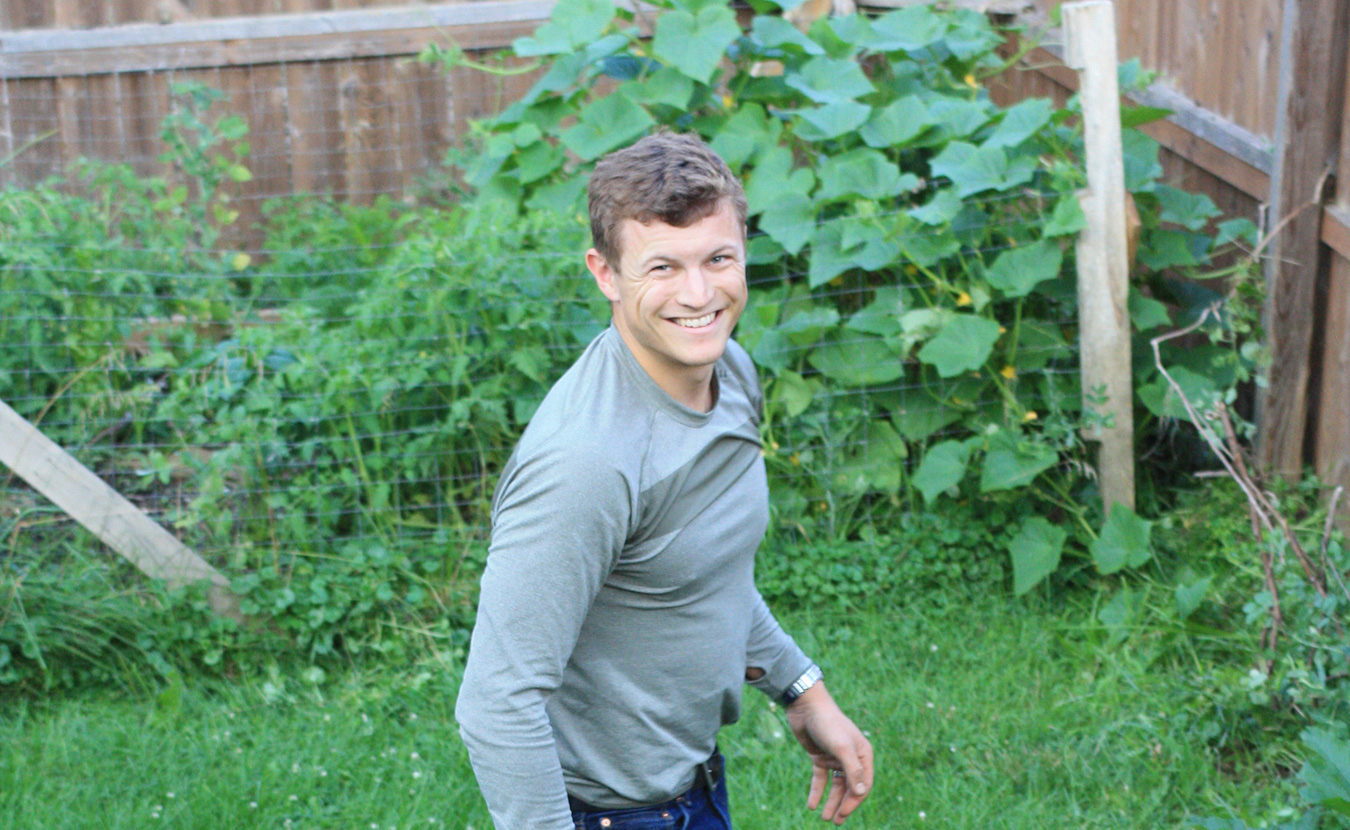 After years of gardening difficulties in Montana, Jonna Mary Yost and her husband, Benjamin Schwarz (pictured here), did not realize what was in store from their Bloomington garden. | Photo by Jonna Mary Yost

With a thumb, I pressed each waterlogged seed into the cold Montana-spring earth. Only to the first knuckle. Then on down the row until all the seeds were gone. Zucchini, tomato, red onion, baby red potato, English cucumber. Each day I turned the nozzle at the end of my hose to “shower” and tossed streams of water onto the dried dirt until it turned a deep moist hue once more. And when September came, bringing the first frost, the dirt became too cold to dig for potatoes, and each of the seeds that had just begun to emerge as tiny leaflets faded and shriveled to wilted beings. Montana gardening season was over. Pea vines twisted around the other vegetables in Jonna’s garden, creating a “tropical rectangle of chaos.” | Photo by Jonna Mary Yost

With a brief growing season and temperatures that peak in the 90s during the dry summer, seeds stand little chance of sprouting, despite avid watering efforts. A friend went so far as to plant his tomatoes in Radio Flyer wagons. Each night he wheeled the tender greens into the house to avoid frost, and each morning he presented them to his porch and sunlight once again. I chose to avert my garden efforts from such drastic measures but reaped little to no reward come fall.

Despite the heavy blanket of defeat, upon my arrival in Bloomington with my husband, Benjamin Schwarz, I purposefully chose a home that would allow for a garden in the backyard. Come May, I dug a plot about two feet deep, then laid down a sheet of weed barrier. With an inquiry at one of the loading docks behind an Indiana University building, I secured a few pallets to make the border of my garden. A quick Craigslist search led me to the rest of my materials. One thin layer of gravel and a deep layer of gardening soil later, I was ready to plant.

The seeds soaked overnight, and in the rays of morning I stepped lightly on the freshly leveled dirt, pressing seeds down to their new home until the packets of squash, peas, carrots, and numerous other veggies were empty. A few extra herb seeds, such as cilantro and basil, went into pots on the porch. With a spritz of water on top, I left the garden for the day, and then the month, as my schedule filled and I forgot about my crop.

I soon discovered the power of the Indiana humidity and sunlight. A jungle awaited me in the form of a raised, ten-by-eight-foot garden plot. Last season’s “probably not any good” corn seeds from a neighbor were suddenly taller than my eight-foot fence. Pea vines twisted and clung to squash flowers that towered over carrot stems, feathering in the breeze at four feet tall. The cutesy DIY popsicle sticks with the hand-inscribed names I had placed at the end of each row of plants were nowhere to be found, nor were the large river rocks I had lugged to the center of the space for a walkway. Cucumbers were choking out bell peppers, and pumpkins perched atop acorn squash.

Without my attentiveness, my garden had not only proliferated but cultivated itself into a tropical rectangle of chaos. My Montana-girl mind could not even comprehend how all the seeds had managed to germinate, let alone get so darn large. And I was only one month in. Jonna’s plentiful harvest allowed her to do a variety of things with the vegetables, including making pickles. | Photo by Jonna Mary Yost

For the rest of the summer, I weeded, plucked, pruned, and trimmed every split second I could. A snip here relieved a budding pea, a snip there alleviated the hefty stem of a pumpkin from crushing a budding cherry tomato. And despite the competitive drive my produce seemed to adopt, the plants did yield a large harvest.

With a few packets of seeds and literally nothing added onto my water bill, my meals were overflowing with vegetables throughout the summer and into fall and my freezer filled with soups ready to be heated up and enjoyed during the winter when those seasonal goods would be harder to come by. Though my roots remain in Montana, my spirit for gardening can only thrive in Indiana.