In Memoir ‘Crazy Is Relative,’ Past Informs the Present 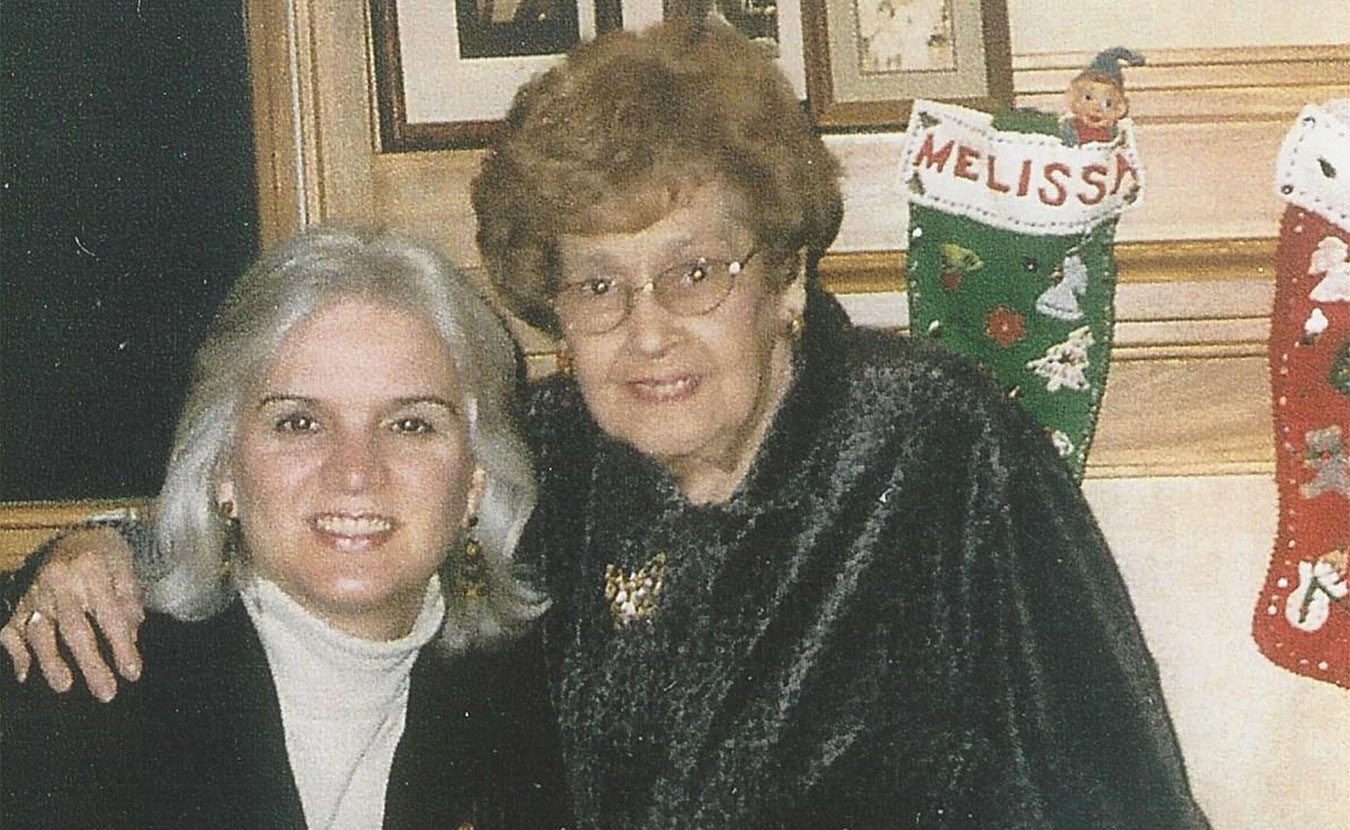 In her memoir, "Crazy Is Relative," Indiana University Professor Melissa Keller, left, writes about her relationship with her “fascinating and hilarious” mother-in-law, Shirley. Shown here in 2002. | Courtesy photo

“My relationship with my mother-in-law, Shirley, was like one of those woven cylinder finger traps I played with in my youth, the kind that is impossible to escape if you’re pulling in different directions,” writes Melissa Keller, in the prologue of her debut memoir, Crazy Is Relative (TMI Publishing, 2017). This heartfelt memoir tells the story of the relationship between a daughter- and mother-in-law, and how past informs the present. When Keller married her husband, Thomas Kuhn, in 1984, she dreamed of being the perfect daughter-in-law. She soon realized her mother-in-law, Shirley, was unimpressed. “I came in with all this earnestness, and I wasn’t getting the result I wanted,” says Keller. “I was just surprised by that attack of high self-esteem.”

Keller describes Shirley as “fascinating and hilarious.” She was known to say and do absurd things, and, in the early years of her marriage, Keller realized how misplaced her expectations of their relationship had been. When Keller and her husband had children, there were more challenging moments with Shirley and clashes over parenting styles — like Shirley teaching her preschool-aged grandchildren how to open bottles with childproof caps, or reading a first-aid manual as a bedtime story (see the excerpt below). Her children, Ben and Alison, adored their grandmother, nevertheless. “They saw me with my hands on my hips way too often,” Keller says with a laugh about those years.

Still, Keller had a “total unwillingness to give up,” and for as strange and off-putting as the occurrences were, Keller never considered leaving the family. Instead, she documented the “baffling and intriguing” moments. She wrote in journals, scribbled conversations on scraps of paper, and eventually typed up stories — anything to help her make sense of this woman and their relationship.

For most of this time, Shirley lived in Indianapolis while Keller was in Bloomington, and, over the years, Keller amassed countless pieces of paper. She held onto them, not knowing that, eventually, those otherwise forgotten memories would create a memoir.

Crazy Is Relative is split into two parts: Rules of Engagement and Rules of Commitment, both of which hold double meanings. As time passed, their relationship developed and Keller slowly uncovered more about Shirley’s troubled past — experiences Shirley didn’t openly speak about. “The unfolding of that information helped me understand her so much better,” says Keller. For instance, Keller learned that Shirley’s father abandoned the family when Shirley and her siblings were children. Soon after, in 1928, Shirley’s mother, Fay, was institutionalized, which led to Shirley and her siblings growing up in an orphanage.

“[Fay] was poor, female, and lacked support in a very tough time for those conditions,” explains Keller, who has done much research on the topic. So given this situation, Shirley — also institutionalized, yet in a different way — visited her mother only on occasion. With new context, Keller recognized their interdependence — Shirley later moved to join them in Bloomington and spend even more time with the family — and began to redefine what a great relationship looks like. Once this shift happened, an idea sparked for the memoir.

Keller hopes readers take away two ideas. First, that when families are joined — by marriage, adoption, or something else — we learn to adjust in small ways. These tiny shifts eventually lead to greater transformations for everyone involved.

Writing the memoir was an enjoyable process for Keller, who is also a clinical assistant professor in the Indiana University School of Education. She’s part of two writing groups and credits her support system for encouraging her to finish the book. “The only part that wasn’t fun was finding all the scraps of paper,” she admits.

Because the story is an intimate account of her family’s life, Keller took great care to write respectfully of all characters and seek permission when possible. Nearly everyone, especially her husband and children, were “hilariously open” to sharing these stories.

Though Shirley knew Keller was writing about her, she passed away prior to seeing the book. On her last Thanksgiving, which Keller says was “not an easy one,” Shirley left the family with another hilarious memory, one that goes full circle.

That day, Keller’s son, Ben, brought his future wife, Honna, to meet the family for the first time. “She got an eyeful,” says Keller. Suffering from deteriorating health, Shirley had a sudden lucid moment at the beginning of the meal. Snapping back into the present, Shirley announced to everyone at the table that she was “‘really sick of having Melissa say what we’re grateful for — pick someone and tell them what they could do to improve themselves’” remembers Keller.

But just as Keller stayed after the strange first meeting with her in-laws, so did Honna stay that day. Keller has “the profound hope [Honna] never has any cause to write about me.” Keller now has a 6-week-old granddaughter, to whom she most likely doesn’t plan on reading first-aid manuals.

In the future, Keller plans to write a second book exploring Shirley’s family history and complicated upbringing in Indiana. “It was tragic and is a story that’s worth exploring,” Keller says.

Through this journey, Keller has learned important lessons, not just about being a daughter-in-law and learning to adjust expectations but also on recognizing how people navigate this world. “Histories come to us,” Keller says. “That defines normal and, therefore, crazy is relative.”

Keller will present Crazy Is Relative on Thursday, October 12 at 7 p.m. in the Firebay Theater at the Ivy Tech John Waldron Arts Center. The event is free and limited seating is available for the first 90 people to arrive. If you can’t make it to the signing, the memoir is available on Amazon and CreateSpace. For more information visit Keller’s Facebook.

Excerpt from Crazy Is Relative The Peacock children around the time when they were headed to the orphanage: (clockwise from left) Dot, Shirley (age 8), Georgia, Donald, Roberta. | Courtesy photo

My relationship with my mother-in-law, Shirley, was like one of those woven cylinder finger traps I played with in my youth, the kind that is impossible to escape if you’re pulling in different directions. We were bound together by our love for her son and my husband, Thomas, and eventually, two grandchildren, but never agreed on what our connection should look like. I thought we should be the best of friends. Shirley responded by putting up a formidable wall, one of the few boundaries she’d ever established as far as I could see. I never viewed the wall as insurmountable, much to Shirley’s dismay, and spent years demonstrating how much I cared, mostly because I couldn’t let go of a picture of the bond I thought we should have. This image was thwarted not only by her resistance to my overtures, but by the fact that they eventually became forced, something she must have spied early on, given her impressive bullshit detector. Over time, I noted how often my inner voice that expressed love for my mother-in-law was countered by another, saying, dear God, she is deranged.

I felt guilty when such thoughts crept into my consciousness, especially as I learned over time about her growing up as an orphan. Sometimes I would remind myself that she was doing the best she could, that she meant well. It took a lot of growing up for me to see the condescension of this view. But she did provide ample material to make a case against her in my more defensive moments. How do you make sense of a grandmother teaching her preschool-aged grandchildren how to open bottles with childproof caps? Or choosing first aid books for bedtime stories? I still recall her voice as she read to my children:

Once upon a time, a little girl stuck her finger in the socket in the wall. Now she’s passed out and somebody’s pokin’ her with a stick. Let’s find out what happens to her. And this little boy just split his head open like a coconut! Wonder what they say we oughta do about that.

Like so many aspects of her life, when it came to grandparenting, my mother-in-law blazed her own trail. …

Overall, this is a tale of my relationship with my mother-in-law, built on a foundation of miscommunication, frustration, and détente. In her final days, when Thomas and I moved her into our home, she expressed surprise that I would allow this. “I guess she really does love me,” she said to Thomas, who, having observed our failure to bond for a quarter-century, laughed and said, “I think she really does.”