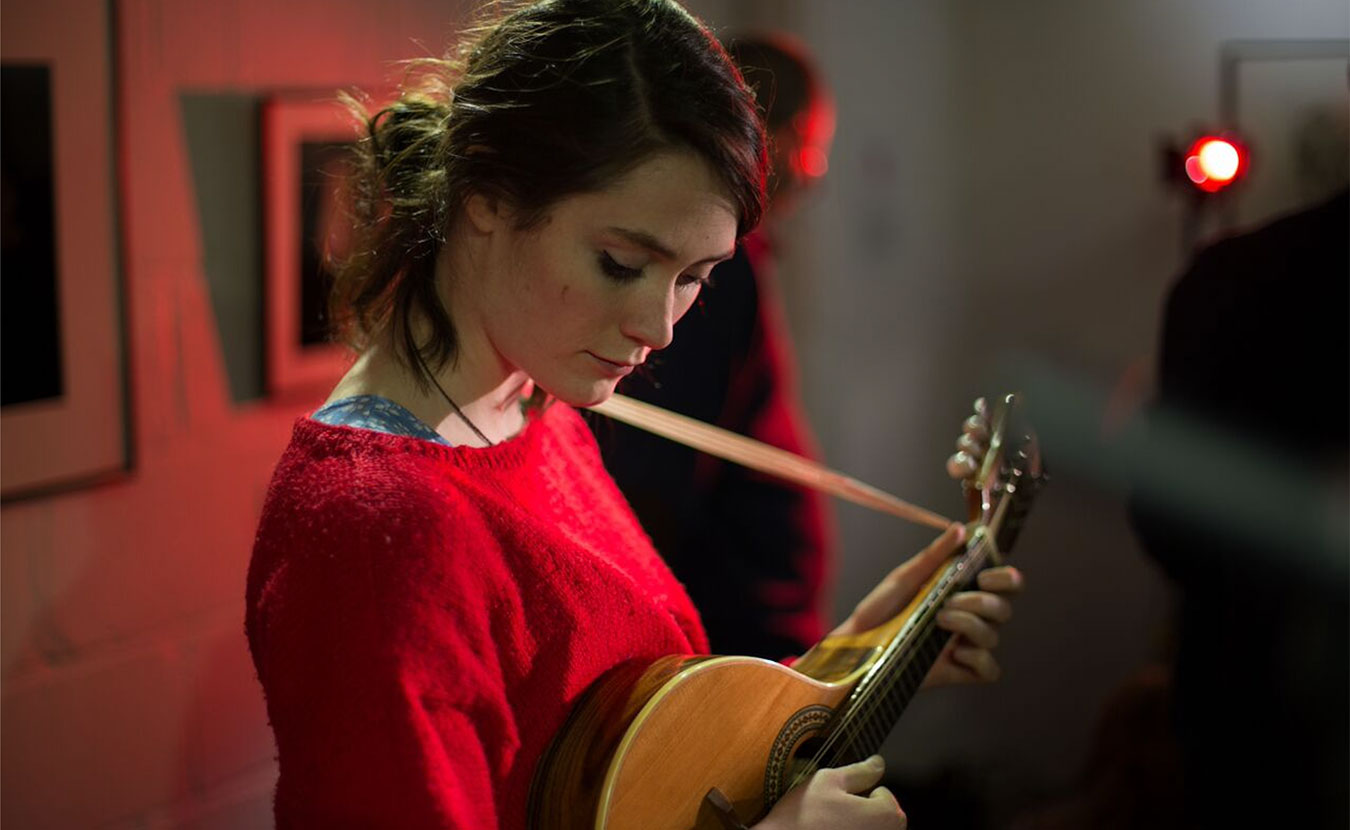 Rachel Sermanni, a 25-year-old singer-songwriter from Scotland, will perform at the Lotus World Music and Arts Festival on September 29 and 30. | Photo courtesy of Ian Wallman

[Editor’s note: This is part 4 of our series by Benjamin Beane on some of the bigger-named performers at the 24th annual Lotus World Music and Arts Festival. Click here for part 1 to see the lineup of this year’s Lotus. Click here for part 2 to learn more about the string trio Väsen, from Sweden; and Alash, master throat singers from Tuva, a small republic in the heart of Central Asia. And click here for part 3 to read about Meklit, an Ethiopian-born, Oakland-raised, Ethio-jazz musician and philanthropist; and Iranian Sahba Motallebi, a modern master of the centuries-old, lute-like stringed instruments from Persia — the tar and setar — and an innovative teacher of Persian music. It’s time for Lotus!]

“Before I knew I was playing this festival, I knew nothing [about it]. That may be because I live so far away. The name, in itself, appeals; a lotus is a very beautiful thing, literally and symbolically.”

Born and raised in the Highlands of Scotland, Rachel Sermanni draws inspiration from the quieter, wider spaces of Scotland and her experiences from childhood. The 25-year-old singer-songwriter will perform at the Lotus World Music and Arts Festival on September 29 and 30.

“The scene in Scotland has a backbone of tradition, which isn’t always prevalent in other countries,” says Sermanni. “Despite my own music being quite different, leaning towards a divergent feel and sound, I still feel the education I had in my school days — and my love for a good traditional session and a beautiful traditional tune — feeds into my own.”

Sermanni’s debut album, Under Mountains, released in 2012, was recorded at Watercolour Studios, located in the West Highlands of Scotland, creating the perfect environment back then for the 20-year-old Sermanni to perfect her mystical craft. A lot of the imagery Sermanni used for the album stemmed from observations or imaginings from being in the Highlands.

Less than three years later, Sermanni released her second studio album, Tied to the Moon, which opened to critical praise. The Guardian rated it four out of five stars and stated that Sermanni was “proving herself to be one of Britain’s most promising folk artists.”

Although the artist has enjoyed consistent acclaim, Sermanni tries not to concern herself with the reception of her work and, instead, focuses on making music meaningful to herself. “People will always have an impression of you or your work, and sometimes it doesn’t align with your own idea,” she says. “This used to be a challenge, but these days I’m easy with another’s idea and comfortable enough as to not to worry if it doesn’t ring true internally.”

Along with her two studio albums, Sermanni’s discography includes four EPs, The Bothy Sessions, Black Curtains, The Boatshed Sessions, and Everything Changes, as well as a live album, Live in Dawson City, which was recorded during her performance in Dawson City, Yukon, Canada.

One highlight from the many tours Sermanni has taken over the last several years is jamming with Mumford and Sons on a beach in Ullapool, Scotland. After attending their concert, she happened to run into them at a local bar and asked if they wanted to jam together. In addition, Sermanni toured with English artist Fink and opened for legendary musician and producer Elvis Costello. Some musicians go their whole careers with fewer notable experiences, but Sermanni, the self-proclaimed “veteran” of the road, has learned to take what life gives her.

“I learned about being gentle to [myself] and keeping disciplined on the road,” she says. “The many shows also developed my voice, performance, and general understanding of what it is to be alive — so I’m very grateful.”

Now living in Edinburgh, Sermanni used to dream of living in Canada or Berlin, and even spent extensive time in both, but Scotland’s vibrant music scene, the kindness of the people, and the unparalleled views of the countryside keep her content. She has no immediate plans of leaving.

But that doesn’t mean she won’t continue traveling for performances and to collaborate with other artists. Her newest album, which will be released in 2018 and is yet to be named, is a collaboration with Axel Reinemer of Germany-based Jazzanova Studio. The album’s band also comprises Max Andrzejewski on drums, guitarist Paul Santner, pianist Declan Forde, and double bassist James Banner.

As her career moves forward, Sermanni feels increasingly interconnected with artists and places within the musical world. “I feel part of a much bigger and broader musical spectrum and community,” she says. “It spans the globe. The scene seems to expand further and further and nothing seems too different from one human, and one place, to the next.”

Following Lotus, Sermanni will head back to the United Kingdom for an October 5 performance in Glasgow. Her Lotus performances may be the best chance stateside fans will have to see her in a smaller venue, as the budding artist doesn’t expect to return to the U.S. until 2019, and when she does, tickets to her shows may be in much higher demand. While Rachel Sermanni is one of the younger performers at this year’s Lotus Festival, she’s still more than twice as old as Giri Peters, age 12, and Uma Peters, 10, a Nashville-based brother/sister roots and bluegrass duo who will perform September 29 at 7 p.m.

The initial draw to the Indian-American prodigies may be their age, but their vocal harmonies and instrumental play are what have brought them award-winning praise. Among other accolades, Giri was named Entertainer of the Year for best instrumental performance and earned the Bobo Driver Fiddle Award for beginner fiddle at Tennessee’s 44th Annual Smithville Fiddlers’ Jamboree and Crafts Festival in 2015.

The talented duo has caught the eye of not only festival judges but also some popular bluegrass musicians. Rhiannon Giddens, a celebrated singer, violinist, banjo player, and founding member of Grammy Award-winning band Carolina Chocolate Drops, met with Giri and Uma while in Nashville, filming scenes for the appropriately named television show Nashville, and gave them tips she learned when she was first starting out.

Though their family has few ties to the bluegrass genre, the duo was inspired to pick up its instruments after watching The Goat Rodeo Sessions, a collaboration between some of the industry’s best instrumental performers.

A little over three years later, Giri has already released an album, Just Whittlin’ Around, which features Uma on two of its tracks. The album also features songs that Giri wrote, including Zoey’s Reel, written for his dog.

Bluegrass aficionados can rest assured knowing Giri and Uma did not get the gig solely because of their age, but because they are considered among the best artists in their craft.