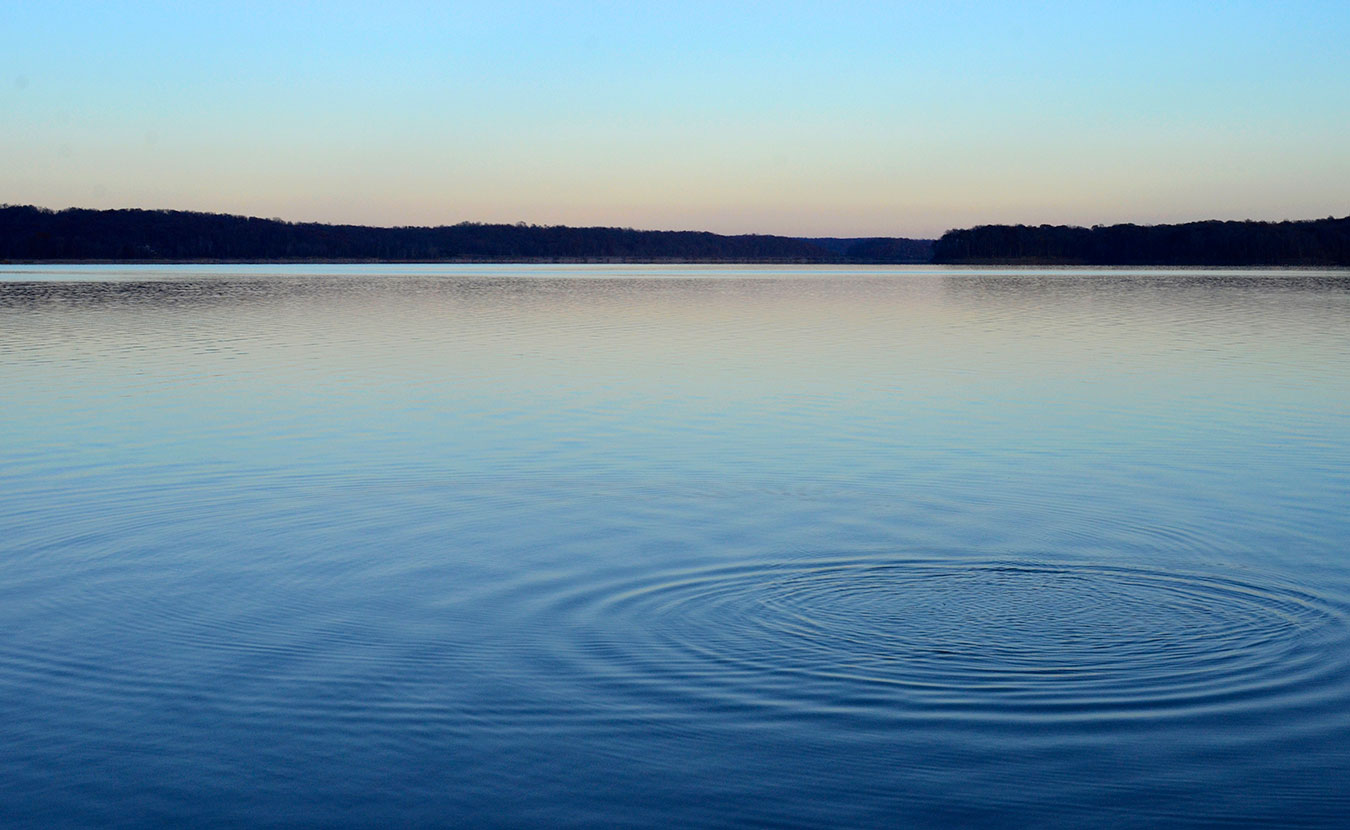 The Lake Monroe watershed — the land and creeks that drain into the lake — includes parts of five counties. Friends of Lake Monroe are safeguarding the lake — along with our drinking water and the plants, fish, and wildlife — from the effects of runoff and logging. | Photo by Lynae Sowinski

Picture an enormous sink with a correspondingly large drain. Now imagine that “drain” is Lake Monroe and the “sink” surrounding it — made up of Monroe, Brown, Jackson, Bartholomew, and Lawrence counties — is the Lake Monroe watershed. Stormwater runs off of the land and into Lake Monroe from a 432-square-mile area that includes portions of each of these counties. Originating from forests, farms, and points in between, the makeup of that water runoff varies widely, and, for better or worse, it affects the health of Lake Monroe. “We are especially concerned about any proposed logging along the shoreline,” says Sherry Mitchell-Bruker, founder of Friends of Lake Monroe. | Limestone Post

“All of these have different types of runoff and different amounts of runoff,” says Sherry Mitchell-Bruker, founder of Friends of Lake Monroe. “The ideal is to have as much of the watershed as we can in the type of land use that is least damaging to the lake, but that’s not always going to happen. So we have to understand how to use the land in a way that benefits the owners of the land that also protects the watershed and the streams and the lake.”

Little more than a three-hours’ drive from Bloomington sits Ohio’s Grand Lake. Situated between Celina and St. Marys, Ohio, Grand Lake is considered a worse-case scenario. “The water quality was getting worse and worse, and people were just kind of ignoring it,” Mitchell-Bruker says. “They were still swimming in it, still using the same drinking-water treatment methods, and so forth.”

In 2011, the Grand Lake watershed was officially designated as “distressed.” These days, levels of harmful algae are so high that dead fish litter the shoreline and bob on the lake’s surface — and would-be swimmers are urged not to get in the water. According to Guardians of Grand Lake St. Marys, a local Grand Lake advocacy group, the lake’s woes are largely due to manure- and phosphorus-rich agricultural runoff. The group estimates the dying lake has lowered the community’s property values by as much as 40 percent, halved local business revenue, and increased unemployment.

“If you’re not being really proactive about managing the lake and the watershed, the process of eutrophication takes over, and it’s very hard to stop it at a certain point,” Mitchell-Bruker says.

Eutrophication happens when excess nutrients get into a body of water, in turn fueling the dense growth of certain algae. Taking over, this dense monoculture growth outcompetes other aquatic plants. Eventually, the massive algae bloom itself dies back, and bacteria break down this dead plant material. During this process, the bacteria use up oxygen in the water that would otherwise support fish and other aquatic animals. The levels of available oxygen can become low enough to cause massive fish die-offs. How long it can take to recover from oxygen depletion — years or decades — depends on many factors, including water temperature, depth, the presence and amount of turbulence in the body of water, and more.

What friends are for

While Lake Monroe has less agricultural runoff than Grand Lake, reports of blue algae in Lake Monroe are problematic. And algae growth isn’t the only concern. Formed in the spring of 2016, Friends of Lake Monroe hopes to study the health of Lake Monroe and its watershed and then put together a management plan that identifies and prioritizes areas of focus. “We’re pulling together a technical group to look at the data and data gaps. We’ve contacted the [U.S. Army] Corps of Engineers, the Department of Natural Resources, Hoosier National Forest, Department of Environmental Management, the Soil and Water Conservation District, City of Bloomington Utilities, Nature Conservancy — all of these people we’re starting to work with toward getting this together and analyzed and ready for the next step,” Mitchell-Bruker explains. While Lake Monroe and the perimeter of land at its shoreline is owned by the Corps of Engineers, it is managed by the Indiana Department of Natural Resources. The Lake Monroe watershed. | Map from the the Monroe Lake Master Plan

In part, Friends of Lake Monroe will build upon the comprehensive “Lake Monroe Diagnostic and Feasibility Study,” published by the Indiana University School of Public and Environmental Affairs in 1997. Dave Simcox, a Friends of Lake Monroe steering committee member, says, “That report was more of a good science work with identifying [issues], but there wasn’t a lot of government followup on the recommendations.”

Getting agencies and members of government to the table is the ultimate goal, Simcox says. “We all need to work together and figure out how to sustain this lake.”

But what about counties within the Lake Monroe watershed that may not directly benefit from a healthier Lake Monroe? In the case of agricultural areas, farmers could be offered incentives, such as grants or tax breaks, to plant grass strips near streams, creeks, and ditches to help trap runoff from their fields. (When planted near animal feedlots, such strips were shown to reduce sediments by up to 80 percent and nutrients by 60 to 70 percent.) Planting filter strips is just one of many agricultural practices that could make a big difference. Some runoff effects can cause oxygen depletion, leading to massive fish die-offs, which can take decades to correct. | Limestone Post

Following proven construction and forestry techniques in watershed areas would help, too. “We are especially concerned about any proposed logging along the shoreline and any effects that might have,” Mitchell-Bruker says. “But if those types of activities do go on, we want people to use best management practices to ensure that the soil does not run off into the streams or the lake.”

She continues: “We have much less control over what happens on private lands, so it’s very important to reach out to landowners and help them understand the impacts of their land management decisions.”

Bottom line? “It’s a lot easier to keep pollutants from entering the water,” Mitchell-Bruker says. “Once they get in the sediment and they sink to the bottom of the lake, they sit there until chemical conditions are right for that constituent to get mixed into the water column again. So it can take a very, very long time to clean up.” It’s a lot easier to keep pollutants from entering the water than it is to get them out later. | Limestone Post

How You Can Help

Keep in mind, while land within the Bloomington city limits is not a part of the Lake Monroe watershed, it drains into local streams and rivers that flow into Salt Creek south of Lake Monroe and, eventually, to the Mississippi River.

When she's not writing, Brackney tends her small greenhouse and gardens. “I'm gradually eliminating my lawn. It's good for bees, but, also, I'm lazy! Mowing's just always seemed Sisyphean to me,” she says.
Lynae Sowinski

Vice President, Board of Directors at Limestone Post
Lynae joined Limestone Post in the summer of 2015. She works with all contributors and manages the editorial content for the site.