Local Film at the Heart of Middle Coast Film Festival 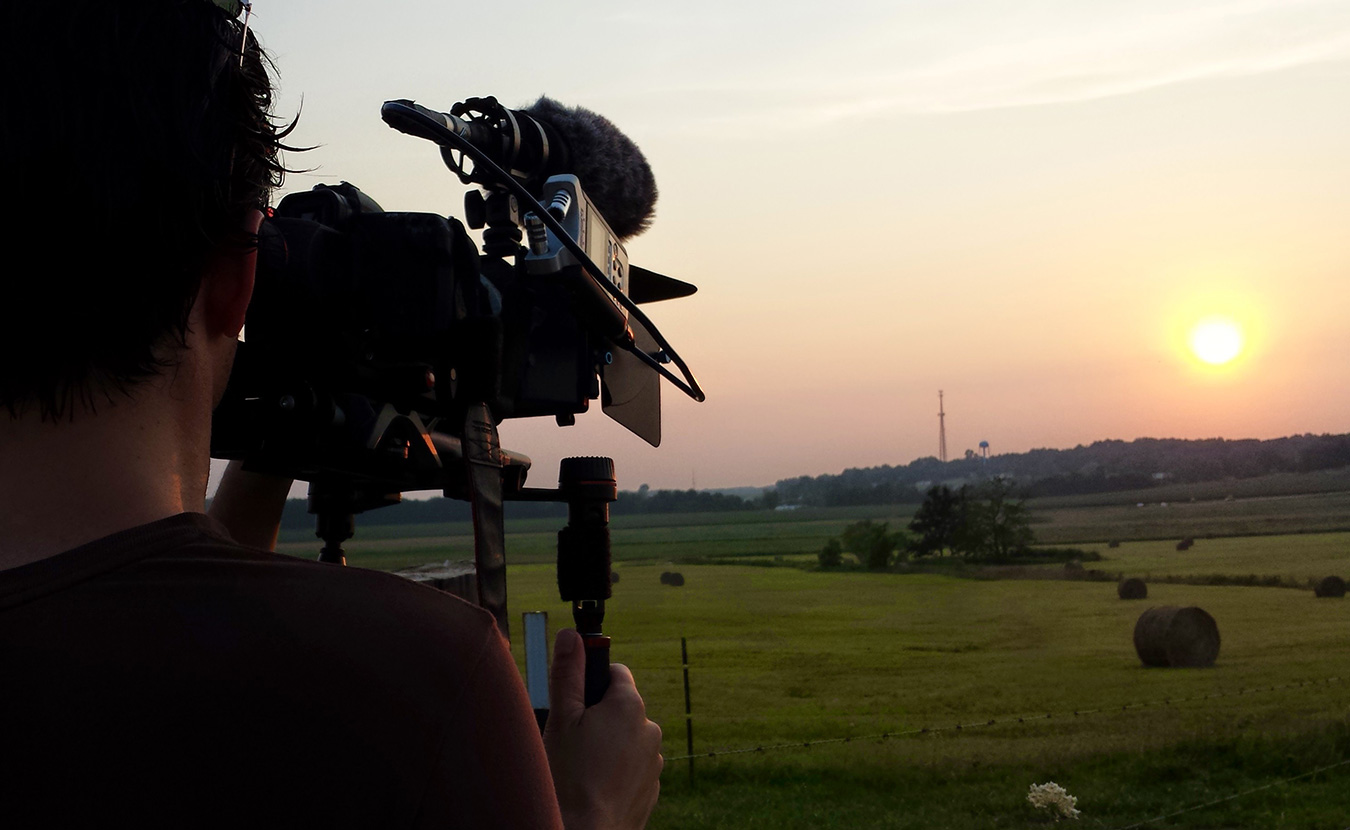 The locally made film "Above the Fruited Plain" exemplifies “independent, do-it-yourself filmmaking that the coasts aren’t creating,” says Jessica Levandoski, co-founder of Middle Coast Film Festival. A leading force for filmmaking in the Midwest, the festival will screen 82 films at five venues July 28–30 in Bloomington. | Photo courtesy of "Above the Fruited Plain"

Jessica Levandoski is from Austin, Texas, which often leaves her with some questions about the Midwest:

“Why are these people so nice? What do they want?” she asks. “They don’t want anything, they’re just nice.”

As the director and co-founder of Bloomington’s Middle Coast Film Festival, Levandoski has been finalizing this year’s schedule, which will run from July 28 to 30. Now in its third year, the festival has grown to 82 films screening at five venues: The Buskirk-Chumley Theater, The Back Door, The Blockhouse, Monroe County Public Library, and the Ivy Tech John Waldron Arts Center. In addition to showing films, the festival includes panel discussions, Q&As, workshops, and networking events with experts from around the country. Levandoski says she and co-founder Chelsea Sanders didn’t know each other prior to the festival’s first year, but, after meeting via mutual friends, the two realized they had similar goals for the community. Living with the mindset of if you build it they will come, Levandoski and Sanders sought to enrich Bloomington’s film community.

“How do we say that we want to be like the coasts, but we want to be us?” Levandoski asks. “We just really wanted to evoke this image of the Midwest being a place where a lot of things are incubated without the rush of city life.”

One of these Midwestern projects will premiere at this year’s festival. Above the Fruited Plain, the feature directorial debut from Geoffrey George of Bloomington’s Downtime Studios, is the festival’s only feature-length film shot in southern Indiana. Incorporating a mostly local cast and crew, Levandoski says, Above the Fruited Plain is a fine example of independent, do-it-yourself filmmaking that the coasts aren’t creating.

The film tells the story of Abe and Cammy, two high-school–age Midwestern kids who run away from their homes and a world of poverty and drug dealing. Director Geoffrey George on location. | Photo courtesy of “Above the Fruited Plain”

“It’s a story about the heartland, so the entire time we knew it was going to be about Bloomington [and] growing up in the Midwest,” George says. “It’s a story of people hurting and [life’s] stresses on the American dream. I feel like it’s a perfect, iconic representation of the struggles of Americans today.”

Emma Loveland, one of the producers of the film, says even though much of it was shot in Bloomington, they deliberately chose to keep the setting ambiguous.

“It’s a more iconic representation of what it’s like to grow up in the Midwest,” she says. “That way, it makes it more relatable to a larger audience. People’s lives here are a lot more complicated than people who live elsewhere think.”

Shooting his film in Bloomington came with Midwestern hospitality, George says. Beyond the local cast and crew, much of the catering, housing, and even funding came from local outlets.

“If you choose to make a film here in Indiana, you have to cultivate the entire community,” George says. “There’s not a ton of resources in the area. There’s a lot of creative energy and potential, but I don’t think there’s really a film economy whatsoever.”

Logan Hunter, a local actor and entrepreneur, plays the role of Doug, Abe’s deadbeat father. Having spent years in New York City as a professional actor, Hunter says the community effort on Above the Fruited Plain was much different from the typical East Coast rush.

“I think one of the best things that comes out of shooting in the Midwest is the community,” he says. “Everyone who is not in the film industry, they want to help, and they want to be a part of it. They don’t want money, and they don’t want a paycheck. They just want their name at the end of the credits.”

Although George says it’s essential for local filmmakers to tell local stories, it becomes difficult to do so without a film economy like the ones in Los Angeles, Atlanta, and New York City.

Local actor Logan Hunter, who plays Abe’s deadbeat father, says the community is one of the best things about shooting a film in the Midwest. | Movie still courtesy of “Above the Fruited Plain”

To combat this financial struggle, Levandoski and Jon Vickers of the IU Cinema have put together the Indiana Film Production Tax Credit committee. With Indiana State Representative Matt Pierce taking a bill to the floor in 2017, Levandoski says she hopes the bill will result in new funding for local film productions, similar to laws in other states.

“It’s not that we don’t have the resources; we’re just not organized,” she says. “People’s minds need to change that filmmaking isn’t going to bring Hollywood-types to town.”

Sam Fain, who plays Thad (Abe’s drug dealer — a “gruff, bearded dude” who lives in his mom’s basement) in Above the Fruited Plain, says people often overlook the towns they live in as places to film. While living in Indianapolis for ten years, he says he often skipped over many of the beautiful parts of town, which would have worked well for films he has acted in. “When you live in a place like Indiana, I feel like you often forget that your town has these special, beautiful things that other people don’t even know about,” Fain says. “Indiana as a whole has a lot of places like that. To be able to see those and explore them as a storyteller and a filmmaker — it’d be an injustice if [filming there] didn’t happen more often.” For Midwestern filmmakers hoping to get their work into film festivals, Levandoski suggests starting with short films and working your way up. Once a filmmaker has a reasonable budget, she says, then they can begin working on the feature films.

George says the root of all filmmaking is the story, which is the most important thing to capture. With a strong support system, he says Midwestern filmmakers should just start rolling.

“Perseverance and a sense of community are crucial,” he says. “The toys you have, or the money you make, are very fleeting. Just put down foundations and start filming.”

More info, including tickets for the Middle Coast Film Festival, can be found on their website.

Trailer for “Above the Fruited Plain”