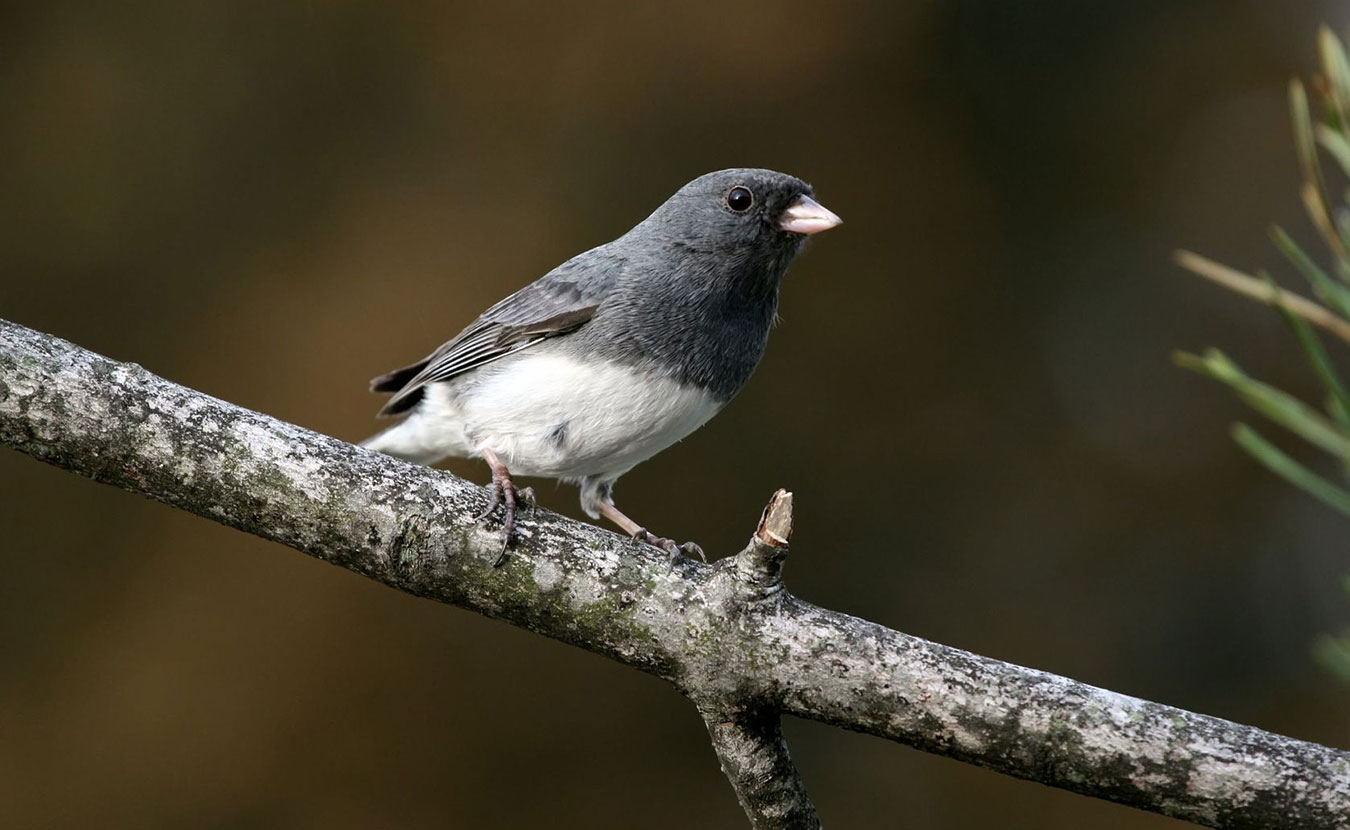 Indiana University Research Scientist Adam Fudickar studies animal behavior in response to climate change. “Many parts of the planet that haven’t changed for a really long time are changing very rapidly,” he says. While many species cannot adapt fast enough, some — such as the dark-eyed junco — can, which provides hope to researchers. | Photo courtesy of ziggy777 / 123RF Stock Photo

When it comes to climate change, there’s no single “canary in the coal mine” foretelling our planet’s point of no return. Melting ice caps, ocean acidification, rising sea levels, Al Gore’s film career … everywhere you look, there’s reason to worry.

By comparison, bird watching seems innocuous, even soothing to the nerves. But when you devote your career to the study of migration patterns of birds and other animals, as Indiana University Research Scientist Adam Fudickar does, you see some trends emerge that are stunning, even troubling, but could turn out to be hopeful.

It should be noted, first and foremost, that Fudickar isn’t a climate scientist. (And no, in case you were wondering, as I was, canaries don’t migrate.)

“I’m interested in behavior,” says Fudickar, who originally hails from Oklahoma and joined the IU faculty in 2013. “And migration is just fascinating to me. Animals and birds migrate thousands of kilometers … tens of thousands of kilometers across continents. They do it when they’re just several months old. They do it all by themselves, at night. And they return back to the place that they were the previous summer.” Fudickar, right, and student Lia Bobay attach a small USFWS band to a fox sparrow’s leg at the Kent Farm Banding Station in Bloomington. The band has a unique number to allow them and other researchers to identify the bird if it is caught it in the future. They also take measurements before releasing the bird back into the wild so they can study the bird’s migration patterns. | Photo courtesy of Eric Rudd, Indiana University Communications

Climate and habitat changes, however, are having significant effects on how birds migrate — and if they migrate at all. Fudickar, who runs an IU lab devoted to understanding such effects and how animals are responding to them, has co-authored 15 papers in academic journals, including Molecular Ecology, Biology Letters, The American Naturalist, and Frontiers in Ecology and Evolution.

Fudickar spends a lot of time in the field gathering data for such writings and helping students wet their beaks (pun intended) in the ways of migratory bird research. He captures and tags birds at the Kent Farm Banding Station in Bloomington with an eye toward analyzing how long-term changes in weather patterns and land use affect them.

Another of his recent research projects involved a study of dark-eyed juncos that had taken up permanent residence in the San Diego area. Until a few decades ago, he explains, these birds had only wintered in southern California, returning in the spring to their breeding grounds in northern California and Oregon. But as these northern areas have become more temperate year-round, and as urbanization in San Diego has brought in nonnative plants and irrigation, providing insects and the necessary breeding habitat, the birds aren’t bothering to go back north each spring.

Some of the dark-eyed junco population still migrates north for the summer, Fudickar says, but when the migrants return in the fall and mix with the sedentary population, that’s when things really get interesting.

“You have these really closely related populations, and they’re doing totally different things in the same environment,” he says, explaining that, historically, the birds’ reproductive systems basically shut down while they wintered in southern California. Today, that’s not the case.

“The migrants’ gonads shrink, and their bodies shift out of reproduction,” Fudickar explains. “If I go [to San Diego] and I catch these birds, the ancestral migrants, before they leave in early spring, their reproductive systems are still shut down, even though they’re in the same environment as this new sedentary population.” Meanwhile, “the sedentary population, they’re growing their gonads, and they’re starting to establish territories. So you have this rapid shift in the seasonal timing of reproduction. And so that’s a nice [systematic way] to see the physiological and genetic mechanisms that can evolve rapidly in a novel environment.”

Fudickar and some colleagues collected specimens of both the resident and migrant junco populations and brought them back to his IU Bloomington lab for further study. His experiments and research concluded that the birds’ gene expression had been altered, leading to rapid physiological change.

“Many parts of the planet that haven’t changed for a really long time are changing very rapidly, and among the animals in those environments, some are adapting to the new environment, and some aren’t,” Fudickar says. “So we see in some urban and suburban areas that a certain species that [previously wasn’t] able to stay in that area can now breed and have a population in that area.” Fudickar and his students catch migratory birds in the Bloomington area. After banding and measuring the bird, they take a feather, which the bird will regrow, that allows them to estimate where the bird is migrating from. Most of the birds caught in the fall and winter in southern Indiana spend the summer in the boreal forests of Canada and Alaska and migrate south for the winter. Here, Bobay is holding a white-throated sparrow and Fudickar is holding a fox sparrow. Both birds are migrants that visit southern Indiana from October to April. | Photo courtesy Eric Rudd, Indiana University Communications

That’s where, among all the bad news concerning climate change, there’s some room for hope. It’s easy to find examples of animal populations “that aren’t succeeding when there are rapid changes in the environment, climate, or habitat,” says Fudickar, but “you can also take the path to finding populations that are, and then find out what they’re doing, what their bodies are doing, what has to happen for that to occur, and then learn about how those animals can or can’t respond [to a rapidly changing environment].”

However, in the case of migratory birds and animals, climate change can have a distinct downside in that it creates a domino effect in ecological systems. As average temperatures rise, the appearance of plants, insects, and other common food sources for birds in the spring — which Fudickar calls “resource pulses” — tends to occur earlier in the year, which in turn can impact the timing of birds’ breeding season, and, consequently, that change can create ripples further up the food chain as competition escalates for resources.

The flora and fauna of a specific area, Fudickar explains, are composed of communities of organisms with resources specific to each species. When the composition of these communities changes, it affects the other organisms in the community. “So, since we’re talking about birds,” says Fudickar, “if you have a new species that’s not native to an area establishing a population in an area, often you will see that populations of native species can be negatively impacted. Those resource pulses are shifting, and for a lot of species, it’s not clear if they can adapt fast enough. In some areas, the onset of spring is changing … and I’m trying to understand [whether] animals can respond.” Fudickar and Bobay are opening mist nets to catch migratory birds at the Kent Farm Banding Station. Bobay is an IU Sustainability Scholar and senior pursuing a degree in environmental science in the School of Public and Environmental Affairs. | Photo courtesy Eric Rudd, Indiana University Communications

Clearly, the dark-eyed juncos that Fudickar and his colleagues study in Southern California are responding well — a phenomenon that Fudickar views in hopeful terms.

“It’s not necessarily an example of a negative impact caused by seasonal shifts in the start of spring due to climate change; you might see it as a positive thing — species taking advantage of an altered environment caused by anthropogenic changes,” he says. “So there’s now a population in a place where previously they could not breed, but now they can breed because of human alterations to the environment.”

Fudickar’s dedication to studying the effects of climate change and habitat loss on migratory birds and animals has been recognized by his recent inclusion in IU’s newly created Environmental Resilience Institute, which was made possible by $55 million in funding from the university’s Grand Challenges Program — an ambitious $300 million initiative launched in 2015 that aims to tackle some of the biggest problems facing the state, nation, and planet.

“I’m highly focused on the mission of the new institute and the Grand Challenge,” Fudickar says. “And one part of the whole thing is dispersal and animal range shifts, and I’m asking if animals have the ability to shift or to respond to a changing environment, whether it’s their climate or habitat.”