With Invasives, an Ounce of Prevention Is Worth a Pound of Cure 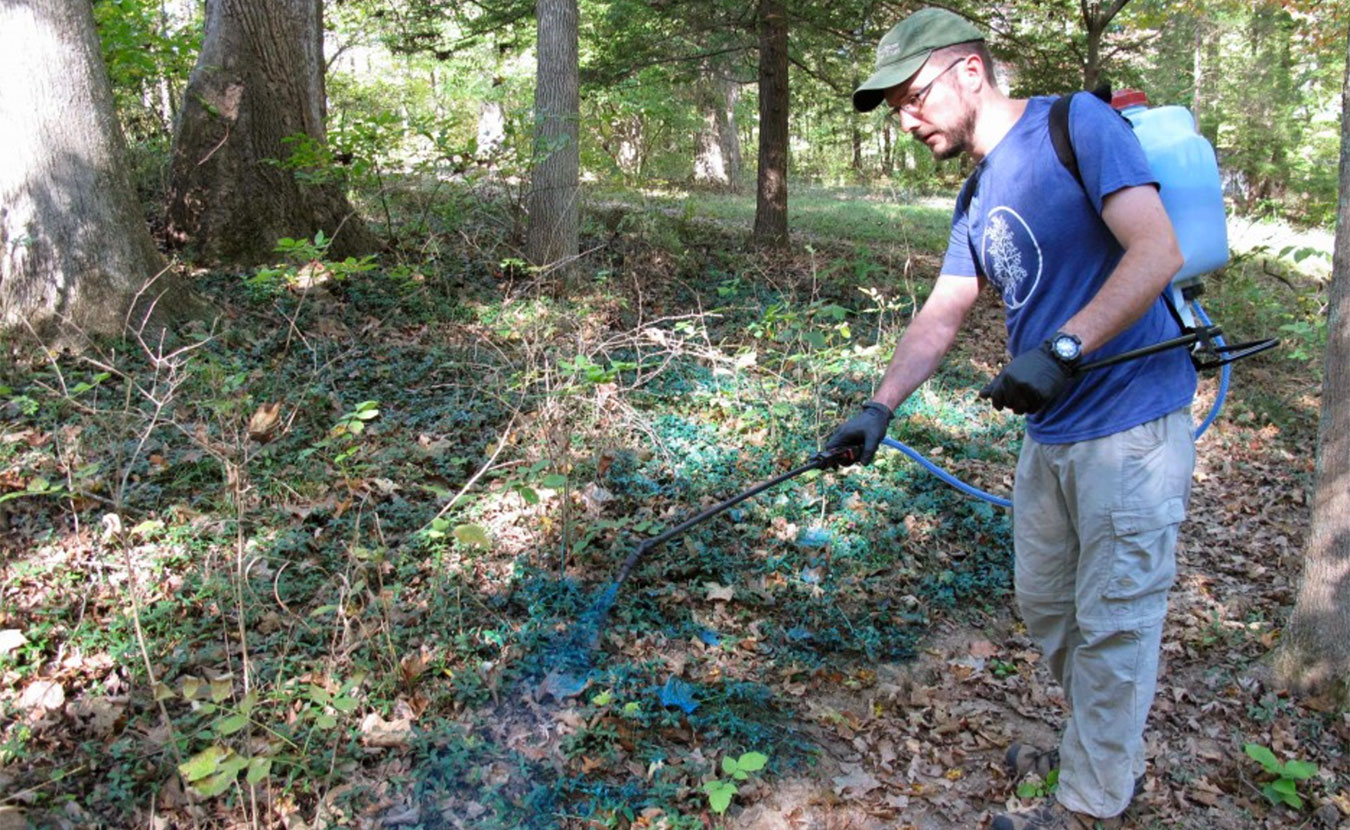 John Lawrence, the assistant director of Sycamore Land Trust, sprays a patch of vinca near the Sycamore headquarters with herbicide. | Photo by Annie Corrigan, WFIU

A carpet of vinca

The saying goes, “An ounce of prevention is worth a pound of cure.”

That’s especially true when talking about invasives — plants that aren’t native to an ecosystem and can grow quickly and crowd out other species. Prevention sometimes involves hand-pulling these nasty plants, and sometimes it involves spraying herbicide.

John Lawrence, the assistant director of Sycamore Land Trust, is suited up with a jet pack of triclopyr, an herbicide specific to broad-leaved plants. In his hand is a sprayer on a wand that allows him to direct the blue liquid to the exact spot he wants to kill.

Today’s project is to try to beat back one particular invasive — vinca — from moving from the front lawn at Sycamore’s headquarters into the adjacent woods.

“It is forming a carpet and in doing so is excluding all the nice native plants that belong here and that interact with all the insects and birds and all the wildlife to create a healthy food web and healthy ecosystem,” he says. The first step in removing the Asian bush honeysuckle is to cut it as close to the ground as possible, then spray herbicide on the still-moist stem. | Photo by Annie Corrigan, WFIU

He points out native plants like bottlebrush grass and white snakeroot growing in other parts of the woods, but in this spot, the vinca is too dense for anything else to thrive. It’s also too dense to pull it by hand. He says it will probably take two or three more applications over the next year to eradicate the vinca entirely.

It came from nurseries

Keith Clay, a distinguished professor of biology at Indiana University, points to the garden and landscaping industries as the way many invasives were introduced. The plants were undoubtedly favored because they were vigorous and adapted to a wide range of conditions. “We see a number of invasive species for sale in nurseries and sometimes they’re unaware, or other times it’s a profit motive overrides any environmental concerns,” he says.

Some of those plants have culinary uses, too. We’ve talked about wild garlic mustard greens on Earth Eats before. There’s also perilla, a member of the mint family.

When non-native plants are introduced, either by human action or on their own, they leave their insect pests and pathogens behind. Pests may eventually catch up, but in the meantime, humans must intervene. While you can pull them by hand, plants like wild garlic mustard greens can produce enough seeds to regrow ten thousand new plants. “The capacity of those plants to reproduce and generate bigger populations is pretty impressive,” he adds. Clay says we’ll always have invasive species in our ecosystem, and, for his purposes, that’s actually beneficial as invasive plants present a research opportunity.

“For example, the idea that pests and pathogens will eventually begin to colonize and attack the invasive species. This is something we’re working on right now with Japanese stiltgrass,” he says. “These fungal pathogens seem to have made a jump onto the Japanese stiltgrass, and we have hopes that maybe it will help bring it under control. Where are these fungi coming from? Did they get here from the native range, or are they jumping from native species or other invasive species? We don’t know, but they’re coming from somewhere, and it’s an interesting question, I think.”

Lawrence organized a volunteer work day at one of Sycamore’s newest areas — the Sam Shine Foundation Preserve. The target today is Asian bush honeysuckle. Volunteers are armed with hedge clippers and spray bottles of herbicide. First, they cut down the bush as close to the ground as possible. Then they spritz on the cut stem.

Lawrence is suited up with a different kind of jet pack today. He’s operating a gas-powered saw to chop down the biggest bushes. He’s eyeing a 12-foot-high Asian bush honeysuckle with a multistemmed trunk. “It’s taking up a lot of space and sunlight and water, and as you can see, this thing is just absolutely loaded with red berries. Every one of those berries is a potential new, invading bush that can be flown for miles before it’s deposited.”

The eventual goal is to get this area back to what it wants to be, whether that be a swamp or a forest.

Lawrence has been doing this sort of work with Sycamore for years, and while it feels like fighting a losing battle at times, there are areas that are showing progress. This is a particularly large bush with thousands of red berries. John Lawrence uses a motorized saw to cut it down. | Photo by Annie Corrigan, WFIU

“There are some spots that I’ve been working on for some years that have finally turned the corner. It’s super rewarding to go back, where five years ago I was out here with volunteers pulling bags and bags of garlic mustard and now there are just a handful. And instead, there are all these beautiful spring wildflowers.”

This type of land stewardship involves having an eye on the future.

“There’s also a bit of a living museum quality to preserving some natural areas in as close to a pristine state as possible,” he says. “People can say this is what Indiana used to look like, but in this human-altered matrix, there’s always going to be a little bit of maintenance work. It’s kind of like fixing the roof on your house. You might get a water leak here or there and you’re going to have to patch it. It’s always going to keep raining outside.”

And there will always be invasives, but both Lawrence and Clay agree that an ounce of prevention is worth a pound of cure.

Earth Eats is a radio show, podcast, and website from WFIU-Bloomington about local food and sustainable agriculture.
Tagged
Comments