Invasive Plants Are Still For Sale in Indiana, How You Can Help 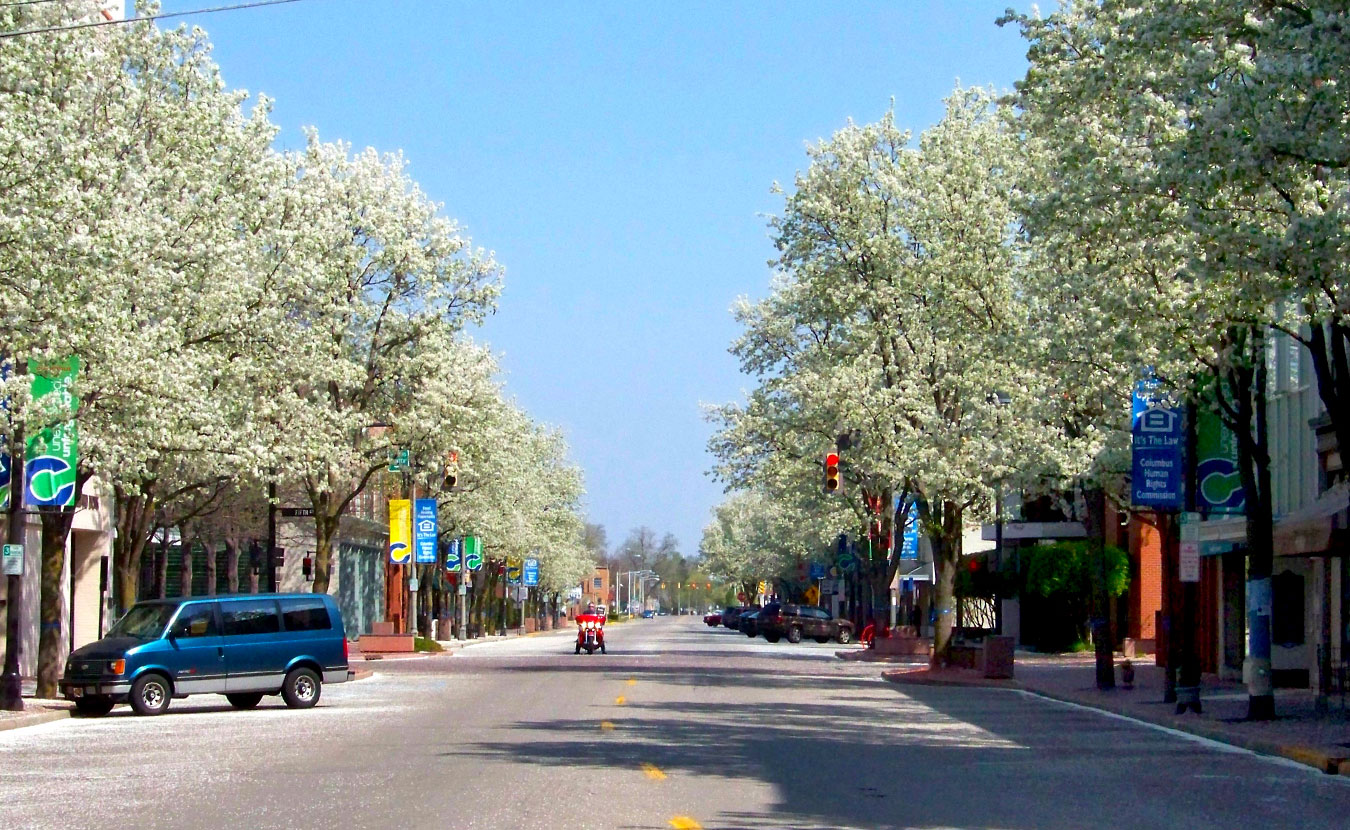 They’re a centuries-old assault on our environment, but eradicating invasive plants, such as the Callery pear tree (pictured here along the streets of Columbus, Indiana) requires more than pulling them out by the roots — especially since big box stores still sell them and red tape in the governor’s office still allows those sales. | Photo by Larry Brackney

Humans have long spread flora from place to place. We’ve bred new cultivars. We’ve even re-engineered plant genes (often without considering the consequences for native plant populations and the animals which depend on them). Academics suggest the landscape trade brought in 85 percent of the woody plants new to North America. Some were ornamentals. Others were erosion controllers. Another 14 percent were forestry or agricultural products.

While these non-native plants aren’t all bad, there are some “invasive” troublemakers. Spreading rapidly, invasives like Asian bush honeysuckle can render forests unrecognizable by shading out native saplings and wildflowers. Some invasives also hybridize native plants. Still others negatively affect soil chemistry.

Controlling invasives is expensive. In a 2012 survey by the Invasive Plant Advisory Committee, 116 Hoosier agencies and landowners reported spending $5.85 million to manage invasives on 650,000 acres. What’s more, six of the top ten invasives being managed are still sold here in Indiana. Gardeners can buy many of the worst offenders — like Asian bush honeysuckle and purple wintercreeper — at some nurseries and big box stores. Meanwhile, the Bloomington Parks and Recreation Department closed a six-acre swath of the Bloomington Rail Trail for a week in March to battle both of those invasive plants.

Unwitting gardeners and Indiana’s land managers are working at cross purposes. Poor public awareness, continued sales of invasives, and limited regulation are to blame. Ellen Jacquart chairs the group Monroe County–Identify and Reduce Invasive Species (MC–IRIS). “You’ve got a plant that we say is invasive,” Jacquart explains. “But the gardener says, ‘Yeah! It’s easy to establish, it grows really fast, and it produces lots of fruits and flowers!’ [Gardeners] like it, because it’s easily available. Sellers know they can get it, because it’s easy to grow. It’s a cycle that encourages the weediest plants to be the most popular.”

The Indiana Department of Natural Resources Division of Entomology & Plant Pathology has drafted a terrestrial invasive plants rule. “Five plants would be considered ‘prohibited.’ If we found them anywhere in Indiana, we’d need to eradicate them,” Division Director Megan L. Abraham says. “Another 39 plants are at the ‘restricted’ level. They’re not allowed to be sold, moved, or traded in Indiana.”

To decide which plants to include, a subgroup of the Invasive Species Council assigned different species an individual “Invasive Rank” of low, medium, or high. Analyses of the financial impact on business and state government were performed for plants deemed highly invasive. Normally, these data would move on to the Natural Resources Commission for a vote on preliminarily adoption of the rule. And after that? For the next nine to twelve months, the rule would enter a period of public comment, as well as legal and governor’s office review. However, before the ruling can go through these usual steps, it must clear a new hurdle.

Thanks to a Gov. Mike Pence-era “rule moratorium,” the proposal’s next stop is the Office of Management and Budget. “To reduce regulatory impact that government plays on businesses, the rule moratorium made it a requirement to pass any new legislation through the governor’s office prior to being sent through the regular channels,” Abraham notes.

And, so, the draft has been in limbo since late October. To help move it, MC–IRIS instituted an email campaign. “We want people to tell Governor Eric Holcomb that banning the sale of invasive plants in Indiana is a priority,” Jacquart says.

Some invasives with high economic value were left off the state list, because including them would have required even more fiscal and legal analysis as well as further governmental oversight. But gardeners and landscapers can be part of the solution. Here are ten worst-of-the-worst invasives that are still commonly sold — along with native alternatives. 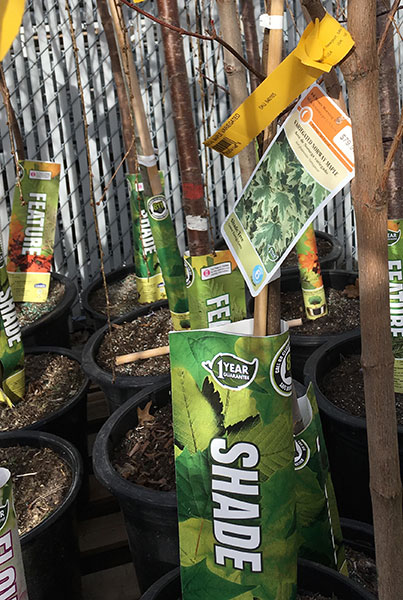 A variegated Norway maple for sale at a local big box retailer. | Photo by Susan Brackney

This fast grower was popular with landscape architects for its drought and pollution tolerance, small stature, and showy flowers. Some cultivars include Bradford, Aristocrat, and Chanticleer.

The problem: Readily self seeds (due to wind and animal activity) along highways and throughout forests. “The general public doesn’t know about the invasiveness of Callery pear,” says Abraham.“They have no idea that those bushy trees that are popping up on the side of the highways with the white little flowers weren’t intentionally planted there. It’s been used for so long in these subdivisions especially by the contractors because it’s a cheap, fast-growing tree. People are just now starting to become aware that there’s an issue.”

The problem: Extremely shade-tolerant, this invasive crowds out native saplings and wildflowers.

Evergreen, fast-growing ground cover spreads with runners. Introduced as an ornamental in the 1900s, euonymus creates a dense, green mat. 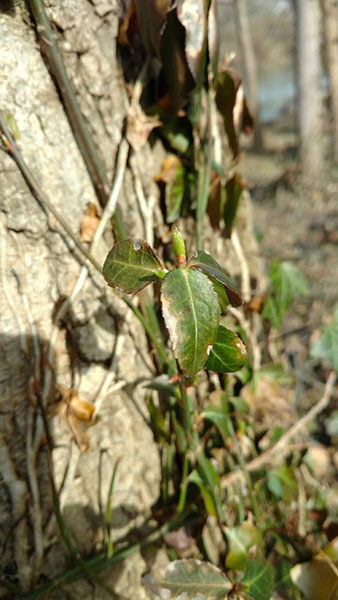 Purple wintercreeper makes its way up a tree. | Photo by Larry Brackney

Ornamental shrub imported to the U.S. from Asia in the late 1800s. Beloved for red fall foliage.

The problem: “We’re seeing that red foliage show up in every forest in Monroe County. You go around in the fall and you see how it’s invading,” Jacquart says.

Asian bush honeysuckle was often used as a sweet-smelling hedge and, ironically, as wildlife habitat.

The problem: Miscanthus requires lots of sunlight. Rather than invade forests, it runs through disturbed areas, near power lines, and in open habitats — including prairies. 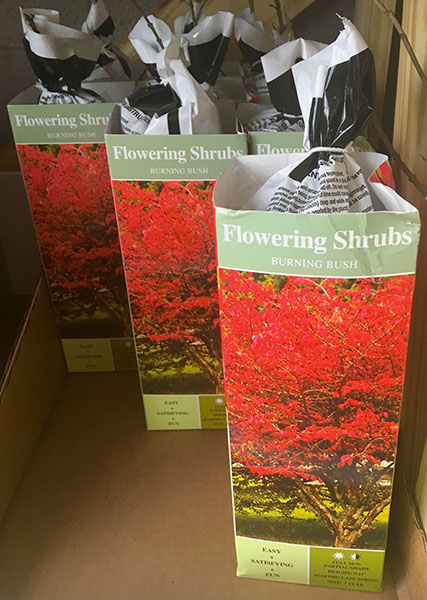 Prized for fast growth and strong climbing, this ground cover has been used to cover walls and homes.

The problem: Highly adaptable. In forests, it creates dense canopies of shade which can weaken, pull down, and kill trees.

With twisted limbs and large, drooping blossoms, Chinese wisteria can live for several decades. Imported as an ornamental in the 1800s.

The problem: See Brown County forests in mid-April for this invader’s effects. “It was planted at the T.C. Steele historic site, and it’s now moved into the surrounding forest. The trees are all purple with wisteria,” Jacquart says.

Native alternative: American wisteria is not invasive and just as pretty.

This herbaceous plant isn’t sold in stores, but, brought as a medicinal and culinary herb by Europeans, it now grows freely everywhere.

Controls: One garlic mustard plant produces several thousand seeds which are easily spread by hiking boots, pets’ paws, and in the treads of bike tires. Dig out plants by their roots — before they’re able to set seed.