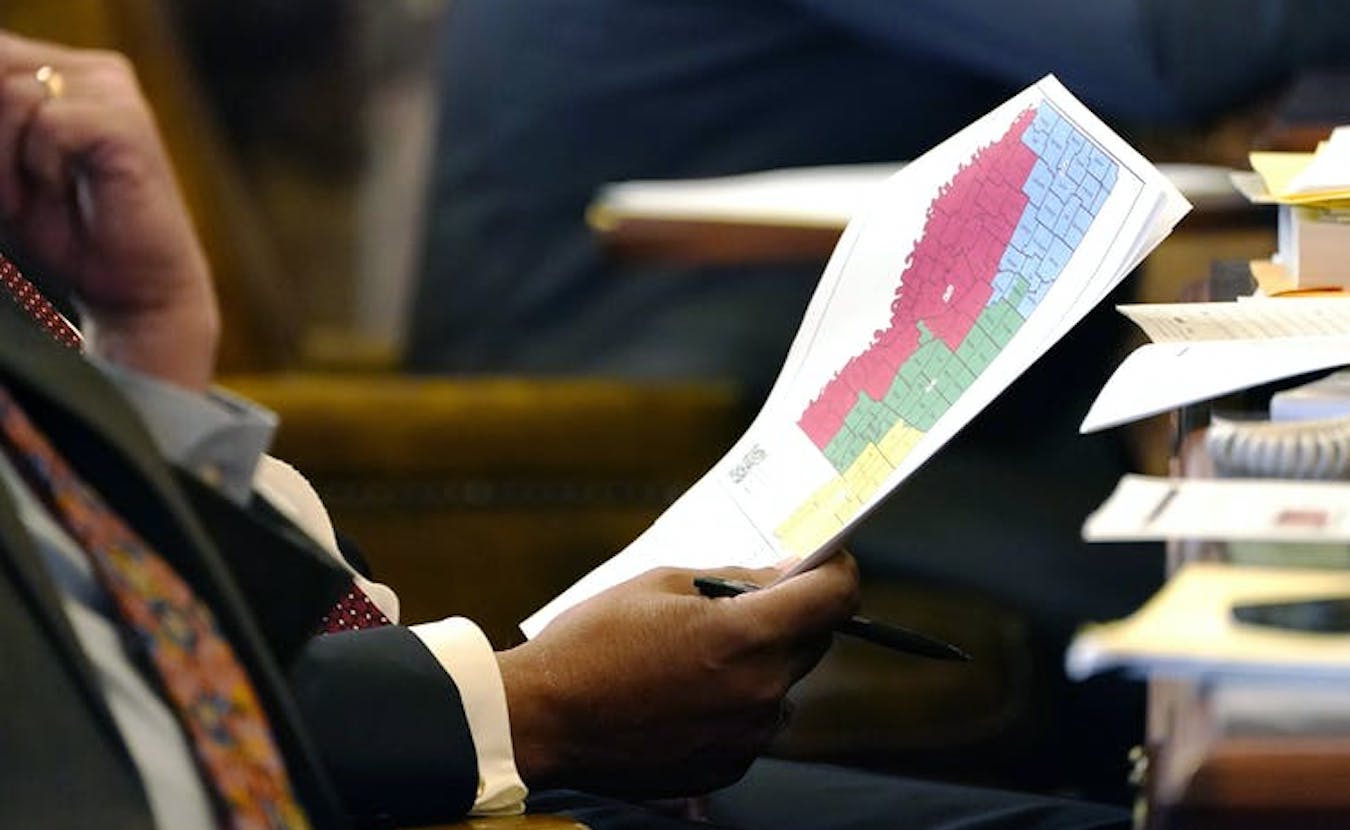 A version of this article was first published in The Conversation, an independent news organization that publishes “informative articles written by academic experts for the general public.” This article was written by Marjorie Hershey, Professor Emeritus of Political Science at Indiana University, who wrote a new introduction for Limestone Post.

Redistricting in Indiana has already been completed, governing elections for the next decade. The overwhelmingly Republican state legislative majority redrew the state’s U.S. House district map only slightly, mainly to strengthen the GOP lean of a suburban Indianapolis district (the 5th), which had become steadily more competitive during the 2010s. Although some expected the Republican majority to try to weaken Democratic strength in one of the state’s only two Democratic-held districts, that would have produced a greater risk of drawing a court challenge.

Gerrymandering undermines representative government. But it’s nothing new. The term “gerrymander” stretches all the way back to a member of the founding generation: Elbridge Gerry, who as governor of Massachusetts led the effort in the 1810s to rig the state’s legislative districts for the benefit of his fellow Republicans.

Gerry would be astounded to see the tools he’d have at his command in creating a gerrymander today. No longer do legislative line-drawers need to rely on their instincts in creating a district map that will advantage their party’s candidates. Sophisticated computer programs can maximize a party’s advantage by creating districts that can put Gerry’s famous salamander-shaped district to shame.

But the Supreme Court has required U.S. House constituencies to be equal in population. Geographic migration requires that most House districts be redrawn after each U.S. Census to keep those constituencies equal in size.

In the great majority of states, whose legislatures hold the power to redraw their legislative districts, this opens the door for the dominant party to redraw district lines to increase their dominance.

And in the latest round of redistricting, the results — so far — have furthered the anti-democratic trend where elected leaders choose their voters, undermining the very principles of representative government.

How to gain advantage

Gerrymandering is done in two ways: packing and cracking.

Packing involves putting as many voters of the opposition party as possible into one — or just a few — legislative districts. That district becomes a safe opposition-party district, won by a massive majority of opposition-party voters, far beyond the 51% majority required for victory. If all those voters were spread around other districts, they would help the opposition win those other districts’ seats. When its voters are packed into one or a few districts, then the opposition party gets a few very safe seats, but the party drawing the lines gets many more very safe seats for itself.

Cracking means dividing areas of opposition strength among several legislative districts so the opposition party is unlikely to win any of them. 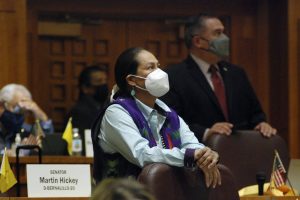 Political scientists like me can test for gerrymandering by comparing election results with a state’s “normal” partisanship. We measure “normal” partisanship by examining election results for offices that are not very visible to most voters, so their partisan loyalties usually guide their voting. Another measure of gerrymandering is to compare the total popular vote for a party’s state legislative candidates with the proportion of legislative seats that party wins.

Using either of these measures, we find that gerrymandering put a Republican thumb on the scale in state legislatures and the U.S. House in the 2010s by enabling that party to win more legislative seats and pass more bills than would have happened without gerrymandering.

If Democrats had been able to sweep the 2010 state legislative elections, they likely would have done the same.

In Indiana, for example, Republican candidates for the usually low-visibility offices of Indiana secretary of state and state treasurer received an average of 58% of the Indiana vote from 2010 through 2018, indicating that around 58% of Hoosiers normally vote Republican. But in legislative elections held after the Republican-dominated state legislature redrew district lines in 2011, Republicans won a full 71% of state House seats – and 74% in the state Senate. This clearly suggests gerrymandering.

That was true of the U.S. House as well. In Ohio’s most recent midterm election in 2018, Republican candidates for the U.S. House got 2.3 million popular votes, or 53%, compared with 2.1 million for Democrats. 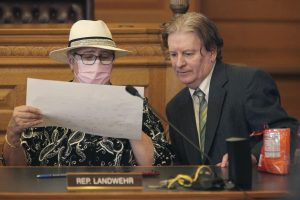 Kansas GOP State Reps. Brenda Landwehr (left) and Steve Huebert confer during a meeting of a House committee on redistricting on January 18, 2022, at the Statehouse in Topeka, Kansas. | AP Photo/John Hanna

Yet because of gerrymandering, even in a Democratic wave year, Republicans won 75% of Ohio’s U.S. House seats. Thus, Republicans were able to win a super-majority (three-quarters) of Ohio’s House delegation with only 52% of the popular vote.

The recent Republican advantage in gerrymandering isn’t the only reason for the GOP’s current structural advantage in American politics. Geographic clustering makes a difference too.

People who vote Democratic tend to be concentrated in big cities, where large minority populations live. So Democratic U.S. House candidates usually receive large majorities of the vote in urban districts: 70%, 75%, even 80%.

But that’s a wasteful majority. They need only 51% to win those seats.

If the surplus Democratic voters were to move to rural and exurban areas, they would make these areas more competitive for their party. Lifestyle preferences are not easily changed, however.

Gerrymandering distorts more than the election chances of the two parties’ candidates. It affects the policies that state legislatures and Congress pass.

Here’s what those majorities do with their power. 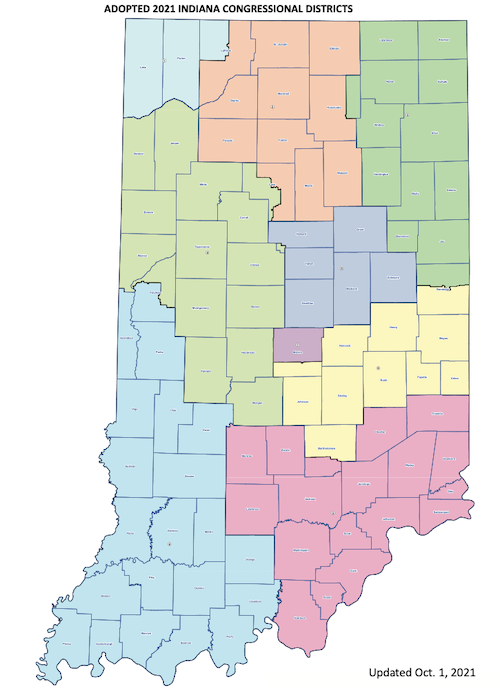 When states have heavily Republican-dominated legislatures, those legislatures are likely to pass laws sharply restricting abortion and voting rights, banning mask mandates to deal with the COVID-19 pandemic, and permitting the carrying of weapons without permits.

After the 2020 Census, the partisan effect of gerrymandering has been more limited. That’s because gerrymanders after the 2010 Census were so effective in squeezing out the maximum number of seats for their party that dominant state legislative parties are now mainly trying to fine-tune their earlier efforts.

But the 2020 gerrymanders have had another pernicious effect. The fine-tuning, intended to shore up the dominant party’s existing areas of strength, means that the number of competitive U.S. House districts has been whittled to a new low – probably less than one in every 20 House seats.

As a result, the number of districts safe for one party has skyrocketed.

In these districts, the elected representative can pay attention to only his or her own party’s activists and identifiers; the other party can be safely ignored. So the U.S. House becomes increasingly divided between undiluted right — or Trumpist — and left wings, neither with any incentive to compromise.

That may be the most consequential effect of all.

Gerrymandering thus becomes yet another way in which the institutional rules of U.S. politics — for instance, equal representation of states in the U.S. Senate regardless of population, the Senate filibuster, and the Electoral College — can limit majority rule.

[This article is republished from The Conversation under a Creative Commons license. Read the original article.]

[Note from the editor of Limestone Post: For information on the bipartisan redistricting process implemented by government officials in Monroe County and the city of Bloomington, see these articles written by veteran Bloomington journalist Steve Hinnefeld for The Indiana Citizen:

And an update on procedures being used the Indianapolis City-County Council:

Marjorie Hershey is Professor Emeritus of Political Science at Indiana University. Her research and teaching interests focus on political parties, campaigns, and elections. Her research examines the characteristics of party activists, media coverage of political campaigns, and the commonalities among lobbying, framing, persuasion, and the creation of organizational histories by advocacy groups. She has received 17 teaching awards from such wide-ranging groups as the IU College of Arts and Sciences, the IU Student Alumni Council, and The American Political Science Association. She was also the 2019 Sylvia E. Bowman teaching award winner. Marjorie is extensively involved in community service, including volunteer work with the Hoosier Hills Food Bank and the Foster Closet of Monroe County.
Tagged
Comments