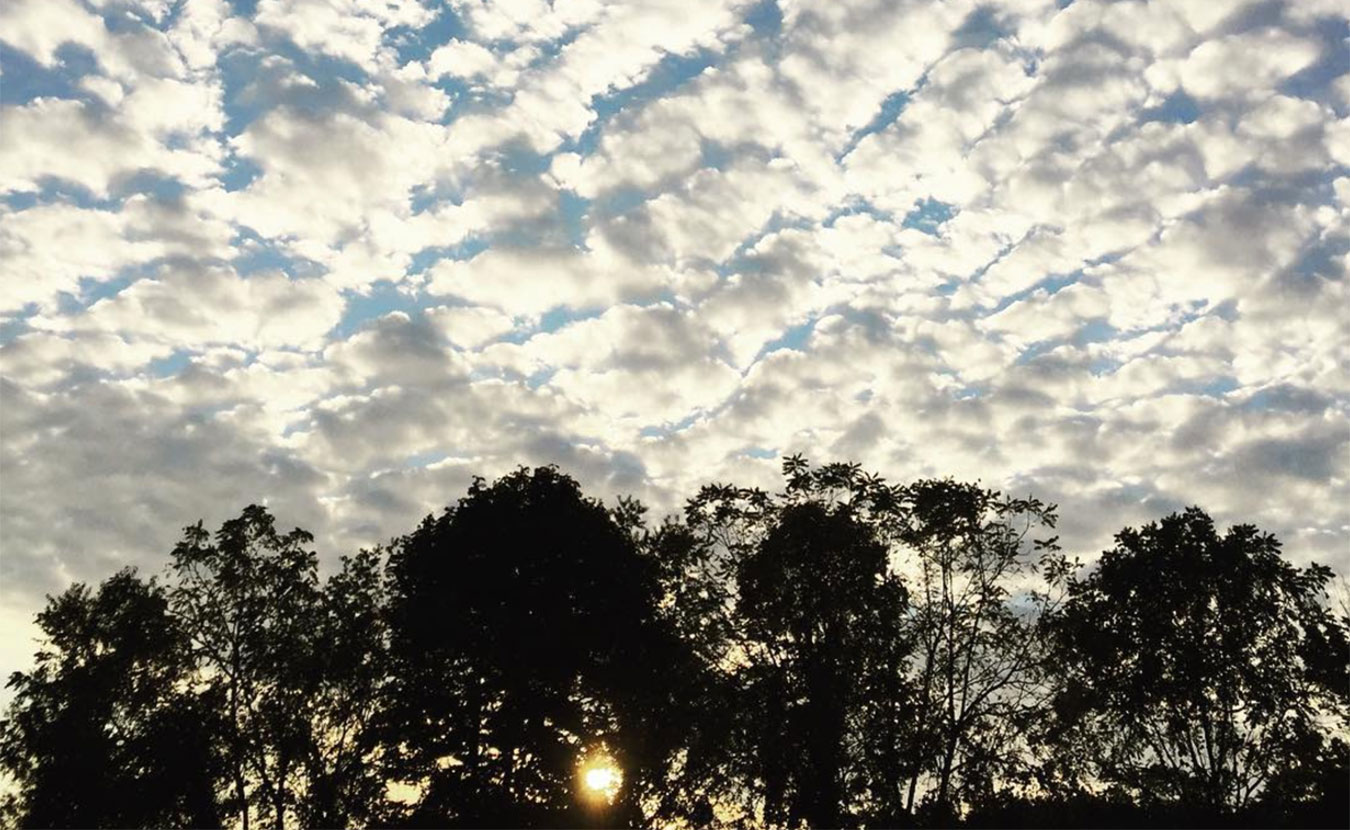 Since the 2016 election, few people concerned about climate change thought they could have meaningful discussions with climate-science deniers. But members of Citizen’s Climate Lobby (CCL) believe their efforts have even encouraged some congressional Republicans to consider a solution to the issue. | Photo by Lynae Sowinski

Guest Column: Erin Hollinden is a writer and member of the Citizens’ Climate Lobby, a national group that proposes a carbon fee and dividend policy to lower levels of CO2 in the atmosphere, which scientists say is the leading cause of climate change.

Since June, scores of people have visited the Citizens’ Climate Lobby (CCL) table at the Bloomington Community Farmers’ Market. CCL activists, including me, invite passersby to express their concerns about climate change on surveys that we will hand-deliver to Rep. Trey Hollingsworth, Republican congressman for Indiana’s 9th District. About half of the visitors scoff, doubting it will do any good. Most complete surveys anyway, as we work to dispel misconceptions that lobbying Republican legislators on the environment is futile.

CCL members also explain what we see as the best solution to lowering CO2 levels in the atmosphere, thus mitigating the effects of climate change: the carbon fee and dividend policy. This market-based proposal — involving a fee for extracting fossil fuel, paid by coal, oil, and natural gas companies — might have a chance of winning over the conservative U.S. Congress. Fees would go into a trust fund, energy costs would go up, and dividends from the trust fund would go directly to American households to help pay for not only the higher fuel prices but also the higher cost of living in general, since higher energy costs will affect more than just the prices at the pump.

A CCL-commissioned study in 2013 (conducted by Regional Economic Models, Inc., which specializes in economic forecasting and policy analysis) shows that adopting carbon fees and dividends over 20 years would reduce CO2 emissions to 52 percent below 1990 levels. Benefits would include adding 2.8 million U.S. jobs (mostly in development, production, installation, and service of low-emissions technology), improving air quality enough to prevent more than 230,000 premature deaths in the U.S., and slowing the rate at which the earth’s average temperature is increasing. And that means lessening the inevitability and severity of deadly heat waves, tropical storms, and rising sea levels.

But the specter of disaster is not what CCL is about. It’s about market forces, human connections, and optimism.

I joined CCL because, after volunteering for various organizations over three decades, I wanted to do something new and more impactful. I asked Marcia Veldman, who is the coordinator of the Bloomington Community Farmers’ Market and has volunteered with several environmental groups I’ve admired, how she thought I could best serve the environmental movement right now. She told me about CCL, which she co-coordinates at the state level, and I immediately got involved.

I found plenty of others in CCL who have been concerned about climate change for years and have searched for an organization to do something tangible, something practical, something with a chance of succeeding in the current political climate. Lee Ehman, a retired IU education professor, had never volunteered for an environmental group before the 2016 election. He now serves on CCL’s Trey Hollingsworth lobby team, organizes tabling at the Bloomington Community Farmers’ Market, and writes letters to the editor about climate change. | Limestone Post

Says Indiana University Professor of Environmental Science Jeff White: “Citizens Climate Lobby is the first group (for which I’ve volunteered) not associated with my academic home. It’s something very much outside of the world I live in professionally. After the November election, I was in despair. I thought I was doing pretty important stuff — keeping my head down, doing my science — and I realized I had to do more.”

CCL meetings are tightly structured and include calls for specific actions and new learning experiences — not just status reports and generalities. For example, the organization provides its members with a new “laser talk” each month, which instructs them on language used to promote carbon fee and dividend both to legislators and to the general public. (See below for an example.)

Success at the Front Lines

To the surprise of many, Hollingsworth, who has been criticized for avoiding and ignoring his constituents, struck CCL activists as energized and curious — a concerned father of young children, not wanting to leave them a degraded world.

Along with Durisen was White, who admits, “I went into it wanting not to like him.” But White was impressed with Hollingsworth’s passion and curiosity. It was clear the congressman wanted to better understand climate science.

In July, Hollingsworth was one of 46 Republicans who joined with Democrats to defeat an amendment to the National Defense Authorization Act that would have removed mention of climate change as a national security threat. This was a big win for CCL. Another indicator that it’s worth lobbying Republicans about climate is that the House Climate Solutions Caucus now includes 24 Democrats and 24 Republicans.

“Hollingsworth’s recent vote [against the amendment] gave me a little shiver, as if our lobbying him has actually had an impact,” remarks Lee Ehman, a retired IU education professor. Ehman had never volunteered for an environmental group before the 2016 election but “wanted to do something positive.” He now serves on CCL’s Hollingsworth lobby team, organizes tabling at the Bloomington farmers’ market, and writes letters to the editor about climate change.

CCL trains volunteer lobbyists to find common ground with members of Congress and to educate them patiently and persistently. The organization’s emphasis on citizens engaging directly with legislators and applying a friendly approach makes CCL volunteers optimistic.

“CCL’s approach to lobbying with kindness and education really appeals to me,” says CCL’s South Central Indiana Chapter co-leader Julie James. “I think it gets the job done because it’s not about attacking and pointing fingers.” James leads chapter meetings, writes letters to the editor, lobbies, gives presentations, and tables at the farmers’ market. She says she’s propelled by memories of her southern Indiana childhood — “sledding with my family, throwing snowballs, finding animals tracks” — that she’s fighting not to lose.

Her co-leader, Robert Meitus, was attracted to CCL by the simplicity of its solution and the nature of the work. “Although the economics of our organization make us sound wonky,” he says, “it is really all about people rolling up their sleeves and working on a common problem.” Meitus is an attorney and IU entertainment law professor who served as CCL’s liaison to then-Representative Todd Young and is now liaison to Senator Joe Donnelly. “How else would I have an opportunity to meet with members of Congress face-to-face many times?” he asks, adding, “That’s rewarding to me no matter what the results.”

The antidote to cynicism

Driven by her love of bird watching and concern for migratory species, Veldman has found lobbying to be the antidote to cynicism. Since receiving a recruitment phone call from CCL in 2013, she’s helped build chapters across Indiana. “There’s a level of cynicism about government and the ability of our elected officials to take on big issues,” she says. “My experience has been that when you communicate and actually get to know your members of Congress, you find they are indeed smart, engaged, and thoughtful people.” Durisen says, “My motive, as a theoretical astrophysicist, is keeping conditions on this planet conducive to human civilization. … Today we have something like 65 million refugees. In a couple of decades, there will be hundreds of millions, mostly climate-related. … When I first heard about CCL a few years ago, I was completely despondent about humans doing anything meaningful about climate change. What I liked is CCL’s solution to scale with the magnitude of the problem; plus, it seemed like it had a chance of working with a conservative Congress.” Now that he has lobbied the offices of eight members of Congress, he believes that “many Republicans do recognize climate change as a serious issue. … We are finding a palpable shift toward interest in climate action.”

Meitus believes businesspeople will understand that carbon fees and dividends will work better than regulations. “With CCL’s solution, we could make a major change in the way the U.S. economy effects climate change. Many people have said, ‘Despair is not an option.’”

Nationally, CCL has grown from 22,577 members in 2015 to 78,778 in July 2017. In 2016, it held 1,380 lobby meetings, spurred 40,046 letters to Congress, and conducted 2,306 outreach events. Seven of nine Indiana congressional districts now have CCL chapters, largely thanks to Veldman. The South Central Indiana chapter has more than 340 supporters and holds meetings on the second Tuesday of each month at 6 p.m. at the Monroe County Public Library.

Veldman also helps organize Green Drinks, the monthly happy-hour networking event with presentations on sustainability-themed topics at Upland Brewing Company. Jeff White gave June’s Green Drinks talk (recorded by WFHB’s Standing Room Only) about climate science, cheerfully lecturing the beer-drinking group about the two-degrees-centigrade tipping point and nonlinear climate feedback loops. White’s big takeaway from lobbying with CCL was hope. “We could politically turn this around within just a couple of years,” he says. “I’ve got a feeling that we’re actually closer than we think.”

[Editor’s note: The next meeting of the South Central Indiana Chapter of Citizens’ Climate Lobby will be November 14 at 6 p.m. at the Monroe County Public Library. On November 8, the national CCL is pushing the public to call and ask Congress to enact carbon fee and dividend.]