Guest Column: ‘The Antidote to Healthcare Despair Is Activism’ 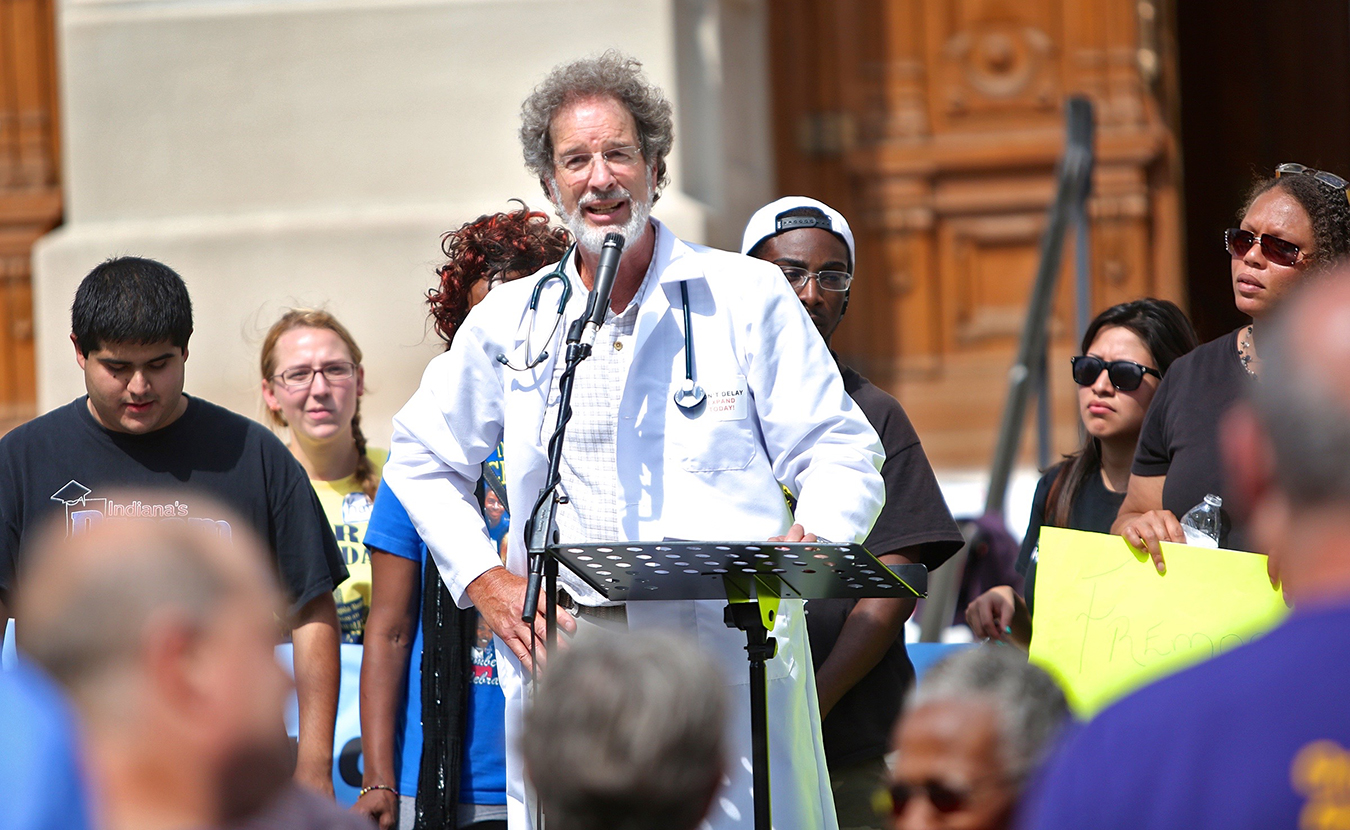 The premise of our healthcare system without the Affordable Care Act: If you can’t afford healthcare, you don’t deserve it, writes Rob Stone, a local physician, healthcare activist, and one of the founders of Hoosiers for a Commonsense Health Plan. Stone and others are fighting to protect Hoosiers from this “medical caste system.” | Courtesy photo

In sixth grade, I plastered a bumper sticker on my book bag — yellow-gold letters spelling “GOLDWATER” rampant on a field of blue. It was 1964. My father had been a Republican state senator and my early entry into political activism seemed natural enough. My inclinations shifted leftward soon, and, as a senior in high school, I was chosen to be Mayor for the Day in Evansville for Youth Appreciation Day. When I was interviewed by the daily paper, they asked what my plans were for the city. “My first official act as Mayor will be to release all political prisoners.”

It is tempting to think back about all that has changed since then — particularly in the way we pay for medical care. 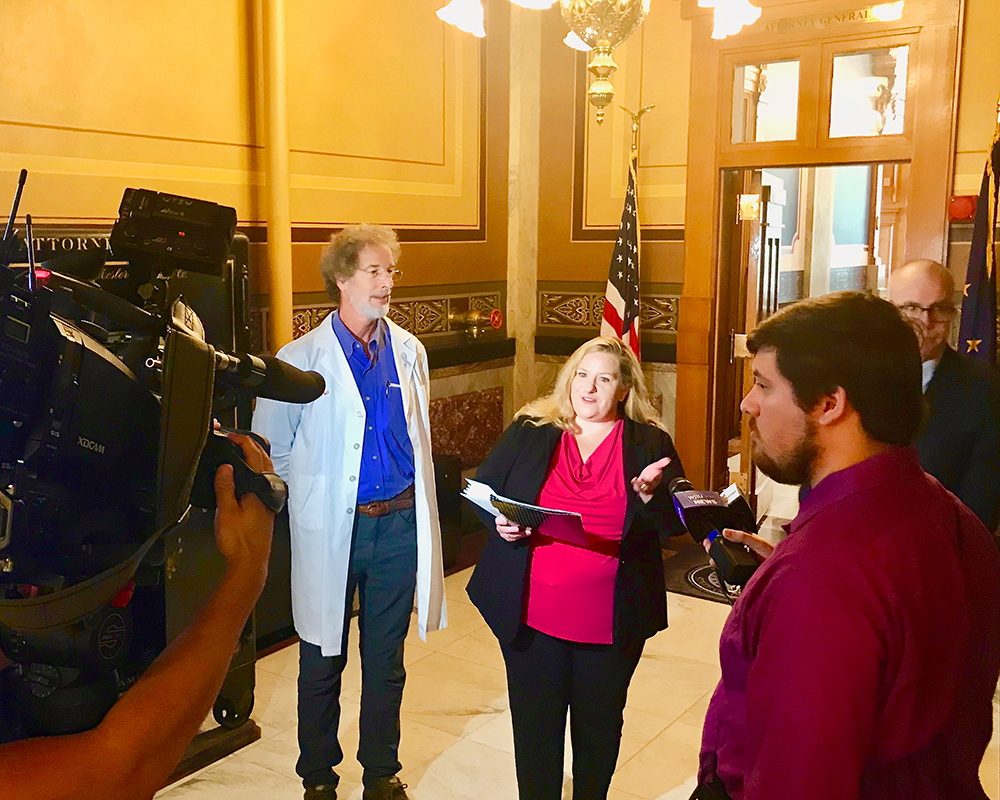 In August, Stone (left) and other members of a healthcare coalition held a press conference outside of the Indiana Attorney General’s office. In 2014, they “kept up the pressure” on then-governor Mike Pence until Medicaid was expanded. | Courtesy photo

So in 2005, with the help of folks in Bloomington and Indianapolis, I helped found Hoosiers for a Commonsense Health Plan (HCHP), which is the Indiana chapter of Physicians for a National Health Program (PNHP), to advocate for universal healthcare. Shortly after Barack Obama’s inauguration in 2009, work began on what was to become the Affordable Care Act (ACA). That same year, the Tea Party was born, and the debate was on.

The ACA passed in 2010. It took till 2012 for the Supreme Court to rule that the law was constitutional, but states could choose whether they would expand Medicaid under the act. Governor Mike Pence, along with many other red state governors, made it immediately clear that Indiana would not cooperate in any way with the dreaded Obamacare.

HCHP joined a statewide coalition of around 40 groups, including churches, labor unions, and advocacy organizations, building a grassroots campaign to pressure the governor. By February 2014, we had gathered 10,000 signatures online and on paper, statements from religious leaders from rabbis to imams to bishops, and city and county council resolutions across the state from New Albany to Gary, calling for Medicaid expansion.

We delivered all those documents to the Statehouse. I was wearing my white coat and cameras were running as we stepped into the governor’s office. His staff claimed he was gone, out of town, although he met with a group of Boy Scouts in his office later that day. Along with our partners, we kept up the pressure, and, a year later, Medicaid was expanded, now called The Healthy Indiana Plan or HIP 2.0.

No one predicted that the Affordable Care Act would still be standing two years into Donald Trump’s presidency. It has been bloodied and weakened, but Congress has not been able to repeal it and it is more popular than ever.

Another threat looms — the courts. This past February, 20 state attorneys general met in Washington, D.C., to announce the filing of a lawsuit in federal court to invalidate the last remnants of the ACA, with specific aim taken at the protections in the ACA for people with pre-existing conditions. Indiana Attorney General Curtis Hill Jr. was one of the attorneys general present. He made a speech at the conservative Heritage Foundation, crowing, “The whole house of the Affordable Care Act must come crumbling down.”

It was a story easy to miss last February, but the top blew off in June when U.S. Attorney General Jeff Sessions announced that the Justice Department was breaking with tradition and would not defend this challenge to the ACA in court this September. In other words, the Justice Department and Indiana’s attorney general want to take healthcare coverage away from Hoosiers. About 200,000 get ACA coverage through the healthcare exchange. And more than 400,000 are covered by HIP 2.0. One to two million Hoosiers have pre-existing conditions and are at risk for being denied health insurance or charged vastly higher premiums. These people, and Hoosiers covered by the Medicaid expansion, would be the first to lose their coverage. 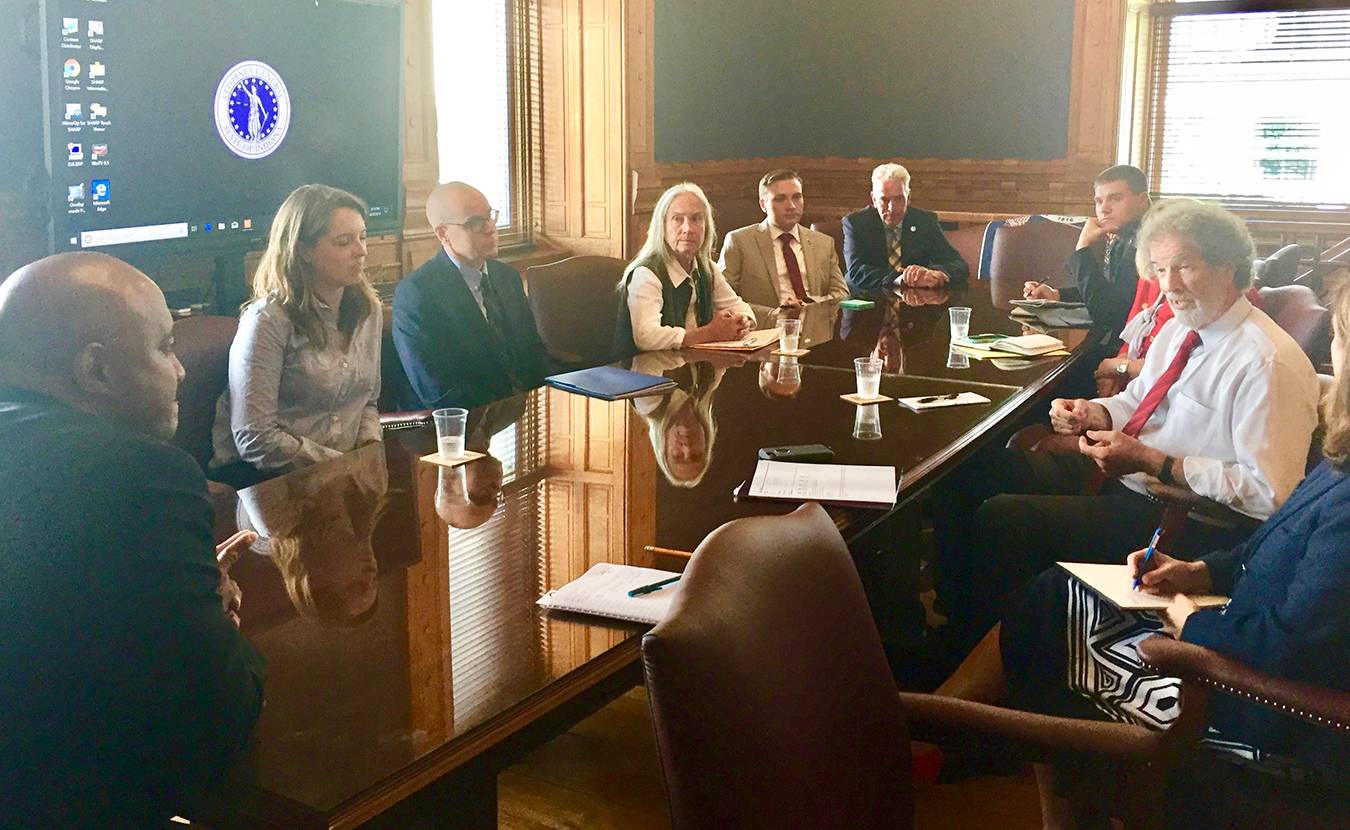 Stone, right, and a number of other healthcare activists met with Indiana Attorney General Curtis Hill Jr., left, in August to discuss the protection of the Affordable Care Act and The Healthy Indiana Plan. | Courtesy photo

It’s hard to remember that just a few years ago, before the ACA, if an insurance company determined that you had ever been sick — ever diagnosed with high blood pressure, cancer, diabetes, you name it — they could deny you health insurance coverage. How absurd! Who is deserving of medical care? Anyone who is sick. Anyone who may get sick. In other words, everyone deserves medical care.

What I am describing here is a “medical caste system.” The uninsured are the Untouchables. Different from calling it a “medical care system.” The obvious next step is to look and see how to change the premise of the system. That premise remains: If you can’t afford it, you don’t deserve healthcare.

Activists are working to keep the health of Hoosiers in the spotlight. According to the attorney general’s website, the Indiana attorney general helps “to protect the rights, freedoms, and safety you enjoy as a citizen of the Hoosier state.” There is no way to interpret that duty as including the taking away of healthcare from thousands if not millions in our state.

Now the story has gotten more complicated because Hill has been accused of sexually inappropriate behavior. What becomes of the lawsuit now is hard to say — Governor Eric Holcomb and legislative leaders of both parties have called for Hill’s resignation. And while he is not expected to face criminal charges, he could still be removed from office.

On August 22, Hill met with a group of us in his office in the Statehouse. During the 60-minute meeting, the tone was cordial, but Hill was unmoved by our pleas to protect the ACA and HIP. He kept falling back on his belief that the ACA is unconstitutional and his duty to protect the Constitution. Finally, I asked him, “What do you say to the 600,000-plus Hoosiers who are afraid they will lose their health insurance if your suit is successful?” He said, “I don’t have an answer to that question.”

Back in 1964, Barry Goldwater suffered one of the worst political thrashings in modern American electoral history, and still, only four presidential elections later, Ronald Reagan was elected president and the modern conservative movement established. It’s hard to predict the future. But that doesn’t make the future any less frightening.

The antidote to despair is activism.

Activism is collective action. Working together, not alone. Here, I have told my story, but it really is our story. We have worked together with so many amazing Hoosiers. In this bright red state, we have built a movement for healthcare justice. There are so many more stories to tell. Edith in Fort Wayne whose daughter has a terrible pre-existing condition. John the city councilman in New Albany who got the first Indiana Medicaid expansion resolution passed. Curtis the Baptist minister in Gary whose church in the inner city has created not a community garden but an urban farm to feed people.

Everyone has a story to tell about healthcare. Let yours be heard. We deserve better than what we have now. The craziness in the daily news can wear us down, but things change when the people rise up. There is change in the air. Midterm elections are coming soon. Healthcare, racial justice, a living wage, the environment — pick your issue. I don’t know what the tipping point is going to be, but I know it is coming.

Indiana is full of amazing people. Find them, join them, work together. You will feel better. Trust me. I’m a doctor.

Rob Stone is a grandfather, gardener, and doctor. He lives in the woods north of Bloomington with his wife, Karen Green Stone. Born and raised in Evansville, Indiana, he graduated from Dartmouth College and the University of Colorado Medical School. He has long been a passionate advocate for universal health care and is the director of Hoosiers for a Commonsense Health Plan and on the Board of Advisors for Physicians for a National Health Program. He used to do his doctoring in the ER in Bloomington but since 2011 has practiced hospice and palliative care.
Tagged
Comments