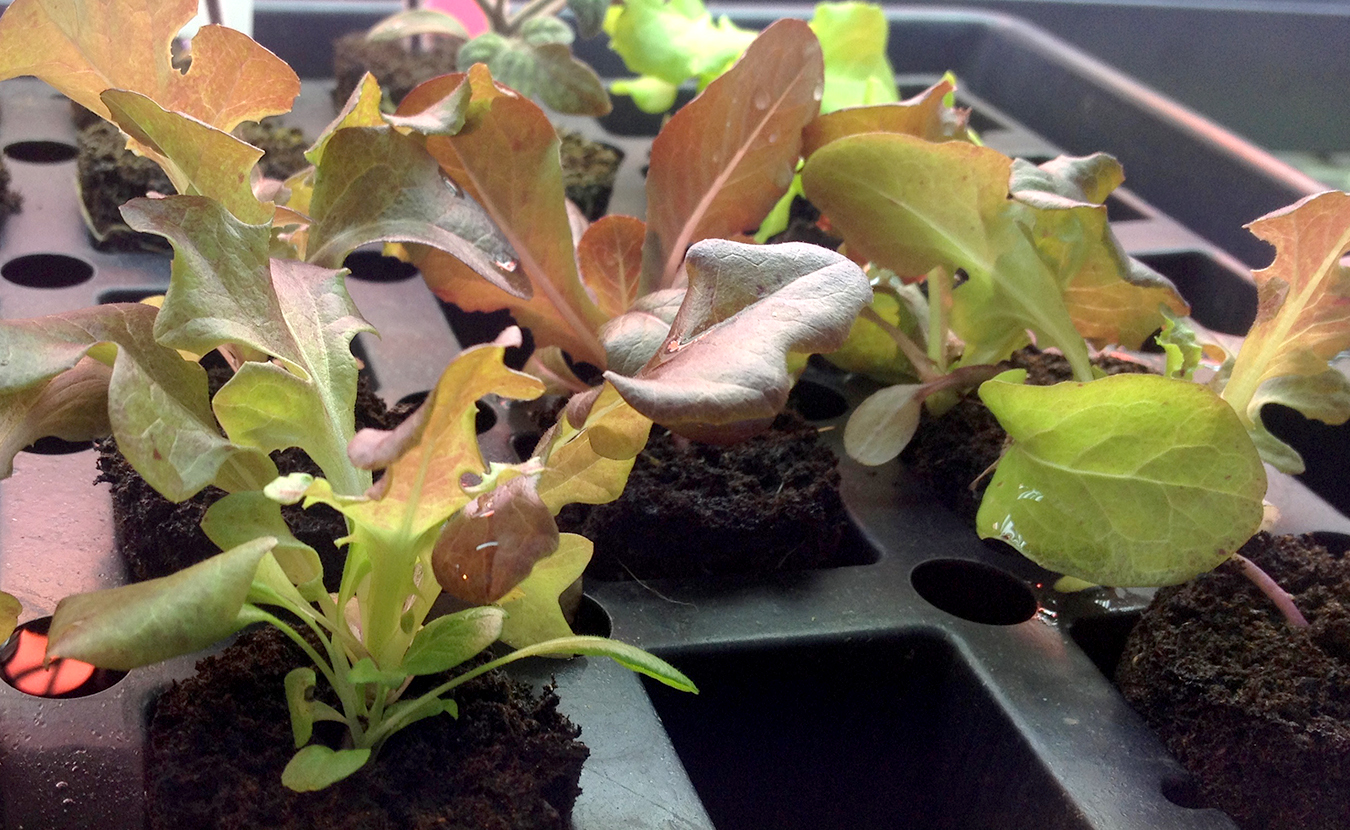 It wasn’t always pretty, but long before I had any land of my own, I always found a way to garden. My windowsills were perennially crammed with basil and beets, and, year after year, I packed hundreds of pounds of compost, potting soil, and pots onto the balconies and patios of innumerable, sketchy apartments.

Winter never stopped me, either. And if you’re jonesing for something just-picked, the season’s oatmeal skies and bone-chilling cold need not stop you! Turns out, there are a few simple ways to grow your own fresh greens, and these methods require little in the way of space, expertise, or equipment.

Perhaps best of all, the resulting produce packs a nutritional punch you’re unlikely to get from the grocery store. That’s because nutrients in “fresh” fruits and veggies naturally begin to degrade immediately upon harvest. Dark, leafy greens are especially vulnerable.

For instance, spinach stored at 68°F has been shown to lose 80 percent of its ascorbic acid — a powerful antioxidant and component of vitamin C — within the first 50 hours after harvest. In a separate study, researchers noted that spinach refrigerated at just under 40°F for one week retained only 25 percent of its ascorbic acid. (Researchers have been geeking out on this stuff since the 1970s.)

And what about all of those washed-and-ready-to-eat, prepackaged (also called MAP-stored) salad mixes? A comparison of the antioxidant capacity of fresh lettuce versus MAP-stored lettuce revealed there’s simply no contest. People who ate fresh lettuce had elevated levels of total radical-trapping antioxidant potential (TRAP) in their blood. On the other hand, eating lettuce that had been MAP-stored for just three days provided no such benefit. Brackney says growing sprouts in a jar is one of the quickest routes to fresh food. | Photo by Tlcoles. Licensed under CC BY-SA 3.0 via Wikimedia Commons

The basic sprouting steps include presoaking your seeds in warm water for 8 to 12 hours, rinsing the presoaked seeds well, and then making sure they have a good balance of air circulation and moisture. The length of time from seed to finished product will vary, depending on the type of seeds or beans you’re sprouting. (You’ll find detailed sprouting instructions here for scores of different kinds.)

Like sprouts, shoots and microgreens are harvested and eaten early in their young lives, but, unlike sprouts, they are grown in a shallow container of soil. Peas, sunflower seeds, and even popcorn make great shoots, and spinach, kale, beets, and broccoli are easy-to-grow microgreens to try.

Let there be light!

If you prefer your greens fully grown, you’re going to need a fair amount of direct sunlight. Unless you’re lucky enough to have your own greenhouse or maybe a sunroom with terrific southern exposure, that means you’re going to need supplemental lighting. Fortunately, you’re much less likely to find yourself in $64 tomato territory (as best-selling author William Alexander experienced), thanks to recent advances in lighting technology.

Over the past several years, indoor garden lighting has become more affordable, effective, and energy-efficient, according to Roger Emmick, Indiana consumer operations manager at Worm’s Way Hydroponics & Organics. “Twenty years ago, indoor gardening pretty much consisted of T12 shop lights, which was your cheap end, and high-intensity discharge (HID) lighting … on the high end,” he says.

Those old-school fluorescents were serviceable enough for getting a jump on the outdoor growing season, but if you wanted to grow plants all the way to maturity indoors, you had to spring for very powerful HIDs instead. “It’s similar to the lighting that you see in parking lots,” Emmick explains. “If you were running a 1,000-watt [HID] bulb, which covers a 5-by-5-foot area, [you were] looking at increasing your power consumption by about $40 to $50 a month for that one light.”

But indoor gardeners have more options now. There are light-emitting diode (LED) fixtures, which require much less energy than traditional HID lights. And particularly well suited for maintaining compact, “cut-and-come-again” plantings, there are the newer T8 and T5 fluorescents, (roughly $5 and $10 per bulb, respectively, and roughly $20 for the fixture). The “T” in T12, T8, and T5 refers to the “tubular” bulb shape, and each number indicates bulb diameter in 1/8 of an inch: T8 bulbs are 1 inch in diameter, while T5s are just 5/8 of an inch around. “With the T5 being a smaller-diameter bulb, the gas inside that bulb is under a lot more pressure, so you get a much more intense light than you would with a traditional T12 or T8,” Emmick says.

You’ll also see a smaller electric bill than even just a few years ago. A single 24-watt T5 strip light can easily support a standard 22-by-11-inch flat (or container) of spinach, kale, baby beets, or other mixed greens. To maximize how quickly your plants grow, Emmick recommends a cycle of “lights on” for 18 hours, followed by six hours of darkness. “And at 24 to 40 watts for one of those strip lights, it’s not going to be any different than having a house light on,” he adds. “I wouldn’t expect that to raise [your] light bill any more than five dollars a month.” [See the box below to estimate the cost of operating an indoor garden light at your home.]

Initially, you won’t need to use the supplemental lighting until your seeds have sprouted. Along with moisture, in most cases, it’s heat — not light — that triggers germination. Just keep in mind that seeds may be slow to sprout if your indoor temps fall below 65°F. Once your seedlings are up, Emmick says, “You really need those lights pretty much on center with the flat that you’re lighting.” You can ensure compact, healthy growth by keeping the light positioned within 8 to 12 inches above the plant canopy at all times.

Here’s to a little extra color in your cheeks — and on your plate. Bon appétit!

Want a better idea about how much operating an indoor garden light might cost you?

Next, multiply 0.432 by your average cost per kilowatt hour. This yields your daily cost of operation for the one 24-watt bulb. Finally, multiply the daily cost by 30 to get your estimated monthly cost.

If, for example, you pay an average of 14 cents per kilowatt hour, that math would work out like so: