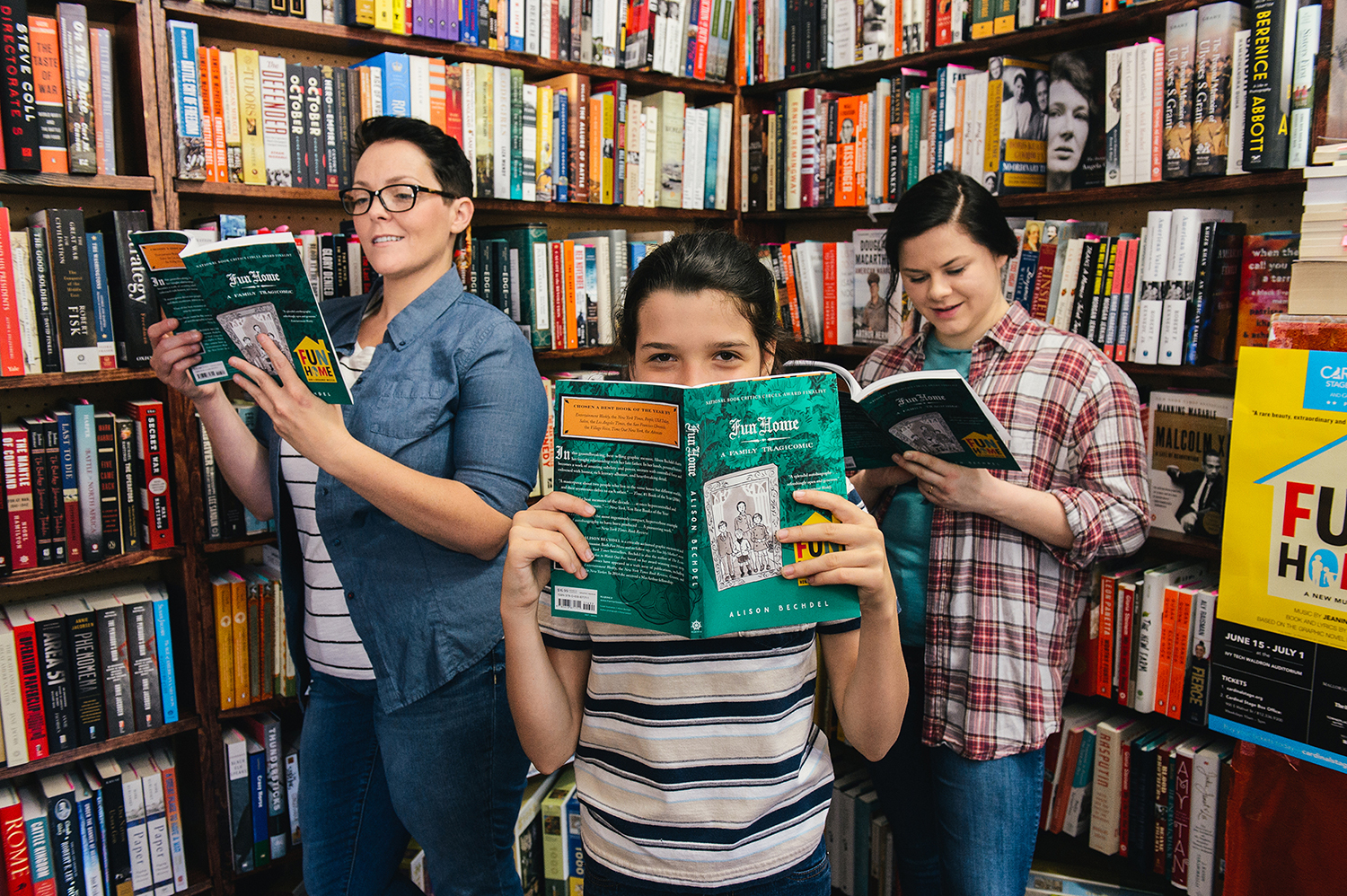 Cardinal Stage has partnered with several local bookstores and is hosting a ‘Fun Home’ book club prior to the June 20 performance. | Photo courtesy of Blueline

Every author inserts a bit of him or herself into their work, but with the newest production by Cardinal Stage, we get a story that is completely Alison Bechdel. The musical Fun Home is the coming-of-age story of Bechdel, her coming out as a lesbian, and her relationship with her repressed gay father. The musical shows snippets of Bechdel’s life as a child growing up with a loving but also volatile dad who is hiding his own sexuality while also restoring a historic house and running the family funeral home (which Bechdel and her siblings call “fun home”). Other snippets show Bechdel as a college student discovering her sexuality and her father’s secrets, and his actions after that pivotal time. It’s dramatic and painful, and witty and funny all at once. “There are definitely comedic moments in Fun Home, and sometimes they come out of the most dramatic moments. We use humor as a coping mechanism, and that is built into the structure of the show,” says Kate Galvin, Artistic Director at Cardinal Stage. 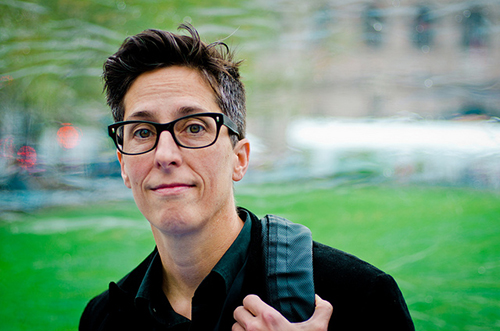 Alison Bechdel is the author of ‘Fun Home’ and the comic strip ‘Dykes to Watch Out For’ and is also the creator of the Bechdel Test. | Photo by Chase Elliott Clark

This is Alison Bechdel’s story, based on her memoir, a graphic novel of the same name. In many ways, it’s a traditional coming-of-age story where the young person is discovering herself and battling with parents who are loving but fallible. In the details, however, it’s a unique story in which the main character lives in a funeral home with her closeted father and tolerant mother. “It’s about a very specific family, under very specific circumstances, but the universal aspects of their family dynamics are highlighted, as is Alison’s coming-of-age experience,” says Galvin. “And there are some more challenging events that also will ring true for audience members — tough conversations you start to have when you make the transition from the child/adult dynamic to the adult/adult dynamic.”

Since the musical is based on a novel, Cardinal decided to engage audiences further with a book club. They partnered with Book Corner, Friends of Art Bookshop, and Vintage Phoenix Comic Books to stock copies of the novel, with some stores offering a discount. Readers can then join in a public discussion about the book on June 20, prior to that evening’s performance, and led by Jean Robinson, a Cardinal board member and retired professor who was the first director of the Indiana University Women’s Studies program. “Although the musical is derived from the book, the two don’t share the same text nor format, so there are bound to be differences between the graphic memoir and what we’ll see on stage,” says Robinson. The book club discussion will offer another way to explore the book and the musical. Adds Galvin, “Seeing how Jeanine Tesori and Lisa Kron have adapted this graphic memoir, which is completely non-linear, into a musical is fascinating. Writing musicals is so challenging and these two women have done an astounding job.” 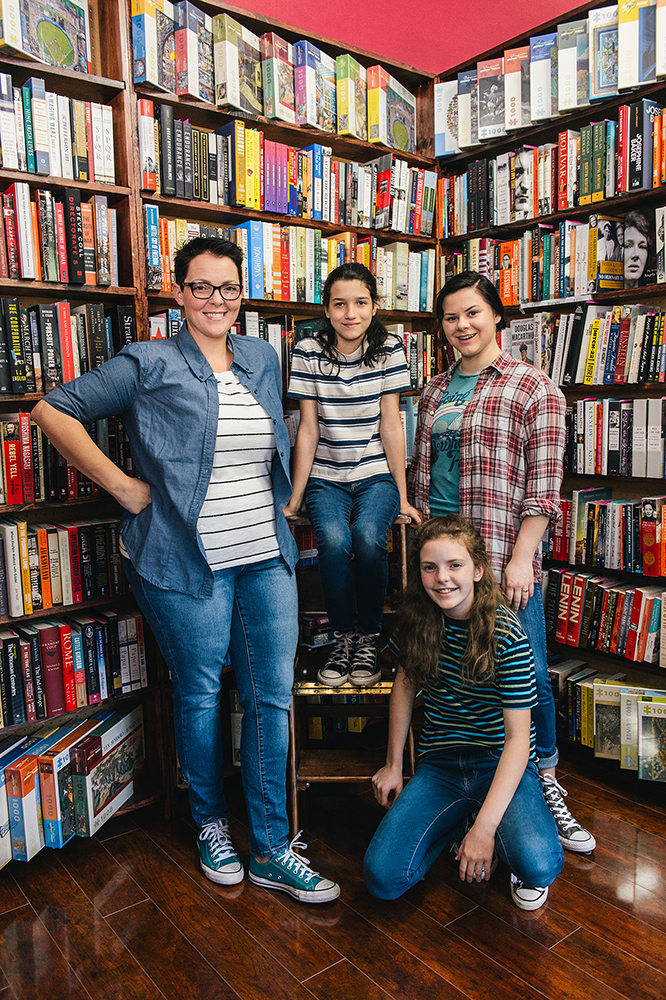 Many times, book clubs are composed of friends or neighbors who feel comfortable voicing opinions during discussions. Since the Cardinal book club for Fun Home is a public discussion, some people might feel nervous about discussing such weighty topics as sexuality, social rejection, family dynamics, and suicide. Robinson notes, “I hope that people will feel free to voice their opinions, and I will be sure to keep the atmosphere fun and inclusive.” Readers should come with thoughts on what they liked and did not like, which characters held the most meaning for them, and things they would like more clarity on. “There won’t be a test,” Robinson says, “and no one will be put on the spot to give their opinion!”

Bechdel’s Fun Home provides a glimpse into her life at several pivotal moments, but it does not cover her entire life or work. She created a long-running comic strip, Dykes to Watch Out For, in 1983, which centered on a lesbian character named Mo and her friends. Besides Fun Home, she’s also written a second graphic memoir, called Are You My Mother?, which focuses on her relationship with her mother. She is also the creator of the Bechdel Test, which tests movies on three factors: 1. It must have at least two named women in it; 2. The women talk to each other; and 3. They talk about something besides a man. Bechdel first featured this test in a Dykes to Watch Out For strip in 1985. The test has become well-known, but, amazingly, films still fail to pass the test. The website bechdeltest.com has evaluated over 7,700 films; of the 27 tested so far this year, there were eight films that did not pass. But it’s because of Bechdel that we even have this measure of gender inequality in films. In a number of ways, she is calling attention to social issues that should be important to us all.

With the Supreme Court recently ruling in favor of a cake baker who refused service to a gay couple because of his personal religious beliefs, many in the LGBTQ+ community continue to feel oppressed. It seems especially important for Cardinal to produce Fun Home at this time. Robinson notes, “Children and adults, in families and in society, are imagining ways of living that fit their own desires and identities, but these don’t always fit the typical social norms.” The show highlights the touchingly normal and tragic moments in the life of a lesbian and her family, and the unique struggles they faced. “I think there are a lot of forces at work in our culture that divide us, and this show is a work of art that cultivates empathy in the most beautiful and moving way,” says Galvin. “It allows us to step into someone else’s shoes and better understand their circumstances and experiences, and it does so in a way that is really engaging.”