From Wild Fowl to Feathered Friends, Chickens Have a Rich History with Humans 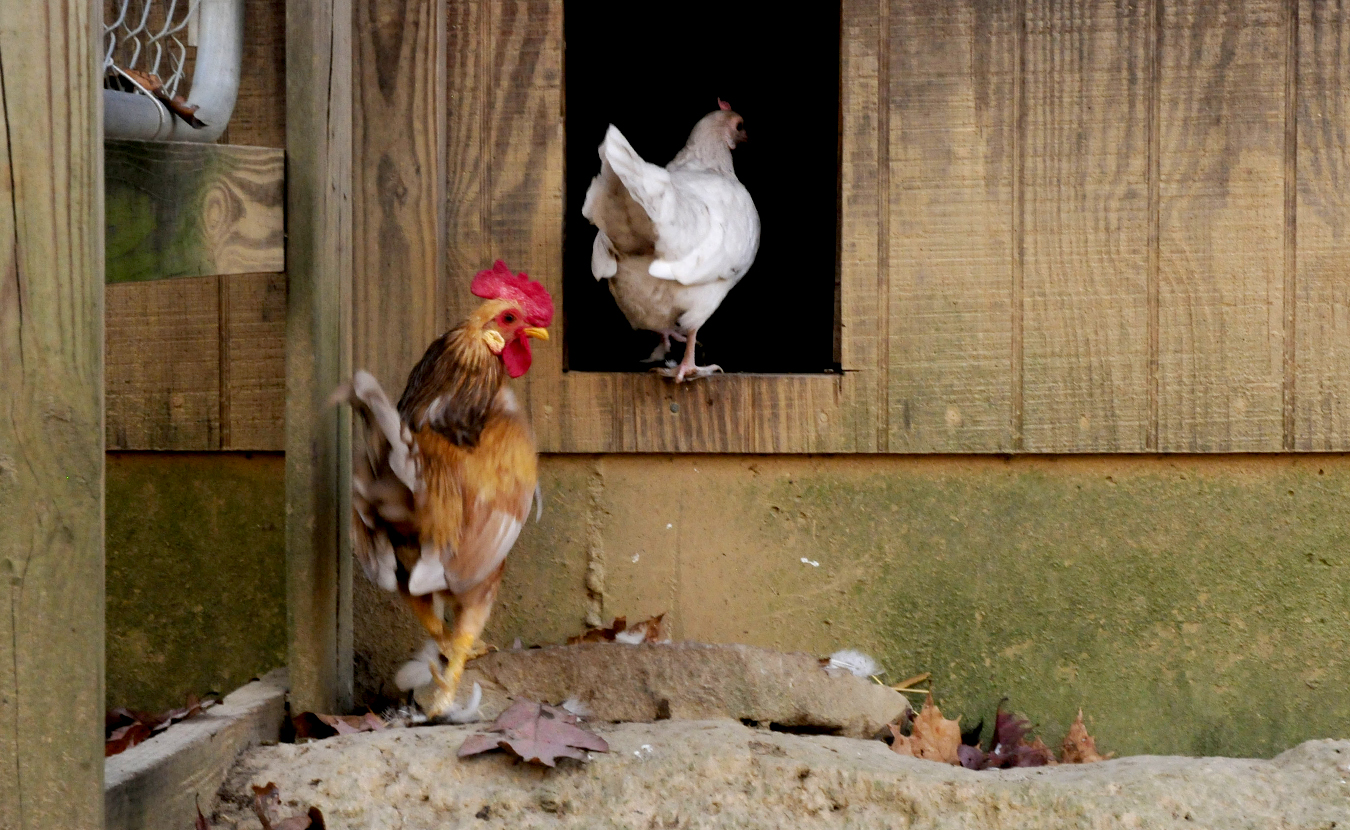 A decade ago, John built a coop in Brown County and moved his city chickens to the country. Since then, local chicken keepers won their right to raise backyard chickens within Bloomington city limits. | Photo by Ann Georgescu

They were known as “the gang of seven,” a wily bunch of outlaws with nothing better to do than jump fences and stir things up in the neighborhood. They had no idea what kind of trouble they were causing with their appetite for adventure. But they were causing trouble — oh, yes, they were.

One neighbor filed a complaint to City Hall after one too many visits from the little hooligans. Chickens, the neighbor claimed, do not belong within the Bloomington city limits.

News of the complaint traveled fast and roused other city chicken keepers to the gang’s defense. Devotees rallied to fight the city. Bureaucrats and politicians were divided, and one council member arrived, full-feathered, in a chicken suit. The gang’s owner, John, and his flock made headlines in The Herald-Times and the gang landed themselves a place in local history.

Before things got ugly, John built a coop on his property in Brown County to house the rambunctious group as well as the rest of his chickens. In total, there were 22 hens and three roosters.

“I knew we were going to get kicked out,” John says. “They wouldn’t come when I called them, and when I went over to get them, they just ran in every direction. This happened every day for a while.” After much debate, Bloomington chicken keepers won their right to raise backyard chickens.

That was nearly a decade ago, and the number of backyard chicken coops has been rising ever since. In July, The Herald-Times reported that there were 49 active chicken permits within city limits. Our relationship with chickens is “an epic tale of success and survival.” | Limestone Post

If you are interested in starting a flock, early preparation is the key to happy, healthy chickens. John recommends raising baby chicks in a brooder, which is a warm, secure space with enough room for them to grow. The brooder floor should be lined with newspaper and then covered with pine shavings; a heat lamp should be attached to a ventilated covering. Good-quality chick-starter feed should be provided as well as plenty of water.

Baby chicks can be mail ordered from hatcheries or purchased locally at farming supply stores, such as Rural King and Tractor Supply. Hatcheries offer a long list of exotic breeds that can be mixed and matched. Because they often have a minimum shipment of 25 chicks per order, hatcheries are better suited for rural flocks or for those wishing to share an order with other backyard farmers.

Hens mature to egg-laying age in six months, so, if a new chicken keeper starts now, it is possible to have fresh eggs by June. There are ample websites and blogs with detailed instructions offering tried-and-true advice, and it is advised to read up before purchasing your chicks. The City of Bloomington Parks and Recreation Department has classes on how to get started. Registration for their next class closes on February 25.

Humans first discovered chickens about 10,000 years ago. Scientists believe that early domestication was less likely for food than for cockfighting and divination. According to one legend, Greek soldiers, on their way to fight the Persians, stopped to watch two male chickens fighting by the side of the road and found the birds’ aggressive instinct inspirational while battling the Persian forces. Soon after, cockfighting spread throughout Europe and Asia and became one of the first spectator sports. The Romans also revered them for their killer instincts and used them as oracles to tell fortunes, especially during battle. Cultures in places that are now India, Sri Lanka, and Myanmar used the bones for divination. They poked, prodded, and pulled, checking for holes in the thighbones to determine good luck or bad luck.

Chickens’ ancestors, jungle fowl, still inhabit the forests of India and South East Asia. They can be found hiding deep in the scrub or darting about scratching the ground for seeds, grains, and invertebrates. They fly up to 200 feet and roost high in trees with their heads buried under their wings.

Female jungle fowl prefer to mate with the loudest male with the largest comb while males prefer the females they know best. They announce sunrise and sunset with loud alarm calls and protest wildly when disturbed. There are plenty of predators in the jungle, but the wild fowl has survived and roamed the forests for millions of years. And, rumor has it, they taste good.

Over time, chickens migrated from Asia under the arms of their captors to every edge and corner of the world. Along the way, the Egyptians perfected incubation and the Romans perfected chicken cuisine, before, some believe, the birds landed in the Americas on board Polynesian boats.

So cunning, so elusive, so tenacious — our tangled relationship with chickens seems more about us than them. Relocating his chickens to the Brown County countryside is a testament to John’s commitment. “I’ve had chickens for years; my grandparents had them, and my aunts and uncles had them,” John says. “It’s possible to develop an affection for them. They have distinct voices and develop their own vocabulary. When I go into the hen house, I can tell them apart (by their voices alone).”

For the past decade, John’s flock has lived in their forest hideaway. Now in their golden years, the gang and their friends have settled down. They lay fewer eggs, have stayed out of trouble, and prefer the country to the bustle of the city.

But the flock is still wild at heart. They run around kicking up dust and leaves with razor sharp feet and peck at the ground with powerful beaks. They hide from hawks, strangers, and shadows. They are prone to fights and are emotionally bound to their mates.

At feeding time, John greets his flock with affection, calling them his “sweeties,” “babies,” or “darlings.” Today there are ten hens and two roosters — coyotes or hawks have taken the rest. All except for Pretty Boy, whose partner Sweetheart was captured by predators. “Three days later,” John says, “Pretty Boy died of a broken heart.”

John’s advice to would-be chicken owners is that it takes work and commitment. “One should enter into the relationship with care and caution,” he says. “Moving them around and putting them together with other flocks can be dangerous. They would automatically fall to the bottom of the pecking order — and for older birds, it could be a deadly experience.” John has made sacrifices for his chickens, but he would not change a thing.

The globetrotting chicken has crossed many cultural and political boundaries with ease. Across mountains and oceans to barnyards and backyards, it is an epic tale of success and survival. The wild fowl and its extended family of chickens have entwined their tribe with our own, teaching us where chickens came from and where we came from, too.