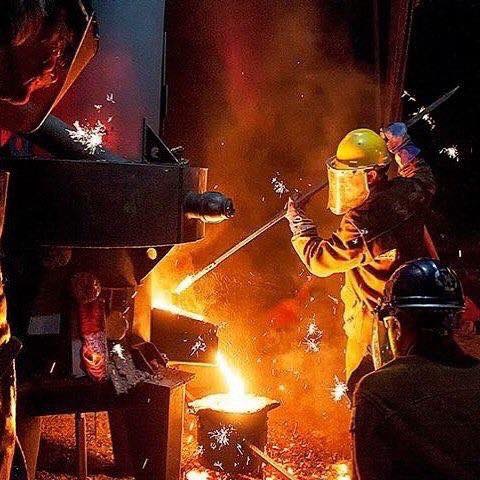 In July, Sculpture Trails Outdoor Museum holds its annual series of workshops and public events in Greene County, capped by the [email protected] Iron Pour on July 27. (above, in yellow hardhat) Sculpture Trails founder Gerry Masse works one of the furnaces. | Courtesy photo

Gerry Masse, founder of Solsberry’s Sculpture Trails Outdoor Museum, asked his dad, Gerard Masse Sr., if he could borrow the barn for a month. The elder Masse owns the building, which is on their Greene County farm in Solsberry. Gerry wanted to build a furnace and offer cast iron, aluminum, and bronze workshops for professional sculptors and student interns. The museum already had dozens of metal sculptures spread over a few miles of trails on the heavily wooded property, and some of the sculptors could exhibit their work at the museum as a result.

“Just a month?” his dad asked. “Sure, we’ll just pull the tractors out and put a tarp over them.” That was in 2009, and the first workshop started in 2010. This marks the tenth year for the workshops. Recently, Gerard Sr. wryly asked his son, “I’m not getting my barn back, am I?”

The July workshops coincide with two public events at Sculpture Trails, an aluminum pour on Saturday, July 13, and [email protected] on July 27 (see more details below), with a big cast iron furnace tap at 9 p.m. that lights up the night sky. At both events, attendees can watch sculptures being designed and learn more about the art, as well as make a small piece of cast art themselves by scratching a design into a packed sand mold ($20 to $30 each). These events, plus the workshops, make Sculpture Trails a unique opportunity among the 150 or so sculpture gardens and parks across the U.S., because the public can not only watch a furnace at work, they can see artists working at every level of sculpture creation and make their own aluminum sculpture. It’s also an opportunity for both professional and academic artists to work with students in a community of artists.

While Sculpture Trails was founded in 2002, Masse got the idea for workshops after his mentor, artist Jack Gron, asked him to join some friends and help build a foundry in Coalbrookdale, England, at the 10-acre Open-Air Museum of Steel Sculpture in the early 2000s. In 2009, the artist/owner of that park, Pam Brown, wanted to retire, so Masse helped organize a move to Solsberry, beginning with building a furnace.

“She taught us a lesson that art school did not,” Masse says. “To give back. We wanted a place where we could run the workshops for a whole entire month and share our passions for casting iron. And at the same time, we wanted to give back the work that we were making.” The giving back is an ongoing exhibition of selected juried work produced at the workshop where five to ten pieces of new work are installed for two years and the same number of pieces taken out. It’s part of 150 sculptures placed along three miles of trail over 50 acres. The outdoor museum is open year-round from 10 a.m. to 5 p.m. and two resident artists offer guided tours for $3 per person. 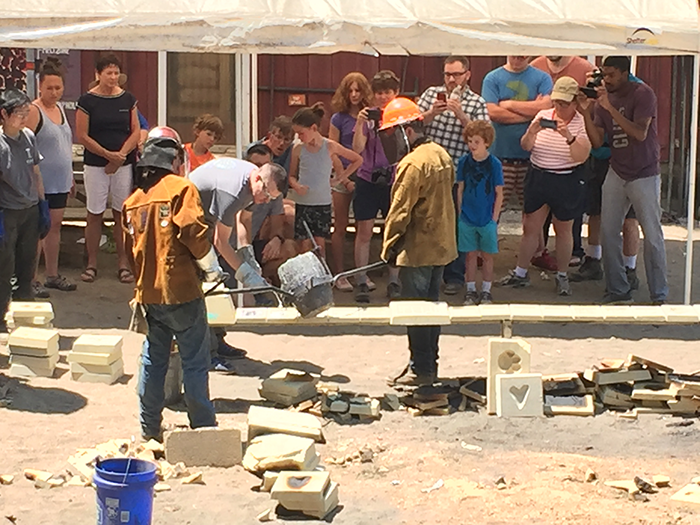 Visitors watch as aluminum is poured from a crucible into sand scratch blocks. | Photo by Laurie D. Borman

Locals may wonder why anyone would operate a furnace over 2,500°F in the height of summer. But July is when students are not in college and can provide intern labor and academic artists are not teaching or attending gallery openings. It fits well for most of the participants in the workshops.

Ariana Berman, a senior at the University of Wisconsin, plans to spend her third July in Solsberry as one of 15 student interns. The heat does not deter her. “It does get grueling because you’re outside in the middle of the woods doing very labor-intensive work,” she admits. “But your work is well rewarded. You’re part of a community. You’re also helping your peers and your mentors accomplish their goals and their dreams in life. And part of that is doing their sculptures.” This year Berman will be installing her own artwork at the museum.

“I won’t lie: It is crazy hard work,” she says. “But what makes it so easy is that you have so many people to help you. I rarely have a task that I have to do alone. Usually there are four or five people who are like, ‘Can I help you?’”

The community effort makes the workshop effective, beginning at 9 every morning, when participants wield two-pound hammers, breaking up the month’s 40,000 pounds of metal. That’s about the same weight as six Ford F250 Super Duty pickup trucks. Only 15 artist slots are available for the month, with some artists buying more than one week at $450 per week. Sand and metal costs are extra. Interns are paid only in experience, and yet more than 50 students applied last year for the 15 openings. Most students work other jobs before or after July to fund their month in Indiana. Last year the team welcomed its first international intern, and this year a Polish student will join the crew.

Taking an artist slot, David Marquez, an assistant professor at Western Kentucky University, plans to get a lot of work done in his week in Solsberry. During the academic year, he is too busy to do much cast iron work, so he plans to make 20 molds for several sculptures. “I like getting my work done,” he says. 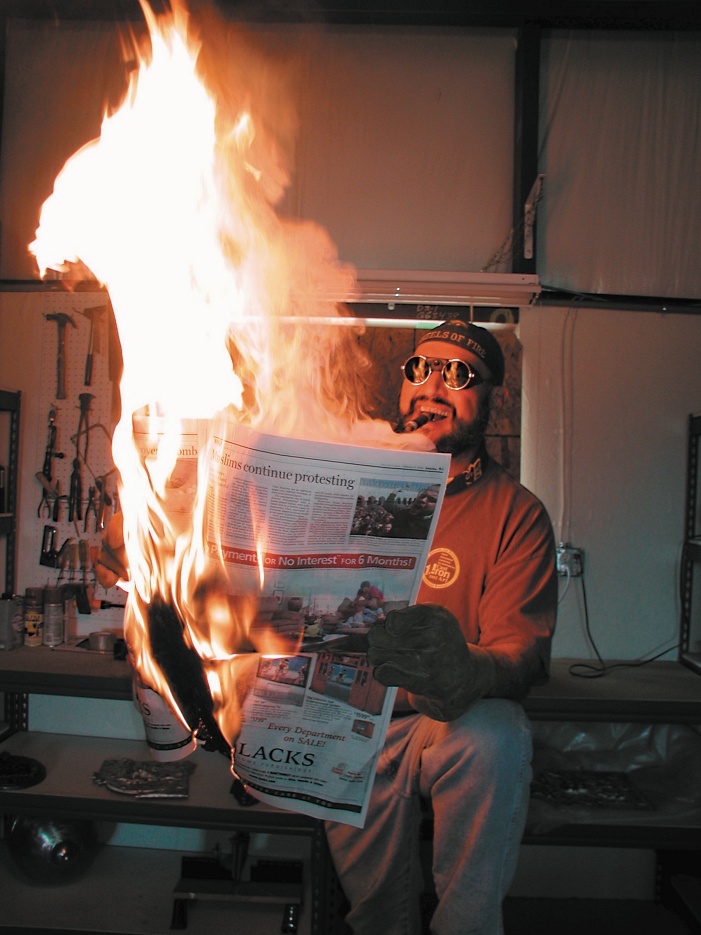 Masse’s mentor, Jack Gron (above), a retired professor of art at Texas A&M University-Corpus Christi, will be honored at this year’s [email protected] Iron Pour. | Photo by Paula Gron

One of Marquez’s students will be an intern this year. At the sculpture park, “they’re immersed in the process,” Marquez says. Students learn about maintaining a furnace and they build a network with the resident artists, too. “It’s like a family,” he says.

Masse agrees, which is why this year he invited Gron, who retired in 2017 as professor of art at the Texas A&M University-Corpus Christi, to be honored at the [email protected] event. Gron taught Masse about cast iron sculpting at the University of Kentucky, and later how to build the furnaces. “We’re giving him one ton of iron to do whatever he wants to do with,” Masse says. “It’s time to give back to the old guy.”

Gron plans to create an arch that will serve as an entryway to the Sculpture Trails Outdoor Museum. Others will collaborate with him on the arch, adding an object of their own. These might include a leather jacket, goggles, an old cellphone, a helmet, and Gron will arrange the composition, making sand molds from the objects. “The detail’s amazing,” Gron says of the casts. “It’ll capture almost any texture.” When asked how he feels about getting the recognition, Gron jokes, “It’s about time. I sweat blood for those turkeys.” He quickly follows up with, “Wherever I’ve taught, I’ve been blessed working with really talented young people. These guys have gone on to create their own legacies. For me, the honor is seeing them be successful, and meeting their proteges. That’s really a blast.”

Whether visitors come out for the aluminum pour on July 13 or the iron pour on July 27, the barn will be open, artists at work. Masse’s dad has given up on ever getting it back. 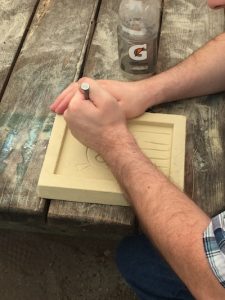 Laurie D. Borman is a Bloomington writer and editor. A former travel magazine editor and past president of the Society of American Travel Writers, she also taught magazine reporting at Indiana University. She grew up in northern Indiana and moved from Chicago to southern Indiana for the hills, hiking, and culture.
Tagged
Comments