Farm to Yarn: The Dye Part 2 of a 3-Part Series on the Life of Local Fiber 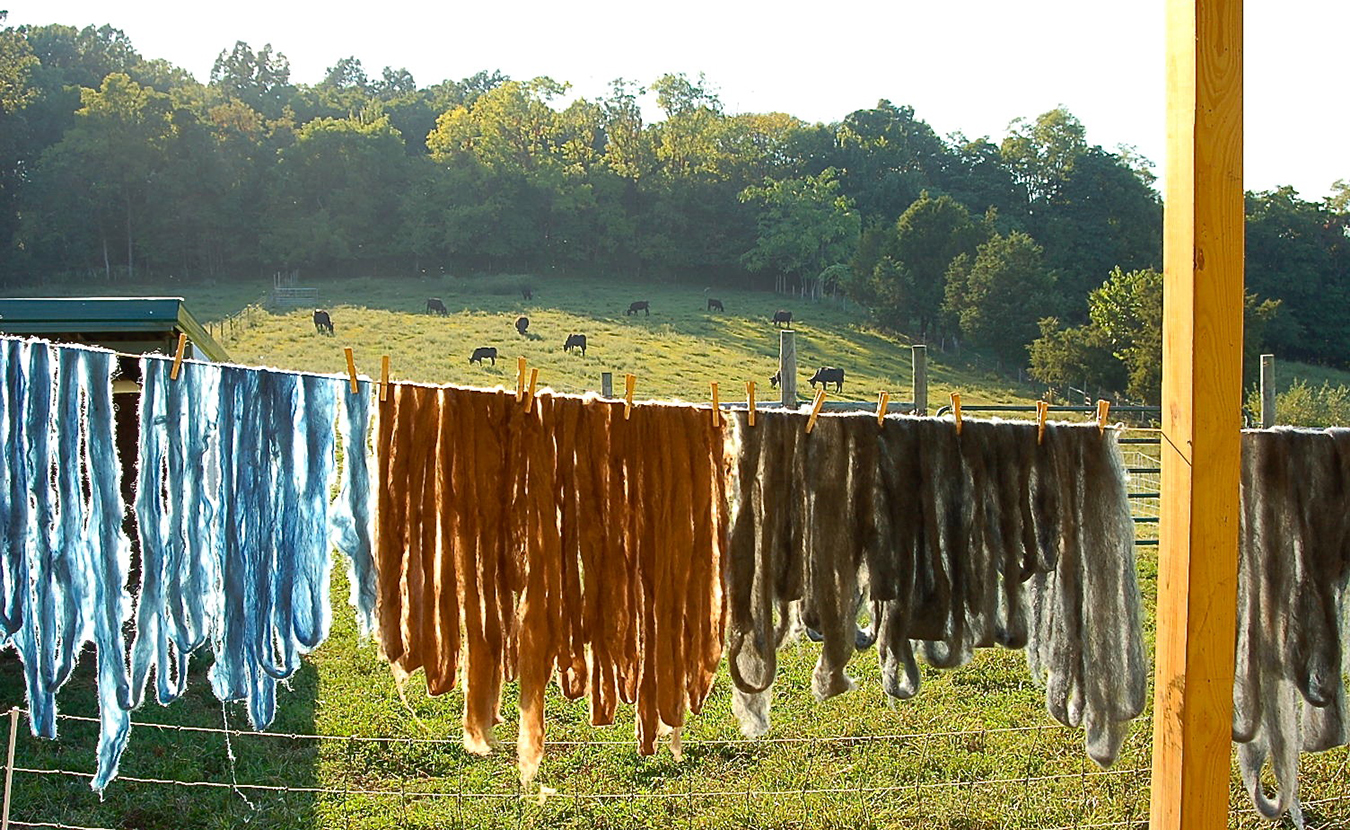 It’s a sunny fall day, cool enough to wear layers but warm enough that by afternoon I’m sweating through them. It has been a long day already and, as I head out of town, I’m wishing I had had time to take a nap. When I pull into Whitney Schlegel’s driveway this time, no one — not even Stanley the Great Pyrenees — greets me.

But I’ve been out to Marble Hill Farm enough times now to know the drill. Whitney is surely out at the sheep barn, tending her ewes or prepping some dye baths. I start down the gravel path, savoring that peaceful hundred yards. I walk past pear-laden trees on one side and, on the other, miniature donkeys that are familiar now but no less charming. Suddenly, revived by the country air like some cliché, I don’t feel tired anymore. Whitney prepares undyed wool for the dyeing process by soaking it first in an alum bath. This step, called mordanting, encourages certain plant dyes to affix to the fiber more readily and more permanently. To her left, sumac berries simmer in hot water to release their pigment for dyeing. | Photo by Samuel Welsch Sveen

Down at the sheep deck, Whitney and her friend Andrea Golden are crouched over a pot, waiting for their indigo solution to signal its readiness. We’ll know it’s ready, Whitney tells us, when the surface of the purply-blue liquid attains a yellowish haze. Meanwhile, they try to decide which fiber to dye today. Whitney is in the process of preparing her CSA bundles, and she wants to offer a variety of plant-dyed colors.

Shetland sheep come in eleven different shades, ranging from white to black with several browns and grays in between. The white is prized for its neutral palette for dyeing, but the lighter browns and grays also take well to dye. For instance, Cashew, one of Whitney’s four original ewes, is a tawny beige called fawn. The shade is deep enough — and certainly beautiful enough — to stand on its own, but when dyed in indigo it gains an added dimension, becoming what Whitney calls a “tweedy blue.” We decide that this will be our first project of the day. Blue drops of indigo solution drip from Whitney’s handspun yarn. This yarn has been dyed first with marigold to create a yellow hue and then over-dyed to create green. The two-part process is necessary because, surprisingly, there are few plants that will produce a true green. | Photo by Samuel Welsch Sveen

Whitney submerges one-ounce balls of Cashew’s roving (unspun strands of combed fleece) into a pot of warm water — in dyeing, she tells me, fiber must be pre-wetted if it is to take up the color evenly. Slowly and methodically, she moves sopping fiber from the water bath to the indigo pot, being careful on both ends. If she agitates the wool too much in the water, she runs the risk of irrevocably matting the fibers together and accidentally felting it. If she drips too much water or dunks the wool too aggressively into the indigo pot, she’ll introduce oxygen and upset its delicate solution.

Unlike other plant-based dyeing, indigo is quick. After barely a minute, Whitney pulls the wool out. (We can always put the same wool back in to get a richer color, I learn. With indigo, it is the quantity of dips, not the duration of the soak, that determines color uptake.) Fresh out of the pot, the dyed wool looks otherworldly, an oozing green wad reminiscent of The Joker after his toxic transformation. Within seconds, though, the air exposure turns it a stunning dusty blue. The more we unravel and fluff it, the more the hue develops. It’s like magic.

Whitney and I continue indigo-dyeing all afternoon — we turn white wool into a perfect sky blue; bright yellow into kelly green; buttery beige into aquamarine. We just keep going until the indigo pigment is exhausted — and so are we. Still, every time, it’s like magic. Whitney snips goldenrod from a field behind her house. On this day, we gather bucket- and basket-loads of this abundant plant to supply the necessary 10:1 ratio for dyeing fiber with goldenrod. Some dyes require far less plant weight. For instance, onion skins, which are already dried and contain natural tannins, only require a 1:1 solution — equal parts plant and fiber by weight. | Photo by Samuel Welsch Sveen

Not all plant dyes yield such instant gratification as indigo. Most require heating the plant matter in water for an hour to create the dye and then another hour of soaking the fiber. Some plants, so-called “fugitive dyes” like marigold and goldenrod, also require the fiber to be mordanted (soaked in an alum solution) at the beginning of the process to improve dye uptake and colorfastness. This longer process yields equally exciting, if less immediate, results.

While sometimes tedious, the many steps that make up the dyeing process are also what make plant-dyeing such a malleable and open-ended experiment. On another afternoon, we play around with three different materials — goldenrod, marigold, and onion skins — and manage to get ten different shades from each plant by manipulating or altering different aspects of the process with pre-baths, after-baths, and over-dyes. Goldenrod, for instance, initially yields a bright yellow. (I am surprised to learn that this is merely a coincidence — the color of a flower does not necessarily indicate the color of the dye it will produce.) For a subtle tweak, we soak some skeins of dyed fiber in acids or bases to slightly mellow or slightly deepen their color. For a more radical experiment, we drop a skein into an iron bath, created from either dissolving a purchased iron additive or simply soaking rusty objects in water. This dramatically darkens the yellow, taking it to a deep olive. Still other skeins become deep teal with one indigo dip or forest green with two. IU students experiment with indigo and black walnut dyes on the deck, while marigold-dyed yarn sits in three different after-baths to alter the ultimate color. The acid will slightly brighten the yellow; the base will deepen it; the iron will turn it an olive green. | Photo by Samuel Welsch Sveen

In the midst of the prepping and experimenting, measuring and calculating, Andrea and I watch amusedly as Whitney’s farmer and scientist personas merge in this natural laboratory. A fundamental understanding of the science of dye underlies every aspect of Whitney’s craft. And, as with the wool itself, she likes dyeing with plants because the process insistently connects the final product with its earthly origin. Pulling fiber out of a dye pot and glimpsing its new hue is thrilling not just for the beauty of the color but for the knowledge that we created that color from materials right there on the farm, plants that we had painstakingly snipped and gathered that very morning.

This hands-on relationship with color is so old it feels new. In the digital age, I can choose clothing colors at the click of a button and recolor snapshots immediately after taking them, but the plant-dyeing process is decidedly more analog. I think about this on my drive home that night, about all the foraging and trimming, the preparing of baths and after-baths, the mordanting, dyeing, rinsing, and drying. I think about how drawn out everything is, and how we physically draw out the color from a plant and affix it to an animal fiber. And I realize that the most gratifying part of plant dyeing is that it’s not really magical at all — it’s a slow, methodical, earthbound practice. It is an art and a science and, for Whitney, it is a labor of love.