The first step, says the new Managing Director at Cardinal Stage Company, is to hire a full staff, pay competitive wages, and find a permanent venue for Cardinal Stage Company. In his new position, Gloden will shoulder the administrative responsibilities, allowing Artistic Director Randy White to continue what he does best before his eventual departure. He will join his wife, who took a teaching position with the University of Chicago.

Gloden has spent the majority of his 20s developing arts and culture organizations, such as serving as managing director of Bloomington Playwrights Project and Boise Contemporary Theatre in Idaho, as well as development and community engagement officer at Wayne State University Press. 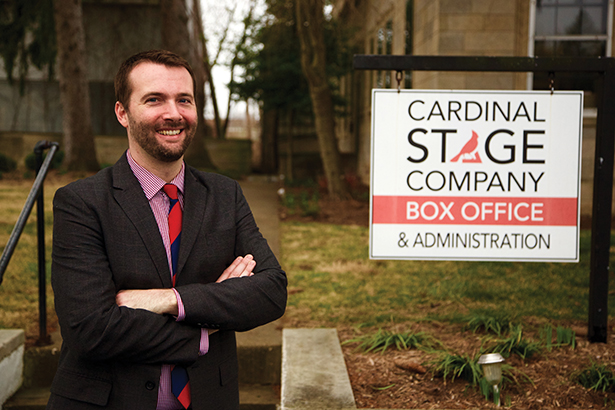 As White prepares for his exit and relinquishes duties to ensure a smooth transition, Cardinal Stage reached out to Gloden to help maintain its vision and establish a setting for what kind of company it wants to be. Having separate leaders in the artistic and administrative roles is common in theatre, so Gloden says having a “Sole Executive Officer” in White — who has done both in the 10 years since Cardinal Stage’s inception — is a miracle.

Gloden wasted no time drawing up plans to put Cardinal Stage on the map — literally. A major part of his “five-year plan” will be finding a permanent location for the theatre company to rehearse and host productions. While the company has had success at historic locations such as the Buskirk-Chumley Theater and the John Waldron Arts Center, having a building of its own in Bloomington’s downtown arts district would make attending plays more desirable and eliminate confusion for those who don’t fully understand how Cardinal Stage actually operates.

It is the first of several steps toward being considered professional, and it will help with recruiting and maintaining local creative and administrative talent. For some of its bigger productions, Cardinal Stage has previously relied on actors and directors from lauded theatre cities such as New York, Los Angeles, and Chicago, but if they can create a new identity for themselves, they will have an easier time keeping local talent.

A big part of recruiting and maintaining employees and actors is paying competitive wages. To raise revenue and support a bigger staff, Gloden plans to double-down on community outreach and use his Bloomington connections to partner with local businesses, investors, and educators.

“Essentially, we need to prove that Cardinal is worth investing in as a local attraction,” Gloden says.

Given the frequency of sell-out shows, it is clear that the community has a desire for theatre, but in order to grow, Cardinal Stage will need the attention of those who are unfamiliar or otherwise uninterested. Initially, Gloden wants to achieve this by strengthening some of Cardinal’s education programs, such as Cardinal for Schools, and bringing in more students for tours. He believes that theatre dramatically improves children’s education experiences, and Cardinal Stage can grow its presence through youth engagement.

“I know this is a critical time,” Gloden says, “and we will be much stronger once we get through the bumpy transition.”

On the surface, this may seem like a huge undertaking, but Gloden has the passion and dedication to make it work. It wouldn’t be possible if he didn’t love and surround himself in the arts. For example, despite the theatre consuming a large part of his work week, he still spends his free time attending new local shows with his wife — who happens to be an actor and playwright.

It becomes clear when Gloden talks about what he likes to do in his free time that Cardinal Stage has found a worthy promoter. He begins by describing a planned trip to a World Wrestling Entertainment event (he’s a huge fan) and immediately shows how theatre could learn from WWE’s style of sports marketing. Although theatre and professional wrestling might not seem to have much in common, they both entertain their audiences with high drama. And, as Gloden sees it, WWE has learned to appeal to people far beyond their original fan base.

In Gloden’s hands, you can expect big things from Cardinal Stage Company in years to come.