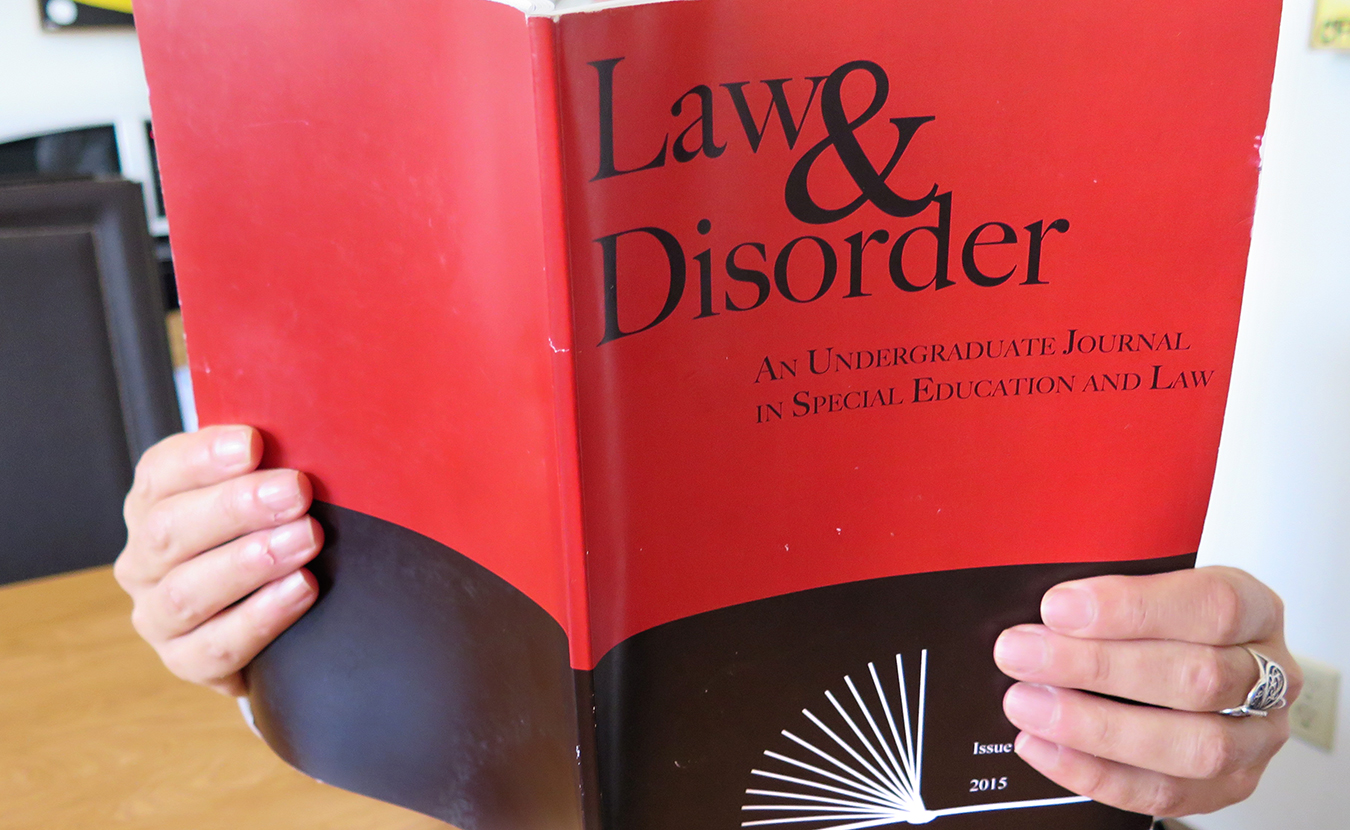 In writer Ann Georgescu’s third article on HOPE, an IU mentorship program for youths in juvenile-detention facilities across Indiana, she looks at how one of the young women used poetry to get her through the long days of incarceration. Her poem "Big Brother" was published in "Law and Disorder: An Undergraduate Journal in Special Education and Law." | Limestone Post

[Editor’s note: Helping Offenders Prosper in Employment, or HOPE, was developed by IU Professor Theresa Ochoa as a mentorship program at the Madison Juvenile Correctional Facility when it was Indiana’s only maximum-security detention center for girls. At the time, HOPE was the only mentorship program of its kind in the country designed to help break the school-to-prison pipeline for juvenile offenders. Now it has grown into programs for youths in juvenile-detention facilities across Indiana.

These are the first lines of a poem written by Samarnye, at age 18, while she was incarcerated at the Madison Juvenile Correctional Facility (MJCF). [Read the entire poem at the end of this story.] She and the other girls (referred to as “students” by the staff) were invited to participate in a poetry slam. Some spoke of happy memories, some spoke of pain and suffering, some described a life they wished to lead, while others told the deeply personal stories about what got them into prison.

Living within the sterile walls of a detention facility — wearing identical clothing and where makeup, hair products, and jewelry are forbidden — there is not much opportunity for personal, creative expression. But, through writing, the students are able to explore some of their feelings and raw emotions, whether painful or joyful, and the poetry slam gave them the opportunity to share their most heartfelt experiences with each other.

The mentors from HOPE, or Helping Offenders Prosper in Employment, were so moved by what they heard that they decided to publish some of the poems. The team chose a selection from Madison and the other correctional facilities, where they mentored both young men and women, and published them in Law and Disorder: An Undergraduate Journal in Special Education and Law.

One of the published poems was Samarnye’s, which she titled “Big Brother” and tells of her sadness over not hearing from her older brother during her three years of incarceration. While she was at MJCF, her brother got married and moved to another town with his new wife, whom Samarnye had not yet met. She yearned to share in his new life and happiness.

Now out of prison, Samarnye talks about writing her poem. “They asked if we wanted to participate in a poetry slam,” she says, “and I was trying to think of what to write about. I had heard some other girls talking about their big brothers, and I had been really missing mine. I was thinking about the pictures of us my mom had sent, and I was hurting because he had not contacted me — and then I heard a beat in my head.”

Samarnye grew up writing songs and poetry with her two brothers, one older and one younger. She also loved to sing and dance and used to perform for her family.

Samarnye’s mother, Samantha, beams as she shares one of her daughter’s songs that she has saved on her phone. “She was always a bright and creative child,” says Samantha. “I always knew she had so much potential and would one day show the world her talents. When she was a baby, and first learned to talk, she would sing her nursery rhymes. She would make up a melody and even sometimes add her own lyrics. I was amazed.”

Samarnye says that writing poetry while at MJCF, helped her through the long days of incarceration. However, despite being out, she has still not heard from her big brother. “He is busy,” says Samantha. “I’m sure he will come to visit sometime soon.”

These days, when Samarnye is not at work, she continues to write poetry and lyrics and sing songs that her mother proudly records.

Within the past year or so, the HOPE mentorship program has expanded to serve the young men’s facilities in Logansport and Pendleton and will continue to serve the young women’s facility, which recently moved to LaPorte, Indiana. This coming fall, HOPE will have nearly 25 mentors in training across the northern IU campuses, including IUPUI, IU Kokomo, and IU Northwest, in addition to IU Bloomington. The mentors will be organizing events for the students, including a Dress for Success fashion show that will take place at the Logansport facility on October 29 and a cookie-baking workshop for the students at the Pendleton facility.

Over the summer, Ochoa and HOPE mentors traveled to Norway to visit Halden Prison — a facility for incarcerated men. The Norwegian criminal justice system is considered the most humane in the world, with a focus on rehabilitation rather than punishment. Their program, like HOPE’s, focuses on providing the inmates with opportunities to learn new skills to prepare them for life once outside. The trip was an opportunity for HOPE to learn, connect, and share ideas with the Halden facility.

One more piece of exciting news: Samarnye was recently promoted from her entry-level position to customer-service manager, based on her demonstrated capacity to solve problems and for her friendliness toward her customers and co-workers.

Ring ring, ring ring, Hello, Hey. Oh nothing, okay, sure, tell him I said I love him too …
So now you’re faceless.
I try to talk to you but time gets wasted

I never thought my heart would feel so weightless
Cause you took everything when you said you couldn’t make it And as I
Sit on this floor and watch this TV
I see kids just like me
Laughing with people like you
With the hellos and goodbyes
The I love yous and the cries
But you couldn’t and the time
To just stop on by and
I understand you gotta work
But understand that I am hurt
Convos on the phone are pointless
I think you’re missin’ the point and
I miss you while you’re off getting married
To a girl I never met
I really wanna meet her
But I ain’t seen you yet
For three years I been waitin’
For you to pop around the corner
I know we had our ups and downs
But now that time is over
Where are you, I can’t see
We can’t be a trio without number three
But you’re one, the oldest, I am young.
And right now, feels like we’re done
I see pictures of you and I think
When can I see you when I’m not lookin

At a piece of colored plastic paper hanging from the roof of my bed And as I hang my head I think, woulda been nice if you wrote Right now feels like a knot in my throat
I think I’m getting a cold

So should I throw on my coat?
And sit and wait while Mama sends me these photos of you and her
But, you can’t feel the brr as my mouth forms the word Brother Sometimes it feels like you have a different mother
I cry by night and wait by day for you to come around
And hold me like you used to when we were little
For you to pick me up off my feet with your bear hugs
For you to give me kisses and tickle me until I laugh out loud like a child But for now, you’re just a distant memory
That I’ve been waitin’ for to come around once again
A fantasy that has left me stuck between two worlds
In one I grew up with you, in the next you weren’t there.
Right now, I just want you here.
Here to crack jokes on Mama like we used to.
And make her laugh when it was Greg, me, and you.
Ring ring, ring ring, hello ………