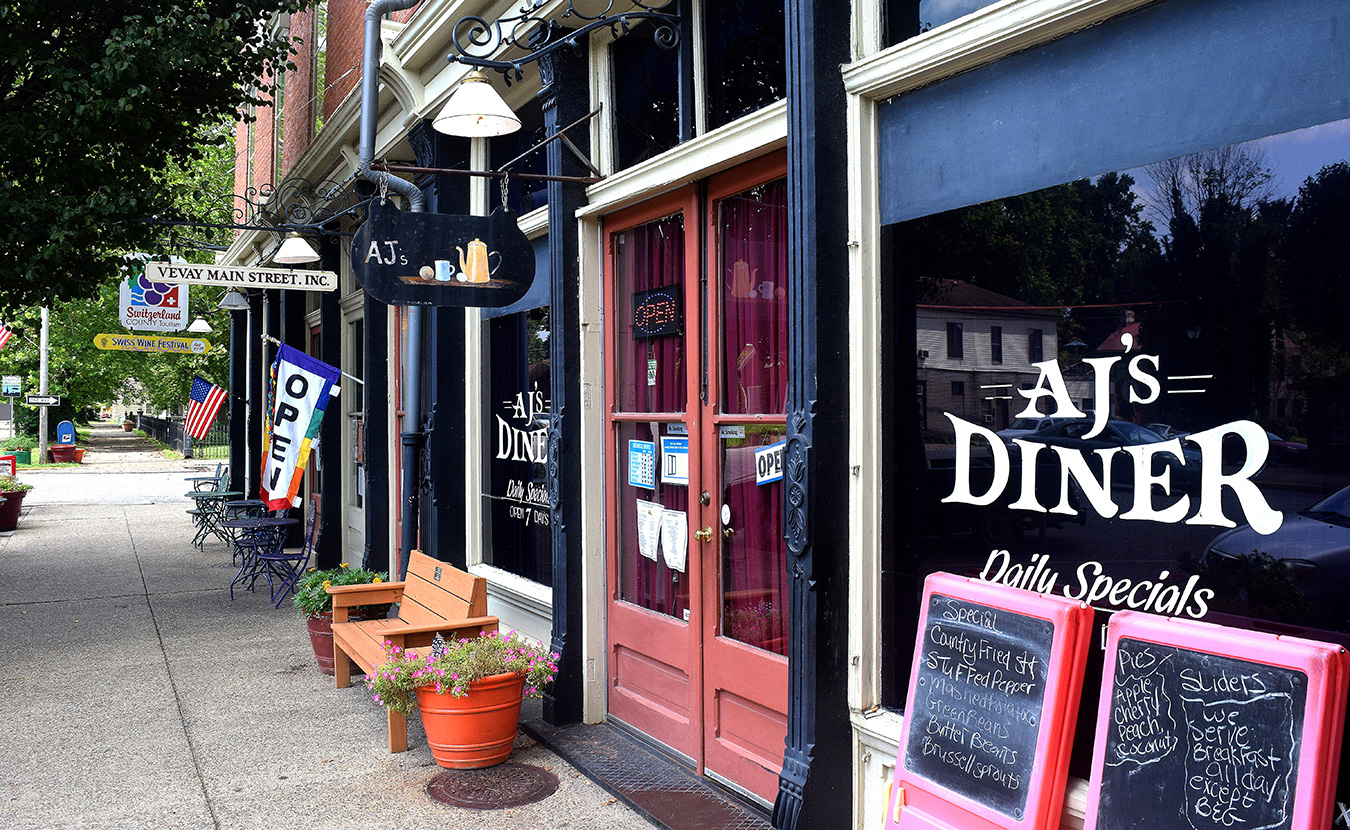 The “Birthplace of American Commercial Wine Making,” Vevay is a small town that sits along the Ohio River in southern Indiana. Built on winemaking, Vevay's Swiss Wine Festival runs from August 25-28. Writer Michael Waterford recommends AJ's, pictured here, for breakfast and as a place to get to know the locals. | Photo by Michael Waterford

Grandpa Bobby loved to go for drives. Once, when I was eight years old and visiting my grandparents for the weekend, Grandma Marty filled a cooler, I climbed into the back of the van, and we set off toward Vevay, Indiana. I never worried about the destination, because my grandparents always went the extra mile to spoil me — even letting me choose the music. (Let’s say it was the Eagles’ “Life in the Fast Lane,” you know, just to set the mood.) I don’t remember everything about that weekend, but I do remember being on the Ohio River, watching the barges float by while I stuffed my face with as much slaw and fried chicken as my then-plump self could contain. Recently, I went back to rediscover this rich little community and to prove once more that small towns make for great weekend destinations.

This unpretentious and little-known town isn’t particularly easy to get to from Bloomington — by car it’s about a two-hour drive southeast. Compared to neighboring Madison, Vevay seems fairly inconsequential. But the “Birthplace of American Commercial Wine Making” sits along Ohio River Scenic Byway 56/156, high on a ridge overlooking the water. And although the entire highway deserves exploration, Vevay, like its wine, has gotten better with time. The Ridge Winery tasting room has views of the Ohio River. | Photo by Michael Waterford

I applaud them for not changing much since it was settled, pre-statehood, in 1802. That’s right — this little town was around before our fledgling country had mapped out the Indiana topography. Vevay’s name comes from the Swiss immigrants who founded it and Switzerland County, where it resides. (Vevay’s namesake in Switzerland is spelled Vevey.) It made its name by being the home of the first successful commercial winery in the United States, established by John James Dufour at the turn of the 19th century. And that Swiss wine tradition lives on through Vevay’s biggest celebration of the year — the annual Swiss Wine Festival. This year’s 45th celebration runs from Thursday, August 25, to Sunday, August 28.

Home to just 1,600 people (for contrast, Ellettsville is four times larger), Vevay has 16 festivals throughout the year, including concerts, firearms competitions, community-wide yard sales, car shows, an Oktoberfest “Beer Bash,” and many more — but nothing compares to the Swiss Wine Festival. Every August, more than 20,000 people come to Vevay to celebrate local viticulture and drink their way through town. The Ridge Winery tasting room, a favorite wine-festival destination, has a back patio with views of the barges floating by below you. The historic Schenck Mansion B&B sits high on a hill overlooking Vevay and the river. | Photo by Michael Waterford

If you can’t make the wine festival, a weekend in Vevay is cheap and easy to do. Depending on the time of year, plan on spending anywhere from $200 to $400 to get the full Vevay experience. I suggest staying in one of the B&Bs in town. The Schenck Mansion, on the edge of town, is by far the most popular. Built in 1874 by Benjamin Schenck, showboat captain and literal hay mogul, a room here gets you a view that overlooks town and the mansion’s beautiful gardens. But my personal favorite is the Swiss Inn: For $60 to $70 you get a room downtown, closer to the water — and to the wine. Located on the corner of the only stoplight in town, the Wine Cellar offers tasting and bottles of Indiana-made wines. | Photo by Michael Waterford

Across the street from the Swiss Inn sits the Wine Cellar. It sells solely Indiana-made wines, but catching it open might prove difficult as they run on small-town time (meaning they don’t hold standard hours). For breakfast, AJ’s gets my vote. Nothing allows a traveler to get more of a feel for a town than talking with the farmers and other early risers at the local diner. But the best coffee award goes, somewhat surprisingly, to the Switzerland County Tourism Office and Cafe, sitting on Main Street in the historic Phoenix Hotel. You can sip quality coffee on the front steps and talk with the lovely folks in the office about all the best bits of Vevay. They recommended to me the self-guided architecture tour, where each spot on the complimentary map is matched up with signs in the yards of each point of interest. Waterford recommends going to Ladies’ Bazaar for souvenirs. He says it’s “just a little quirky, and a little off the beaten path.” | Photo by Michael Waterford

Care for a Vevay souvenir that isn’t fermented? Stop in the adorable Ladies’ Bazaar for antiques, books, specialty foods, stationery, and more. You can also go to the local art gallery, see a show at the theater, or visit some of the best small-town museums I’ve ever seen. Their numerous exhibits cover everything from showboat replicas and the stories of their showboating captains to the effects of World War I on Vevay — and even an exhibit about the first piano brought within Indiana borders. There are many historic homes in downtown Vevay. | Photo by Michael Waterford

Vevay is filled with history and culture. Through the town’s historic architecture and its residents’ appreciation of its past, visitors witness a truly American story. Founded riverside by immigrants, it was built and maintained by hard-working Americans with an appreciation for the good-tilled earth of a vineyard. And lastly, it is maintained by city officials and townsfolk who see the value in preserving historic downtown spaces — not paving them over or forgetting about them, as so many towns have done before.

It’s our job as travelers and tourists to simply go, see, and enjoy these historic towns. So listen to Jack Reno and head on down to Vevay, Indiana. Oh, and go thirsty.

No Replies to "Destination Small Town: Vevay, a Small Town with Big Wine"