Sketches of set designs by C. David Higgins for Cardinal Stage Company’s production of ‘Disney’s Beauty and the Beast.’ The original sketches will be auctioned off at CardinalStage.org.

When C. David Higgins was a boy growing up in Bloomington, he spent many Saturday mornings at the Indiana Theater watching cartoons on the big screen. During breaks in the animated shows, the theatre would host activities on the stage, inviting children to partake in pie-eating contests or grabbing nickels from a jar. It’s on that very stage at the now renovated Buskirk-Chumley Theater where Higgins is tasked with designing a spectacular set for the Cardinal Stage production of Disney’s Beauty and the Beast. Kids and families will once again fill the theatre to be thrilled by make-believe stories, though instead of animated films as in his childhood, Higgins will help bring the fairy tale to life.

If anyone is up to the task, it is Higgins. He studied scenic design at the prestigious IU Jacobs School of Music, then became a faculty member at the same program and designed sets for the operas and ballets at the Musical Arts Center on campus until retiring a few years ago. He has traveled the world to design sets for fabulous production companies. He has even designed several sets for Cardinal Stage productions. “I had heard David was top-notch, and a master illustrator and painter,” says Kate Galvin, Artistic Director at Cardinal. “I wanted to work with him on the holiday show, and he has definitely delivered.” 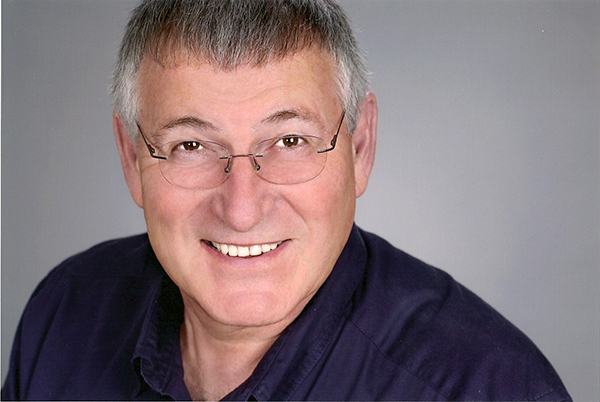 C. David Higgins designed the set for Cardinal’s holiday show. Although he has designed sets for productions around the world, his first experience with the stage was while growing up in Bloomington, when he attended many shows at the Indiana Theater, now the Buskirk-Chumley Theater.

For Higgins, the process of creating a set for this particular show had challenges. When he and Galvin discussed her vision for the musical, they both agreed that it could not and should not imitate the Disney cartoon movie. As Galvin explains, “The structure of the story had to be adapted to a typical two-act show and bring the show length to what theatre audiences expect, so there are some adjustments to the writing and a few new songs audiences will enjoy.”

There is also the considerable space constraint when working within a theatre. “The Buskirk-Chumley is a beautiful space but there is limited space backstage for storage or moving pieces around,” says Higgins. After considering the director’s vision and space restrictions, Higgins talked with Technical Director Tien-Yin Sun and Assistant Technical Director Tom Pendley to get their input. After all, they are tasked with coordinating the actual construction of the set once Higgins designs it. Together, they consider scale, materials, movement, and costs, providing the parameters for Higgins to start creating.

With its origins as a written fairy tale, combined with the prominent role books play in Belle’s life, a literary theme emerged. “I wanted to create a set that emphasized that connection between Belle and her love of literature and the world we create through stories,” says Higgins. The result is a set that features enormous books as the background, illustrated with beautiful paintings on pages. “The holiday show has to be a spectacle, so we did a tremendous amount of painting to make the set visually exciting,” he says.

Galvin agrees, “We’ve found a way to suggest all the locations in the village, the castle, the forest — and keep the action flowing.” She praises Higgins for his creative design, and the technical team and Production Manager Joel Magill for bringing it to life. “There were a lot of puzzles to solve to make the set work and they came up with great solutions,” she says.

The set is a critical part of any theatre production. As Galvin explains, “It supports the storytelling and dictates the flow of action, while giving us visual cues about the characters or theme that may not be indicated outright in the dialogue.” This is why such a great deal of thought, energy, and teamwork is dedicated to designing and building the set.

One part of the design process is putting ideas on paper. Higgins creates various sketches of the set, which then guide the building process. The sketches he created for Disney’s Beauty and the Beast are lovely pieces of art. The team at Cardinal was so impressed, they decided to give the public an opportunity to purchase the sketches through an online auction. They will be posted on the Cardinal website during the run of the show (December 13–30), and guests can place a bid through the site. Most sketches will start at $100 and will include full matting so they are ready for framing.

Higgins creates a variety of sketches for each set design to guide the building process, such as this one of the castle doors (left) and Belle’s village.

Higgins was happy to contribute his sketches to Cardinal’s fundraising efforts. He provides his set design services for the same reason: Cardinal is an asset to the community. “I’m very confident in the leadership team and excited about what they are doing to bring quality theatre to the region,” he says. “I’m thrilled to be part of the holiday show; it’s a big deal for Cardinal.”

Higgins sat in the Indiana Theater as a child watching cartoons with friends. Now he gets to help introduce children to the beauty of theatre, transforming an empty stage into a magical fairy tale. He’s spent his entire career transforming words into physical spaces that help tell the story before an actor even steps onto the stage. Luckily, Cardinal audiences get to enjoy his talents once again.

Cardinal Stage’s production of Disney’s Beauty and the Beast will be presented December 13–30 at the Buskirk-Chumley Theater. Find ticket information and details on the online auction at CardinalStage.org.