‘Dear S—’: A Letter from Women’s Marcher to 11-Year-Old Girl 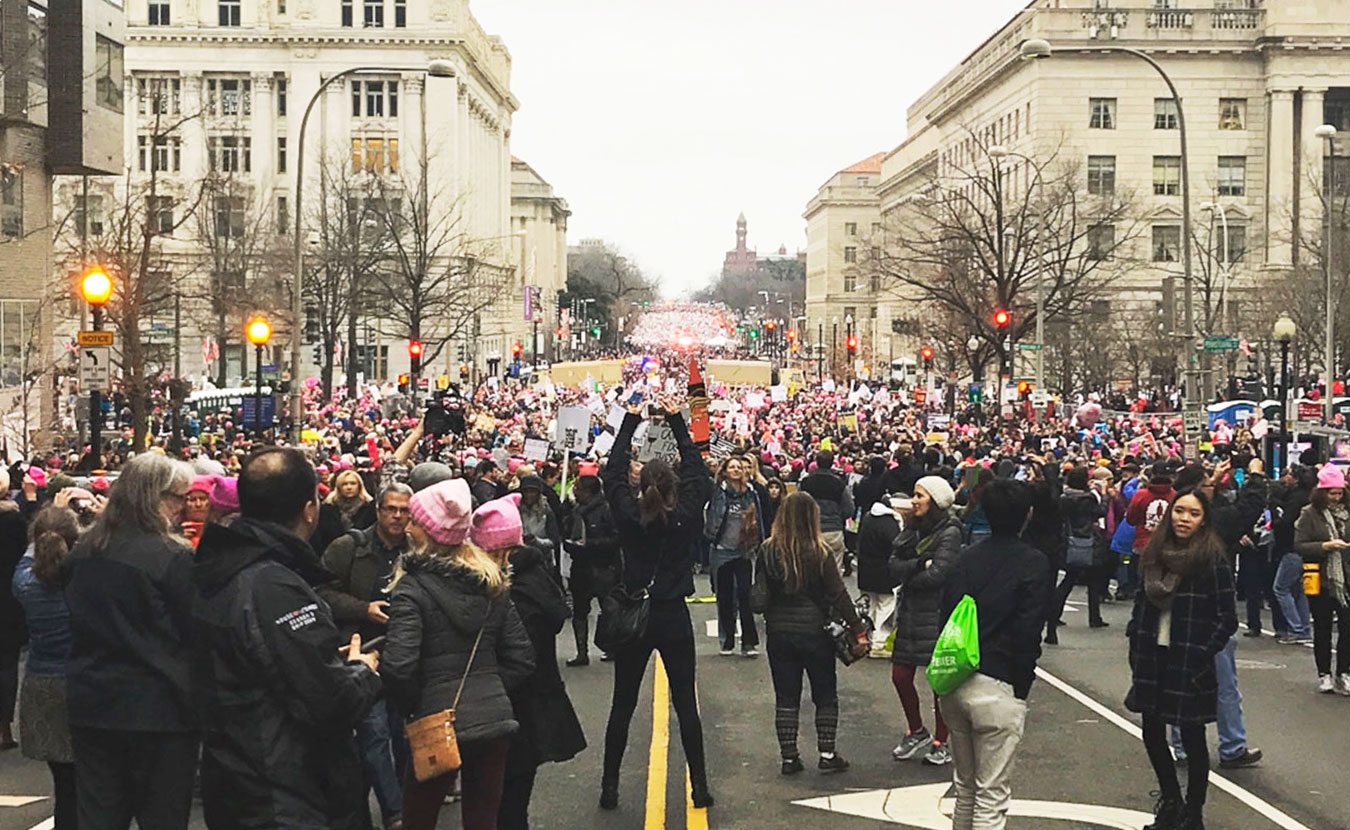 A look toward the crowds of people in the streets and on the National Mall at about 4 p.m., Saturday, January 21, 2017, during the Women's March on Washington. | Photo by Lynae Sowinski

Here you are, just a few days away from your 11th birthday. You are witness to a worldwide uprising of women and the people who respect them, standing up to ignorance, bigotry, hatred, misogyny, and xenophobia. And yet you remain unconvinced. “It won’t matter,” you say. Your mother’s heart is broken. Marchers gathered on the steps of the National Gallery of Art on Saturday morning. | Photo by Lynae Sowinski

I don’t have a crystal ball. I cannot predict the future, but I will tell you what I saw this weekend. Bleary-eyed after a 14-hour bus trip from Bloomington to Washington, D.C., I looked out on a vivid sea of pink hats, of women, men, and children, in all of their human colors, and into eyes of kindness, of compassion, of love. A Catholic Church opened its doors on our walk to the rally. We stood in the bathroom lines and figured we’d make better time if we used both the men’s and women’s rooms. “It’s not North Carolina,” a woman from Florida quipped. Her friend had a sign that read, “You’re so vain, you probably think this march is about you” (a play on words from a Carly Simon song, my young friend). And we burst out into song. It’s not about him, I thought, it is about all of us. We got our wake-up call.

We headed into the crowd and all we encountered was civility and curiosity. And high fives. “You’re from Indiana? Fantastic!” We met folks from New Mexico, Michigan, California. “This is what independence looks like!” we chanted. We passed messages in strident voices: “March to the left, bathrooms to the right!”

“Jesus loves women. Jesus loves science!” We sang at the tops of our lungs. A pink-frosted cupcake Ruthie hopes to bake with S—. | Photo by Ruthie Cohen

The sea of pink hats and vibrant posters grew to the point where we never did get near the podium. I never heard the celebrity speeches or the music. I didn’t make it to the White House. And none of that mattered. The crowd was so large, so unexpectedly so, that we were rerouted. We were everywhere. And that is what matters. “March today, organize tomorrow,” said a woman handing out cards.

Another woman from Summit, New Jersey, held this sign and handed out stickers: “I can’t believe we still have to protest this shit (jewbelong.com — for when you feel you don’t).” She’s right and we still do.

I am so very sorry. It’s a sad and messy legacy we leave to you. But I urge you, look to your mother and father and to all the extraordinary people in your young life. They will not abandon you. Please don’t abandon them. Good people must continue to do good. You don’t need a crystal ball to tell you that. But you do need to keep faith in yourself and know that what you do does matter.

In February 2016, Al Gore delivered a TED talk on the case for optimism in climate change. In his concluding remarks, he quotes the poet Wallace Stevens: “After the final ‘no,’ there comes a ‘yes,’ and on that ‘yes’ the future world depends.” He went on: “When any great moral challenge is ultimately resolved into a binary voice between what is right and what is wrong, the outcome is foreordained because of who we are as human beings.”

So come over to my house, young S—. We will bake cupcakes as we’ve done before. And we will whip up a big batch of fluffy frosting to go with them. Pink, of course.

Ruthie Cohen moved from New Jersey to Bloomington in November 2011. Every day she marvels at her good fortune to be living in this gem of a town. When she is not devising recipes in her kitchen and feeding her friends, Ruthie practices and teaches yoga at Ekah and Vibe Studios.
Lynae Sowinski