‘Robin Hood’: A Timeless Tale at the Perfect Time by Julie Warren 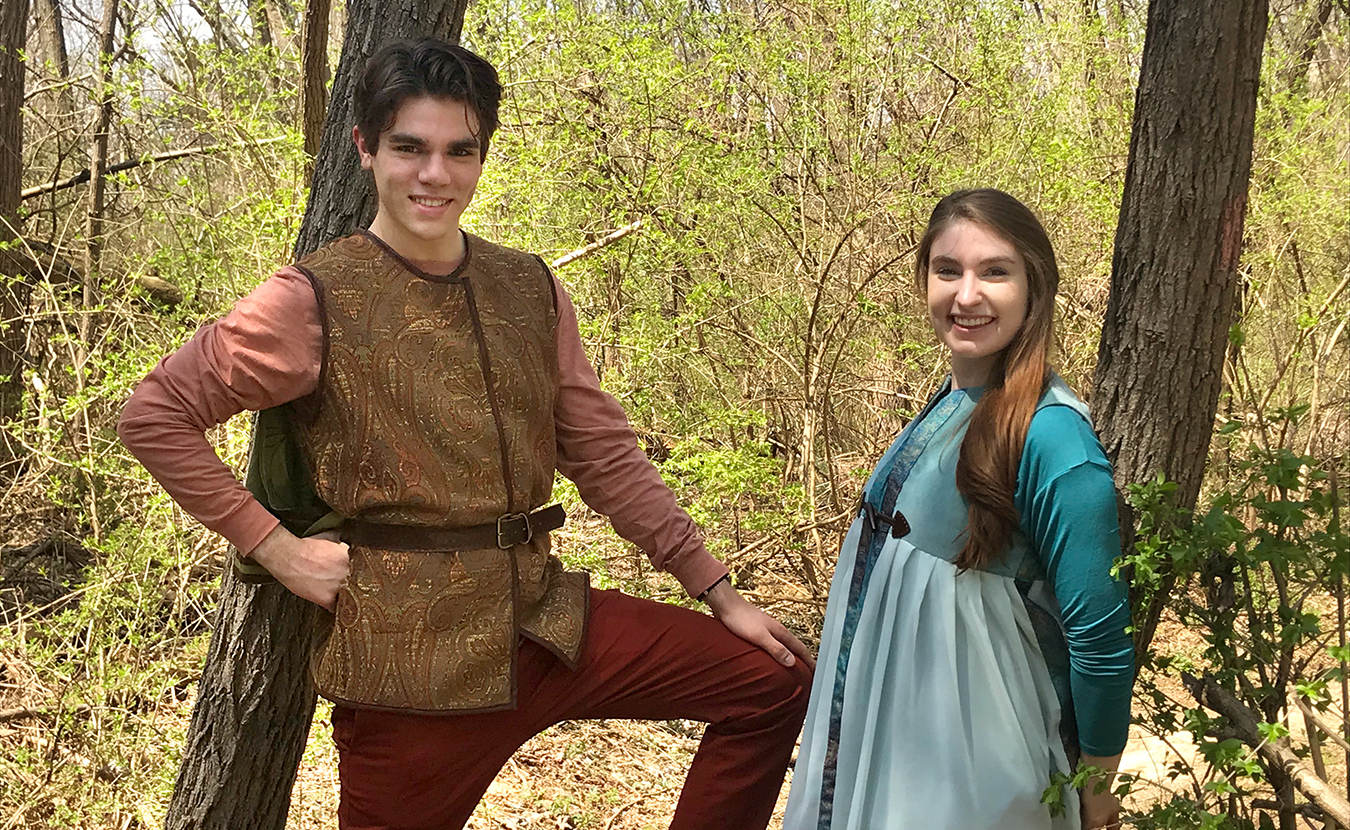 The struggle for equality and justice has been a prominent topic in recent years, affecting nearly every aspect of society from politics to school bathrooms. It has been discussed at the conference table and dinner table, on television and in newsfeeds; it’s been Instagrammed and tweeted (and retweeted). It’s an intense issue for many people, and the cause of numerous awkward silences and angry unfriend-ings. Despite the new ways to address it, this is not a new struggle.

With the constant stream of news and information bombarding households, finding a creative way to examine social issues with children can be helpful. Cardinal Stage Company provides that opportunity: As part of their Cardinal for Kids series, they present the timely and timeless Robin Hood, May 4-20 at the Ivy Tech John Waldron Arts Center Auditorium.

Written by Greg Banks and based on the familiar English legend, the play presents the very serious issues of inequality and injustice in a way that is understandable and appropriate for kids. Robin Hood and his band of Merry Men take money from the rich and give it to the poor, all while escaping the nasty Sheriff of Nottingham and Prince John. The play emphasizes the evil deeds of these rich and powerful men, and supports the goodly Robin Hood, all while pulling the audience into a supporting role by encouraging shouts and cheers on cue. Despite the serious issues it highlights, the play is light, funny, and engaging. 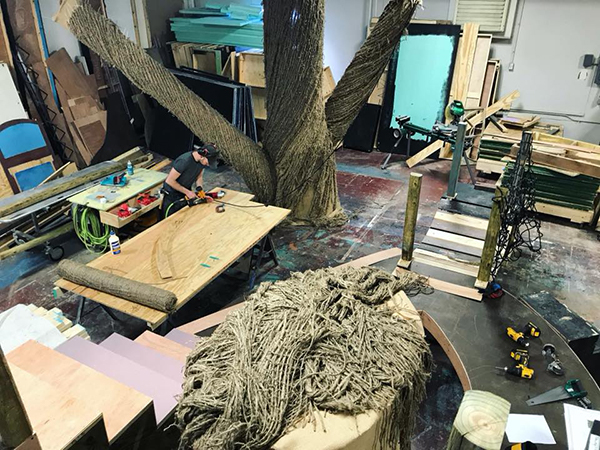 A behind the scenes peak of creating Sherwood Forest.

The timing of this production is appropriate, as news headlines tell readers about tax breaks for the rich, aggressions by people in power, and political leaders acting in their own best interest. But how is Robin Hood, a centuries-old story, relatable for kids today? “He’s really a medieval superhero: He’s given up his place in society and he uses his ‘super powers’ (mastery of disguise, bravery, cunning, and his archery skills) to help those who can’t help themselves,” says Kate Galvin, Artistic Director of Cardinal Stage Company.

Superheroes are popular, with big-budget movies and flashy merchandise produced in bulk. Just like Robin Hood, the modern good guys are fighting powerful bad guys. “Prince John is very vividly depicted in the play as a greedy ruler who doesn’t deserve the crown. He’s hilarious, but he is the polar opposite of Robin — someone who is only out for himself,” says Galvin. “The audience can quickly sympathize with Robin’s cause and understand that Robin and his Merry Men are practicing civil disobedience to some degree.”

In this telling, Prince John and Sheriff Nottingham are comical. They are typically the butt of a joke, and these light moments keep kids entertained and provide a relief from the sinister actions of these villains. That’s the magic of Cardinal for Kids plays, exposing heavy issues without being too intense for young viewers. Often, the play opens a door to a conversation between kids and their parents, friends, or teachers. 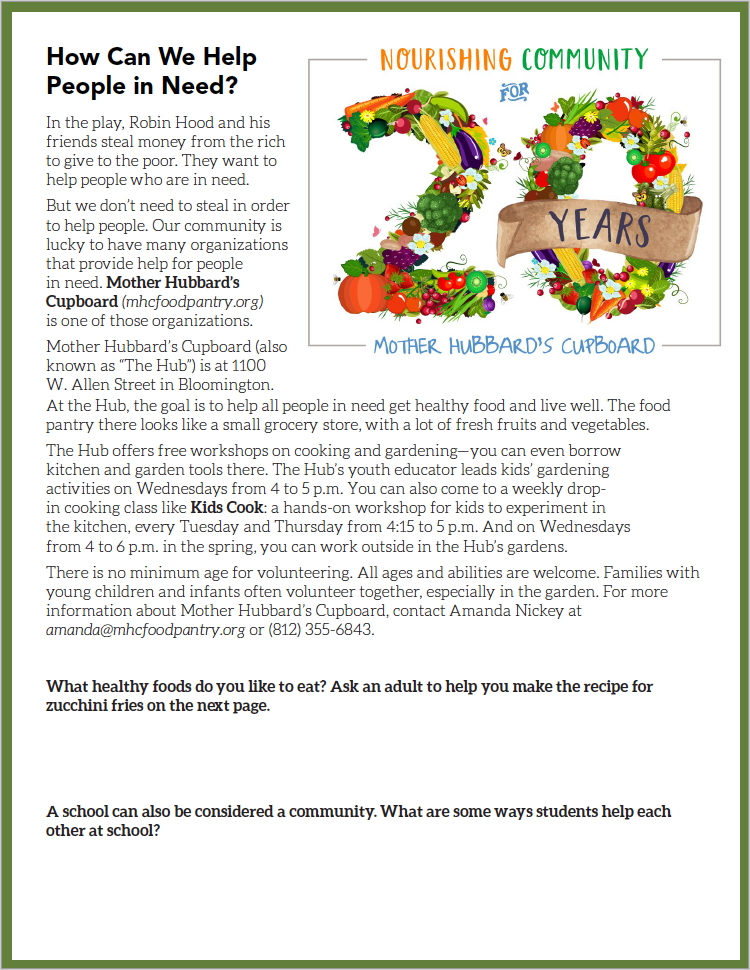 That discussion gets even more robust with the supplemental study guide Cardinal provides to interested teachers and educators. These materials provide additional activities and content that educators can use in the classroom to further investigate the play’s key themes of equality and justice in society. One aspect of the materials touches on the concepts of taxes and government. In the play, the citizens are forced to pay high taxes, but receive little in return. According to Jim Morrison, a teacher at The Project School and member of Cardinal’s education committee, “This can serve as an introduction to government services and how people oppose tyranny.”

Kids are also asked the question, “Is it ever okay to steal?” This is a challenging question even for adults, but kids can also grapple with these ideas. “The study guide also presents ways to help kids relate what they see in the play to the world around them,” says Lisa Champelli, Children’s Strategist for the Monroe County Public Library and a member of the education committee for Cardinal. For instance, one part of the study guide makes the comparison of Robin Hood to local organizations like Mother Hubbard’s Cupboard, and Cardinal will encourage their audiences to make cash donations to Mother Hubbard’s Cupboard at the shows. Champelli points out that even though Robin Hood’s tactics are clearly illegal, “his mission to improve the wealth and welfare of people experiencing poverty is recognizable today in social service agencies.”

With difficult topics come differing ideas, but that is part of having a respectful debate. These discussions are all prompted by Cardinal’s study guide, led by the teacher, and brought to life by the play, with the intention of letting young people “create their own viewpoints on these types of issues,” says Morrison. “It’s electric to see students make the connections between the story and real life.”

Social justice and equality, the role of government in citizens’ lives, corruption of power, and citizen protests are all touched on in Robin Hood, and on the nightly news. It’s a story as relatable now as when it was first told, and Cardinal Stage Company’s production will make that story tangible for young people in Bloomington, inspiring another generation to consider what is right and how to stand up to those who are wrong.