In its first production of the year, Cardinal Stage presents ‘The Mountaintop,’ by Pulitzer Prize winner Katori Hall, in a gripping reimagination of events on the night before Dr. Martin Luther King Jr. was assassinated. Hiromi Yoshida interviewed two of the actors, Michael Aaron Pogue and AshLee ‘PsyWrn Simone’ Baskin, and Scenic Designer Seth Howard for this article. Performance dates are March 3–20.

“Even before the first flash of lightning — and there will be plenty of that before evening’s end — an ominous electricity crackles through the opening moments of THE MOUNTAINTOP.” —The New York Times

“THE MOUNTAINTOP crackles with theatricality and a humanity more moving than sainthood.” —Newsday

“This is playwriting without a net, a defiant poke in the eye of all historical conventions and political correctness. … The King that is left after Hall’s humanization project is somehow more real and urgent and whole.” —Associated Press

Trailer for Cardinal Stage’s The Mountaintop, with performances March 3–20 at the Waldron Auditorium.

During the first three weeks of March 2022, Cardinal Stage will continue to celebrate the legacy of Dr. Martin Luther King Jr. by presenting its first production of the year, The Mountaintop, by Pulitzer Prize winner Katori Hall. The lively repartee between the play’s two characters, King and Camae, at times flirtatious, at others humorous, culminates as a surreal epiphany within Room 306 of the Lorraine Motel the night before the assassination. The play’s magic realism is captivating, its prophetic conclusion uplifting.

While information about the cast and creative team for this production of The Mountaintop is available on the Cardinal Stage website, Michael Aaron Pogue (Dr. Martin Luther King Jr.), AshLee “PsyWrn Simone” Baskin (Camae), and Seth Howard (scenic designer) share personal details about themselves with Limestone Post readers. 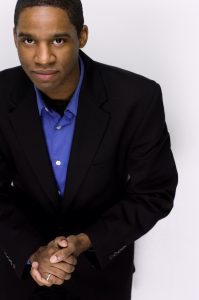 Chicago native Michael Aaron Pogue makes his Cardinal Stage debut as Dr. Martin Luther King Jr. in The Mountaintop. This role would enable his first stage appearance since the start of the COVID-19 pandemic. “I’m grateful to be back working onstage,” he said. “The greatest challenges can reap the greatest rewards.” One of these rewards, according to Pogue, is the “endless gift” of “playing one of the most revered figures in our history.”

Pogue also said the pandemic has “dramatically modified” his preparation as an actor. For example, he foresees that most of his auditions will be conducted remotely, or virtually, saying, “Meeting potential collaborators through virtual windows demands more of my essence to shine through a lens.” The pandemic’s challenges have also enabled him to feel “more grounded” in his work through sustained connection to his “inwardness.”

In June, he will direct the South Bend Civic Theatre production of August Wilson’s Joe Turner’s Come and Gone. 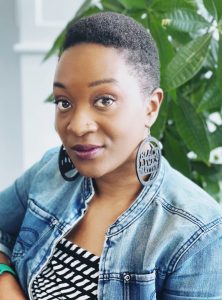 AshLee “PsyWrn Simone” Baskin is a multi-genre artist who grew up in Indianapolis and Georgia. She was a featured artist for the 2021 Art & Soul Celebration sponsored by the Arts Council of Indianapolis. She is also an arts consultant, as well as a teaching artist at the Asante Art Institute of Indianapolis, where she initiates “equitable opportunities and access for artists.” Her multifaceted work attempts to showcase “the entire spectrum of the African American experience” by centering African American cultural contributions within public consciousness.

For Baskin, the most rewarding aspect of her work with Cardinal Stage is the chance to present a “worthy” play, and commends its staff and creative team for choosing to produce it. She says: “Their choosing to produce Katori Hall’s The Mountaintop is a testament to their commitment to upholding integrity in the arts,” and she describes the script as “so well-written with layered meanings, multidimensional characters, and riddled with opportunities for deep discovery and introspection.”

Baskin finds most challenging the attempt to “honor the purity of the work,” she said. “As an actor, it is my duty to bring forth an honest depiction with conviction, to create a space for the ‘art’ to do its job.”

According to Baskin, the pandemic has challenged artists to find new ways to continue thriving on the energy that is “shared and released as a result of interpersonal connection.” While virtual engagement has enabled the expansion of her platform and audience reach, the pandemic has given her the time and space to refocus, and to rethink her “artistic goals and ambitions.” She said: “Overall, the pandemic has made me extremely grateful for any and every opportunity to express, create, critique, and take in art — as to not take anything for granted as it can be snatched away in an instant.” 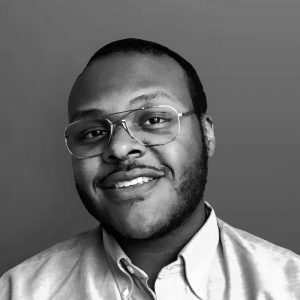 Freelance Scenic Designer Seth Howard recently earned his Bachelor of Fine Arts in stage design, props, and scenic art from the University of Cincinnati College-Conservatory of Music. His design credits include Urinetown, Willy Wonka Jr., The Curious Incident of the Dog in the Night-Time, Pippin, Mansfield Park, and The Crucible.

For Howard, the greatest challenge of contributing to The Mountaintop was the remote aspect of the work involved. Although this aspect is a standard industry practice, he calls himself a “very hands-on individual” who “loves being a part of the creation of things [that he designs],” and who would prefer to work onsite.

Like Baskin, he commends Cardinal Stage’s creative team, saying that they are enabling his stage design to “come to life” exactly as he had envisioned it from the outset. He also said that the most rewarding aspect of collaborating with this team is “being in a room with other Black creatives, who are all just as passionate about telling this story.” This “refreshing” experience has enabled personal connections, while they discussed and dissected “the meaning of the material.”

Howard said the pandemic has positively impacted his career. For example, he optimized lockdown periods to acquire additional skills by teaching himself new programs. He said it would have taken him “months, even years” to acquire these skills. He also designed “theoretical shows” to expand his portfolio and develop his social media presence. He said: “Doing these things has gotten me some recognition in the industry and has opened up new design opportunities for me as well.”

The Mountaintop will run March 3–20 at the Waldron Auditorium (122 S. Walnut St., Bloomington). “Pay What You Will” tickets are on sale now. Theatergoers must wear masks and provide proof of vaccination or of a recent negative COVID-19 test.

Scenes from “The Mountaintop.” | Photos by Blueline

Go to cardinalstage.org/shows to learn more.