Bugs Come to Life in Ali Beckman’s So Fly Taxidermy

Ali Beckman’s predilection for bugs was actually more of a subconscious thing. “Why bugs?” she ponders. “I guess I never thought about that before.” Many creative endeavors are inspired by a romantic saga, and So Fly Taxidermy is no exception. “In December of 2016, I was trying my best to impress a guy,” she wrote in an email. “I would make drawings for him, which, in retrospect, felt very cool at the time. So I came home one day and found two dead flies lying next to one another. I couldn’t get it out of my head that they had had a conversation before they died. I picked the two flies up, put them on paper, drew around them, and I’ve done it every day since. The guy never worked out.” 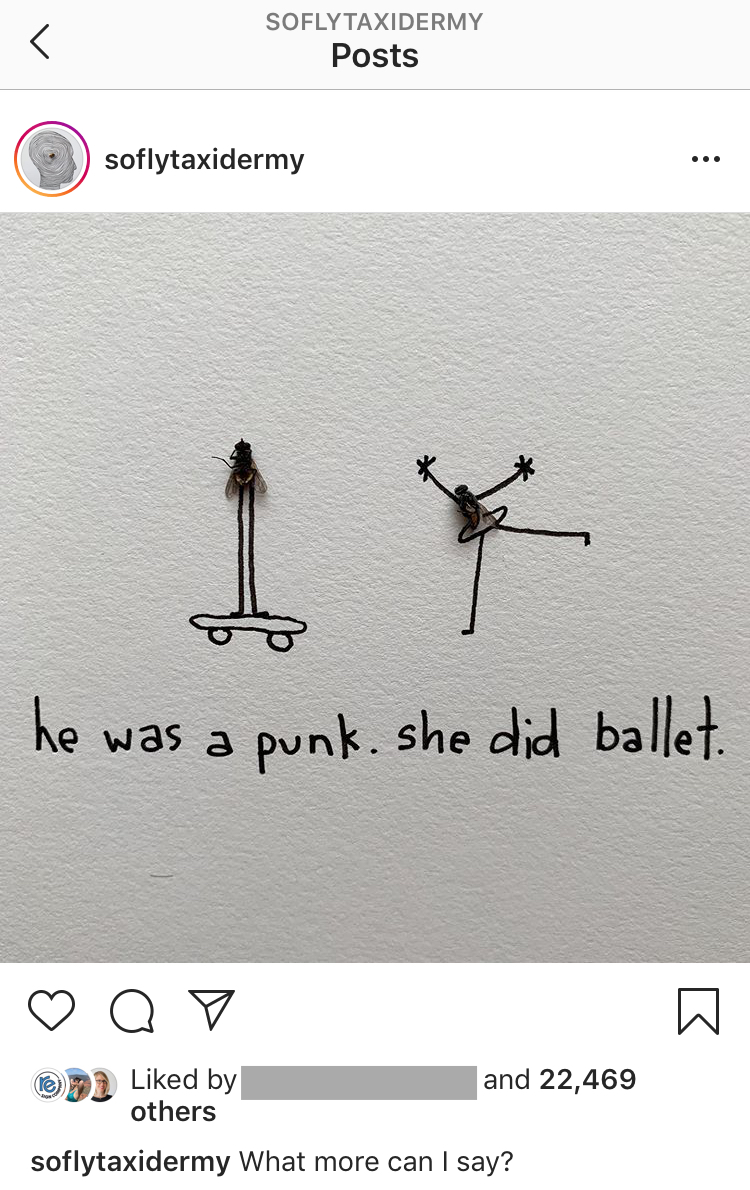 Beckman’s bug-crazy hobby began with drawings she made to impress a guy. “The guy never worked out,” she says. | Courtesy photo

But Beckman, who lives and works in Bloomington, was hooked on her new entomological hobby and just kept on doodling. Her hobby blossomed into a popular Instagram account (@soflytaxidermy) where she posts her illustrations. And now Beckman can add “author” to her title repertoire, as Red Lightning Books, an imprint of Indiana University Press, is publishing a collection of her cartoons.

After the initial picture of the flies, Beckman continued drawing, using dead bugs she found as focal points in the cartoons. “There was never a moment where I questioned it,” she explains. “I just went with it.” And the project took flight from there. Beckman began researching and studying all sorts of bugs, applying her insights to her art and posting her clever cartoons on Instagram. “Now I spend a lot of my free time reading about insects,” she says. “The more I know, the funnier I can be. I can take something that has died and give it a whole new life!”

Creativity comes naturally to Beckman. “I don’t have a background in art,” she says, but that hasn’t inhibited a lifestyle of artistic expression. “I’ve been a hairstylist for almost eleven years now, and that career is definitely creative!”

With more than 145,000 followers on Instagram — and that number is growing fast — Beckman regularly scores thousands of “Likes” on each of her posts. But she says it’s still something she does outside of her day job. Making witty cartoons about bugs has become part of her daily schedule. “I get up, I make coffee, and I think about bugs.” Even though it’s not her full-time occupation, Beckman takes her work seriously. “So Fly Taxidermy is definitely a part of my life here in Bloomington,” she says.

Beckman provides bright, uplifting, often humorous content to her audience every day. Her main goal “has always been to make people laugh and see the beauty insects bring to our world,” she says. But her cartoons are not all on the completely silly side. Often, Beckman addresses topics like the passage of time, mental health, self-confidence, love and lust, and even global pandemics. Most recently, she says she wants to “ampli-FLY black voices” by posting work by Black artists on her So Fly Taxidermy account. 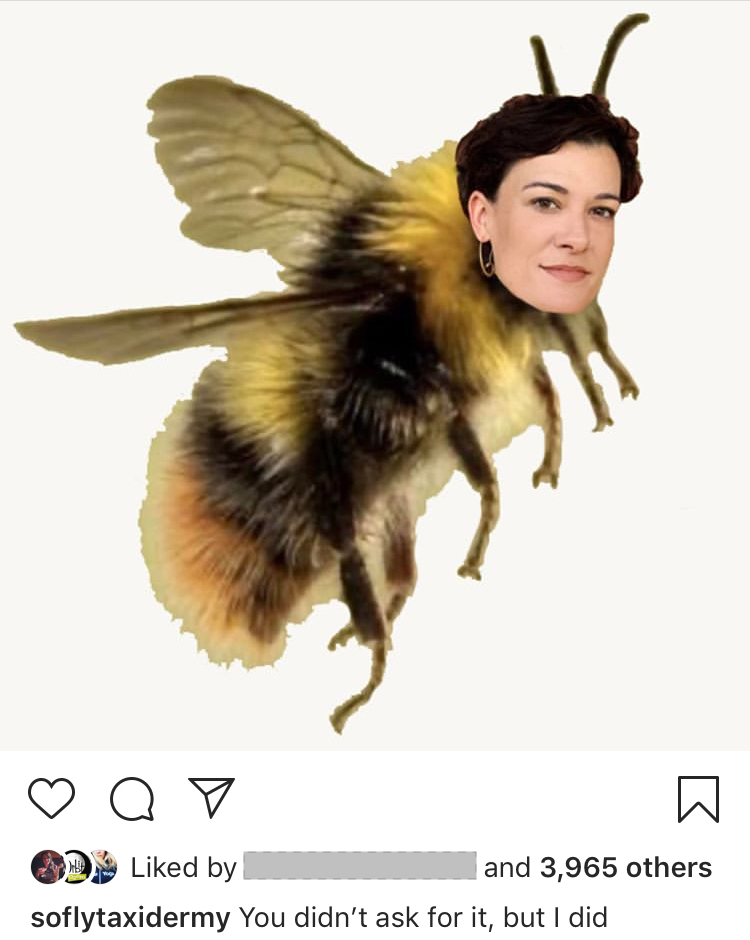 Beckman as a bee. | Courtesy photo

Beckman’s posts are often thought-provoking, heartwarming, gritty, and tummy-tickling. And So Fly’s popularity is increasing. Part of the reason, she believes, is because “it’s never really been done before.” The marriage of hand-drawn doodles with dead bugs, bright flowers, and clever captions fills a unique niche of entertainment. But the message in her art is what sustains it.

“Drawing, in the last few years, has definitely been an outlet for me,” Beckman says. Her cartoons transcend the catharsis of their creation; they make you blush, they make you think — but mostly they make you smile.

Beckman is often asked how she acquires her bugs. Though she has been accused of murdering insects for her project, she maintains sustainable, ethical collection practices, she says. “I use insects that have been found dead, given to me, or purchased dead.” Her Instagram account clearly states: “Not a bug murderer.”

Beckman has received “a scorpion from Arizona, flies from all over the United States, moths from Washington state to Kentucky.” She describes the audience she has built on Instagram as a “community of bug lovers and an army of entomology enthusiasts.” They support So Fly Taxidermy by dropping Likes and, on occasion, mailing Beckman a dead bug.

So Fly Taxidermy’s influence goes far beyond Instagram. Beckman’s work has been noticed by publishers and insect advocate groups, and together they’re bringing Beckman’s message to the offline masses. 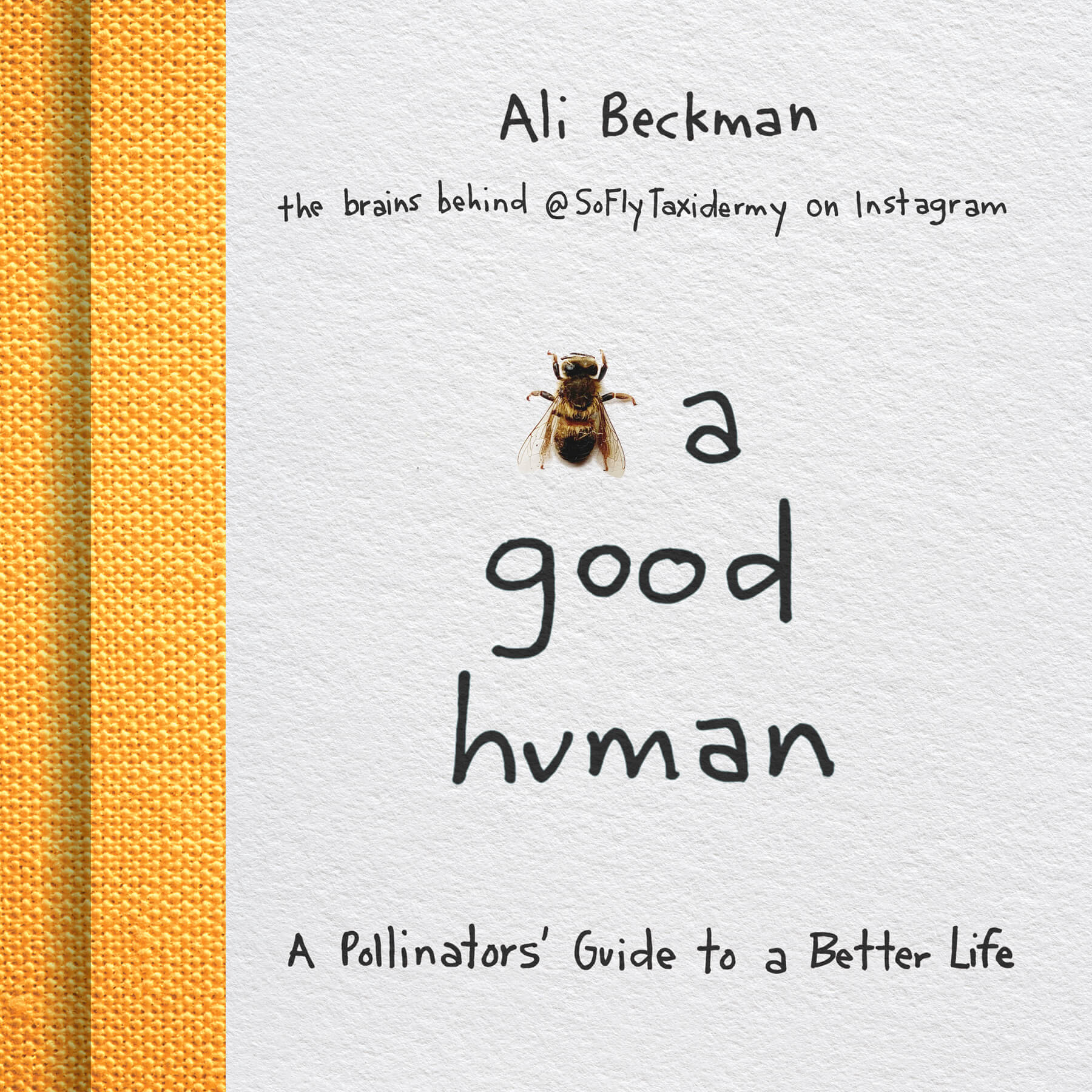 Beckman’s book, ‘Bee a Good Human: A Pollinators’ Guide to a Better Life,’ is being published by Red Lightning Books, an imprint of Indiana University Press, and will be available in 2021.

“Recently, a local publisher, Red Lightning Books, reached out to me and I got a book deal!” Beckman says. The book, Bee a Good Human: A Pollinators’ Guide to a Better Life, will be published in May 2021 (and can be preordered now on Amazon). It will include illustrations that have never been published online. “[It] is formatted like a coffee table book,” Beckman says. “It will be set up kind of like Instagram: caption on one page, picture on the next.”

This book deal is a big leap for Beckman, and both she and Red Lightning Books are enthusiastic about the project. But Beckman says it hasn’t changed the way she thinks about So Fly Taxidermy, and she suspects it won’t change the way she runs her account. “I checked with [Red Lightning’s] marketing team to make sure I could still do what I’ve always done,” she says. “And they were all for it.”

Rachel Rosolina is the marketing and publicity manager of Red Lightning Books. “We are all quite excited about Ali’s book,” she says, “because not only does she humorously use insects in relatable, everyday situations, but she also speaks to the importance of pollinators — and all bugs — in our ecosystem.”

“When I first encountered Ali’s work, I was greatly entertained by her humor and wit,” says Anna Francis, assistant acquisitions editor at Red Lightning Books. “But Ali uses her talent to do more than entertain — her amazing taxidermic creations make the threat to pollinators and our environment personal and immediate. It’s a fun and provocative book.” 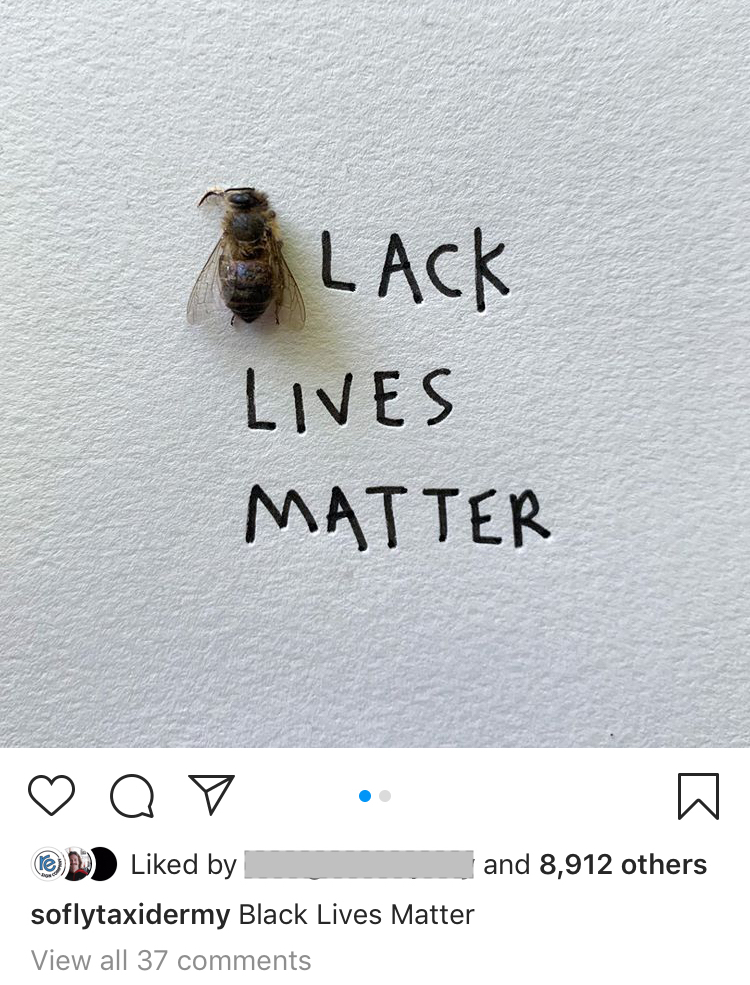 Beckman’s book of buggy comics will have a foreword from Kate Franzman, founder and head beekeeper of Indianapolis-based pollinator advocacy group Bee Public, which strives to make “Indianapolis a more bee-friendly city through responsible beekeeping practices, education, and community outreach.”

“Ali’s work primarily exists on Instagram,” Franzman says, “and that’s how we originally connected.” Franzman explains that Bee Public does “a lot of awareness raising via social media” and that she was “immediately struck by [Beckman’s] work with deceased insects.” Franzman was drawn in by the fuzzy-bummed bumblebees, but she stuck around for the uplifting humor and positive messages. So Fly Taxidermy is “funny has hell,” Franzman says, but she recognizes the seriousness in Beckman’s work.

“She began using it as a platform to raise awareness about the importance of pollinators,” Franzman continues. “Anthropomorphism, assigning human qualities to the natural world, is often discouraged by biologists, but I can see the value, both in Ali’s work and my own, in its power to spark empathy.”

So Fly Taxidermy isn’t heavy handed in its advocacy. Beckman is obviously pro-bee, but she doesn’t sting you with it. She just draws cartoons.

And Franzman knows that that’s what makes Beckman’s mode of expression so impactful, especially to the bug community. With an upcoming book about bugs, a growing fanbase on Instagram, and plenty of support from both her online and local communities, Beckman doesn’t plan on stopping anytime soon. So Fly is buzzing, and Franzman knows this is good business for the bees. “If the fact that pollinators are responsible for a third of the food we eat doesn’t move you to action,” she says, “maybe a hilarious comic about two bees getting drunk on nectar will.”