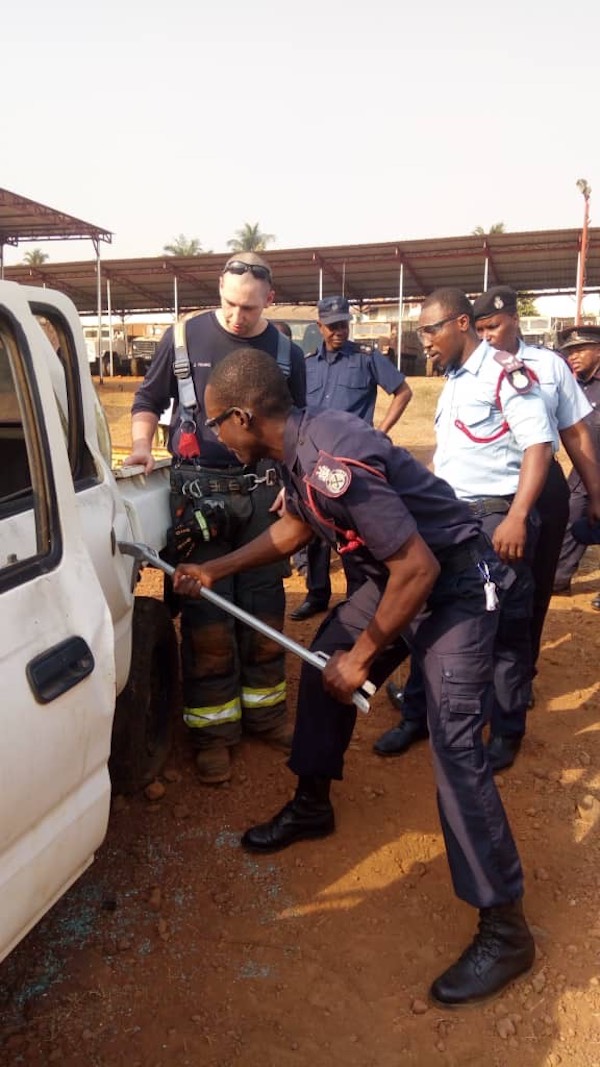 Last summer, I traveled from my home in Sierra Leone to Bloomington to participate in the Indiana University Mandela Washington Fellowship, the flagship program of the Young African Leadership Initiative (YALI). During one of the program’s networking sessions in the Council Chambers at Bloomington City Hall, I met Chief Jason Moore of the Bloomington Fire Department (BFD), who was part of the panel of civic leaders and public servants who were invited to talk about civic leadership. Chief Moore and I exchanged contact info.

From that moment to when the firefighters came to Sierra Leone, everything happened so fast and smooth. The Minister of Internal Affairs in Sierra Leone, Edward Soloku, offered to give visa waivers to the five Americans who visited: Chief Jason Moore, Captain Max Litwin, Fire Prevention Officer Tom Figolah, firefighter Jonathan Young, and firefighter Al Saccoh. The coordination went well in terms of writing the work plan and scheduling meetings with organizations like the United Nations Population Fund, eHealth Africa, Sierra Leone’s Office of National Security, and the Parliamentary Committee on Internal Affairs that were instrumental to the success of the project.

According to Chief Moore, the synergy between these groups showed that the project was destined to happen. Everything happened fast, thanks to YALI’s Reciprocal Exchange program for being the powerful force that created a lasting bond between two firefighting services.

In 1996 during Sierra Leone’s 11-year civil war, I escaped a fire that left two of my relatives dead. So an opportunity like this was very personal to me. I found an ally in YALI, not only for the help in making the BFD trip possible but also for years to come. Their passion to help and the trauma I experienced at an early age brought us together. And throughout the process, I have seen that passion exhibited in ways that are hard to forget.

The Bloomington firefighters arrived in my West African country on February 1, 2019, and planned to stay in Sierra Leone for a week of training. It was a hectic but quite fulfilling week. I was surprised at how quickly the Bloomington firefighters adapted to how things are done in Sierra Leone. One instance was how they got used to counting piles of Sierra Leonean money to pay for things (as of this writing, one U.S. dollar equals 8,875 Sierra Leone leones, our currency). This was different from when I travelled to Bloomington — I confess that it was difficult for me to get used to counting the American pennies!

But the most touching moments were the amount of love, passion, and understanding the Bloomington firefighters showed to the firefighters in my country, to people at the hotel where they were staying, and to other people they met. It was like they understood what Sierra Leoneans have lost through the 2017 mudslide, the Ebola outbreak in 2014, and the civil war that lasted from 1991 to 2002. 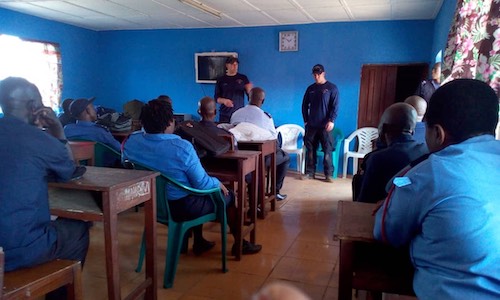 The Bloomington firefighters and I met with government ministries and agencies on disaster management, where they stressed the need for collaboration and prioritization of the fire force. And both Minister Soloku and Honorable Member of Parliament Alusine Kanneh, who heads the Committee on Internal Affairs, said the meeting helped them identify that more attention and funds are needed for the fire force to perform better.

Finally, because the project was such a success, all parties involved say they benefitted from the project. Chief Moore in his final statement said that the Bloomington Fire Department has changed forever just by participating in this initiative: “We are changed by the experience of meeting people who despite their hardship are happy and wanting to make things better, and I am humbled by the dedication and spirit of our fire brothers and sisters in Sierra Leone who strive to fulfill an honorable mission.” I think this has certainly been a huge transformation for the Sierra Leone Fire Force. 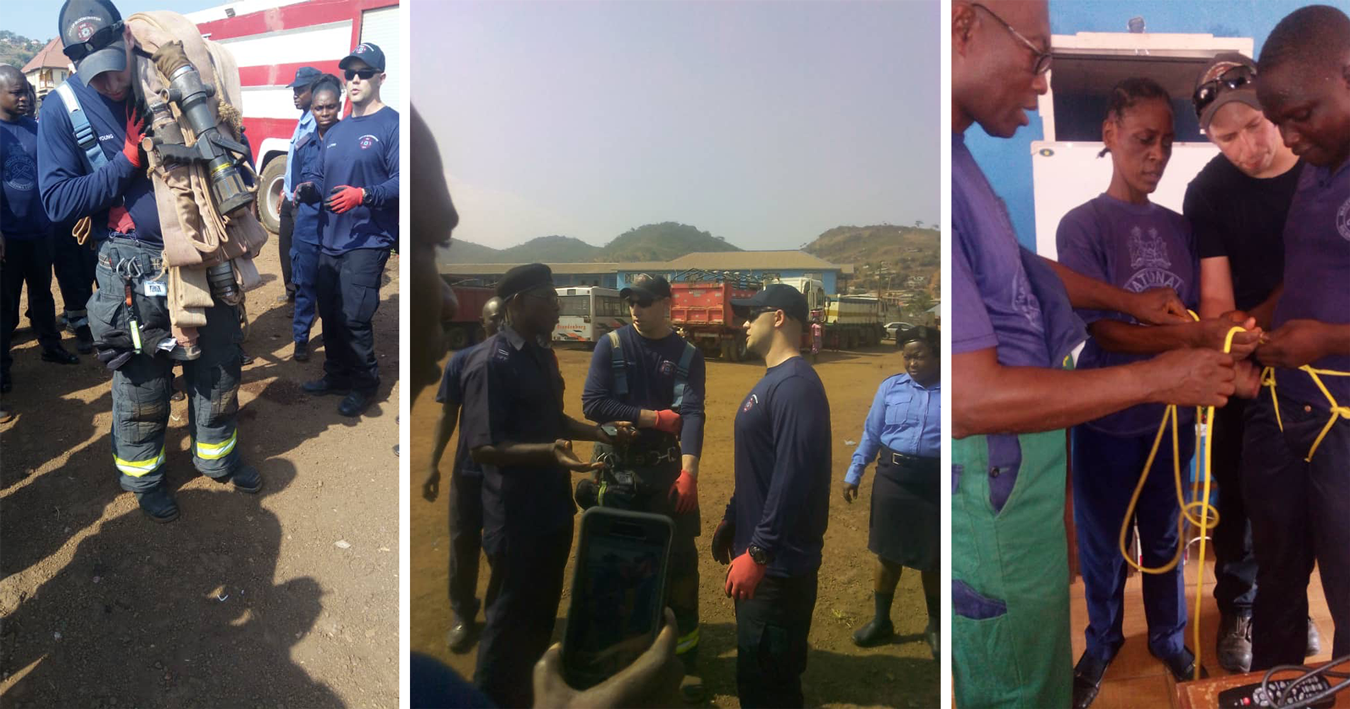 The initial visit to Sierra Leone allowed the partners to identify challenges and ways to mitigate these challenges. The next step of this partnership will be more focused on capacity-building of firefighters in Sierra Leone. They are even planning a trip for April 2020 to get four firefighters enrolled in firefighter recruiting school in Bloomington, and to get international certifications as fire investigators, fire-prevention educators, and emergency medical technicians. While the cost of training is budgeted at $265,500, BFD is helping to raise funds for their transportation, housing, and food (about $15,000).

The relationships created within this short period are strong enough to stand the test of time. I’m looking forward to partnering and working with more Americans who are experienced on issues that I’m passionate about. The YALI Reciprocal Exchange grant brought to life good initiatives that will benefit firefighters in Sierra Leone, the Bloomington Fire Department, and citizens of my beloved country.

Editor’s note: Chief Jason Moore says the cost of the trip to Sierra Leone was $12,750 and funded primarily by a grant from the U.S. Department of State, administered by IREX, with additional support from the Community Foundation of Bloomington and Monroe County, as well as from fundraisers.

When asked followup questions for this article, Chief Moore added the following comments in an email to Limestone Post:

This trip was eye opening in many ways. We met some of the happiest people in the world.  Everyone was open and accepting of not only our help but our questions needed to develop a comprehensive assessment of the fire force. This has helped our members and department by exposing us to the waste and inefficiencies within our department. Specifically, it has made us reconsider how we handle the disposal of equipment that is deemed unusable by U.S. fire service standards. The equipment available to the Sierra Leone Fire Force is in disrepair to the point where they would see a major improvement if we donated or sold equipment that no longer meets our standards. Our fire gear, even if it appears to be in prime condition, has a maximum life span of 10 years. Compared to having no equipment, our old equipment would provide a superior level of protection. In addition, it has exposed us to new cultures, helped to develop the foundations to increase our diversity/inclusion, and established a relationship to a department who has a lot of passion.

The entire trip became a reality because Eastina had the courage to ask “What can you do to help the firefighters in my country?” Her spirit and commitment to helping her country was something we saw in a lot of the people we met. Compared to the generalization of America’s “What’s in it for me?,” this was refreshing and truly reminded us to be proud of what we have.

Eastina Marian Boimadi Taylor, from Freetown, Sierra Leone, has more than nine years’ experience working in mainstream media and media development. At BBC Media Action-Sierra Leone, Eastina produces and presents radio programs on youth issues and reducing the malaria rate in Sierra Leone. She is also the founder and coordinator of the Shaping Young Minds Initiative Academy, which focuses on changing the mindset of youth and positioning them to pursue leadership positions. Since completing the Mandela Washington Fellowship at Indiana University in July 2018, Eastina has returned to Sierra Leone to put what she learned into practice.
Tagged
Comments