Originally published in the Greene County Daily World and online at gcdailyworld.com. 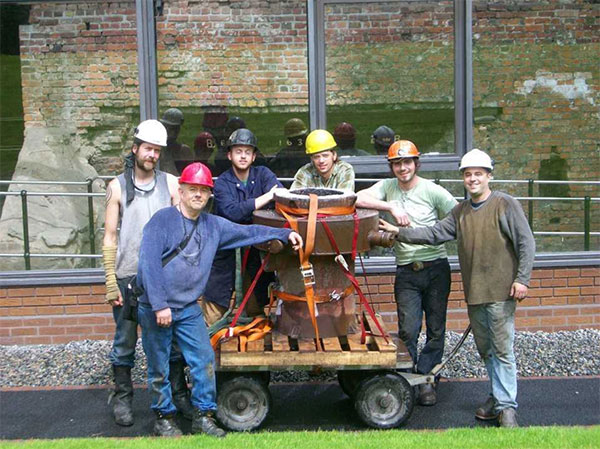 Iron casting crew in front of the historic Telford furnace in Coalbrookdale, England, at the International Conference of Contemporary Cast Iron Art 2009. From left, Chris Johns, Rick Batten, Will Vannerson, Nate Hensley, Chris Gerber, and Gerry Masse. The crew stands with Lady Dianne, the furnace they built, now in use at Sculpture Trails Outdoor Museum in Solsberry. | Courtesy photo

Gerry Masse, owner and founder of Solsberry’s Sculpture Trails Outdoor Museum in Greene County, recently heard from an old friend in an unconventional way. In the 1990s, Masse was in college and had yet to learn the ins and outs of casting iron. Then he met Rick Batten.

“Rick Batten taught me everything I know,” Masse said. “He is one of the three main people who shaped what Sculpture Trails is today. I learned from him for years.”

Batten, born in Pennsylvania, spent a significant part of his life in Florida, where he studied technical skills including material fabrication, aviation maintenance, and metal foundry. By the ’90s, Batten had become the first metal caster and artist-in-residence at the legendary Sloss Furnaces in Birmingham, Alabama.

Sloss Furnaces, founded in 1880, was in operation producing iron until 1971. Now, the 32-acre blast furnace facility is a National Historic Landmark, offering workshops, exhibitions, and conferences on metal and metal arts, including casting, welding, and blacksmithing.

“Rick and I probably cast around 200,000 pounds of metal together,” Masse said of his years working with and learning from the metal master. “He is best described as a curmudgeon,” Masse said with a laugh. “He had this hair that stood up all over his head, mad-scientist style, and he always said he knew the furnace was ready when his hair started smoking.” A group of artists — led by Batten and Jack Gron and including Masse, Casey McKinney, Ryan Goff, and Bill Rainey — built one of the Sculpture Trails’ two furnaces, Lady Roy, together in England during the summer of 2001. 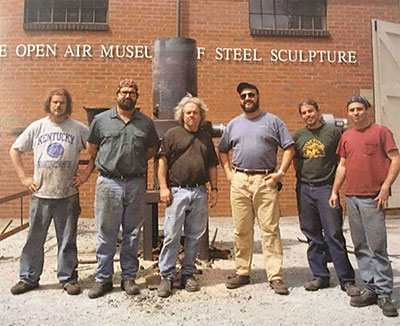 Lady Roy is named for the late Roy Kitchin, a British sculptor and art educator who, with his lifelong partner Pam Brown, co-founded the 10-acre Ironbridge Open Air Museum of Steel Sculpture at Coalbrookdale in Shropshire, England. Kitchin passed away in 1997. 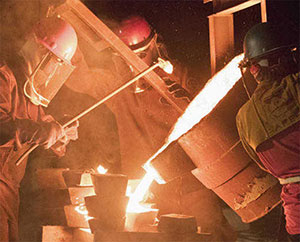 Nine years ago, Batten moved to Poland and continued to teach students with a passion for metal arts.

“He loves it there,” Masse said. “He fell in love, has a family and a full life. We keep in touch and he has helped out the Trails immensely.”

Batten continues to support the Trails, most recently with the help of Marvel Studios and their new release, Black Panther.

“Last year, I got a call from a number I didn’t recognize and I figured it was a sales call, so I didn’t answer,” Masse explained. “They called again and left a message that said ‘check your email,’ so I did. The email explained Marvel Studios needed to wrap up the rights to use a sculpture by Rick Batten that appears in the film. They tracked Batten to Sculpture Trails by association, contacted him and wanted to send him $2,000 for the right to use his sculpture in the movie.”

When Batten relocated to Poland, he had sold many of his pieces to an Atlanta set company, who would rent these and other pieces to production companies for use while creating sets for filming. 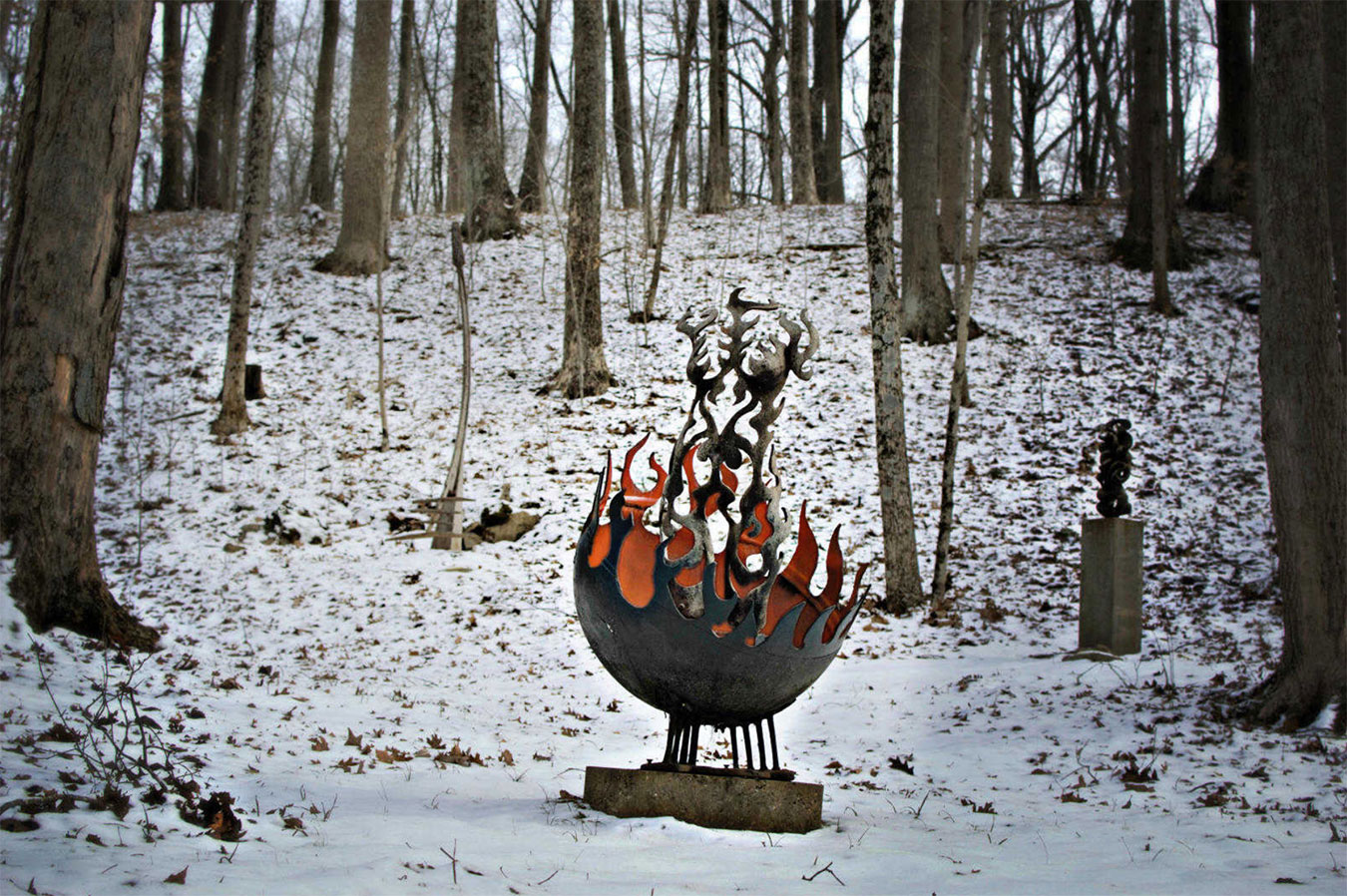 “His [Batten’s] sculpture appears very briefly in an airport scene,” said Masse. “And they couldn’t release the film until they had paid the artist. Rick Batten’s bookkeeping team refused the payment because he would have had to pay about $100 or so just to get through international red tape.”

Batten had other ideas for the check. 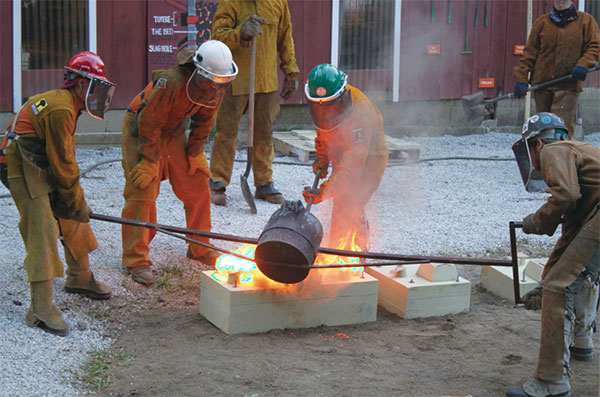 As a result of Batten’s generosity, Sculpture Trails will soon welcome the first artist chosen by Batten to its internship program.

“Jakub Cmarko is a young artist who lives and works in Banska Bystrica, Slovakia,” Masse said. “We are looking very forward to working with him this summer.”

From a brief flash of the art of a mentor and friend, the education of a young artist living 4,500 miles away is secured.

“Stranger things have happened,” Masse said with a laugh. “I suppose.”

Patti Danner relocated to Greene County, Indiana, from Seattle, Washington, in 2001, after meeting a gorgeous Hoosier on eBay. They married on Halloween 2004 and reside in Linton with two cats. She has been writing professionally since January 2016 as a staff writer for the Greene County Daily World. She loves to tackle a good feature and has been known to include as many puns in a story as she thinks she can get away with. Her hobbies include abstract drawing with brightly colored markers, starting home improvement projects she sometimes doesn’t finish, and complaining about the Midwestern weather.
Tagged
Comments