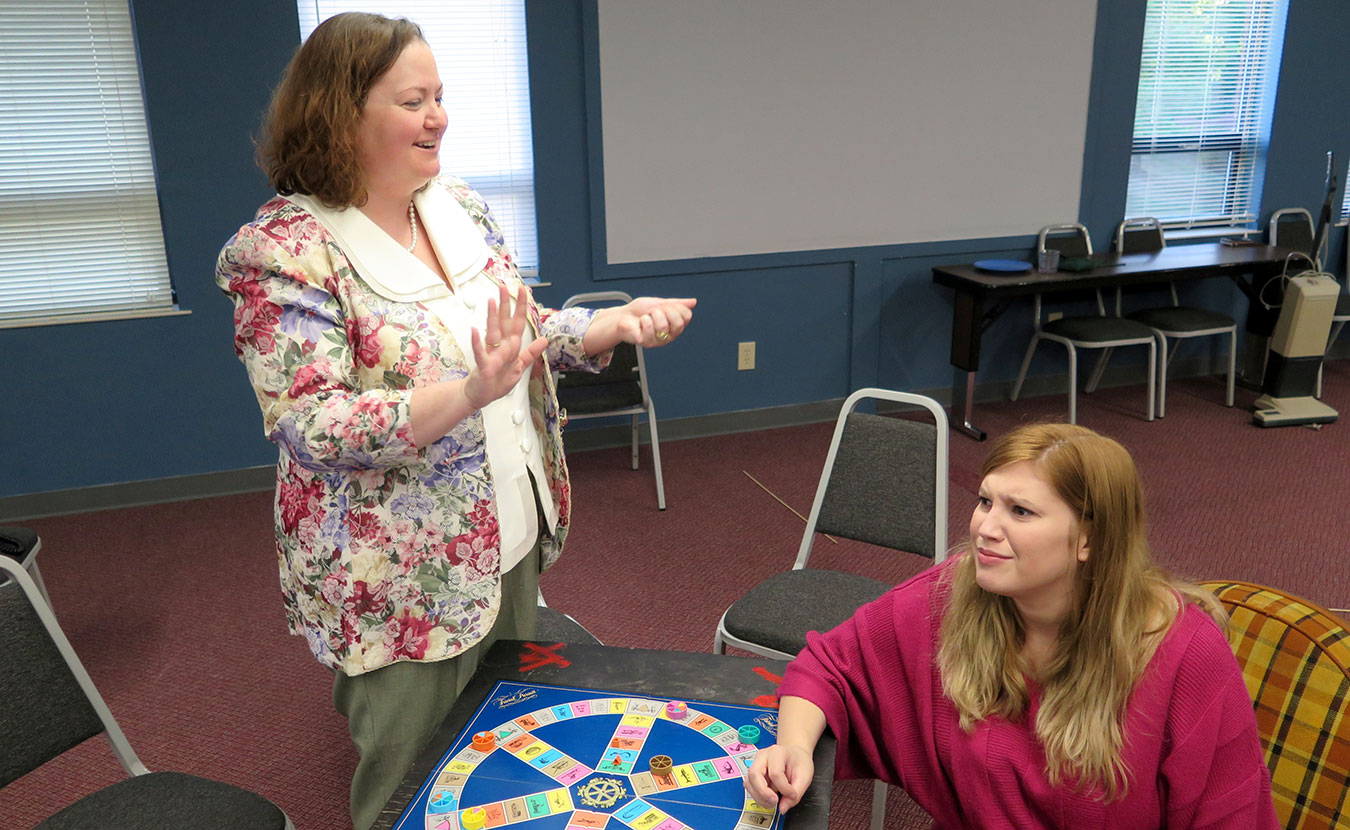 Emily Bedwell and Sarah Mae Ruggles have both loved theater from an early age. This love drove each of them to become part of the Monroe County Civic Theater (MCCT), where, 11 years ago, they met and became best friends. They have experienced a lot together since then: adventures and laughter, fights and forgiveness, and lots and lots of theater.

Not only do the friends star in MCCT’s production of Neil Simon’s The Odd Couple (Female Version), which plays September 15-17, but they are the reason for its inclusion in the MCCT season. The board game “Trivial Pursuit” plays a major role in the production. | Limestone Post

“I was, legit, sitting at home watching the current TV version of the Odd Couple,” says Bedwell, “and I texted Sarah, saying, ‘We should totally do The Odd Couple someday. It would be hilarious!’” Ruggles loved the idea.

Bedwell and Ruggles had always wanted to do a show together, but they never had the opportunity to play in major roles opposite of each other. As they researched play options, Bedwell found that Neil Simon actually wrote a female version of his famous play.

Unlike many other theater organizations, anyone, regardless of experience, can propose an idea for a show at MCCT. Bedwell and Ruggles created a proposal, and now the idea that started as a joke has become a reality.

In The Odd Couple, Ruggles plays Olive, the female version of Oscar. Olive is a successful TV producer with an uncanny knowledge of sports trivia, a biting and sarcastic wit, and an extreme tendency toward messiness. Bedwell plays the obsessively clean and neurotic Florence, the female version of Felix. After her husband decides to leave, Florence moves in with Olive, and the laughs never stop.

While friendship chemistry does not always translate to onstage chemistry, Ruggles and Bedwell bring each other and their characters to life. They have a wonderful sense of humor and comedic timing. “I think it comes from being able to really trust who you are on stage with,” says Bedwell. “And just knowing each other so well helps us bring out the best in each other.” Bedwell says Ruggles gives an underlying softness to what could be a hard, bristly, and angry character. “What Sarah brings to Olive is a sense of comfort,” says Bedwell. “She’s not messy because she is lazy. She’s messy because she is comfortable in her life. She has made the choice of what matters to her, and what matters to her is her job and her friends — not keeping her house spotless.” Ruggles, left, and Bedwell are playing major opposing roles together for the first time. | Limestone Post

In many ways, Bedwell understands Florence on a fundamental level. “I’m a bit OCD myself,” she says, laughing. “I just hope that I’m a bit more even-tempered than Florence in real life.”

Perhaps because she can identify with Florence’s neurotic behaviors, Bedwell offers a likability to a grating character. “Emily makes her such an interesting character,” says Ruggles, “that, even though in real life I would hate her, in the show I love her because of who Emily is and how she has portrayed her. I don’t know if I could have made her so loving.”

Despite their varying levels of stage experience, the cast comes together nicely, interacting as if they were actually lifelong friends. “The whole group has been relaxed and teasing,” says Ruggles. “It’s brought a lot of life to the stage.” The Odd Couple is a chance for I. James Torry to try something new as well. For The Odd Couple, he cast off his usual role as actor to direct his first full-length production as head director. Torry has had some directing experience in the past, as an assistant director for the Bloomington Repertory Theater and a director of a short for a Bloomington Playwright’s Project fundraising event, The Ike and Julie Arnove Playoffs.

“MCCT allows anyone that has a love, a passion, and interest to try,” says Torry. “That doesn’t mean you are guaranteed a role — there is competition — but MCCT offers something other organizations don’t. It’s inviting for people that want to explore different aspects of the theater process.”

By staging a play about the challenges and rewards of being close friends, Bedwell and Ruggles are able to celebrate their own friendship, which began many years ago on the stage. The civic theater experience has enhanced their relationship and helped introduce them to new friends, their current cast-mates. The production celebrates the community-building aspects of civic theater and shows that “at the end of the day, the thing that matters are the people you have around you,” says Bedwell.

MCCT’s hilarious, female version of The Odd Couple will be performed at the Ivy Tech Waldron Arts Center Rose Firebay, with evening shows on September 15 and 16 and a Sunday matinee on September 17. Tickets are $15 for adults, $12 for students and children. To find out more information about The Odd Couple or any of MCCT’s performance opportunities, you can visit their website or Facebook page.