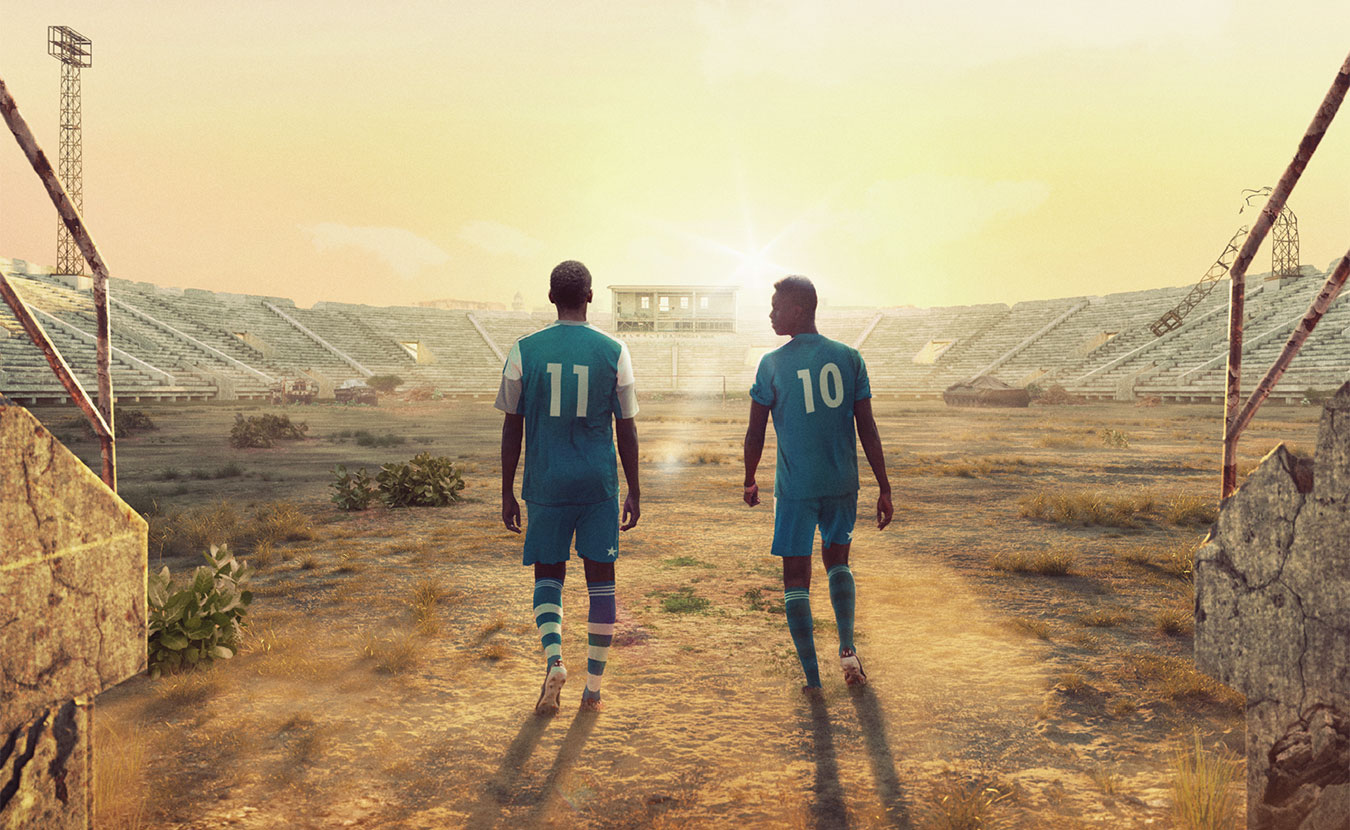 The film "Men in the Arena," showing in Bloomington at the Buskirk-Chumley Theater on October 26, documents two young Somalis who play on the national soccer team of their war-torn country. | Image courtesy of "Men in the Arena"

Not afraid to hide her passion for soccer from anyone, Tyler Ferguson has developed a reputation as one of Bloomington’s biggest fans of the sport. Because of this, Ferguson wasn’t surprised when, two years ago, she heard from longtime friend J.R. Biersmith, who had been working on a documentary about Somali soccer.

The year before, in 2013, Biersmith had received approval from the head of the Somali Football Federation to travel to Somalia to find players for his documentary, Men in the Arena. He now needed Ferguson’s help in bringing two young Somali soccer players — Saadiq Mohammed and Sa’ad Hussein, who were 18 and 20, respectively, at the time — into the U.S. and onto the soccer field.

“Bierman’s family has essentially adopted these two men,” Ferguson says. “They don’t have any family, they don’t have any money. They’re living with his sister in St. Louis. She’s putting them through school, she’s tutoring them. It’s the craziest story.”

Saadiq and Sa’ad are at the center of Men in the Arena, director Biersmith’s debut documentary, which follows their lives as they chase their dreams to play soccer in the war-torn country.

Originally on rival teams, Saadiq and Sa’ad became friends when they joined Somalia’s national team. While filling out a background questionnaire for the film, Biersmith says, “Saadiq approached us and said his friend Sa’ad had a really difficult story and it was hard for him to write it all down. We could tell there was a meaningful friendship there — Saadiq spoke quite good English — and they just happened to be two of the best players on the team, so it was the relationship we decided to follow.”

Upon completing the documentary, Biersmith says, he was worried about the safety of Saadiq and Sa’ad due to terrorist threats in Somalia, and, after a lengthy immigration process, he was able to bring them to the United States. Saadiq is currently a student and playing soccer at Saint Louis University, while, in order to attend school, Sa’ad is working and taking English classes in St. Louis.

Two days before the Bloomington screening, on Monday, October 24, Men in the Arena will premiere at the Heartland Film Festival in Indianapolis. On Tuesday, October 25, the Indiana University’s men’s soccer team will play a home game against Saadiq’s current team, Saint Louis University.

Planning the film’s Bloomington screening the day after the IU vs. SLU game was no accident, Ferguson says. “Saint Louis University and Indiana have a great soccer rivalry,” she says. “So immediately, when the soccer schedule comes out, the first thing I do is find out when IU plays Saint Louis University.”

Over the years, Ferguson has coached for Bloomington High School North girls’ soccer team, founded the FC Grasshoppers youth soccer program, played on both recreational and semipro adult soccer leagues, and even spent time as a volunteer assistant with Indiana University women’s team. She says her competitive spirit has driven her to make this screening as successful as possible. She has organized and scheduled with the Buskirk-Chumley, managed advertising for the event on social media, contacted the university to get the word out to students, and called everyone she has ever coached or played with.

Biersmith says he was not surprised by the devotion Ferguson has put into the screening. “I want people to come and see what one person in a town like Bloomington can do for a film like ours,” he says. “She’s our Bloomington champion.”

The original inspiration for the documentary came after Biersmith heard a report on NPR in 2012 about al-Shabab (an al-Qaeda affiliate in Somalia) and their presence in the country. The report focused on a story in the book Decade of Fear: Reporting from Terrorism’s Grey Zone, by Michelle Shephard, about Ismail Khalif Abdulle, a teenager whose hand and foot were amputated by the radical terrorist group in a soccer stadium for refusing to join. That’s when Biersmith began researching the political climate in Somalia and Ismail’s tragedy, he says. “It made me think of the film adaptation of Black Hawk Down and our troops running back to Mogadishu Stadium.” But when reports started to appear that FIFA, the international governing body of football/soccer, was renovating another stadium, Banadir, for the Somali Football Federation, Biersmith became hopeful about traveling and filming there, adding, “I wanted to explore that further.”

One of the greatest challenges faced by Biersmith’s film crew was feeling safe and prepared enough to travel to war-torn Somalia, he says. “So you kind of get this emboldened feeling, like, ‘Oh yeah, I could do this.’ … But then you read that Doctors Without Borders had left. Even though the government was turning around, Doctors Without Borders said … they were leaving. So then this started to feel dangerous.”

Although the film largely focuses on Saadiq’s and Sa’ad’s personal journeys through soccer, Biersmith says the story widens and touches on Somalia’s political landscape, and he hopes audiences can try to see life through the eyes of an immigrant. “Because of where they are from,” he says, “because of everything that’s happening on the world stage, from the largest immigration crisis we’ve had since World War II to persecution and discrimination, and [to] see what America looks like through an immigrant’s eyes — it’s wondrous.”

Ferguson says if Biersmith hadn’t made Men in the Arena and brought Saadiq and Sa’ad back to the United States, terrorist groups would have wanted to make an example out of them due to their prominence as some of the top players in the country, and they could have ended up in jail, kidnapped, or worse.

Instead, Biersmith says, he hopes the young men become a symbol of hope for a new generation of soccer players around the world. “Every young kid has a choice: Do I pick up a gun or do I pick up a pen?” he says. “And if there’s a shining example of Sa’ad or Saadiq who have chosen to pick up a pen — or pick up a soccer ball — versus picking up a gun, I think that means something.”

Despite focusing her invitations to the screening at the Buskirk-Chumley on soccer enthusiasts, Ferguson says she hopes the audience will stick around and ask the filmmakers questions beyond the sport.

“The way I visualize it is as a big reunion,” she says. “I’m targeting soccer-loving people. The beautiful game is going to be the common denominator bond. That’s the bait. But then we’re going to hear this broader, bigger story about humanity that’s so much more important than the game. But sometimes, it’s something as simple as a game that can teach us a bigger lesson about life.”

TJ Jaeger is a reporter, writer, filmmaker, and musician in Bloomington. He worked as a writer for the Indiana Daily Student and WIUX while studying in the Indiana University School of Journalism and currently writes for NUVO. TJ has also worked on movie sets for The Good Catholic and Stardust and Moonbeams.
Lynae Sowinski